Christopher Steele will be grilled on Trump-Russia dirty dossier

Former British spy Chris Steele must reveal under oath if he knows who leaked his notorious ‘dirty dossier’ and if it was Senator John McCain, it was revealed today.

Mr Steele will also be asked how he checked lurid claims in the explosive 35-page file during a seven hour grilling in London within the next three weeks.

The dossier made headlines around the world with its wild claims Donald Trump ordered prostitutes to carry out ‘degrading sex acts’ including a ‘golden shower’ in a Moscow hotel while secretly filmed by the Kremlin’s secret police.

It also alleged Russia had been assisting Trump for ‘at least five years’ by sowing division in the US because Putin was ‘motivated by fear and hatred of Hillary Clinton.’

The former secret agent is being sued for libel by a Russian businessman who claims he was ‘smeared’ by the ex-MI6 officer.

Aleksej Gubarev is also suing BuzzFeed in Florida over its publication of the dossier, which alleged his company XBT Holding planted bugs, transmitted viruses and stole data from the ‘Democratic Party leadership’.

Mr Gubarev says the allegations are completely untrue and claims Steele had ‘done nothing’ to check it before he put it in the explosive document.

This week a British judge agreed Chris Steele should face seven hours of questioning about his dossier, which is expected to take place in private in the next three weeks.

Today court documents reveal the former MI6 officer will be asked who he shared it with and who he believes leaked it, including whether he thinks it was Senator John McCain.

He will also asked for names of people in America who asked him to dig up dirt on Donald Trump in Russia.

Evan Fray-Witzer, a Boston-based attorney for Gubarev, told Fox News today: ‘We expect that Mr. Steele will confirm that the allegations concerning Mr. Gubarev were unsolicited and that he included them in the dossier despite having done nothing to verify whether the allegations were true or not.

‘[Neither] Steele [nor] Buzzfeed did anything to figure out if the things they were saying about Mr. Gubarev were remotely true. That’s not journalism, that’s simply smearing someone’s reputation’.

But Mr Steele can refuse to answer questions on his sources because he fears they and their families could be jailed, tortured or murdered – and many of the questions will be sent to him in advance. 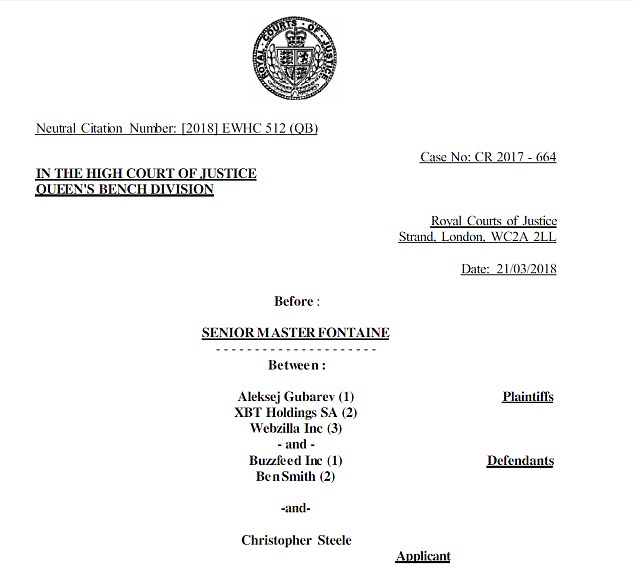 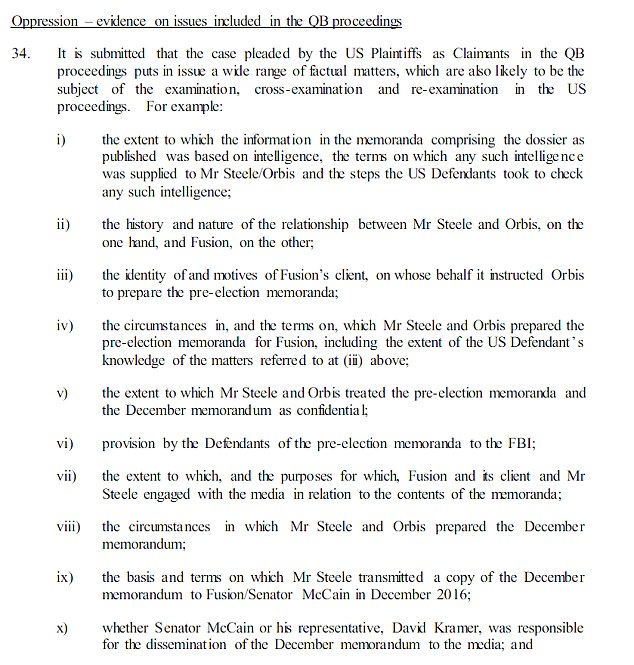 Court documents seen today shows the questions Aleksej Gubarev wanted to ask Mr Steele. These have been slashed back to protect sources 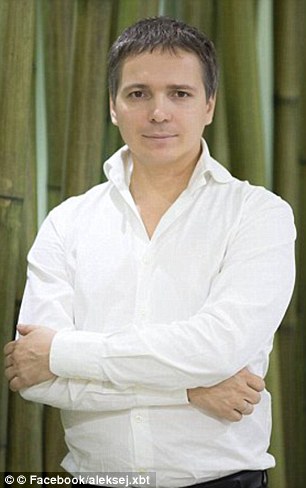 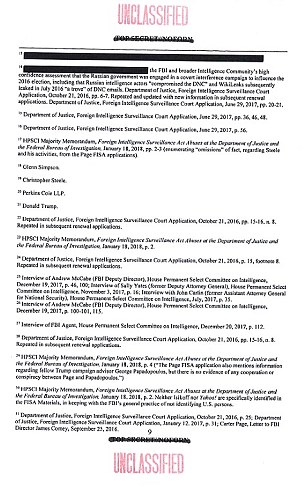 Mr Steele spied in Moscow in the 1990s and is believed to have been one of Britain’s most senior intelligence officers in Russia as the Soviet Union collapsed.

Revealed: The questions Chris Steele must answer under oath

Christopher Steele will be grilled under oath about his so-called ‘dirty dossier’ and who ordered him to wrote it and why.

Mr Steele worked for MI6 in Russia and is believed to have been a senior intelligence officer for 25 years.

Court documents have shown he will be asked to reveal:

But a judge has ruled he will not be asked about:

Sources claimed he also worked with Russian agent Alexander Litvinenko, the former KGB man was poisoned with polonium in London in 2006.

He faced constant monitoring from the Soviet Union’s feared secret police during his Moscow career.

The KGB once broke into his flat to steal his wife Laura’s high heels shoes before a state dinner and a Russian tank was once parked outside and its gun aimed directly at their home, friends have claimed.

After leaving the service he formed Orbis Business Intelligence, a London-based firm which gathers ‘strategic insight and intelligence’ for corporate clients, including helping the FBI uncover corruption at FIFA.

Steele’s work led to a lucrative deal to dig for dirt on Trump’s dealings with Russia, and he was paid Steele paid $168,000 by US-based company Fusion GPS.

Fustion had been paid $1.8million via lawyers representing the Democrats and the Hillary Clinton campaign.

Russian sources allegedly told Steele they had extensive material on the now President – including a secret film of him in the suite where President Obama stayed in Moscow, watching prostitutes committing degrading sex acts, specifically ‘golden showers [urination]’, on the bed where the president once slept.

Mr Trump later claimed ‘sick people put that c**p together’ and called the dossier ‘fake’ and ‘phony’, even suggesting that US secret services had leaked it to damage his reputation before his inauguration.

He debunked the ‘golden shower’ claim by saying: ‘Does anyone believe that? I’m a germophobe’.

The document also said Russia had been ‘cultivating, supporting and assisting Trump for at least five years’ because Putin was ‘motivated by fear and hatred of Hillary Clinton.’

When completed Steele sent his salacious file to Fusion by enciphered email in December 2016, with an instruction to Fusion to provide a hard copy to Senator John McCain, according to court documents.

Steele also handed it to a UK official, believed to be from the secret service, because he felt said his work had ‘considerable importance to the national security of the UK and US’ and his research ‘needed to be analysed further, investigated and verified’.

But weeks later the dossier was leaked to Buzzfeed, who published it in full, but where it came from has never been known.

Mr Gubarev’s lawyers will ask specifically whether Mr Steele, who must give evidence under oath, knows who did it. 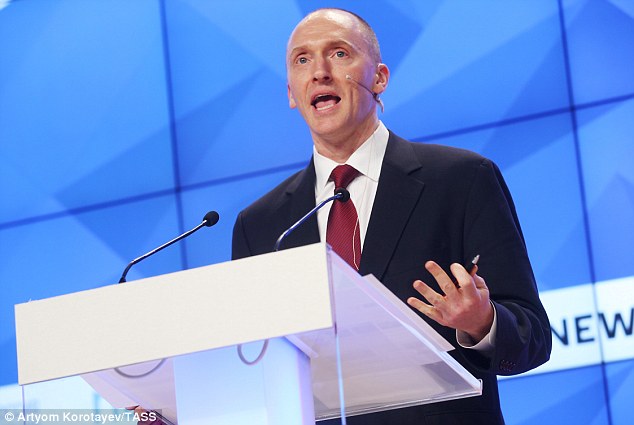 The FBI considered paying Steele for the ‘dirty dossier’ that was included in a warrant application to spy on former Trump advisor Carter Page (pictured), but did not

Last year Mr Steele fled his £1.5million Surrey mansion fearing for his life, and his family’s, and ‘remains horrified’ the document was ever published, Wednesday’s judgement says.

Lawyers for Christopher Steele had argued that the lengthy pre-trial questioning session could put potential intelligence sources at great risk.

He asked a High Court judge in London to set aside or vary an order she made in November for the examination to go ahead.

In a ruling made public on Wednesday, Senior Master Fontaine said that Mr Steele did have relevant evidence to give in the proceedings in Florida and that the order did not breach his human rights.

But she agreed that the original request from the US court at the behest of the plaintiffs went beyond what was required and that the order should be varied to offer further protection to Mr Steele.

The US litigation involves a defamation claim brought by Russian businessman Aleksej Gubarev against BuzzFeed Inc over its publication of the dossier.

The dossier consists of a number of memoranda produced by Mr Steele, who left the Foreign and Commonwealth Office in 2009, or his company Orbis Business Intelligence Ltd.

Lawyers for Mr Gubarev, who is also suing Mr Steele for libel in the UK, told the High Court that the scope of the questioning had been narrowed and would not seek to expose sources.

Senior Master Fontaine said it was an ‘unusual, and probably unique, case’.

Mr Steele was ‘in many respects in the same position as a whistle-blower’ because of the actions taken by him after the 2016 presidential election in sending part of the dossier to Senator John McCain and a senior government national security official, and in briefing sections of the US media, she added.

She considered that seven hours was an appropriate time for the examination and said that Mr Steele would have the protection of his own legal advisers to ensure that the hearing should involve questioning only on the ‘now very limited’ topics permitted.

The judge said it was not known who provided the dossier to BuzzFeed but Mr Steele’s evidence was that he was ‘horrified and remains horrified’ that it was published at all, let alone without substantial redactions. 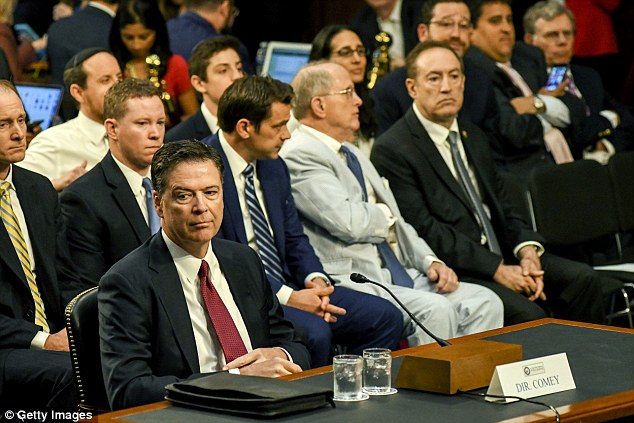 Steele was furious that then FBI Director James Comey (sitting left) reopened the Clinton email probe in October 2016, and leaked to the media in retaliation, a new memo claimed

She added: ‘He considers that this may have compromised the sources of his intelligence, putting their lives, their families and their livelihoods at risk.

‘He says that for former Crown servants with the experience and background of the directors of Orbis, such publication of such raw intelligence reports in this way is simply unthinkable.’

The judge said that she had done her best to balance the interests of Mr Steele with the requirements of the Florida court against the background of very unusual circumstances.

What was Trump ‘dirty dossier’ and what did it say?

The 35-page dossier on Trump caused an international scandal when it emerged just over a year ago.

It made unsubstantiated and far-fetched claims that the President watched prostitutes perform a ‘golden shower’ urination show in the Presidential Suite of a Moscow hotel and that the bizarre footage was allegedly held by the Kremlin’s blackmail unit.

The report states that in 2013 Trump hired prostitutes to urinate on the bed of the Presidential Suite at the Moscow Ritz Carlton, where he knew Barack and Michelle Obama had previously stayed.

It says: ‘Trump’s unorthodox behavior in Russia over the years had provided the authorities there with enough embarrassing material on the now Republican presidential candidate to be able to blackmail him if they so wished.’

Trump ridiculed the idea, pointing out that Russian hotel rooms are known to be rigged with cameras and describing himself as a ‘germophobe’.

The document states that Trump had declined ‘sweetener’ real estate deals in Russia that the Kremlin lined up in order to cultivate him.

The business proposals were said to be ‘in relation to the ongoing 2018 World Cup soccer tournament’.

The dossier claimed that the Russian regime had been ‘cultivating, supporting and assisting Trump for at least five years’.

According to the document, one source even claimed that ‘the Trump operation was both supported and directed by Russian President Vladimir Putin’ with the aim being to ‘sow discord’.

A dossier on Hillary Clinton

At one point the memo suggests Kremlin spokesman Dmitry Peskov ‘controlled’ another dossier containing compromising material on Hillary Clinton compiled over ‘many years’.

Elsewhere in the document, it is claimed that Putin was ‘motivated by fear and hatred of Hillary Clinton.’

Peskov poured scorn on the claims today and said they were ‘pulp fiction’.

At one point the memo says there were reports of ‘clandestine meetings’ between Donald Trump’s lawyer Michael Cohen and Kremlin representatives in August last year in Prague.

However, Trump’s counsel Michael Cohen today spoke out against allegations that he secretly met with Kremlin officials – saying that he had never been to Prague.

It has now emerged that the dossier was referring to a different person of the same name.