CHRISTOPHER STEVENS: If The Wheel was a board game, it would be in bits by Boxing Day

Board games are cancelled, by order of the fun police. Along with lethal activities such as indoor carol singing and passing a gravy boat around a dinner table seating many households, this Christmas we are forbidden from any pastime involving dice, cards or tokens.

Secretly, I am relieved. The ludicrous Covid laws mean we can avoid the rash of over-priced games based on telly shows.

The bestseller is Taskmaster: The Board Game, which uses videos starring the show’s Little Alex Horne to set daft tasks for players.

Strictly Come Dancing: The Board Game comes with its own glitterball and features the voice of judge Craig Revel Horwood. Not so much Fab-U-Lous as Fab-U-Lousy, dahling. 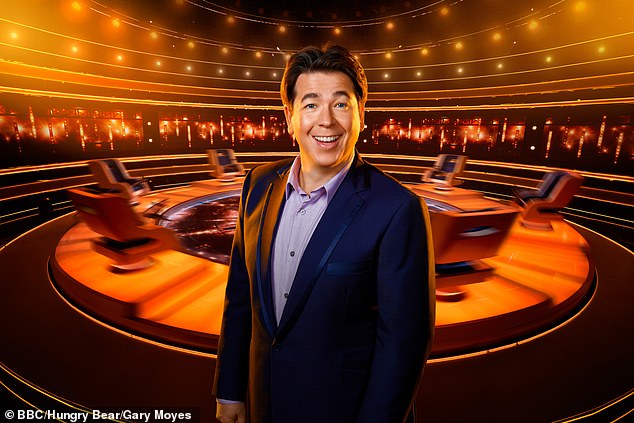 Michael McIntyre’s new Saturday night spectacular The Wheel (BBC1) looks like it was designed to be packaged with a gameboard and spinning plastic chairs, and sold in John Lewis for £24.99

Peaky Blinders: Under New Management is a strategy game for wannabe gangsters. Love Island: The Game pairs off players for ‘hot challenges’ (definitely not pandemic-friendly).

Countdown: The Board Game comes with a clock playing the tick-tock music . . . there’s no end to these cheesy spin-offs.

Michael McIntyre’s new Saturday night spectacular The Wheel (BBC1) looks like it was designed to be packaged with a gameboard and spinning plastic chairs, and sold in John Lewis for £24.99.

Six celebs sit in whirling bucket seats, whizzing around as if they are on a Waltzer at a fairground. Below the shiny stage, a smaller cogwheel rotates with three contestants.

One pops up in a cloud of dry ice, to be helped on questions by the famous guests. Every time there’s a wrong answer, a player vanishes to be replaced by another.

It is the sort of convoluted contraption that is guaranteed to be busted by the end of Boxing Day — which is not long enough to get to grips with the needlessly over-complicated rules.

For each round of questions, one celeb is the ‘golden’ expert. Unused celebs are ‘silver’ and their contributions can double a player’s winnings. All must jot down unseen answers to each question, and can be suspended from the game when they get one wrong.

Really, try explaining all that to a hyperactive seven-year-old after you’ve had three glasses of sherry.

Meanwhile, as the wheel spins, quizmaster Michael does his dance, the one that looks like a chubby policeman getting into the spirit of things at the Notting Hill Carnival.

Policemen have been given a harsh press in Steve McQueen’s Small Axe series of historic dramas, set in black British communities.

According to this version of the late 20th century, every white copper in the Met was a racist pig.

There must be many former officers who remember it differently, but no one is asking them.

Red, White And Blue (BBC1) told the story of Leroy Logan, a young black science graduate who decided to join the force at the start of the Eighties.

And that is all it did. There was no sub-plot, no depth to any other characters and no proper ending. 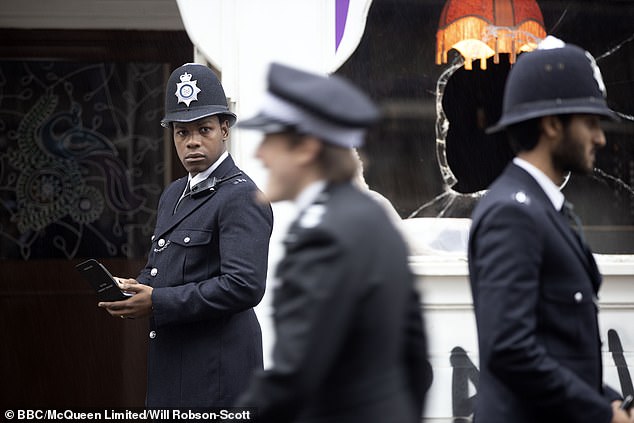 Policemen have been given a harsh press in Steve McQueen’s Small Axe series of historic dramas, set in black British communities. According to this version of the late 20th century, every white copper in the Met was a racist pig

John Boyega, an effortlessly charismatic actor, was great in the central role, but everyone around him was a cardboard cut-out.

There were a few good scenes — some filmed with flamboyant technical skill, such as the pursuit of a violent thief across a factory floor.

The depiction of basic training at Hendon was also absorbing. But this cinematic drama lacked the urgency needed for TV.

Otherwise, it was notable for the way it captured the look of the era, with swirling wallpaper patterns and authentic Tesco quilt covers.

A long shot of a scatter of starlings was a mistake, though. Back then, the flocks were dense clouds, numbering thousands of birds . . . not a mere 30.

Bits and bobs of the weekend: The salute to a catchphrase king, Dick Emery’s Comedy Gold (C5), was all talking heads and punchlines.

We did not see one full sketch. Telly chiefs always mess up these tributes. Dad . . . I fink they got it wrong again!