Blimey, rock royalty Elton John knows how to put mere commoners in their place. Graham Norton flew to the superstar’s home in the South of France for an interview, and barely got further than the front porch.

One minute Graham was bowling along the boulevard in Nice, at the wheel of a gold Rolls-Royce. The next, he was squashed into a cheap white armchair, almost knee to knee with Sir Elt, in the cramped corner of a sitting room.

And that’s all we saw of the house, on Elton John: Uncensored (BBC1). No ballrooms, no chandeliers and certainly no glimpse of the helipad where the songwriter welcomes the likes of Meghan and Harry for their holidays.

Graham flattered the old show-off senseless, going in to ecstasies about this year’s biopic Rocketman and the new autobiography, Me. Every weak joke or silly voice (Elton likes to embellish his anecdotes with impressions) was greeted with shrieks of laughter. 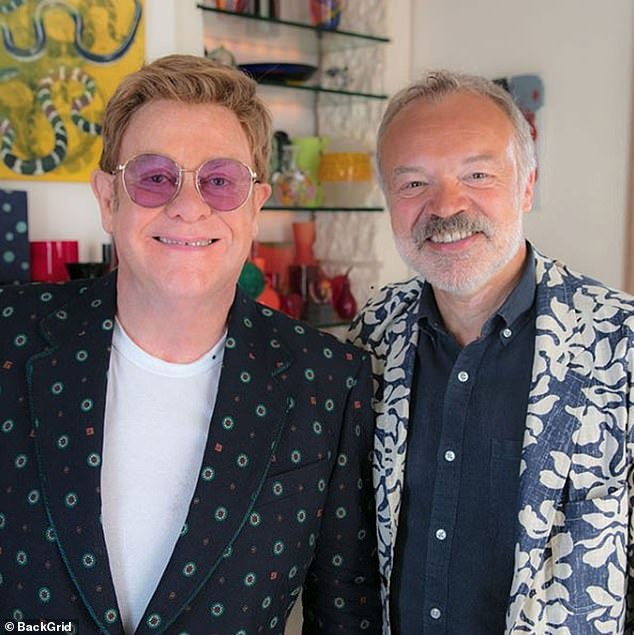 Graham Norton flew to Elton John’s home in the South of France for an interview, and barely got further than the front porch

But he got nowhere with all this buttering-up. The cameras were allowed into the house strictly on sufferance, while the star plugged tickets for his endless ‘farewell tour’. Incidentally, don’t feel too despondent if you fail to get a seat at any of the hundreds of shows Elton is planning over the next couple of years: he casually dropped into the conversation that, when the tour is finally over, he intends to play ‘residencies’, or strings of dates in one place.

He once sang ‘Sorry seems to be the hardest word’ but evidently the one he really struggles with is ‘enough’. Graham was obliged to keep the questions short, because Elton doesn’t relish the sound of anyone else’s voice.

The problem was that he’s told most of these stories so many times, the reminiscences were rushed and sometimes disjointed.

A couple of times, punchlines about stage costumes, or the time he put his wig on backwards, didn’t make sense until he went back and filled in crucial details that he’d forgotten to mention.

But the interview did come alive when talk turned to the singer’s addictions. He was incautiously candid about his drug use, and he dropped names the way he once popped pills: John Lennon, Freddie Mercury, Princess Di, Michael Jackson, Rod Stewart and Linda Lovelace got mentions, not all favourable. And it was clear that he had surprised himself with his capacity to love his two sons. ‘Originally I was going to die on stage,’ he said. ‘Now I don’t want to, I want to be with my kids.’

Sports spectacle of the night:

Siena boasts its famous horse race but, as chef Gino D’Acampo found on his Italian Express (ITV), nearby Asciano enjoys its own derby day…riding on donkeys. Gino, you could have just gone to Weston-super-Mare beach.

As in Elton’s own life, a piano is central to Tim Minchin’s road-trip sitcom, Upright (Sky Atlantic), which launched with a double bill. Minchin, a dazzlingly clever comic songwriter who might be far more popular if his humour wasn’t so aggressive and caustic, wrote and stars in the eight-part series.

He plays Lucky, a gaunt-eyed drinker who is trying to drive across Australia towing a piano, to see his terminally ill mother. His plans come adrift when, after mixing booze and medication, he crashes his car on a remote scrubland road.

His piano isn’t damaged, but the 16-year-old driver of the other vehicle is. She’s broken her wrist. Lucky offers to drive her to hospital…and from the moment he wrestles his seatbelt into place, we know they’re going to be stuck with each other.

If the idea isn’t too original, the dialogue is. It’s jagged, fast and unsentimental, with a tendency to spiral off into philosophical arguments.

Though it’s frustrating to see new comedy locked away on a pay-to-view channel, there’s no way the BBC would have made this show.