How To Make: The Toothbrush

Red Dwarf (Dave), the sci-fi sitcom that’s been running almost since the ­beginning of the universe, switched format to record a feature-length episode, a full two hours.

Even Dad’s Army couldn’t ­manage that.

And it was funny. Not just catchphrase funny, more than simply in-joke, fan-favourite funny, but loaded with some great gags.

I laughed out loud before the first line was even spoken, as we were transported aboard a spaceship piloted by half-feline humanoids in Star Trek costumes. With furry faces and whiskers, they looked as ridiculous as Judi Dench in Cats. Thank heavens they didn’t sing. 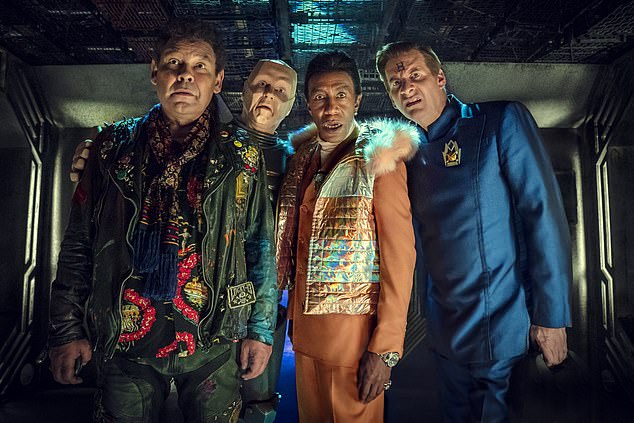 A door opened with that familiar swish of compressed air, the noise all doors make on movie spacecraft. A cat-human entered — pushing the bottom of the door up with its nose. Of course: alien cats need alien catflaps.

Red Dwarf has such a devoted audience that a made-for-TV movie could hardly fail. The show ran for ten years from 1988 on BBC1, before being placed (like its hero, Lister, played by Craig Charles) in suspended animation.

The Dave channel, recognising it had a fanbase as devoted as that of Doctor Who (which the show resembles in looks), revived it in 2012. Remarkably, all four of the main cast came back on board: not only Charles, who by then was a Coronation Street regular, but Chris Barrie as the prissy hologram Rimmer, Danny John-Jules as the supercool Cat and Robert Llewellyn as the apologetic robot Kryten.

Blow-out of the night:

Gordon Ramsay, Gino D’Acampo and Fred Sirieix tucked in to a lobster and beef burger, drizzled in 100-year-old vinegar, at the Paris Las Vegas hotel, on their American Road Trip (ITV). It cost $777 (£615). You want fries with that?

Red Dwarf succeeds because it never tries to be more than it was at the beginning: a smartly scripted bickering match between characters who are stuck together, apparently for the rest of infinity, loathing each other more every day.

Thanks to a fortunate quirk of scheduling, this makes it the flagship show for the lockdown.

And it’s practically unique in making the quantum leap to movie-length. In the Seventies, many popular sitcoms tried it: On The Buses, Steptoe & Son and even Dad’s Army were box office successes, but they weren’t a patch on the 30-minute episodes.

Most later comedies knew better than to think of trying it. Imagine Blackadder or Father Ted in the cinema . . . it just wouldn’t have worked. Red Dwarf: The Promised Land did it with panache, aided by some big-budget special effects that contrasted hilariously with the wobbly scenery. Filming in front of a live audience, Doug Naylor’s script showered us with so many gags that Charles almost corpsed (luvvie-speak for ‘broke down in giggles’).

On a good night for overgrown kids, Dr Zoe Laughlin explored the history and design of a bathroom staple in How To Make: The Toothbrush (BBC4). She did it with glee and gusto, thrilled to be let loose with a giant chemistry set in the studio.

Even if you don’t much care about how nylon is made, it was entertaining to see her excitement as she donned protective goggles to mix dangerous solutions in glass beakers, and somehow teased miles of plastic thread from the mixture with an electric drill.

At the end of the hour, though, she’d given up on trying to replicate the plastic bristles and flexible handle of a shop-bought toothbrush. Instead, she claimed a scrap of towelling sock on the end of a stick worked equally well. That’s not really a toothbrush . . . it’s a toothswab.

Dr Zoe ought to apply her enthusiasm to bigger projects. Give her a bucket of bolts, a lightning conductor and access to a warehouse full of discarded shop mannequins, and we’ll see what she can do. It’s a-liiive!