Senate Minority leader Chuck Schumer is calling on the FBI to review a Russian company’s smartphone app that transforms faces from photos into younger and older images of the person.

The New York Democrat said in a letter on Wednesday to the FBI and Federal Trade Commission that he’s concerned FaceApp could pose ‘national security and privacy risks for millions of U.S. citizens.’

The New York Democrat is asking the agencies to assess the situation and says he has ‘serious concerns’ about how long users’ data is stored and if it is deleted after usage.

Senate Minority leader Chuck Schumer, (pictured), is calling on the FBI to review a Russian company’s trendy smartphone app that transforms faces from photos into younger and older images of the person 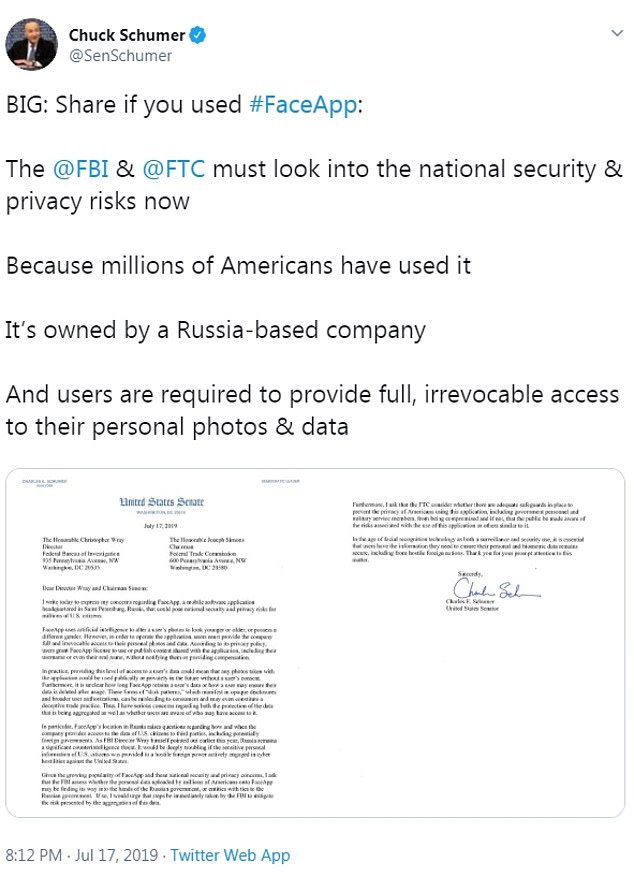 Schumer tweeted that the FBI and Federal Trade Commission must look into FaceApp as it is headquartered in Russia, amid concerns over the use of people’s data when using it

He says it would be ‘deeply troubling’ if sensitive personal information was provided ‘to a hostile foreign power actively engaged in cyber hostilities against the United States.’

Many popular apps collect user data, but concerns have circulated about FaceApp, which is developed in Russia by Wireless Lab.

FaceApp has gained renewed popularity in recent days as celebrities and public figures shared photos of themselves looking 50 years older thanks to an editing tool from the software developer.

But experts warned of security concerns with FaceApp, made in 2017,  which puts a filter over your face, as it has permanent access to your photos.

Concerns focus around a questionable clause in the app, which can access, store and use images from your camera roll, without your permission.

In light of the concerns, Chuck Schumer wrote in his letter: ‘FaceApp’s location in Russia raises questions regarding how and when the company provides access to the data of U.S. citizens to third parties, including potentially foreign governments.

‘Given the growing popularity of FaceApp and these national security and privacy concerns, I ask that the FBI assess whether the personal data uploaded by millions of Americans onto FaceApp maybe finding its way into the hands of the Russian Government, or entities with ties to the Russian Government.’ 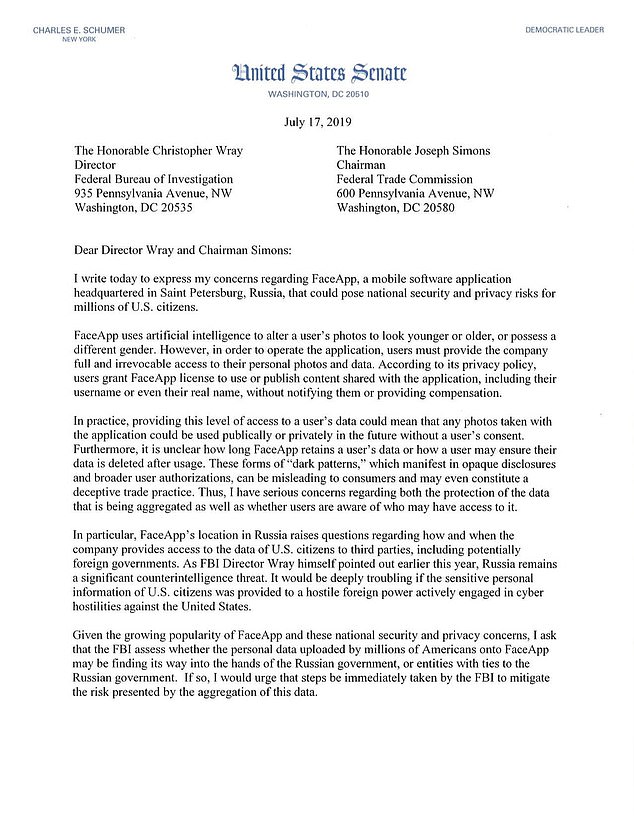 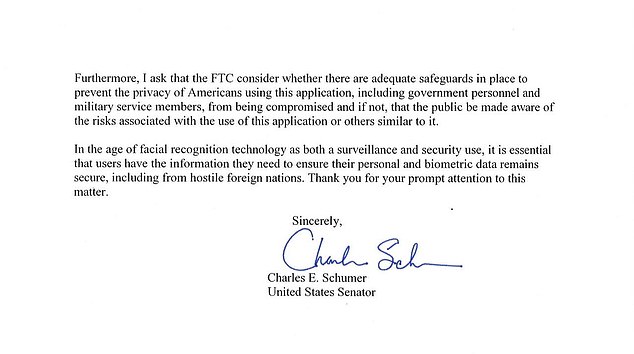 He claimed it remained unclear how long FaceApp retains a user’s data or that data may be deleted after usage, which he called ‘dark patterns’

He also requested that the FTC examine whether there are adequate safeguards in place to prevent the privacy of Americans using the application from ‘being compromised.’

He added: ‘In the age of facial recognition technology as both a surveillance and security use, it is essential that users have the information they need to ensure their personal and biometric data remains secure.’

He also claimed it remained unclear how long FaceApp retains a user’s data or that data may be deleted after usage, which he called ‘dark patterns.’

The free service uses artificial intelligence to edit a picture in your phone gallery and transforms the image into someone double or triple your age. 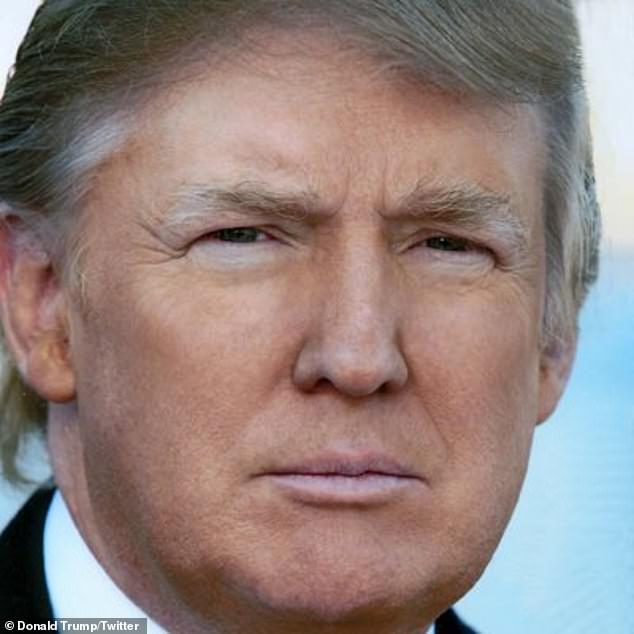 An image President Donald Trump uses as a profile picture on his Twitter account, (pictured), was given the FaceApp treatment 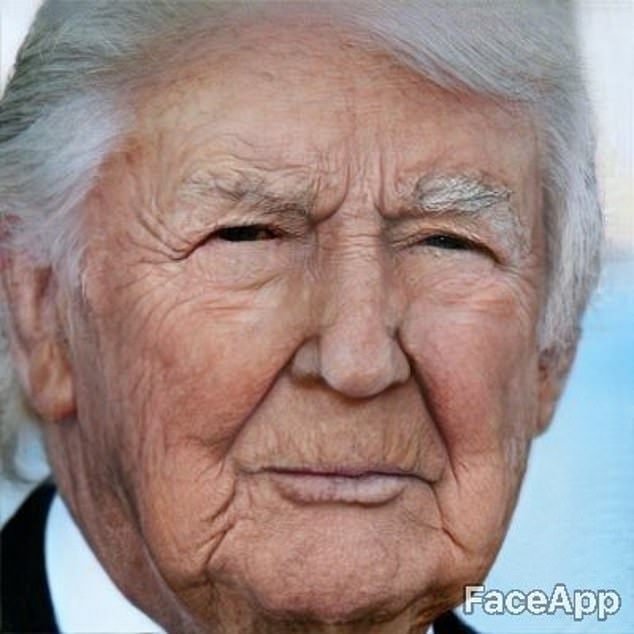 It can also change users’ hair colour, allow them to see what they look like with a beard, swap genders and even look younger.

FaceApp is currently one of the most downloaded apps for both iOS and Android, as #faceappchallenge posts have taken over social media.

The terms and conditions of the app essentially gives FaceApp access to use, modify, adapt and publish any images that you offer up in exchange for its AI.

FaceApp’s privacy policy also says it is using data from the app to serve targeted ads and to develop new products and features.

It says it does not sell data to third party apps, but lists many exceptions including one that allows it to share data after removing information that identifies users.

FaceApp, which is developed in Russia by Wireless Lab, has had surges of viral popularity before. 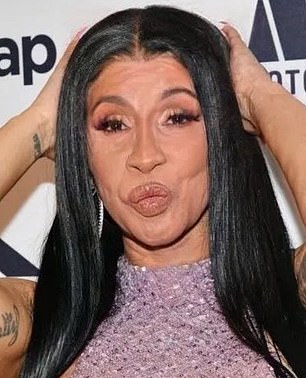 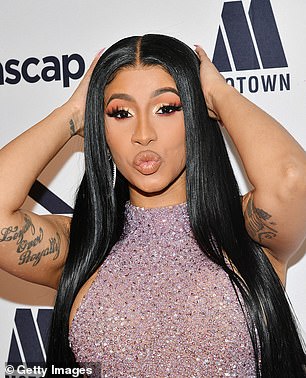 An image of Cardi B looking substantially older after using the FaceApp filter. Scores of celebrities have used the techonology, sparking concerns about users privacy and data retention 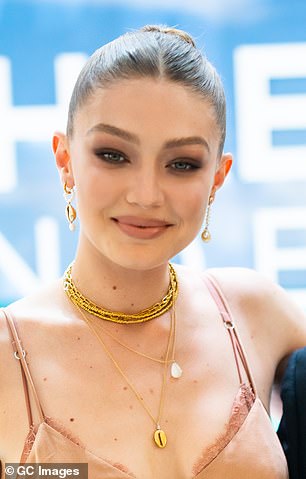 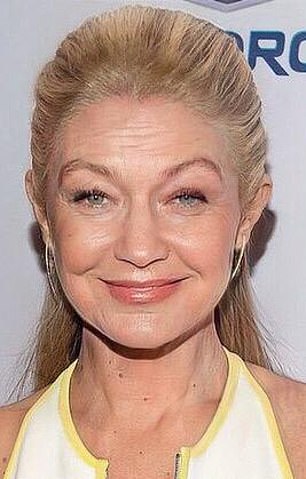 Gigi Hadid’s fast-forward picture is probably an accurate reflection of what her mom Yolanda will look like in a few decades, in addition to her sister Bella

FaceApp is allowed to use your name, username ‘or any likeness provided’ in any media format without compensation and you won’t have any ability to take it down or complain about it, reports claim.

It also will not compensate you for this material and it will retain the image long after you’ve deleted the app.

Twitter users have also pointed to the app’s Russian origins — FaceApp is owned by a company, Wireless Lab, which is based in St. Petersburg.

People raised fears on Twitter and other social media sites that on iPhones, FaceApp would be able to see and upload all your photos.

In a statement cited by media outlets, FaceApp has denied selling or sharing user data with third parties.

‘99% of users don’t log in; therefore, we don’t have access to any data that could identify a person,’ the company said in a statement cited by TechCrunch, adding that most images are deleted from its servers within 48 hours of the upload date.