The recent change in data protection laws has sparked chaos for the Church of England, with vicars fearing they will no longer be able to pray for the sick.

On Friday the General Data Protection Regulation, or GDPR, came into force across the EU in a bid to crackdown on the unethical use of personal data.

But the new regulations have triggered mass confusion, particularly among small businesses, charities and religious organisations who don’t fully understand the rules.

The Church of England expressed concerns they will no longer be able to pray for the sick when they can’t attend church.

Although church leaders have been told they can exercise their own ‘pastoral judgement’, they have been warned against telling their congregations if parishioners are ill without their consent.

This week Marcus Walker, the rector of Great St Bartholomew in central London, tweeted: ‘We’ve been told we can’t pray for anyone who hasn’t given their personal consent, which is just ridiculous.’

There was outrage on social media, with people slamming the new data protection rules as ‘ludicrous’.

But a spokesman for the Diocese of London sought to clarify the situation. 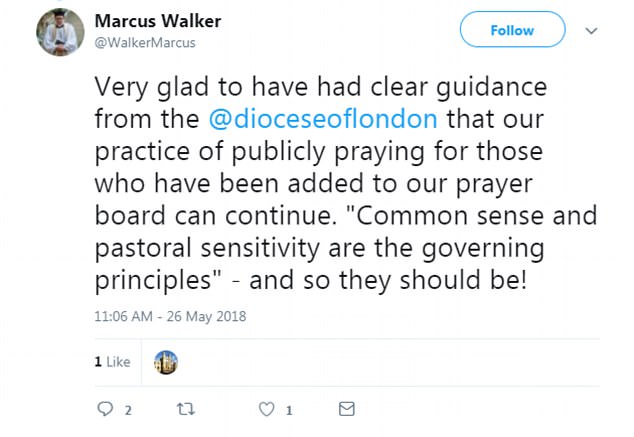 They told The Telegraph: ‘There is no obstacle, under the GDPR, to spoken prayers in church

‘As the national guidelines say, where personal data (such as information about health) is going to be recorded and published, such as on a church website or in a newsletter, it is good practice to ask the person concerned whether they’re happy for that to happen.

‘In sensitive situations in which somebody is highly likely to be unhappy about having their name and/or other information shared, we do warmly advise seeking their agreement, and refraining from sharing their information in print where consent can’t be obtained.’

Marcus Walker, the rector at Great St Bartholomew in London (pictured), slammed the situation as ‘ridiculous’

The spokesman said churches should strive to get consent before publishing the fact a member of the congregation is ill in a community newsletter.

Mr Walker took to Twitter to express his relief, saying: ‘Very glad to have had clear guidance from the @dioceseoflondon that our practice of publicly praying for those who have been added to our prayer board can continue.

‘Common sense and pastoral sensitivity are the governing principles’ – and so they should be!’

The General Data Protection Regulation has been created over the course of four years in order to strengthen data protection in an era in which people are continuously giving social media websites permissions to use their personal information in exchange for ‘free’ services.

GDPR will be replacing the Data Protection Act 1998, which itself was brought into law so that the 1995 EU Data Protection Directive could be implemented and give people more control over how organisations use data.

The regulation also introduced penalties for those who do not comply with the new rules and in turn, suffer from data breaches. It also standardised all data laws across the European Union.

A significant change in the new regulation is that if companies fail to provide adequate security to protect data, they could be fined heavily under GDPR.

When a data breach occurs, the people who are at risk of being affected must be told within 72 hours of the company being aware of it.

Those who do not meet this deadline could face a penalty of two per cent of their annual worldwide revenue, or €10 million (£8.7m), whichever is higher.

Then, the data protection authority should be contacted and in the UK, this means the Information Commissioner’s Office, or the ICO.

The authority should be given information about the nature of data breach, how many people have been affected, what the consequences could be and what measures have been actioned.

If people’s rights are ignored, the fine could reach up to €20 million (£17m) or four per cent of your global annual turnover, whichever is higher. 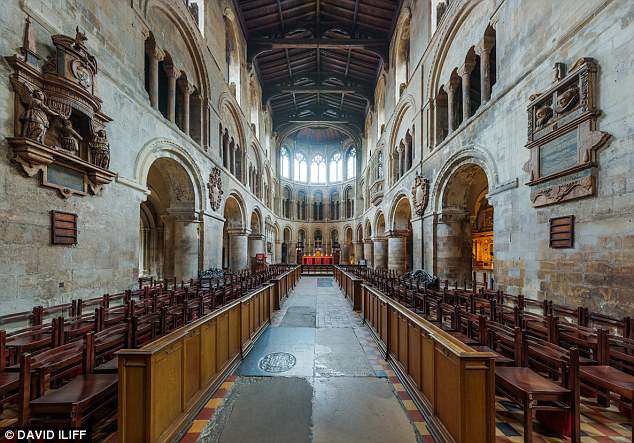 Church leaders have been reassured they can use their own ‘pastoral judgement’ but they should seek consent before saying someone is ill. Pictured: Inside Great St Bartholomew