The Church of England has withdrawn its advice for hosting an Easter meal at home following backlash from priests and Rabbis over claims it ‘appropriated’ Jewish Seder tradition.

The guidance was issued on how to celebrate Maundy Thursday – which marks the beginning of the three-day celebration of Easter – at home amid the coronavirus pandemic.

It called on families to gather at the table with a bowl of warm water, flatbread, honey and a sprig of rosemary before encouraging them to state: ‘This is the night when God delivered his people Israel from bondage and oppression in Egypt.’

But the guide, which also included a recipe for flatbread, has been criticised for ‘appropriating liturgy’ from Judaism over its similarities with Seder – a meal shared by Jewish people at Passover that includes the preparation of unleavened bread, bitter herbs and salt water.

The Church of England has since withdrawn the advice and issued an apology ‘for any offence caused’.

In a document entitled Prayer At Home, published by the Church of England, it said: ‘This short form of prayer is intended to be used at home by those who at this time of the pandemic are unable to gather with others to celebrate the Holy Communion on the evening of Maundy Thursday.

‘While the prayers and actions echo motifs from the Jewish Seder, this is not such a meal.

‘Jewish people will understand the resonance of the symbols and practices in very different ways from Christians.’

The Church also promoted a Facebook event on Wednesday alongside a screenshot from a video, which was never published, that appeared to show a family taking part in a Christian-style Seder.

But members of the clergy have claimed the guidance was inappropriate. 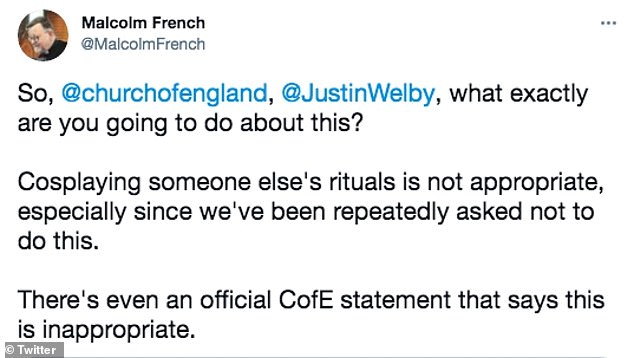 Father Nick Nawrockyi, dean of Grimsby and Cleethorpes, shared a screenshot of the event alongside a caption that read: ‘Eek! The @churchofengland offering for Maundy Thursday online looks worryingly like a “Christian Seder”.’

Dr Jo Kershaw, parish priest of St Anne’s Wrenthorpe in Wakefield, retweeted it and added: ‘A) it is wrong (and harmful) to steal Jewish ritual. We have our own.

‘B) they may say this isn’t a Christian Seder, but the duck test (if it walks and quacks like a duck….) applies, and that sure as heck isn’t what a normal Anglican Eucharist looks like.’

Priest Malcolm French added: ‘So, @churchofengland, @JustinWelby, what exactly are you going to do about this?

‘Cosplaying someone else’s rituals is not appropriate, especially since we’ve been repeatedly asked not to do this.’

And Rabbi Debbie Young-Somers, from London, wrote: ‘I am very heartened by the many Christians on my time line asking people not to appropriate #passover #seder for Easter. Thank you…’ 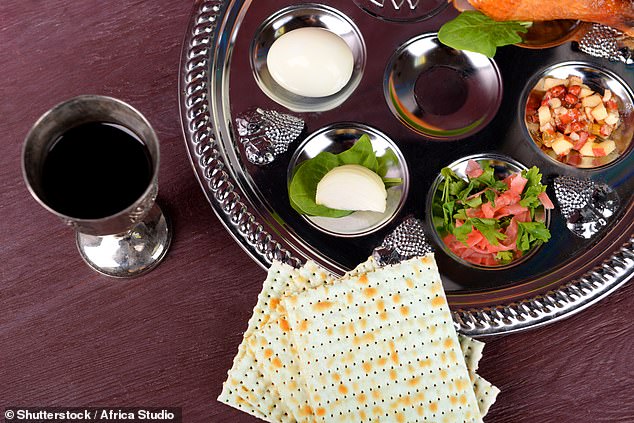 The guide was criticised for ‘appropriating liturgy’ from Judaism over its similarities with Seder – a meal shared by Jewish people at Passover that includes the preparation of unleavened bread, bitter herbs and salt water (pictured)

The Church of England has since withdrawn the guidance and ‘apologised for any offence caused’.

The Revd Dr Richard Sudworth, the Church of England’s National Inter-Religious Affairs Adviser, said: ‘The brief prayers and actions are not, and were not intended to be a Christianised seder, as the text pointed out.

‘Nor was this intended to replace the celebration of face-to-face Eucharist, that we long for so much. Rather, this was an offering to families to be able to pray and interact, across the generations.

‘The prayers and readings were offered to help families be mindful of the events of the original Last Supper, and the framing context of the feast of the Passover to Jesus and the disciples, connecting with our Christian Bible texts for this day.

‘However, we do not wish to encourage an impression that was not intended by the resource and apologise for any offence caused.

‘As we prepare for Easter, we would like to offer our greetings to everyone in the Jewish community as they celebrate Passover.’

MailOnline has contacted the Church Of England for further comment.