A black woman who sat on the lawn of a church in North Hollywood shared the shocking moment officials hung ‘no trespassing’ signs in front of her and accused her of posing a threat to children.

Alex Marshall-Brown, a Los Angeles-based stuntwoman and Disneyland Star Wars actress, posted the video on Facebook Tuesday showing an altercation between her and three members of the St. Paul’s First Lutheran Church.

One of the members told her ‘All Lives Matter’ and another accused her of having ‘an agenda’ as they revealed they had already called the cops in an attempt to have her moved.

The church and its nearby school has since apologized for its members’ actions and said they did not act in a way representative of them. 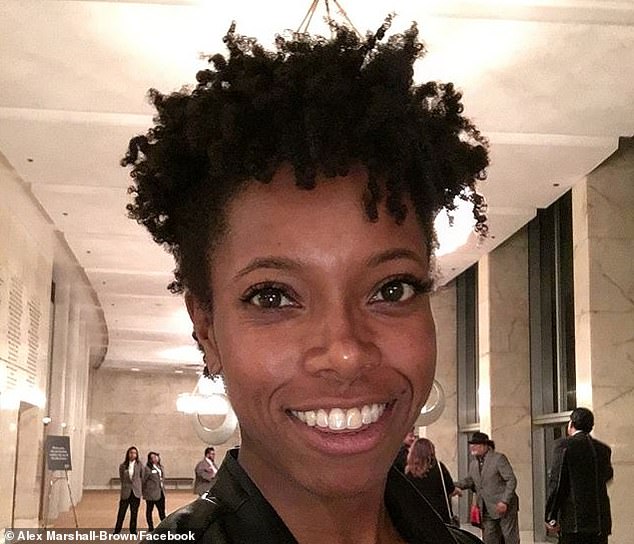 Marshall-Brown said in a Facebook post with the video that she had been sitting working on the lawn when cops on bikes approached her and said they had received a call asking for her to be removed from the property.

There was no sign saying she was trespassing and she claims she was just eight feet from the sidewalk so she told them she was remaining where she was.

Two men later emerged from the church with a drill and ‘no trespassing’ signs and began to hang them from the tree in front of Marshall-Brown as she filmed them.

‘This church is not welcoming me?’ she asked the men.

‘No, it’s not, we have a lot of problems with people here from the park vandalizing and we don’t want anyone on the private property,’ one of the men replies.

‘You want to stay on the sidewalk, that’s ok, the Mayor says you can have all the sidewalk you want but you can’t be on the grass that’s our private property.’

Marshall Brown asks the man if she has vandalized anything or if she poses a threat to them but he initially stays quiet and continues hanging the sign.

‘You gave people a bad time so I’m going to take care of it,’ he continues again.

‘You know we used to be real nice about it,’ he adds when asked why they were not welcoming her onto church property.

‘Not anymore. When people are not nice, we’re not nice.’

Marshall-Brown then asks how she has been unkind to them, to which he responds:  ‘We have to treat everyone the same, all lives matter. 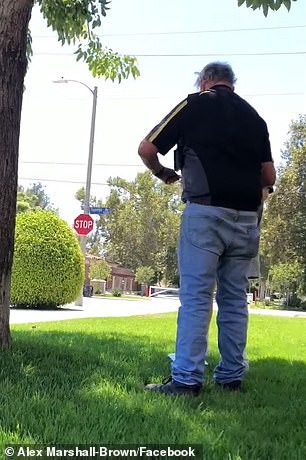 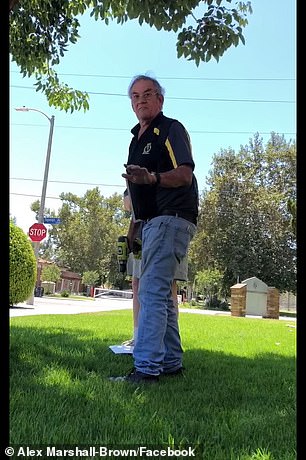 Two men first appeared to drill the ‘no trespassing’ signs to the tree after cops told them they could not remove Marshall-Brown from the lawn unless there were signs up. She only spoke to one of the men, pictured above, who told her ‘All Lives Matter’ and that she had to move 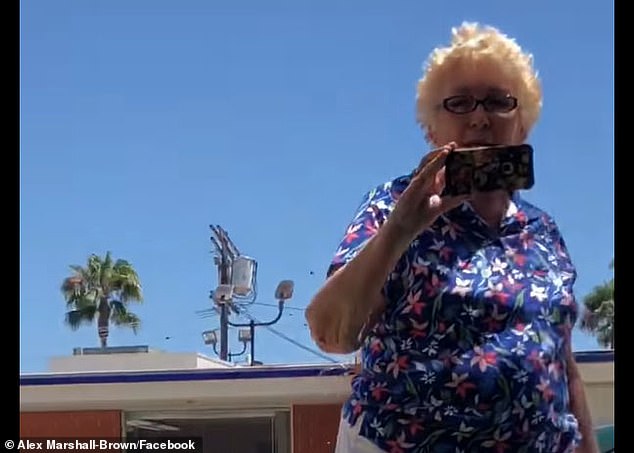 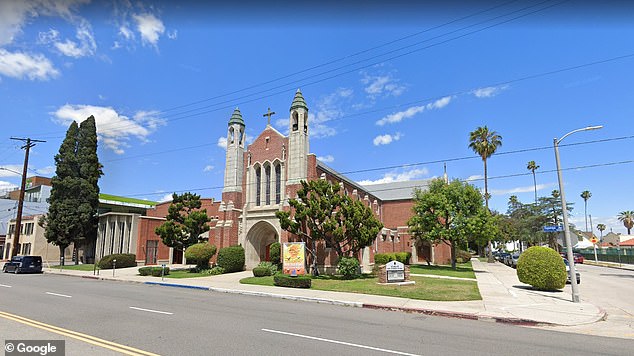 St. Paul’s First Lutheran Church, pictured, said the members did not represent them

‘I’m sorry but I’m telling you, we have to protect ourselves.

‘If you want to be here, there’s a whole park, there’s 87 acres over there, you can go and be in the shade and you don’t want to be over there.’

Marshall-Brown then asks again if she is threatening them by working on the grass.

‘So you’re willing to call the cops for somebody sitting on a piece of grass when there are clear crimes they should be taking care of?’ she asks him.

At this point, a woman appears along the sidewalk filming Marshall-Brown and she begins to address her.

The woman tells her that lives are being threatened at the church and at the school. 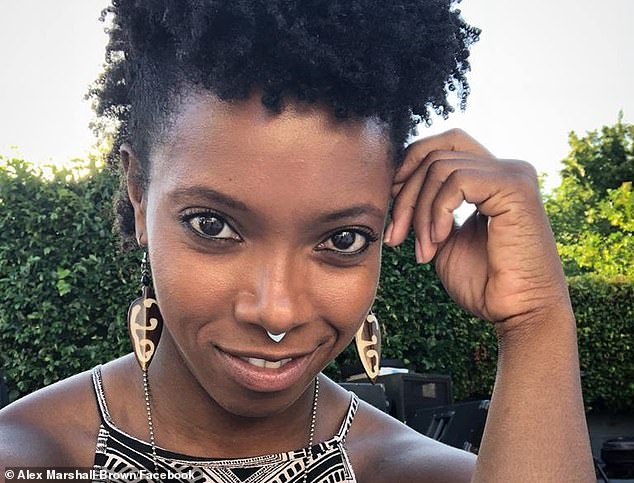 Alex Marshall-Brown is a Los Angeles-based stuntwoman and an actress with Disneyland’s Star Wars: Galaxy’s Edge. She said she was working on her laptop on the church’s lawn Tuesday 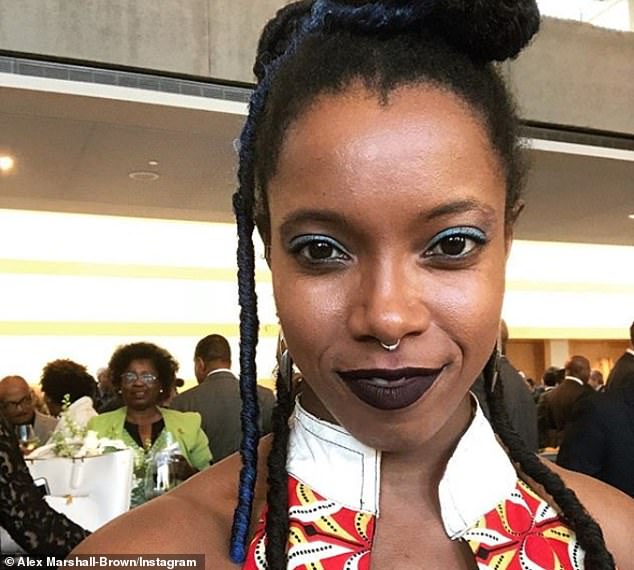 Marshall-Brown, pictured, had shared a post about being approached by the cops before the three church members emerged. She said that there were no trespassing signs before this

‘You see I am clearing not bothering anyone. I’m clearly sitting here doing work so this is in excess. You could have come to me yourself instead of calling other people to try and usher me off the property,’ Marshall-Brown answers. ‘How am I threatening your life?’

‘We can’t have you sitting around, we have to protect,’ the woman answers, again telling her that people sitting around would threaten the children and claiming that the actress has ‘an agenda’. She also claims that secretaries at the church have been assaulted.

‘I don’t have an agenda, I’m clearly here just getting work done,’ Marshall-Brown hits back.

‘You want to see? I’m looking up camping grounds and looking how to explore and see my family.’

The three church members then leave and she shows the new ‘no trespassing’ sign on the tree.

Marshall-Brown added in her Facebook post that friends had seen her video and came to meet her as she left.

St. Paul’s First Lutheran Church said Wednesday that the volunteers involved in the incident have voluntarily offered to step down from their positions at the church. 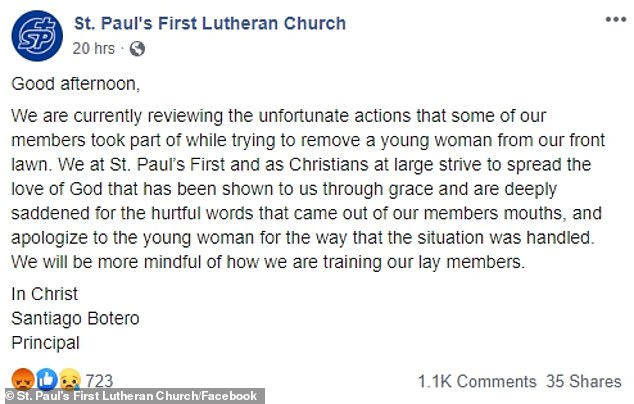 St. Paul’s First Lutheran Church said they were ‘saddened’ by their members’ actions 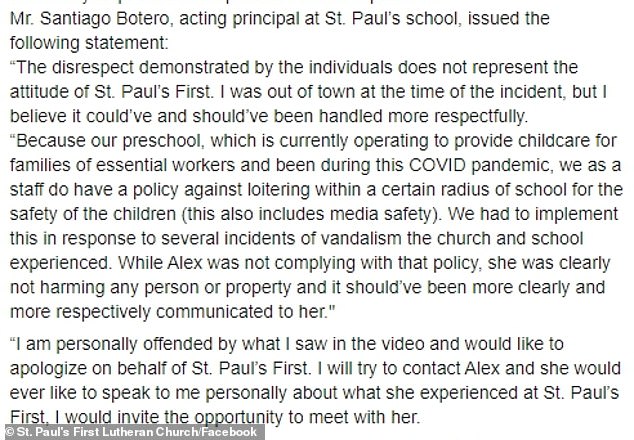 ‘It is the position of St. Paul’s First Lutheran Church and School that Marshall-Brown posed no risk or threat to the property and that this incident was not handled in a way representative of the church or the school,’ the church said in a Facebook post.

Santiago Botero, acting principal at St. Paul’s school, added that he is ‘personally offended by what I saw in the video and would like to apologize on behalf of St. Paul’s First’.

‘As Christians, it is our duty to demonstrate to others the love and mercy that Christ shows to us,’ he added.

‘Unfortunately, this did not happen yesterday. I immigrated to the United States and have experienced both love from people as well as racist assumptions about me as a Latino man, and even though I can’t put myself in the shoes of the black community, this is why I want to represent St. Paul’s First as a loving church.’

The church said that it would be ‘more mindful of how we are training our lay members’.

According to her website, Marshall-Brown premiered the role of Vi Moradi at the dedication ceremony of Star Wars Galaxy’s Edge in Disneyland.

She also works as a stunt woman and a voice actress.