The Church of England is to give more support to tackling racism and discrimination directed towards the travelling community, with a bishop declaring it is ‘still tolerated’.

The church’s governing body, the General Synod, voted in favour of a motion on Saturday to speak out publicly against racism and hate crimes directed against Gypsies, Irish Travellers and Roma.

The Synod voted overwhelmingly in favour of the motion, with 265 supporting it and one voting against.

The Synod, the church’s governing body, discussed instigating a commission on sites for Gypsies and Travellers to encourage the local and national church to make land available for new sites managed by Housing Associations [File photo]

But Mary Durlacher, a parishioner in the north of Chelmsford diocese, was one of those who spoke out in opposition to the plans.

She said: ‘Being near to the A12, we found one day, that one of our two churches had a car park completely full of Travellers.

‘Police advice was, don’t go there, let us deal with it, in the meantime it meant no services, and on a Friday of a bank holiday, the church was inaccessible.

‘People wanting to visit their relatives or their families buried in the churchyard couldn’t, there was a lot of upset and there was fear because there is a link with a rise in petty crime – I don’t know the exact figures, but there is a correlation. 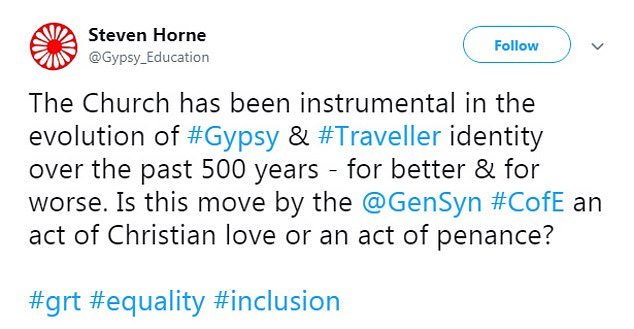 Replying to Mr Horne’s post, Twitter user Pete Joyce, who is researching the 18th Century parishes of Shorne and Cuxton, said until the Church of England ‘is truly penitent of many sins’, it ‘will not be able to truly love its neighbour’ 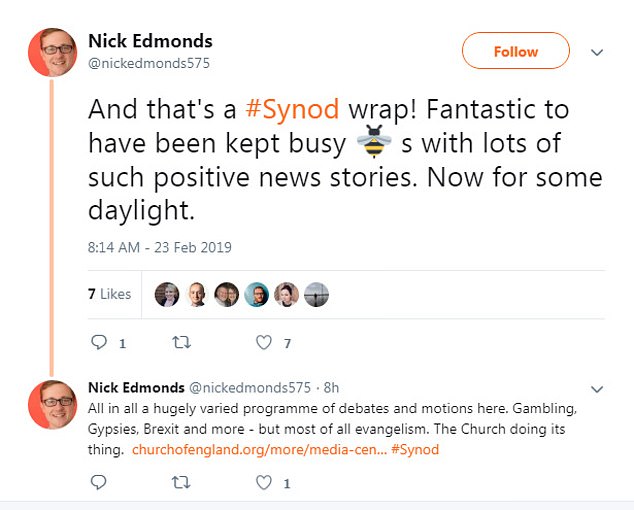 Nick Edmonds, Head of Media for the Church of England, said the ‘hugely varied programme of debates and motions’ at the General Synod covered gypsies, Brexit, gambling and more

‘They did leave, but they left on the Saturday, about three o’clock and we had quite a job.

‘There was the issue of excrement and my husband and I got on our gloves because the smell was quite interesting. They hadn’t done too much damage but they might be back said the police’.

The Bishop of Chelmsford, Stephen Cottrell – who put forward the motion, told the synod: ‘If one of us in any situation was to use racist language about some other person or group, it is very likely in today’s society that we would, and rightly so, be immediately called out.

‘Racism against Travellers and Roma and Gypsies is still tolerated.

‘The Equality and Human Rights Commission have found that discrimination and racism towards Gypsies and Travellers is common, frequently overt and seen as justified.

‘The police have said that a prejudice against Gypsies and Travellers in endemic in our society, and often fuelled by stereotypes in the media.’

A report by Anglia Ruskin University was cited, which found that nine out of every 10 Traveller children had experienced racist abuse.

He then added: ‘Sorrowfully, we, the church of God are no exception, there are examples of the racist hostility and exclusion meted out by the church. 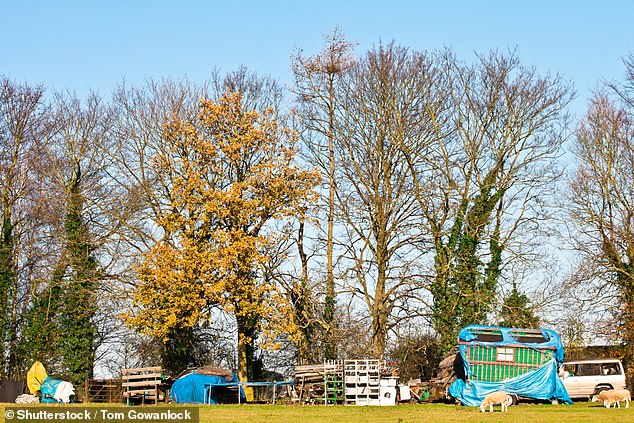 The church’s governing body, the General Synod, voted in favour of a motion on Saturday to speak out publicly against racism and hate crimes directed against Gypsies, Irish Travellers and Roma [File photo]

‘Gypsy, Traveller and Roma people deserve particular support, hence the motions call to the leadership of the church to speak on these issues for every diocese to think about appointing a chaplain.’

The Synod then discussed instigating a commission on sites for Gypsies and Travellers to encourage the local and national church to make land available for new sites managed by Housing Associations.

The motion would call for each diocese to be encouraged to appoint a chaplain to Travellers, to help the potential for church growth, and work to combat racism in the church and wider community.