A church warden was stabbed to death in a Co-op yesterday as his dementia-suffering wife waited in the car, it has been revealed.

Church warden John Rees, 88, left his wife Eunice, 87, in their Honda car while he queued up at a convenience store in Pen-y-Graig, south Wales on Tuesday for their weekly shop.

But he died after a woman ‘went mad’ and stabbed him in the throat – also injuring three others during her rampage.

A friend said: ‘It is so tragic. John was so dedicated to Eunice and they were always together.

‘She has no idea what has happened. Eunice has dementia and she can’t take it in. She keeps on saying: “Where’s John?”

Police officers today outside the Co-op in the village of Pen-y-Graig in Rhondda, South Wales

Father-of-two John – described as a pillar of the community – took his wife to the Co-op store in Pen-y-Graig, Rhondda, from their home a mile away in Tonypandy.

But he never returned. Police found her 15 minutes later still in the car waiting for her husband.

The family friend said: ‘He was known to everyone around here as Uncle John – he was that sort of man. He was very smart and always wore a shirt even though he was long retired.

‘He was a church warden and never had a bad word to say about anyone. He was the perfect gentleman.’

The couple had an actress daughter who died about two years ago and a son living in London. They have two grandchildren.

John retired decades ago from his senior job with the South Wales Electricity Board.

The couple were enjoying retirement even though Eunice was severely affected by dementia.

The friend said: ‘Eunice can’t look after herself and she will have to go into a home. She doesn’t really understand. People are talking to her and she is nodding but then she says: “Where’s John?”

‘Maybe it is better that she doesn’t know at this stage of her life.’

Passers-by at the scene described Eunice as ‘upset’ and ‘looking for her husband’ after the stabbing before she was escorted away by police.

Another man Andrew Price, 58, is recovering in hospital after he was stabbed in the horrific attack.

Mr Price had queued up to go inside the Co-op star when he stabbed in the horrific attack in a quiet village after queuing up outside to go in.

Andrew, of Penygraid, Rhondda, is in a stable condition but another victim, an elderly man, tragically died from his injuries.

Andrew’s niece Katie Evans said ‘My uncle was sadly one of the victims that got stabbed in Penygraig earlier. This world has gone crazy.

‘Hope you make a speedy recovery Andrew Price. Our thoughts are also with the others.’ 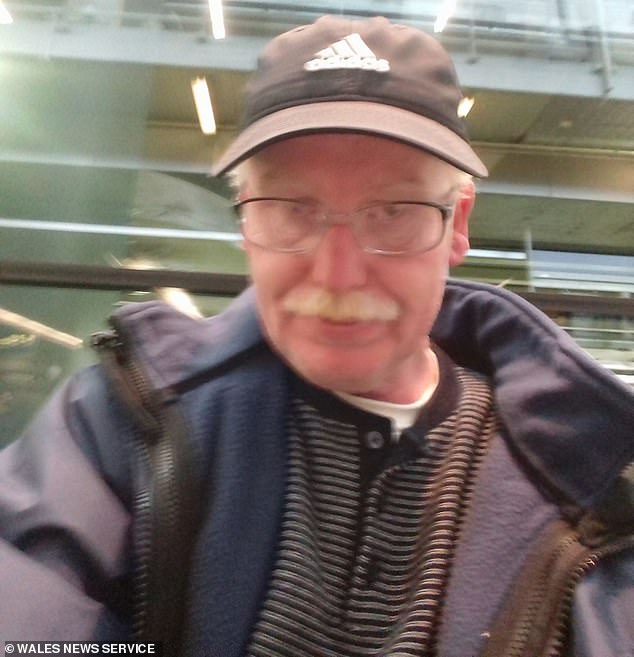 Friends took to social media to send their best wishes to Andrew who remains in hospital.

An off duty NHS nurse and another shopper were both stabbed but escaped with non-life threatening injuries.

One of the victims was slashed in the face and ran to a nearby shop pleading with the owner to put the security shutters down.

Police surrounded the small Co-op supermarket in the village of Penygraig, near Tonypandy, South Wales, at lunchtime today after 999 calls saying a woman was in the shop stabbing people with a knife.

The woman was arrested in connection with the incident which was being treated as murder. 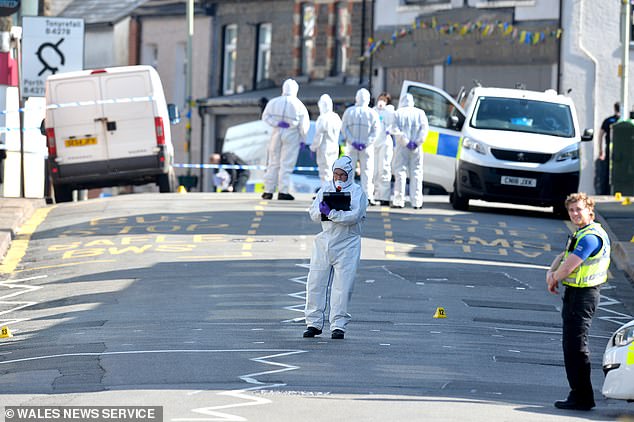 A South Wales Police spokesman said: ‘Shortly after 1.45pm today police officers were call to a serious incident at a convenience store on Tylacelyn Road in Penygraig in the Rhondda.

‘An elderly man has died, another man is in a stable condition at the University Hospital of Wales and two other people have suffered non life-threatening injuries.

‘A 29-year-old woman from Porth has been arrested on suspicion of murder and taken to Merthyr Tydfil police station.’

Detective Chief Inspector Mark O’Shea of South Wales Police’s Major Crime Investigations Team said: ‘This is a very tragic incident and one man has died and his family is being supported by specially trained police officers.

‘Our thoughts and condolences remain with the victim’s family at this very sad time.

‘This incident will have understandably caused a lot of shock in the local community and I want to reassure residents that a full investigation has been launched. However, we are not looking for anyone else in connection with this incident.’

The South Wales force had also referred itself to the Independent Office for Police Conduct, but did not say why.

Locals said the arrested was from the village but now lives with her mother and young son in the nearby town of Porth, Rhondda.

A relative said she had mental health issues and had come out of a psychiatric hospital six weeks ago.

The main street through Penygraig was cordoned off while forensic officers examined the scene.

Eye-witnesses said the supermarket floor was covered in blood and a knife had been removed by police.

Locals believe the alleged knifeman took the weapon into the shop because it doesn’t sell knives.

Chris Bryant, Labour MP for the Rhondda, said: ‘I’ve been informed of the horrific events in Penygraig and will keep people updated as soon as I have further news.’

South Wales Police said a woman was arrested at the scene. The force helicopter landed at a nearby rugby field and the public were warned to stay away.

Raj Ravi, 35, manager of the local Post Office, said: ‘It was horrific, there was blood all over the shop floor. She must have gone in there and just gone mad with a knife.

‘I saw two people being taken out of the Co-op, both had neck wounds. I was told one is dead and the other is critical. Two more people were also injured.’ 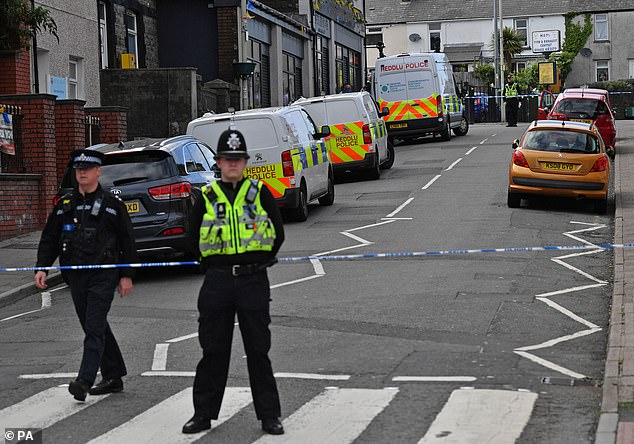 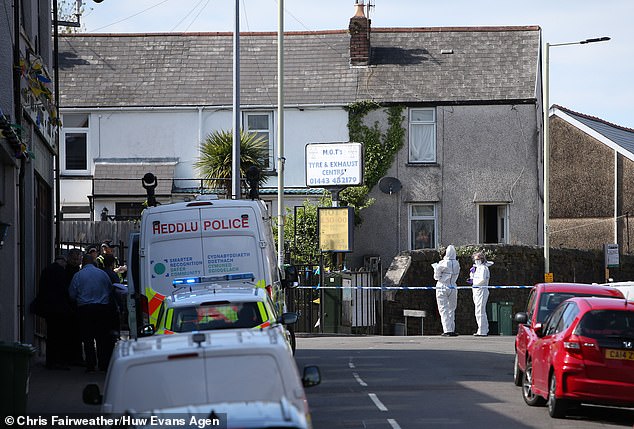 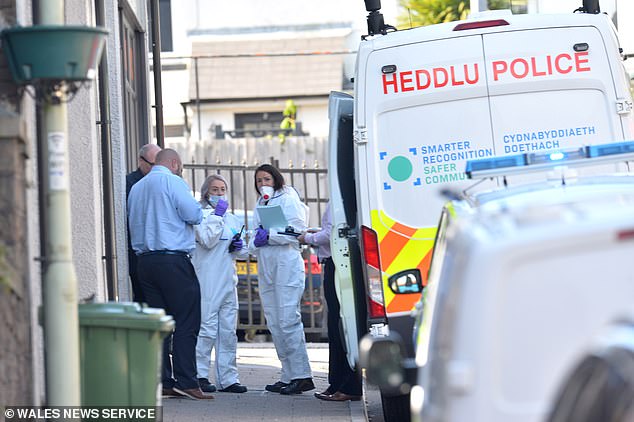 Mr Ravi added that he hopes those injured will be OK, and said he believed the woman went into the shop at about 1.30pm armed with a knife.

He said: ‘They don’t sell knives in the Co-op, she must have taken it in with her. It is a terrible thing to happen, this is a busy little street but it’s quiet and we don’t get trouble.’

It is understood the man who died was in the shop while his elderly wife was waiting in their car outside because of coronavirus restrictions.

Locals in the former mining village told how one bearded man was stabbed in the neck in the street after the armed woman ‘went berserk’ in the shop. 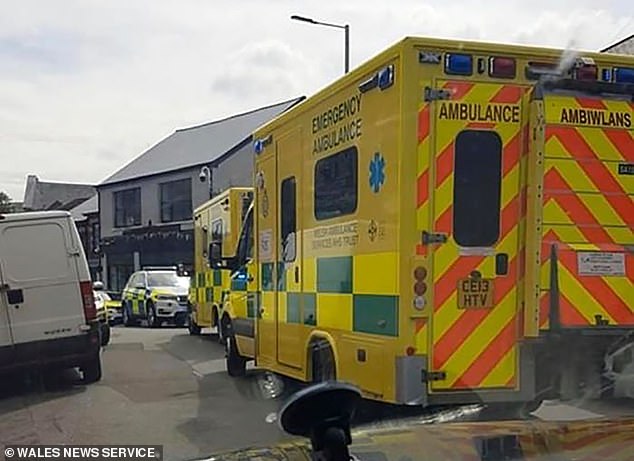 A neighbouring shopkeeper said: ‘I saw a man with blood dripping down the back of his head and a woman with a cut on her neck.

‘It was crazy – we think it was just a random attack. But everyone is feeling very uptight.’

Another shopkeeper said: ‘The man was just sat there in his van when he was stabbed in the neck. He was left slumped over the wheel covered in blood.

‘She then went on and stabbed two women in the Co-op. One of the women who was stabbed was just going about her daily shop when she was attacked. 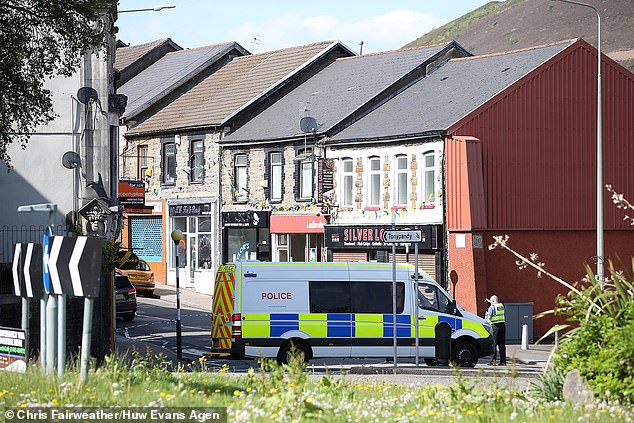 ‘I saw her mother outside the Co-op after and she was in bits. The police came round afterwards and told us we had to close and go home. It’s so scary.’

Grandmother Sheila Reynolds, 68, who lives nearby said: ‘I had been to the ironmongers next door to the Co-op just moments before.

‘The next thing the street was full of police and ambulances.

‘It is dreadful for the families of those involved, espeially at this time.

‘This is usually a very quiet village- everyone is really shocked.’

Police are treating it as a random attack and say they are not looking for anyone else in connection with the stabbing incident.

Several ambulances, police cars and an air ambulance were called to the scene. The shopping street was closed off while police forensic teams carried out their work.

Another witness said: ‘I just saw a hat and cans on the floor outside the Co-op as I was pulling up and thought ‘that’s strange’, then paramedics arrived.

‘My husband went to go into the Co-op but got stopped by people who told him that there was a woman inside with a knife who was stabbing people.

‘I stayed in the Jeep and more police and paramedics arrived and they went to a man who was in the van parked in front of my Jeep. 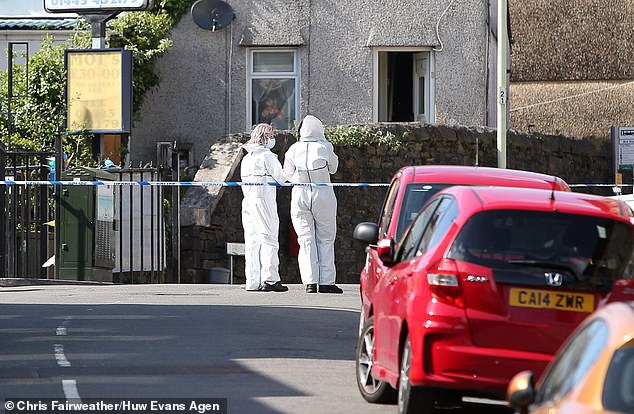 ‘This was the man who had been stabbed repeatedly, they took him out of the van and placed him into the ambulance.’

Councillor Andrew Morgan, leader of Rhondda Cynon Taf County Borough Council, said: ‘I have this afternoon been made aware by the police of the serious incident which has occurred in Pen Y Graig today.

‘My thoughts are with the families and friends of those involved in this awful incident. 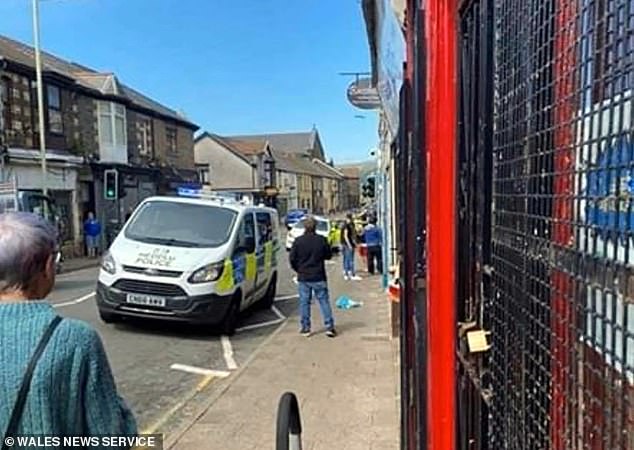 ‘More details will be issued by the police in due course, but council services stand ready, working alongside South Wales Police, to provide reassurance and support to the community at this very difficult time.’

Leanne Wood, Plaid Cymru Assembly Member for Rhondda, said: ‘I have heard a terrible incident has happened in Pen Y Graig and someone has been arrested.

‘I very much hope everyone involved is OK. Please get in touch if there is anything I can help with.’

Alex Davies-Jones, Labour MP for Pontypridd, said: ‘Really concerned by the news coming out of Pen Y Graig this afternoon.

‘Thank you to all our emergency services for responding so quickly. Thoughts are with all those involved.’