Churches across England have thrown open their creaking doors for the first time in 104 days as they welcome the public back for Sunday services.

Westminster Abbey, York Minster and Canterbury Cathedral were all lit up as congregations arrived this morning, alongside cathedrals and churches across a patchwork of parishes.

Changes to Holy Communion meant pre-divided bread and wine could not be spoken over or shared out, due to the risk of infection, and that vicars should drink all the wine that has been consecrated.

Singing, a touching part of every church service, was also banned in line with government guidelines.

It comes after hundreds of couples forced to push back their weddings due to the coronavirus crisis finally managed to tie the knot in cut-down celebrations of up to 30 people yesterday.

WESTMINSTER ABBEY: Worshippers were welcomed back for Sunday service today for the first time in 104 days 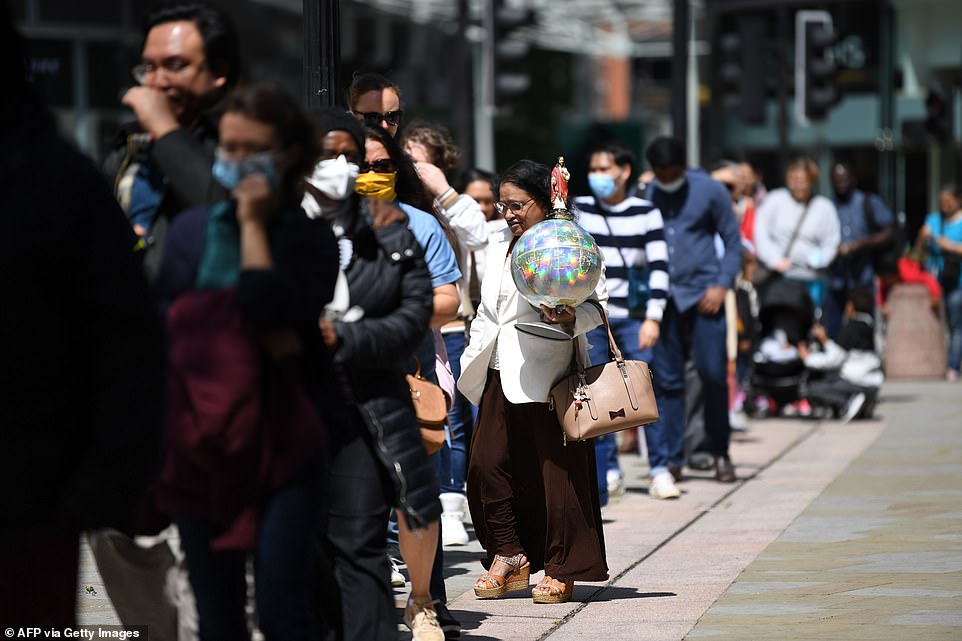 WESTMINSTER: Queues were seen forming outside. They included one worshipper that brought Jesus mounted on a globe 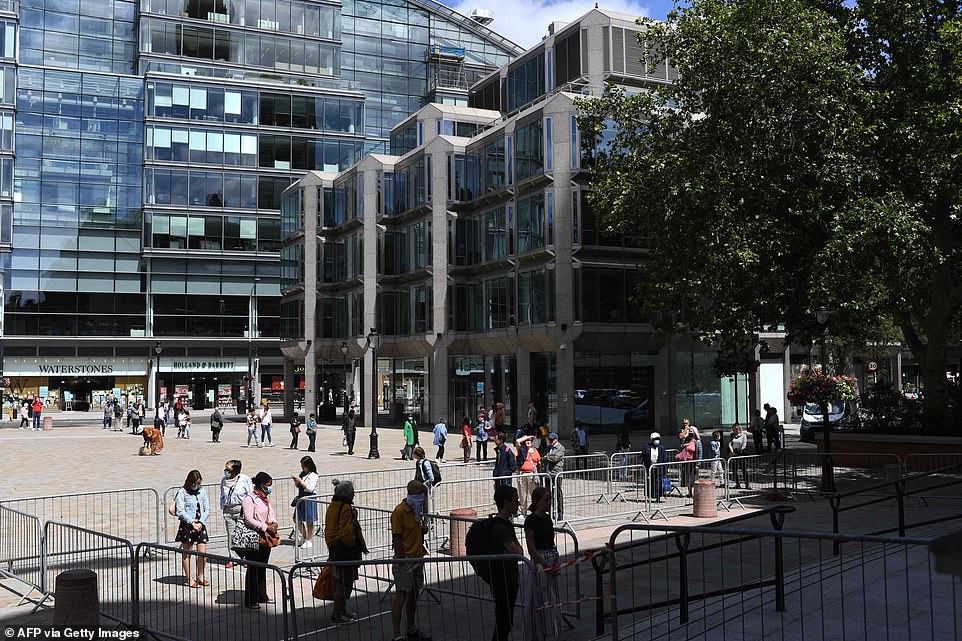 WESTMINSTER: Attendees were required to keep two metres between each other as they arrived for the service 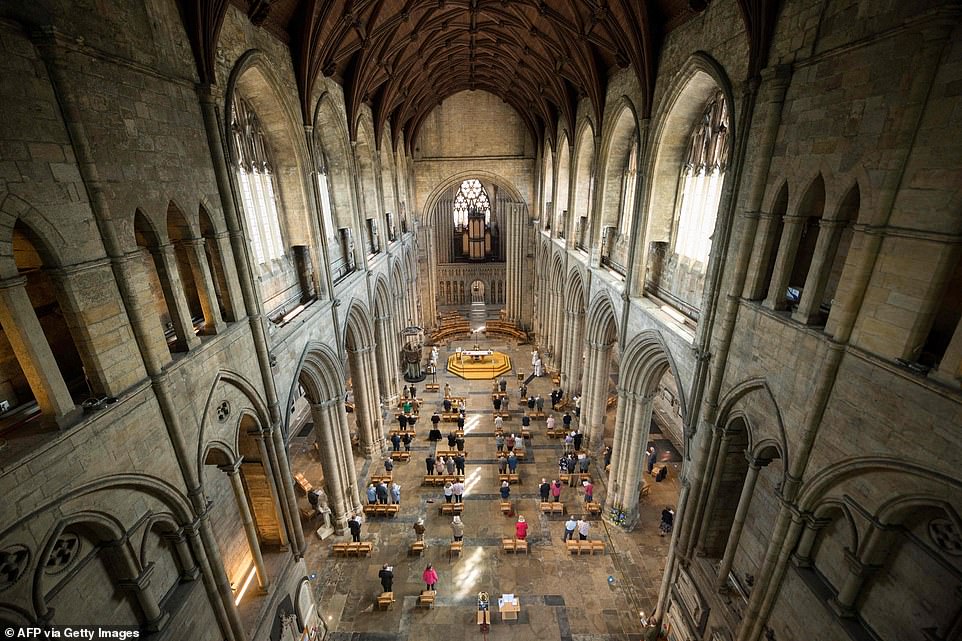 RIPON CATHEDRAL: This holy centre was also opened to worshippers today as lockdown restrictions were relaxed 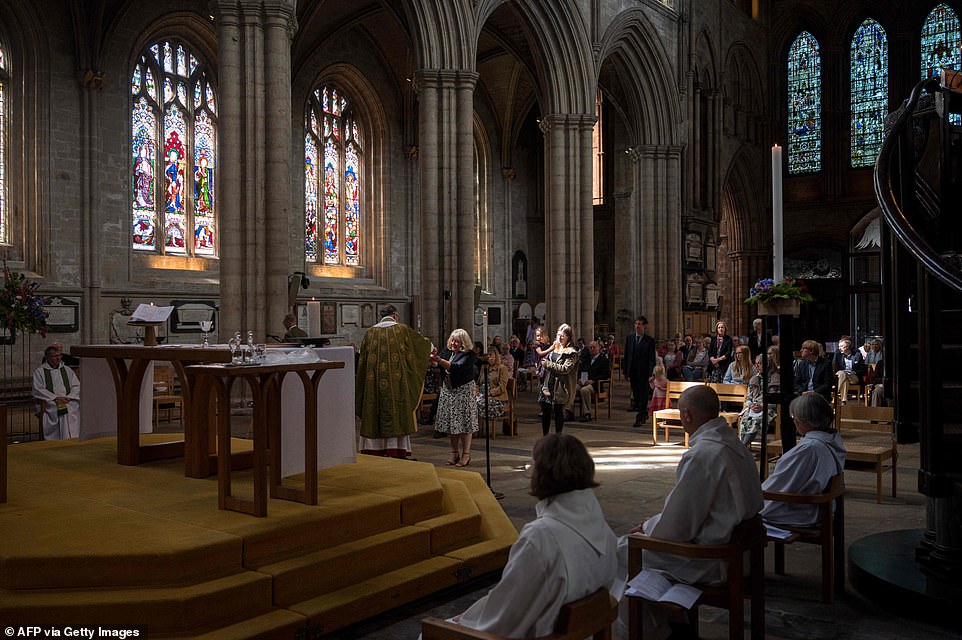 RIPON CATHEDRAL: The Dean of Ripon, John Dobson, performs Holy Communion today during the service of the Eucharist 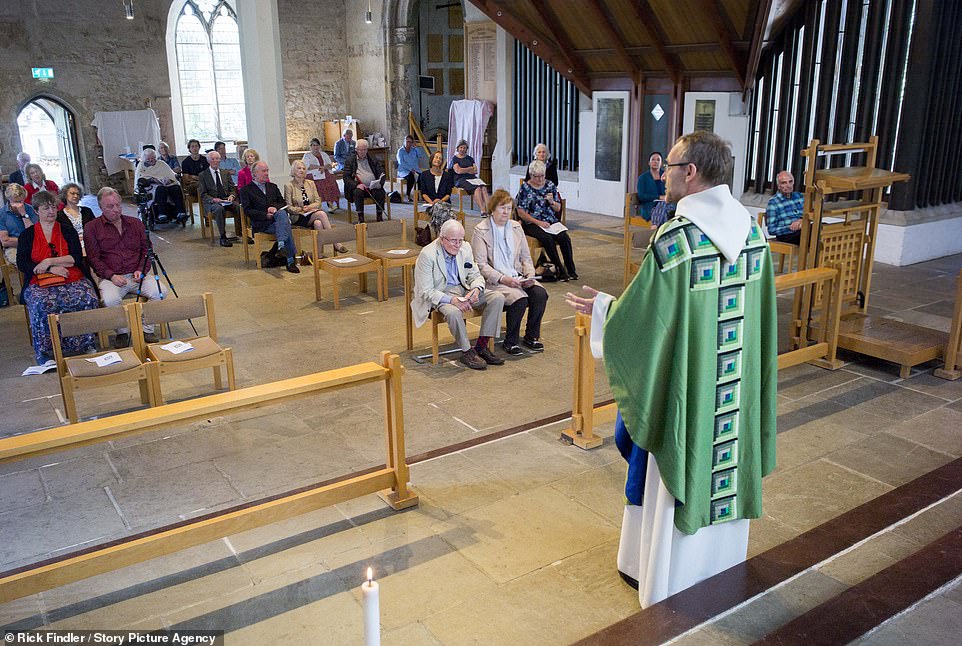 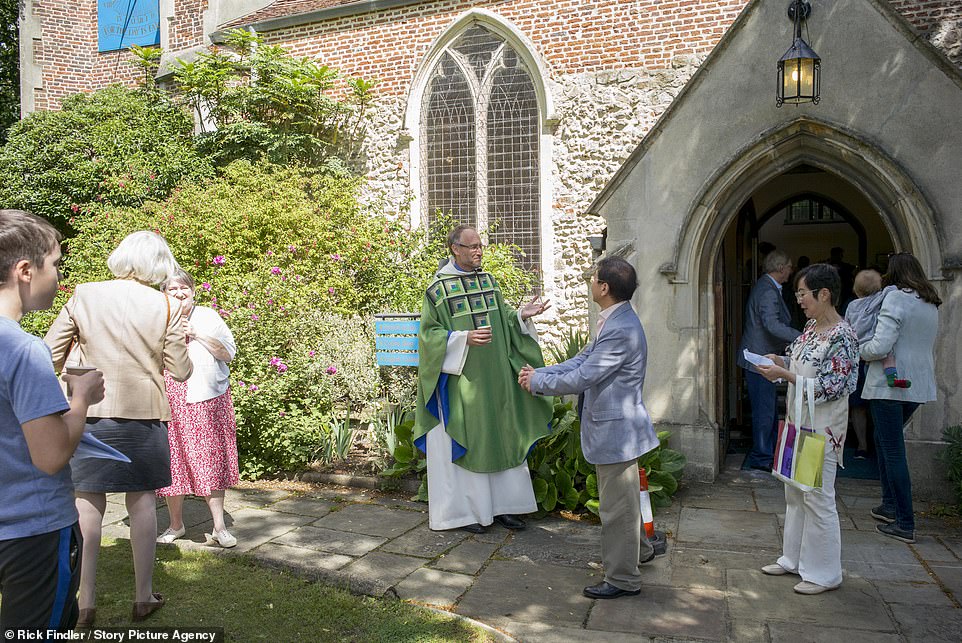 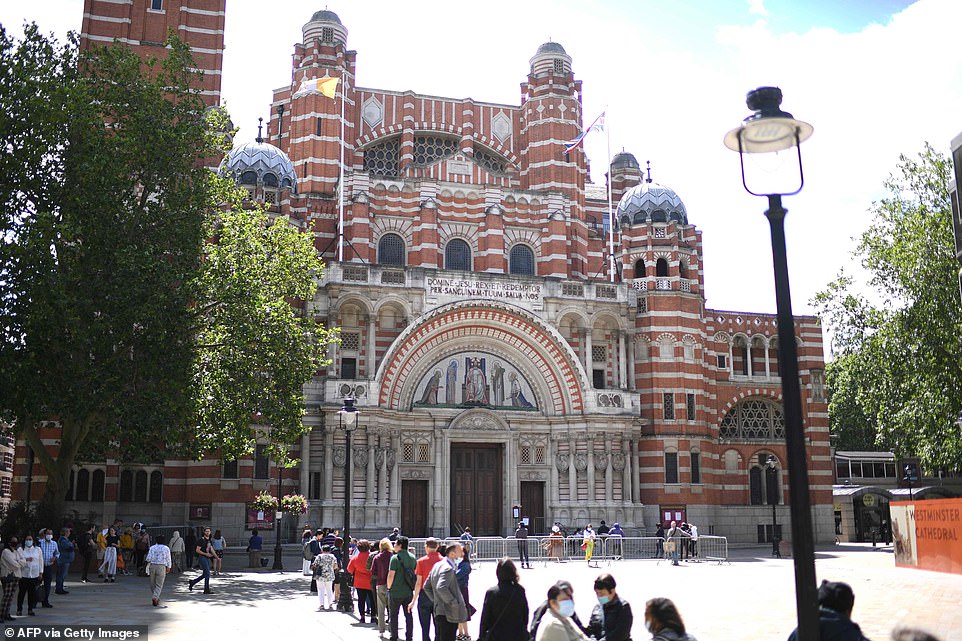 WESTMINSTER CATHEDRAL: A long line of worshippers was also photographed outside the capital’s cathedral

Queues of worshippers, including one carrying a statue of Jesus on top of the world, stood in the sunshine outside Westminster Abbey this morning as they waited to be welcomed into their first Sunday service since March.

The 930-year-old church welcomed worshippers from 9am with Morning Prayers and Holy Communion, before the Eucharist took place with an organ accompaniment at 11.15am.

They sat on chairs laid out two metres away from each other, in line with social distancing. The Abbey said on Twitter: ‘It was wonderful to welcome back worshippers as services resumed in the Abbey today.’

York Minster, which has been closed since March 16, confirmed today that its services will re-start but will be shorter and have a limited number of congregants who will need to leave their name and contact details.

The cathedral reopened for individual prayer on June 16, and will start welcoming visitors again from July 11.

The Dean of York, the Right Rev Dr Jonathan Frost, said: ‘We are delighted to open our doors again to welcome people for public worship and to explore this magnificent sacred space.

‘Over the last few weeks we have welcomed many for individual prayer, but to gather again for worship – with relevant physical distancing measures in place – will be a huge encouragement for many.’ 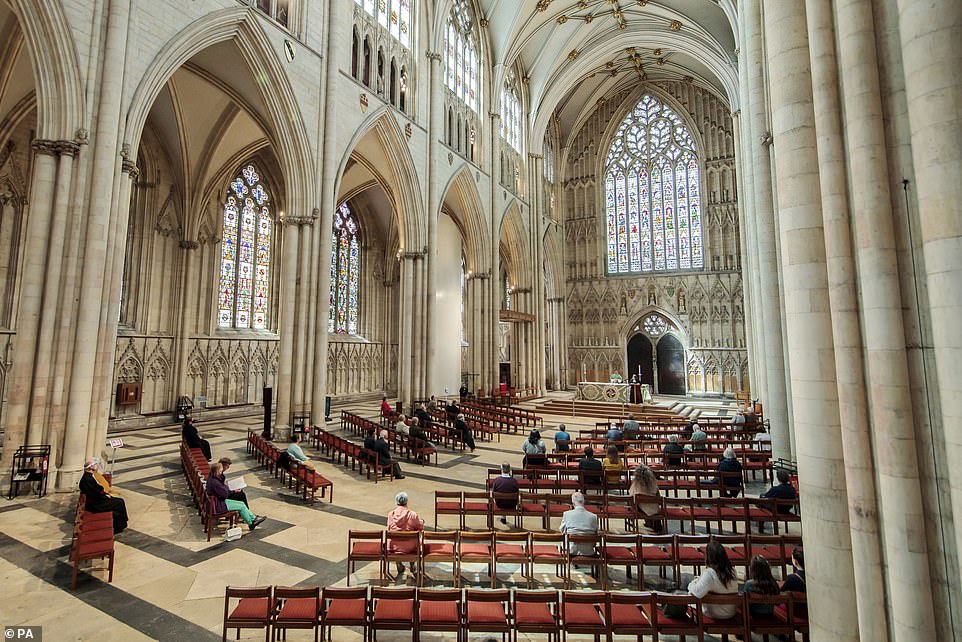 YORK MINSTER: Dean of York, Rev Dr Jonathan Frost, said he was ‘delighted’ to welcome back the public for morning worship 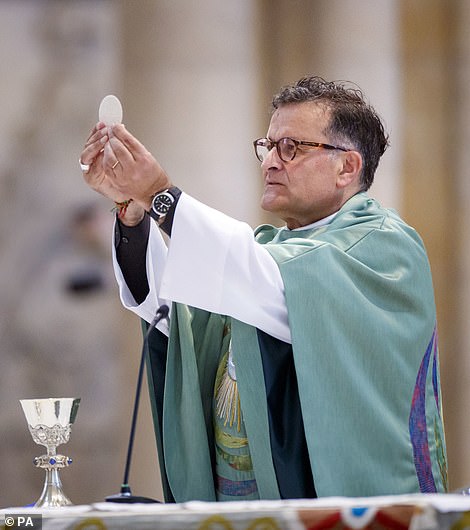 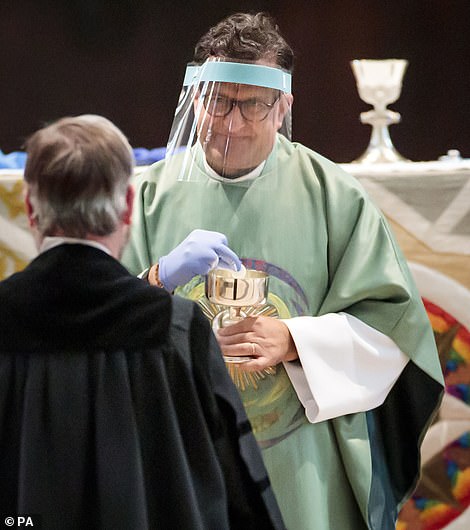 YORK MINSTER: Changes also had to be made to Holy Communion. Guidelines recommend that the divided bread and wine is not talked over, and that the vicar drinks all wine that has been consecrated 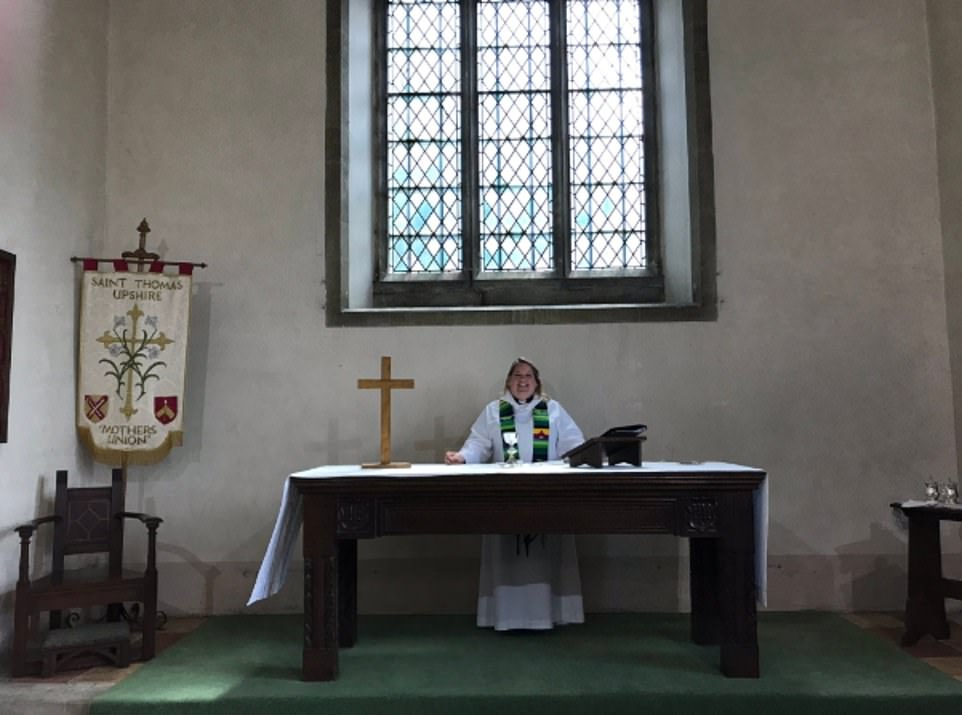 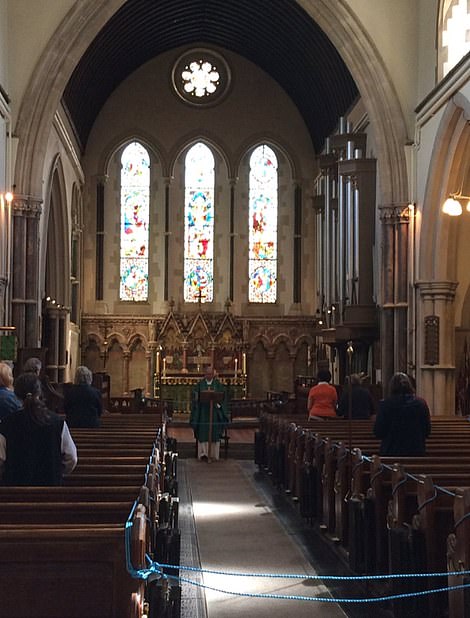 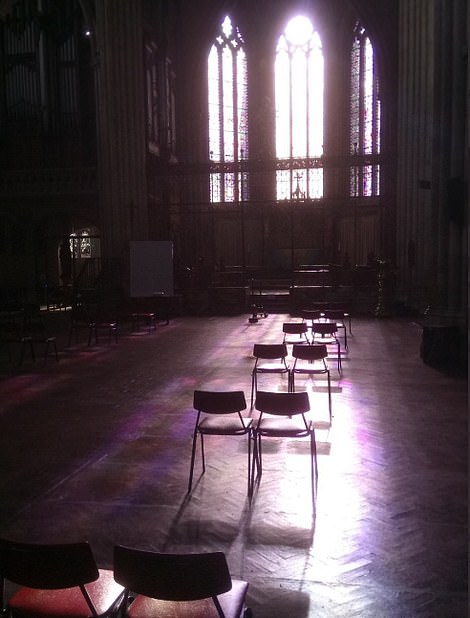 SOUTHGATE IN LONDON (LEFT) AND LEAMINGTON SPA: Both churches were set up following social distancing

A different type of car service! Churches hold services in car parks so worshippers can sing

Churches today held their first ever drive-in services as they resumed Sunday worship for the first time since lockdown began.

A church in Hampshire saw a vicar lead its service from a car park, with worshippers asked to sing within their cars with members of their own household.

In Darlington, a drive-in church service was held in the car park of a local rugby club.

Around 40 cars full of worshippers gathered outside a village hall in Swanmore, Hampshire, to hear music and listen to the words of the minister.

The 51-year-old reverend Claire Towns said: ‘We decided that we wanted to offer people the chance to sing, as that is an important part of Christian worship.

‘We thought we would offer a drive-in service that revolved around singing – as well as our first act of public worship in the church itself.’ 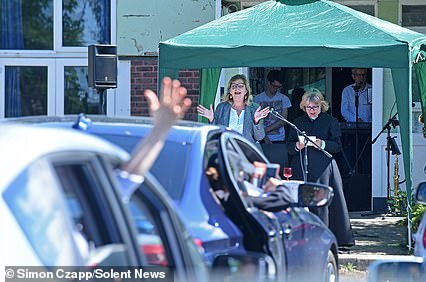 Hants, along with lay minister Sally Beazley, 55. A church today hosted its first ever drive-in service, with a vicar leading the event from a car park

Restrictions regarding singing were overcome by the congregation at St Barnabas Church in Swanmore, Hampshire, by holding a drive-in ‘Songs of Praise’ service.

Around 40 cars gathered in the village hall car park on Sunday morning to take part in the event, led by Reverend Claire Towns.

Participants were asked to book places beforehand, choose their favourite hymns and songs and sing within their cars with members of their own household.

Rev Towns said: ‘We decided that we wanted to offer people the chance to sing, as that is an important part of Christian worship.

‘For people in the village, it’s another sign that the church is at the heart of this community.’

Canterbury also laid out chairs for some 200 attendees today who had come to see Archbishop Justin Welby speak.

Many were unable to come, however, as social distancing meant the cathedral had to work at ten per cent capacity.

‘We’re all set to welcome you to this morning’s first post-lockdown Eucharist’, they said on social media.

‘Everyone is hugely excited about reopening for worship’, the very reverend Robert Willis told The Guardian.

‘We’ve kept absolutely to the rules, but nothing takes the place of being physically together.

‘When I started broadcasts each morning in the garden, I had a sense of being cross (about being unable to enter the cathedral).

‘But within two or three days, it felt like a lovely new dimension – a new way of communicating with people.’

Salisbury cathedral also threw open its doors for worship today, although they had to book online before attending a service.

‘Today we will have public worship in our cathedral for the first time in over three months,’ they said online, brimming with excitement.

‘We are delighted that public worship will be allowed to resume again.’

They held a Eucharist at 9am followed by a second Eucharist at 11am, with services held back-to-back to allow as many people to attend as possible.

The Very Revd Nicholas Papadopulos, Dean of Salisbury, said: ‘Salisbury cathedral was built to the glory of God and for the worship of God, so the resumption of public worship here is an occasion of huge significance and immense joy.

‘In the weeks ahead all are welcome to join one of our services as we give thanks for all we’ve learned, grieve for all we’ve lost, and commit ourselves to our shared future with hope.’

The cathedral, which also holds a copy of the Magna Carta, will re-open to the public on Wednesday July 8. 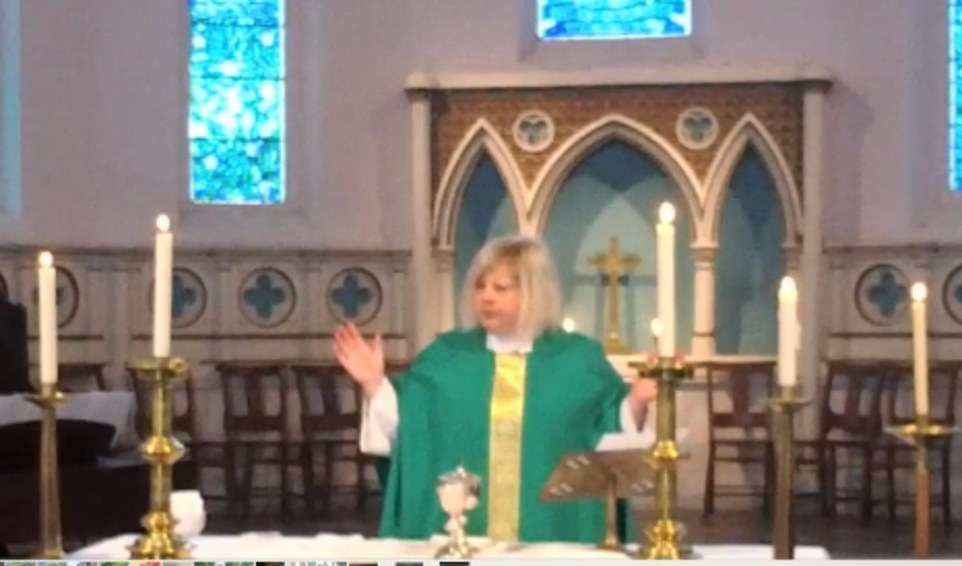 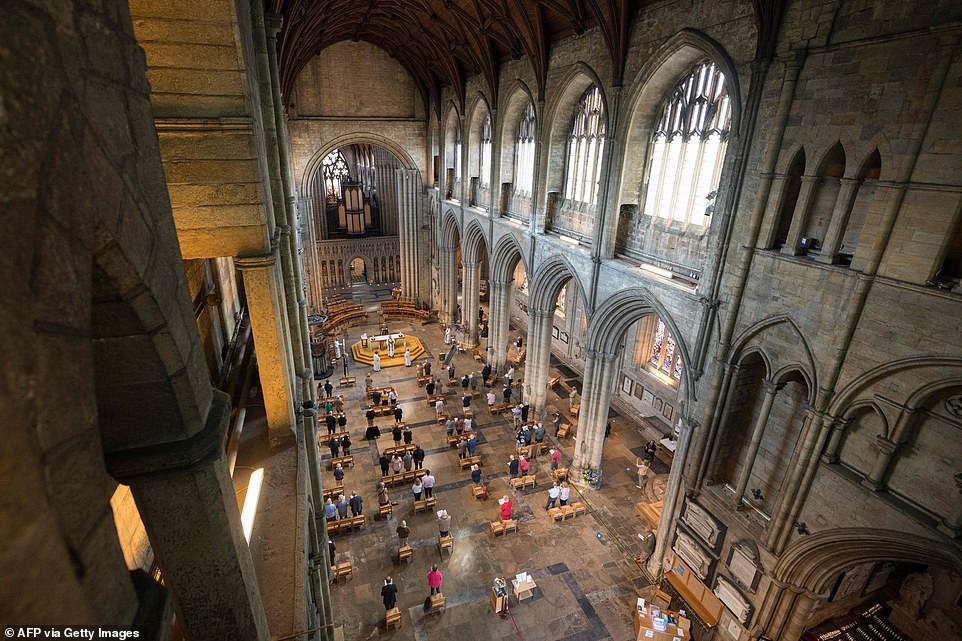 RIPON CATHEDRAL: Worshippers stand for a reading at the 473-year-old building. Social distancing was observed at all times 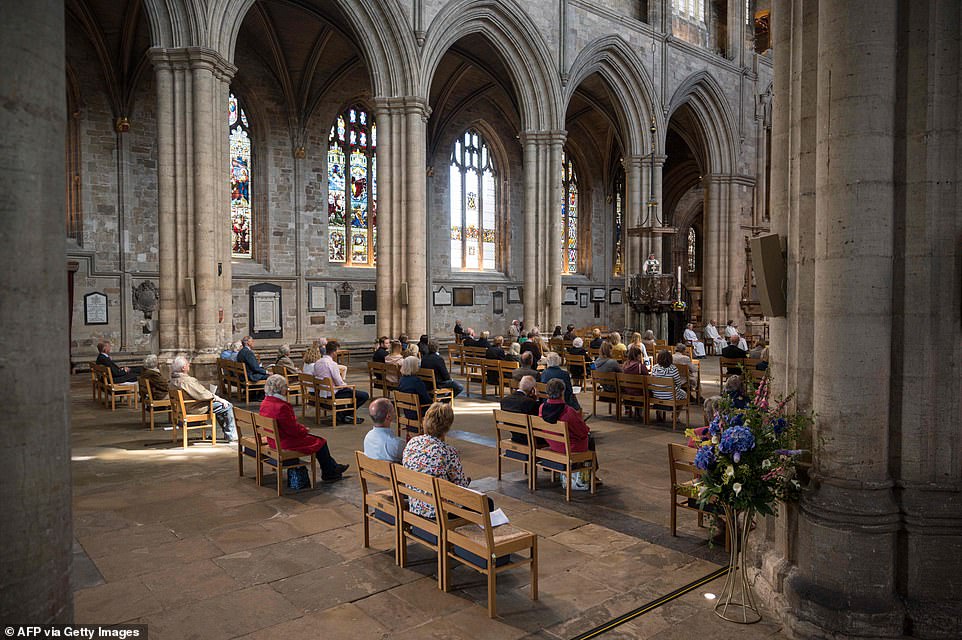 RIPON CATHEDRAL: Seating for the congregation inside the Nave has been significantly reduced due to the pandemic

How have church services changed?

Holy Communion? Guidance states that bread should be pre-divided, and that bread and wine should not be spoken over. They also suggest that priests should drink all the wine that has been consecrated.

Singing? This is not permitted owing to fears it may spread the virus. A church in Hampshire got around this by holding its service in a car park

Seating? The Church of England is observing two-metre social distancing in all its buildings, reducing capacity.

Among churches thrilled to reopen this morning was St Michael’s in Stockwell, London, which welcomed back its 85-strong congregation, although half had to watch through the internet.

Its vicar, Erica Wooff, said: ‘Well, I was expecting five, hoping for 20 and 40 came, with two children. Allelulia! 50 per cent capacity.

‘We did it. We followed all Church of England guidelines, and we live-streamed the service.

‘With 45 watching there. So that’s pretty much 100 per cent return. Deo gratias.’

The vicar in Chelmsford, Jane Yeadon, said it was simply ‘wonderful’ to be leading a service in church this morning.

All Saints in Leamington Spa also re-opened, and received a congregation both online and physically. It posted photos online of chairs placed in pairs with two metres between them, showing it was ready for the service.

However, despite the excitement many religious buildings kept their iron gates bolted.

Durham Cathedral has decided to wait until later this month, although members of the public may still visit for private prayer and quiet reflection providing they maintain two-metre social distancing.