What’s open and what’s closed: Cinemas, large pubs, and clubs, major restaurants and even Sydney’s iconic Opera House shut  under new ban on non-essential indoor gatherings – so how will it affect YOU?

The Australian government has demanded large pubs, cinemas, night clubs, museums and large restaurants are closed to combat the coronavirus.

Speaking to the nation on Wednesday morning, Prime Minister Scott Morrison effectively banned all places where 100 people or more meet.

This is likely to force large bars and restaurants to close across the country, as well as Sydney’s world-famous zoos and aquariums.

He warned the drastic measures could be in place for up to six months, as Australia enters war-time measures not seen since the First World War.

This does not apply to ‘essential’ gatherings, which includes public transport, medical facilities, prisons, parliaments, supermarkets, and shopping centres.

Mr Morrison said there would be no quick fix to deal with the COVID-19 crisis, and warned that ‘tens of thousands of jobs’ could be lost.

‘We are looking at a situation of at least six months for how we deal with this, he said.

‘It could be much longer than that.’

The move could force the closure of some of the country’s most renowned restaurants. 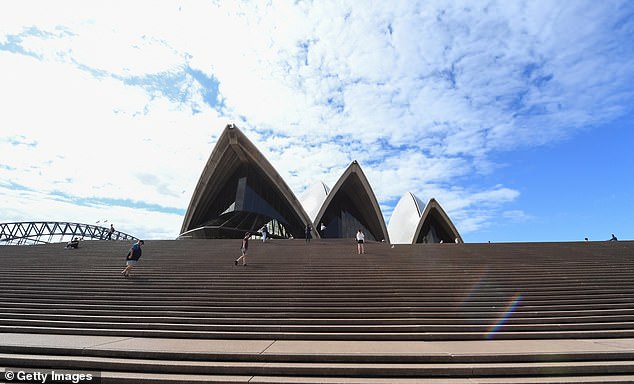 Large pubs and restaurants across Australia will be forced to close if they hold more than 100 guests.

Sydney’s Mr Wong restaurant in the city’s CBD seats 240 people, which means it would break the rules.

The Sydney Opera House announced it has cancelled all performances until at least March 29, but this is likely to be extended.

Ticket holders will be refunded.

Melbourne’s Princess Theatre has also been forced to close, affecting all performances of the award-winning Harry Potter and the Cursed Child play.