Circus performer, 29, is paralysed on one side after practicing a new move on aerial silks

A circus performer was left paralysed on one side of her body after falling on her head during an aerial move.

Nina Jussila was practicing how to drop from aerial silks when she fell 13ft and landed head first on March 7 this year.

Unable to feel anything, the 29-year-old was rushed to hospital, where an X-ray revealed her fifth vertebrae was dislocated, putting a dangerous amount of pressure on her spine.

Surgeons operated to release the pressure, with Miss Jussila, who lives in Norwich, being forced to stay awake throughout the procedure to ensure no permanent damage was done to her backbone.

Although the surgery seemed to go to plan, Miss Jussila later discovered she could only feel pain on her left side but could only move her right. She was diagnosed with the neurological condition Brown Séquard syndrome (BSS).

After intensive physiotherapy, Miss Jussila walked by herself for the first time since the accident on May 10 and hopes to one day perform again. 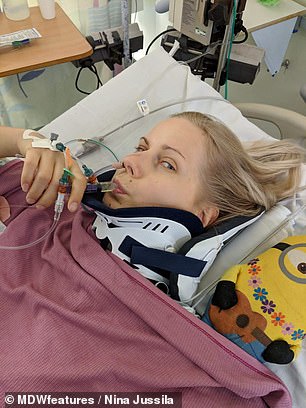 Nina Jussila, a circus performer, was left paralysed after falling on her head during an aerial move. Miss Jussila landed on her head from the 13ft drop, unable to feel anything. She is pictured left performing before the ordeal and right arriving at hospital on the day of the fall 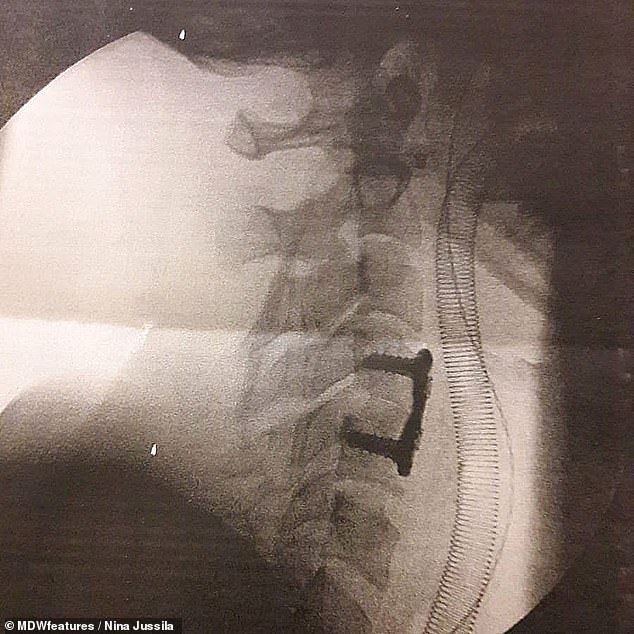 A scan revealed her fifth vertebrae was dislocated, which was putting a dangerous amount of pressure on her spinal cord. The X-ray shows a disc that was fitted to strengthen her backbone

Speaking of the ordeal, Miss Jussila said: ‘On March 7, 2019 I fell 13ft when trying to learn a new trick on aerial silks.

‘My head hit the mat first, then the rest of my body fell on top of it.

‘It all happened so fast, I just realised I had made a mistake then the next thing I know, I landed on my neck.

‘I screamed out that I couldn’t feel my body, and luckily I had friends around me to call an ambulance and keep me calm.’

Miss Jussila, who is originally from Finland, was rushed to hospital where she immediately underwent scans.

‘My fourth and fifth vertebra were damaged badly,’ she said.

‘The disc between them was fully gone and the fifth vertebra was dislocated, which put dangerous pressure on my spinal cord.

‘If there was any more pressure, I could have been completely paralysed.’ 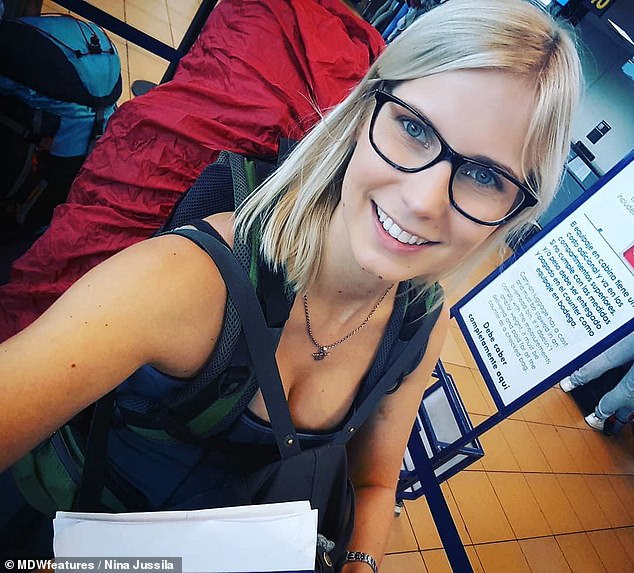 Pictured before the fall, Miss Jussila was practicing a new move on aerial silks at the time 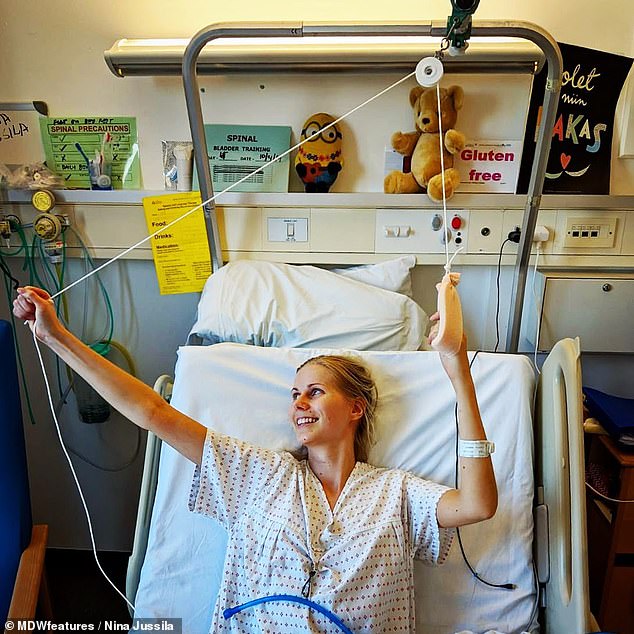 Her left side was initially paralysed, however, she is gradually regaining movement 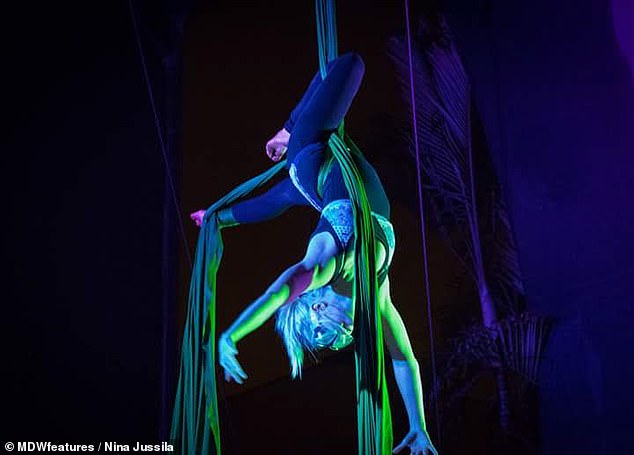 Pictured before the ordeal, it is unclear if Miss Jussila will ever perform her tricks again

Miss Jussila went under the knife that same day in a seven-hour operation to relieve the pressure on her spine.

‘First, they needed to get my fifth vertebra into the right place to release the pressure, which they had to do when I was awake to make sure my spinal cord would not be damaged,’ she said.

‘After that was done, they took a piece of bone from my hip and put it between the vertebras to fuse my spine, and then they added a metal disc to support it all.’

On March 21, Miss Jussila was able to move her left hand again, however, doctors insisted she still spend five weeks on bed rest.

‘I just needed to rest by lying on my back and not moving my spine at all,’ she said. ‘After that, I could start sitting and eventually try to stand and walk too.

‘My body started to recover right away, only a tiny bit, but those improvements kept me going.

When people are paralysed, it affects their physical abilities but also affects the internal organs as well.

‘I needed to learn how to breathe and cough properly and how to use my bladder again.’ 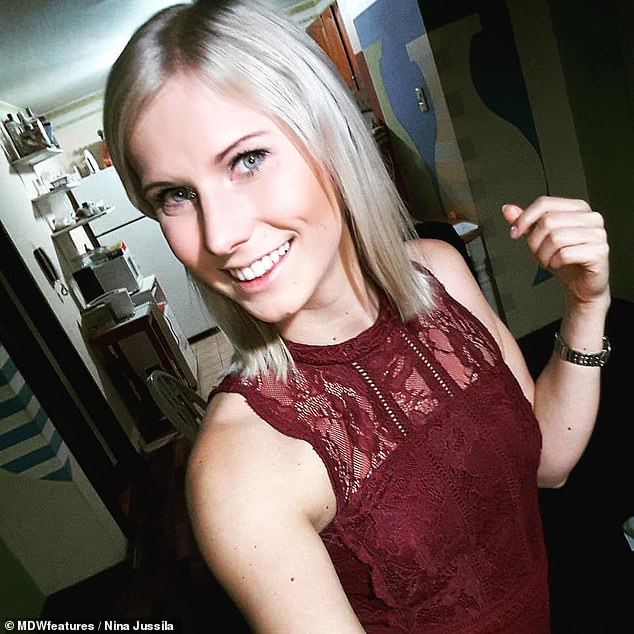 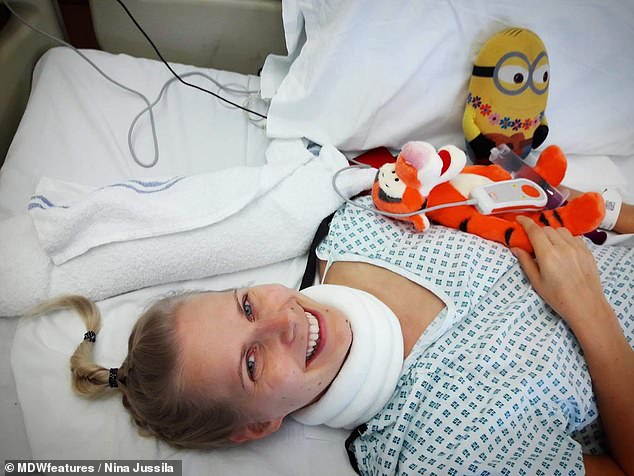 Her dislocated fifth vertebrae was realigned to relieve pressure on her spine. A piece of bone was also taken from her hip and put in between her damaged vertebrae to fuse her spine. She is pictured during her five week bed rest, where she ‘was not allowed to move’ 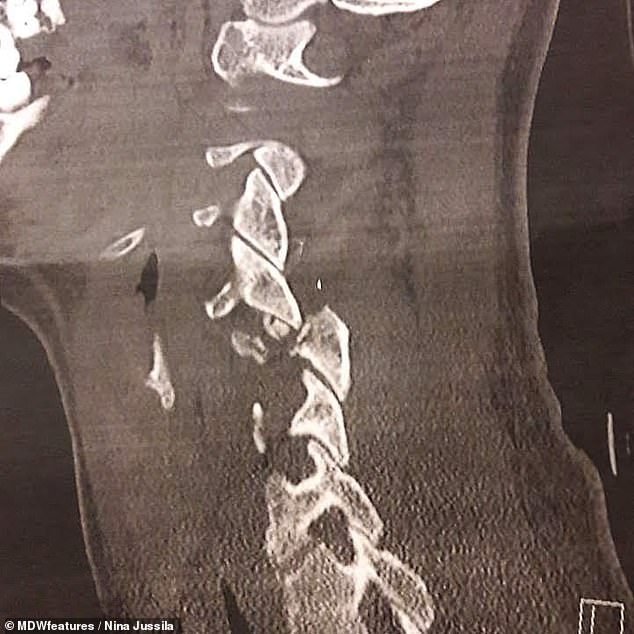 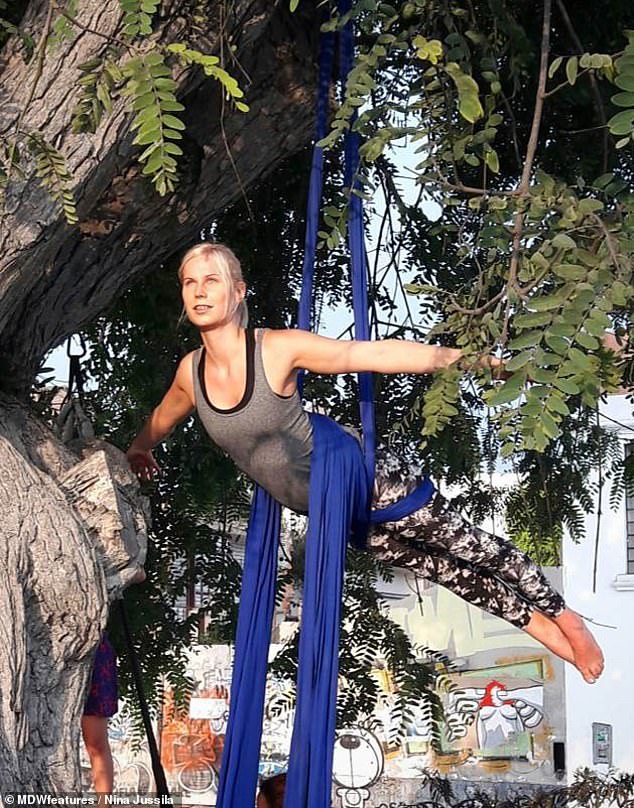 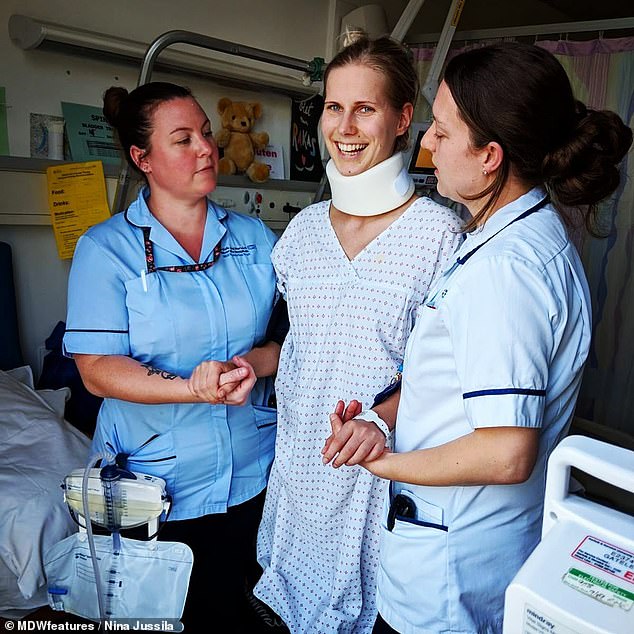 WHAT IS BROWN-SÉQUARD SYNDROME?

Brown-Séquard syndrome (BSS) is a rare neurological condition that causes weakness on one side of the body and a loss of sensation on the other.

It is brought on by an injury to one side of the backbone, which causes it to become damaged but not completely severed.

This may come about from a spinal tumour, trauma (such as a puncture wound), obstruction of the blood vessels, an infection (like tuberculosis), or an inflammatory condition (such as multiple sclerosis).

BSS is a rare disorder that affects just two per cent of all traumatic spinal-cord injuries.

These injuries affect between 30 and 40 in every million people every year.

Sufferers typically lose the sense of touch, vibrations or position below their injury.

The sensory loss is particularly strong on the same side as the injury to the spine.

On the opposite side, sufferers may experience a loss of a sense of pain and temperature.

There may also be loss of bladder or bowel control.

Paralysis on the same side as that of the injury often occurs.

This can be permanent if treatment is delayed.

However, more than 90 per cent of patients recover the ability to walk.

Treatment depends on the underlying cause. High-dose steroids may be useful.

Braces, limb supports and wheelchairs can help patients carry on with their day-to-day lives.

While recovering from surgery, Miss Jussila was diagnosed with BSS. This is said to have occurred due to the damage to Miss Jussila’s spinal cord.

‘My right side works almost normally but there’s no sensation on that side, like hot, cold or pain,’ she said.

‘Whereas my left side was paralysed but my skin can feel a lot more on that side.’

Months on, Miss Jussila’s left side is still weaker than her right, however, she has regained movement in her left leg.

‘Luckily my body started to recover little by little right after the accident, and after the successful operation, and every day it works a little bit better,’ she said.

‘My left side is still much weaker, but I’m grateful my left leg has started working so well, whereas my left arm still needs work.

‘On my right, I still can’t feel senses, maybe I’ll get it back one day but possibly not.

‘Pain on the right side feels like a tickle, so I need to be careful that I don’t hurt myself by accident.

‘For example, when I stretch my muscles, I can’t feel it so there’s a danger that I could stretch too much and damage my muscles.’

Miss Jussila is working alongside physiotherapists, who are helping her relearn how to walk and use stairs.

But there is still a long way to go before she is back to doing the circus arts she loves.

‘At the moment, I couldn’t do aerial silks, but I hope the day will come when I can do it again as I love being up in the air,’ Miss Jussila said. ‘I do believe that day will come.’

She is speaking out to encourage others not to give up when things get tough.

‘It’s important to celebrate every little success, don’t think if they’re small then they shouldn’t be appreciated,’ Miss Jussila said.

‘Find your motivation for why you want to continue. For me, and many others, it’s family and dreams haven’t yet happened.’ 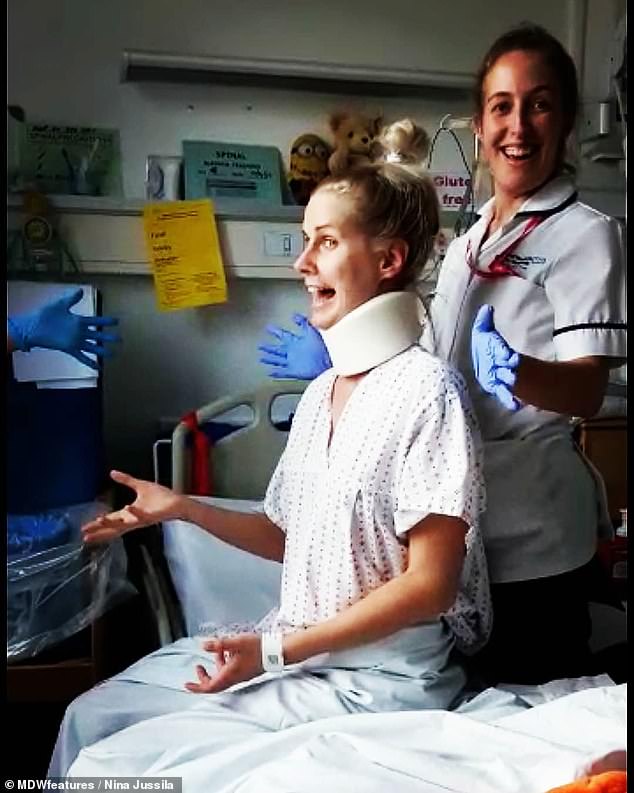 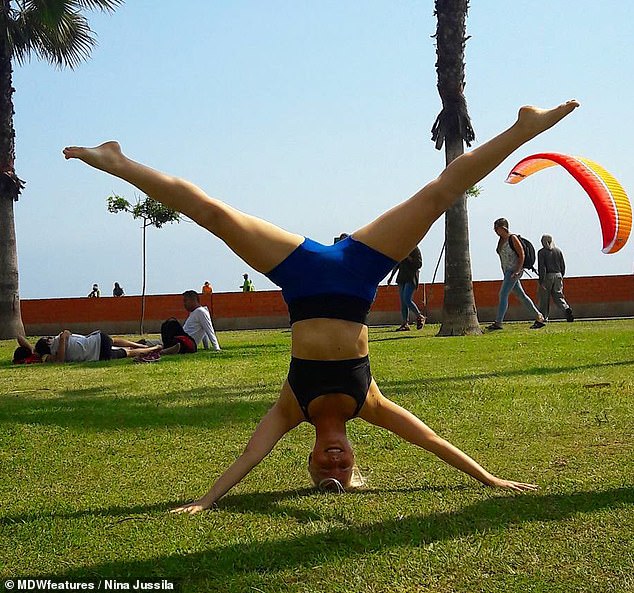 Miss Jussila is pictured doing a headstand in March, the same month of her accident 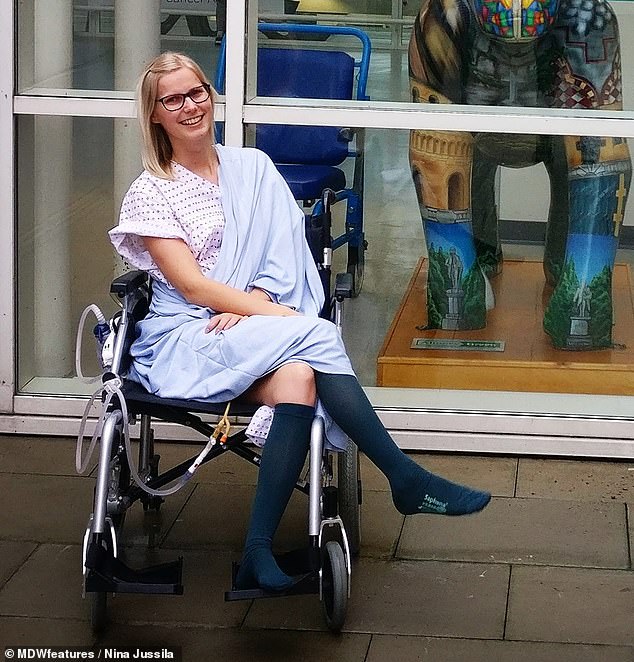 With physiotherapy, Miss Jussila has become strong enough to use a wheelchair