Quit clowning and help us, say circuses as clowns, acrobats and trapeze artists deliver a letter to Downing Street saying they have ‘two weeks before the end of the road’

With their 250 year tradition at risk, the circuses knew what they had to do: send in the clowns. And the acrobats, trapeze artists and even a human cannonball.

More than 50 performers from some of the UK’s top circuses made Downing Street resemble a Big Top on Tuesday as they delivered a letter to Boris Johnson calling for urgent action.

They want the government either to include circuses in its arts rescue plan or give them the right to reopen – and warned that circuses could collapse in a fortnight without support.

The protest included a human cannonball called Eddie and the cannon from which he is propelled through the air during performances.

He held a banner that said: ‘I am a human cannonball please don’t let me get fired’.

Sabina Najimusdnova performed the splits while balancing on one hand on a pole on top of a suitcase.

Tightrope walker Ksenia Archer stood on top of a large ball holding a banner that read ‘2 weeks to save the circus’.

There are around 30 circuses in the UK which attract annual audiences of 20 million people.

Since lockdown began, the Association of Circus Proprietors (ACP) – the body for professional circus producers and performers which organised yesterday’s march – estimates around 3,900 circus shows have had to be cancelled.

The letter, from the ACP’s chairman Martin Burton and supported by 18 member circuses from around the country representing over 500 circus professionals, said: ‘Sadly, circuses seem to have fallen through the cracks of all the rescue package schemes – we pay rent to individual landowners as we tour – and do not have business rateable properties.

‘In addition no commercial circuses have qualified for the any of the £160m emergency Arts Council funding despite generating significant income to the economy through the 30-plus UK circuses and internationally visiting shows such as Cirque du Soleil which combined are seen by around 20 million people a year.

‘Its greatest slogan ‘The Show Must Go On’ could well become a thing of the past if urgent assistance is not forthcoming.

‘Please save the Circus – we have two weeks before the end of the road.’ 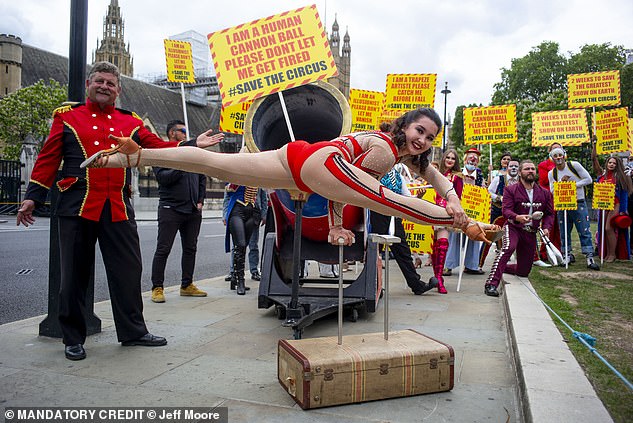 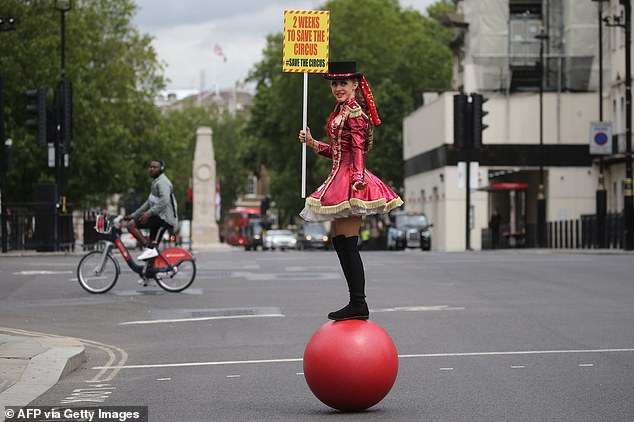 It added that circuses perform in mobile Big Tops ‘which unlike theatre buildings have excellent ventilation’ via their flexible and airy design ‘which can be further enhanced by raising the tent sidewalls’ and easily reconfigured mobile seating, all ideal for social distancing.

Among those on the peaceful protest yesterday was Doc Haze, ringmaster of the Circus of Horrors which also usually performs at major festivals including Glastonbury, said: ‘We’ve been left behind.

‘The circus is many young people’s introduction to live performance art and then they go on to see other things, but we have been forgotten about.’

One performer held a banner that said: ‘I am a trapeze artist please catch me before I fall’, while another’s read: ‘I am an illusionist please don’t let me vanish’.