Cirque du Soleil reopened their show VOLTA Friday evening with a touching tribute to the aerialist who died after falling on stage last month.

Yann Arnaud, 38, plunged about 20 feet to his death during an aerial straps routine in Tampa on March 17, shocking spectators and closing the show for several performances.

The circus troupe reopened their postponed show in New Jersey with a speech to honor Arnaud as they embarked on their first performance without him.

Cirque du Soleil reopened their show VOLTA Friday evening in New Jersey, pictured above, after postponing the tour due to the death of 38-year-old aerialist Yann Arnaud 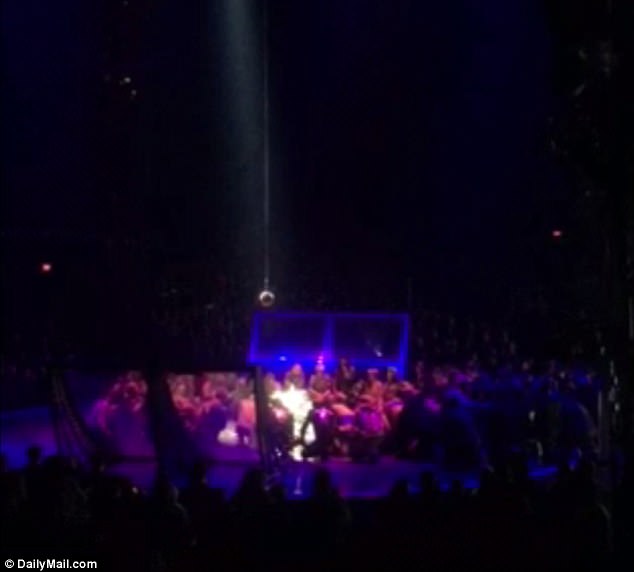 The show was dedicated to Arnaud who died after falling on stage during an aerial straps routine. His co-performers surrounded a wreath dedicated to him on stage on Friday, above 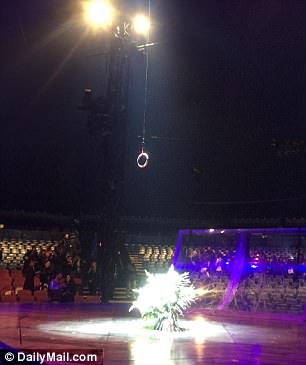 The show opened with a speech dedicating the performance to Arnaud, and closed with a moment of silence by performers, right, hugging and shedding tears in a circle

The evening started with a speech, dedicating the show to the aerialist.

‘Yann loved to perform. He performed in Paris, in Las Vegas, many cities around the world. In our production of TOTEM and more recently in VOLTA and he gave joy to many, many people. And I believe it is the only way to bring honor to him by also doing what we love. To inspire dreams to touch hearts, and share with you our entertainment,’ a speaker said at the beginning of the performance.

‘So I’m going to ask for your love and support tonight to raise the roof with your applause in celebration of Yann. On behalf of the VOLTA family, our largest Cirque du Soleil family. I have the great honor to dedicate this show to our Superman, our hero, our papa, Yann Arnaud. Yann, this is for you!’ he added.

The crowd then erupted in cheers in memory of Arnaud.

The show ended with a wreath being brought out to center stage and dedicated to the aerialist.

The performers kneeled around the wreath on stage to share a moment of silence.

Many of the artists hugged and shed tears as a photo of Arnaud was splashed across the stage.

The circus postponed their New Jersey performances after Arnaud’s passing. The show was originally supposed to premiere in New Jersey on March 29 and run through April 18. A new schedule announced the show would debut on April 21 and run through May 6.

A week after Arnaud’s death Cirque du Soleil shared the loss of the artist on their social media pages. Arnaud lost his grip on a strap, causing him to plunge about 20ft onto the stage. He died from his injuries hours after the accident during a performance of its show VOLTA in Tampa 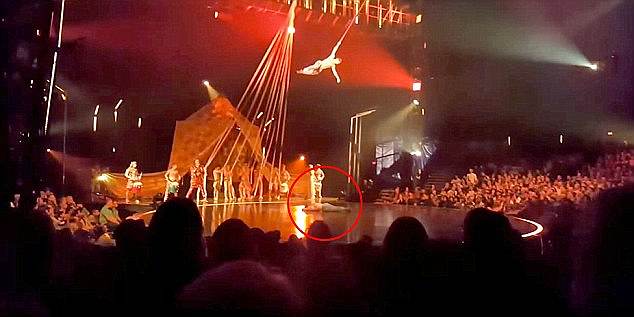 Ben Ritter, who was attending the performance, said Arnaud was ‘out cold and not moving’ the minute he hit the stage (pictured)

‘This past week, the Cirque du Soleil family experienced a great loss with the passing of Yann Arnaud: father, husband, friend and artist. While we continue to grieve, your words of condolence have been a great comfort to all of us during this time. We thank you for your support,’ the post said.

Arnaud died after an aerial straps routine went wrong, causing him to fall.

He died from his injuries at Tampa General Hospital hours after the horrific incident on the touring show.

‘While he was performing the aerial straps number, long-time aerialist, Yann Arnaud, fell onto the stage,’ the statement from Cirque du Soleil read after the fatal performance.

‘Emergency procedures were immediately activated and Yann was transported to the nearest hospital, where he later passed away from his injuries,’ the statement added.

Just hours before his death, Arnaud posted excitedly about getting to debut his ‘straps duo act’ with aerial artist Pawel Walczewski.

‘After so much work and training and staging, our straps duo act is finally in the show tonight,’ Arnaud wrote in the caption. ‘It’s time to go for it.’ 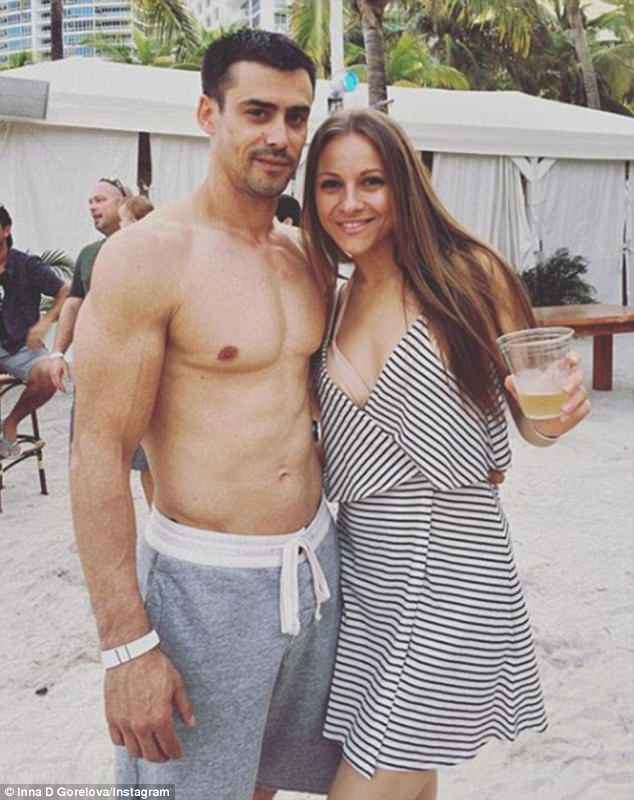 An announcer dedicated the New Jersey premiere to Arnaud saying: ‘I have the great honor to dedicate this show to our Superman, our hero, our papa, Yann Arnaud. Yann, this is for you’ Fellow Volta performer Fred Oliveira shared an Instagram story of him and Arnaud in full makeup before their show on March 17, happily smiling for the camera (pictured) VOLTA, a touring show, has been in Tampa since mid-February. It was scheduled to debut in New Jersey on March 29 but was postponed to premiere April 21

Yann Arnaud is the second Cirque du Soleil performer to die during an onstage performance in the company’s 34-year history.

The first was Sarah Guyard-Guillot, a French acrobat and aerialist who fell to her death in a Las Vegas show.

Guyard-Guillot, who had 22 years experience, was appearing in the show Ka when her harness slipped from its safety wire.

The veteran performer, who was 31 years old at the time, plunged around 90 feet and died from her injuries in ambulance on the way to the hospital.

In 2009 Oleksandr Zhurov was killed after he fell off a Russian swing while training at the Cirque du Soleil headquarters in Montreal.

The 24-year-old, who was from Ukraine, died from head injuries.

Most recently, crew worker Olivier Rochette was struck and killed by a lift while he set up the stage for a production of the show Luzia in San Francisco.

Following a spin with Walczewski, Arnaud appeared to lose the grip on his strap, leading to his fall of about 20 feet.

Ben Ritter, who was attending the performance, said Arnaud was ‘out cold and not moving’ the minute he hit the stage, according to the Tampa Bay Times.

One man in the audience told WFLA that Arnaud was visibly ‘struggling to keep his grip right before the fall’.

New York Yankees outfielder Shane Robinson, who is in Tampa for Spring Training, was also in the audience.

He tweeted this morning that he ‘couldn’t stop thinking about the guy who fell last night. Praying that he’s gonna be okay’.

The performer hailed from Champigny-sur-Marne, France and lived in Miami with his wife Inna Gorelova and two young daughters.

He had worked with Cirque du Soleil for more than 15 years and was called ‘one of the most experienced artists in the troupe’.

Arnaud joined the VOLTA show in 2016, a touring show, that was based in Tampa since mid-February. Its last two performances were supposed to be on the Sunday following his death.

The ‘adventurous’ show was inspired by ‘action sports’ and features BMX riders, rope skipping, and acrobatic ladders, according to its website.