A mother-of-two who ‘chops vegetables’ to de-stress and once stole a senior colleague’s cowboy boots is set to make history as she becomes the First Lady of Wall Street.

Citigroup has become the first big Wall Street bank to appoint a female CEO after naming Scottish-born Jane Fraser as its next boss.

The married mother-of-two – who described pursuing a career while bringing up children as ‘the toughest thing I have ever had to do’ – will next year become the first woman to lead one of America’s biggest banks.

Born in St Andrews, the 53-year-old has degrees from Harvard Business School and Cambridge University.

She has worked at Citi for 16 years, and is its president and the boss of its sprawling consumer bank.

In a recent interview, Fraser revealed she ‘chops vegetables’ to help her switch off from work, while sources told the Financial Times last year she enjoys practical jokes and once stole a senior colleague’s cowboy boots so he was left without shoes.

In 2015, Fraser faced a sexist backlash in the Mexican press when she was put in charge of Latin American operations for Citigroup.

She later told a CNN podcast how she embraced her femininity, adding:  ‘My husband took me out, he said ‘We’re going to buy an elegant red dress, slightly higher heels than you’re used to, and a new haircut, and you’re going to stride on the stage.’

In 2008, Fraser’s husband, Cuban-born Alberto Piedra, quit hit post as head of global banking at Dresdner Kleinwort to look after their children and support her career.

She will replace Mike Corbat, 60, who is stepping down next February after 37 years at Citi, including eight at the helm.

Citigroup has become the first big Wall Street bank to appoint a female CEO as its retail banking chief Jane Fraser (pictured) takes over from Michael Corbat, who said only last year that he would not be replaced by a woman

Jane Fraser, 53, was born in Scotland and educated at Cambridge University in England where she studied Economics.

After graduating, she started her career as an analyst in M&A for Goldman Sachs in London.

She then became a brokerage associate for Asesores Bursatiles in 1990 in Madrid before moving to McKinsey.

In 2004, she joined Citi where she took on various roles rising up the ranks including leading the bank’s strategy division through the financial crisis.

She then moved to the Miami/Fort Lauderdale area with the task of cleaning up the bank’s Latin America division.

She moved to New York in 2019 to take on her latest role as president and CEO of Global Consumer Banking her responsibilities include all Consumer businesses in 19 countries, including Retail Banking and Wealth Management, Credit Cards, Mortgages and the associated Operations and Technology.

Her promotion came as she was spied as a potential candidate for a CEO job at rival bank Wells Fargo.

Fraser has spoken in the past about juggling motherhood and her career in finance.

Having children ‘humanized me,’ she said in 2016, recalling how she worked part time at McKinsey after having children.

‘There is nothing like having children to help you understand where your priorities are.’

Fraser had an MBA from Harvard Business School and serves on the Board of Dean’s Advisors at the School.

She is also a member of the Economic Club of New York, the Global Advisory Board at Stanford, and the Council on Foreign Relations.

Fraser becomes the first female CEO of a major Wall Street bank in February and will join the board of directors with immediate effect.

Fraser, who has long been a rising star in the financial services industry, has already made her mark at the lender. During her time as head of the private bank, she increased revenue by more than a fifth between 2010 and 2013.

She started her career at Goldman Sachs and before joining Citi in 2004, Fraser was a partner at advisory giant McKinsey & Company where she also made an impression on colleagues.

Then 26, she said she would only take the job if she could work directly for the head of banking.

Lowell Bryan, who held that position, was so impressed by her forthright attitude that he hired her.

In a McKinsey report, she later said: ‘Being a mother of young children and having a career is the toughest thing I have ever had to do.

‘You are exhausted, guilty, and you must learn how to do things differently. It was the making of me because I became much more 80-20 – focusing on what was really important – got good at saying no, and also became more human to the clients who also face many of these issues too.’

JP Morgan, America’s most profitable bank, may soon be following in Citi’s footsteps as Marianne Lake is widely tipped to become the next boss when Jamie Dimon retires in around five years.

Lake, 51, who is also British, has spoken about the importance of diversity in finance.

Fraser, the Co-Chair for the Citi Women Affinity Group, has spoken in the past about the need for women to break the glass ceiling on Wall Street.

Speaking at the time, she said she had ‘no ambition’ to take the helm.

‘I look forward to seeing a woman being the first CEO of a Wall Street firm, whoever that may be,’ Fraser said in a 2018 interview with CNN.

‘I’ve never had the ambition to be the CEO of Citi or any other organization. Things can change over time. But at the moment, I’ve still got a lot to learn.’

Fraser becomes the first woman to lead a major US bank, after top bosses were hauled before Congress in 2019 to answer to criticism over their lack of diversity among other things.

The shake-up at the top comes as the bank is currently grappling with the coronavirus pandemic and fears are mounting that the economy is tumbling into disrepair.

The company announced Corbat’s retirement and the appointment of Fraser, who currently serves as president and CEO of global consumer banking, to the position of CEO in a statement Thursday morning.

It is not clear what Fraser’s salary will be but Corbat received a total package of $24 million for 2019, including a base salary of $1.5 million, two sets of stock-based compensation at $15.75 million and a $6.75 million cash bonus.

Citigroup said it will announce the successor for Fraser’s role in coming weeks.

Shares in the bank rose 0.8 percent to $51.82 just after trading opened following the news.

Fraser said she was ‘honored’ by the decision and is committed to creating a ‘better bank’. 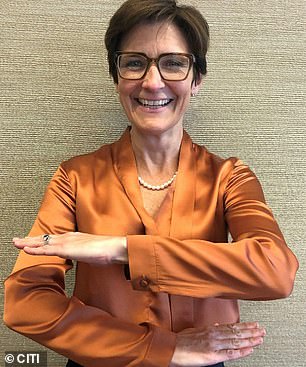 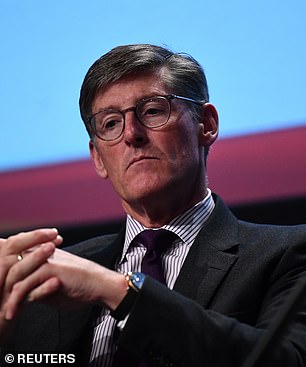 Scottish-born Fraser (left), a 16-year Citigroup veteran, will take the reins in February, when Corbat (right) retires after 37 years at the bank

‘Citi CEO Michael Corbat announced that, after 37 years at Citi, including the last eight years as CEO, he plans to retire from Citi and step down from its board in February of 2021,’ the bank said.

‘The board selected Jane Fraser, currently Citi’s President and CEO of Global Consumer Banking, to succeed him as CEO in February.’

‘I am honored by the Board’s decision and grateful to Mike for his leadership and support,’ Fraser said in a statement.

‘Our balance sheet is strong and our commitment to serving our clients and communities is even stronger. I will do everything I can to make all our stakeholders proud of our firm as we continue to build a better bank and improve our returns.’

Corbat, 60, heaped praise on his successor saying she will make ‘an outstanding CEO’.

‘I have worked with Jane for many years and am proud to have her succeed me,’ Corbat said in a statement.

‘With her leadership, experience and values, I know she will make an outstanding CEO.’

Fraser, who previously held roles in Latin America and investment banking at the firm, had been lined up to take over as CEO when she was promoted to the role of president and CEO of consumer in October.

However, the sudden announcement of Corbat’s retirement comes as a shock to the industry.

The CEO, who took over from controversial former CEO Vikram Pandit in 2012, had been expected to complete another two years in the top job before handing over to a successor. 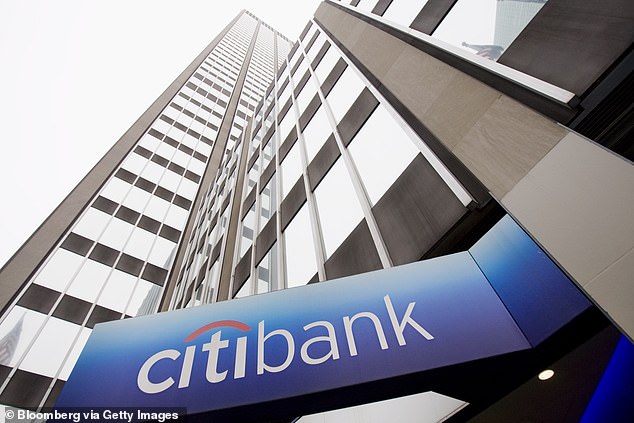 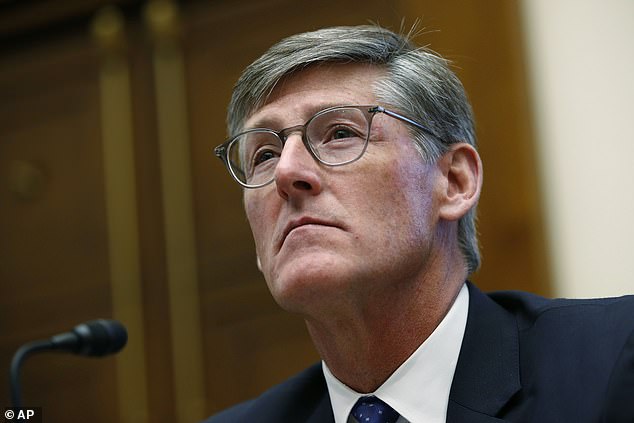 Corbat’s shock departure marks the latest in a string of shake-ups at the top of the third-largest US bank. In 2019 he admitted to Congress he didn’t believe he would be succeeded by a woman 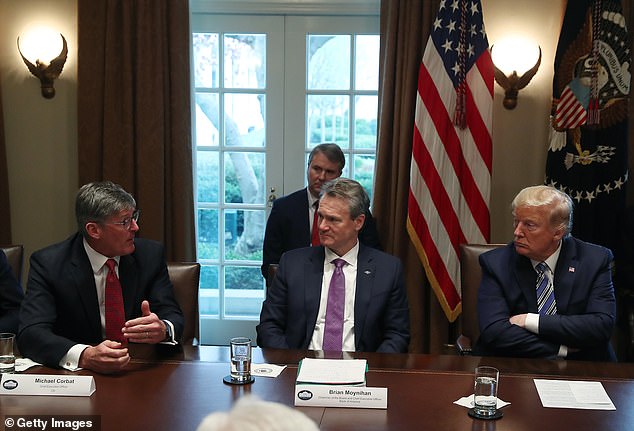 His shock departure marks the latest in a string of shake-ups at the top of the third-largest US bank.

It comes after Jamie Forese, Citigroup’s then-president, stood down after three decades at the bank in 2019, and the exit of its longtime chief financial officer and two regional heads.

Corbat is largely credited with turning around the bank’s fortunes after the global recession, leading it to a net income of almost $20 billion last year – almost triple what it was eight years ago.

Under his watch, the bank has streamlined into two main businesses: the institutional clients group and the global consumer bank.

‘I am extremely proud of what we have accomplished in the past eight years,’ Corbat said in a statement.

‘We completed our transformation from the financial crisis and emerged a simpler, safer and stronger institution.

‘There is always more to do and I believe the time is right for my successor to lead Citi through this next stage of progress.’

However the bank is now facing one of its biggest challenges yet as the pandemic continues to ravage the economy.

Stay-at-home orders forced branches and offices to shutter and the firm switched to serving business and consumer clients remotely.

Meanwhile, with millions of Americans out of work and government stimulus funds drying up, Citigroup – the world’s largest credit-card issuer – could soon be inundated with applications from desperate residents.

Citi shares have fallen 36 percent this year amid the global health crisis – in a year that the bank hoped to narrow the gap with its rival banks.

Fraser’s appointment to the top job marks a sign of progress for the banking sector where white males have long ruled the roost in the C-suite roles.

Her promotion to become the first female CEO of a major US bank is something that none of the leaders of the seven of the country’s largest banks thought likely just one year earlier.

At a hearing of the House Financial Services Committee in April 2019, Corbat and the CEOs of Morgan Stanley, Bank of America, Bank of New York Mellon, Goldman Sachs, JPMorgan Chase and State Street were pressed by lawmakers about the lack of diversity in senior positions. 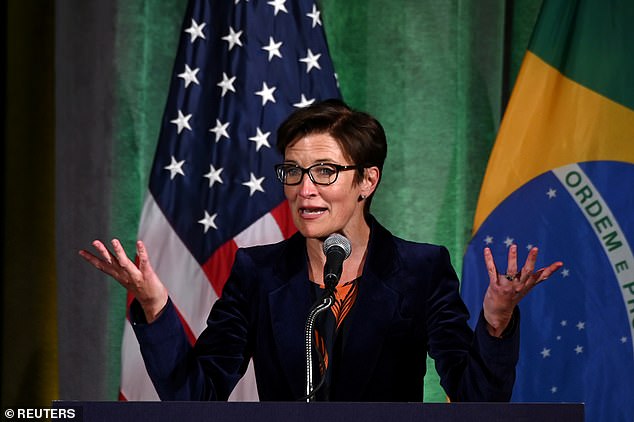 Fraser has spoken in the past about juggling motherhood and her career in finance. Having children ‘humanized me,’ she said in 2016, recalling how she worked part time at McKinsey after having children. Pictured at a Brazil-US Business Council forum in Washington 2019

When asked to raise their hand if any of them believed they would be succeeded as CEOs by a woman or person of color, none of the seven did.

Though none others have yet taken the top job, Fraser joins a number of other successful high-ranking women in finance.

The European Central Bank is currently led by Christine Lagarde, who previously also headed up the IMF.

Janet Yellen led the Federal Reserve from 2014 to 2018 while Marianne Lake was hired as CFO of JPMorgan Chase in 2012.

JPMorgan Chase has shortlisted two women Marianne Lake and Jennifer Piepszak to take over from James Dimon as CEO.