Citizenship test cheats: Migrants ‘pay criminals £2,000 to feed them the answers through tiny earpieces’ so that they can win the right to stay in Britain

Migrants are paying fixers to help them cheat in citizenship tests to win the right to stay in Britain.

The scam, exposed by BBC London News, is the latest in a string of frauds designed to help migrants pass the much-maligned Life In The UK test.

In the exposé, broadcast tonight, an undercover reporter meets with Abdul Reza Masud, who is seen asking the journalist for £2,000 to help him cheat

One migrant worker said panic over being kicked out of the country after Brexit led her to cheat.

One in four applicants fail the test, which covers topics ranging from the constitution and medieval history to art and sport.

In the exposé, broadcast tonight, an undercover reporter meets with Abdul Reza Masud, director of the Ideal Learning Academy in east London. Instead of offering tuition to pass the test, Masud is seen asking the reporter for £2,000 to help him cheat.

Handed a tiny earpiece, the undercover reporter is not searched before he sits the multiple-choice test in a west London centre. Once inside, he is allowed to choose whether he reads the questions, or listens to them via headphones. He picks the latter option – and his small earpiece then picks up the sound from the headphones, relaying the questions to the waiting accomplice. This allows them to tell the reporter which answers to choose.

After passing the exam, the undercover reporter said of the scam: ‘He heard the questions, he answered the questions for me… Third question, he said C, fourth he said D. They really seemed professional in a way.’

One subject brags of his cheating, saying: ‘I did Birmingham, Manchester. I’ve been here for five years and no one gets caught.’ 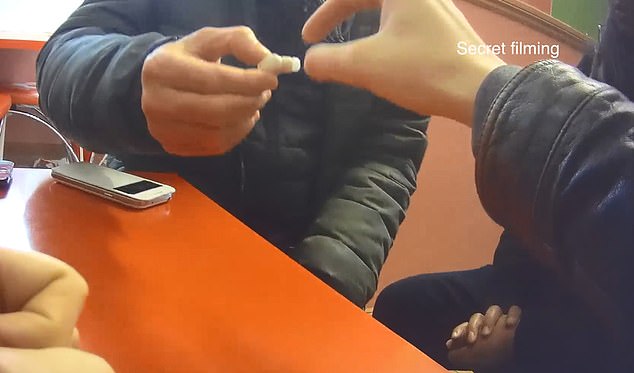 Handed a tiny earpiece, the undercover reporter is not searched before he sits the multiple-choice test in a west London centre

Former immigration officer Jay Sudra told the BBC: ‘The Home Office need to look into this urgently. How many citizens do we have in the UK that have fraudulently obtained a test certificate? It potentially runs into thousands.

‘You have to question the security of the entire process.

In 2014, the Mail revealed a citizenship scam in which migrants who spoke no English were able to buy a certificate for £500 stating they had passed a language test.

That same year, migrants were found to be driving hundreds of miles to a specific test centre. An official report found staff there ‘were colluding with applicants in committing fraud’.

In response, the Home Office tried to tighten the rules by making migrants take citizenship tests at sites near their homes.

A Home Office spokesperson said: ‘Where we have evidence that a test centre is failing to uphold our standards, we will investigate and take appropriate action.’

Masud denied allegations he was running a criminal enterprise when confronted by the BBC. He could not be reached for comment yesterday.

The film can be seen on Inside Out tonight at 7.30pm on BBC One.