Citroen has gone back to the future with its new flagship C5X – a car fit for the French President or a family – and with a boot big enough to carry a washing machine.

Drawing on Citroen’s rich heritage of large luxury cars that waft the driver and passenger along on ‘magic carpet ride’ suspension, the CX5 takes inspiration from the legendary DS and the subsequent CX, XM and most recent C6.

Rolling the dice with what it sees as an update to the concept of the big saloon for the modern age, the French carmaker says the C5X is a stylish fastback mix of saloon, SUV and estate with a keen eye on the large aerodynamic and eye-catching Citroens of decades gone by.

It also promises characteristic comfort thanks to a smooth new advanced active suspension system that helps the car ‘fly over the road’ and maintain sharp cornering, while a spacious interior and uncluttered dashboard recreate a lounge on wheels, with plenty of room in particular for passengers in the rear.

Floating feeling: The C5X promises a characteristic ‘magic carpet ride’ of comfort thanks to a smooth new advanced active suspension system that helps the car ‘fly over the road’ 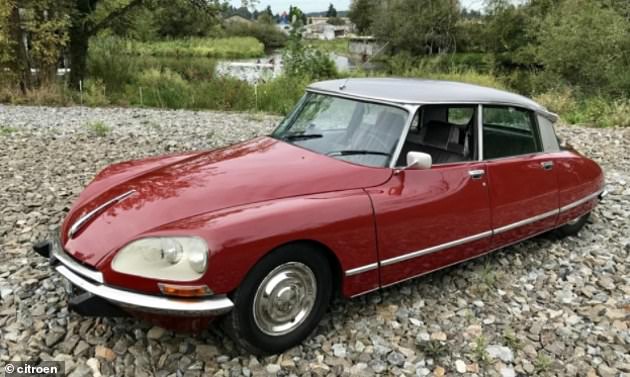 The CX5 seeks inspiration from large luxury Citroens of the past, including the famous DS

Large Citroens have a long-standing link transporting French presidents and ministers, including most notably President de Gaulle in the classic Citroen DS, two letters which when sounded out in French sound like ‘goddess.’

The world premiere of the new CX5 today marks a significant evolution of the classic saloon car which Citroen bosses say would otherwise be consigned to history.

But it is also a gamble that marks it out as the last chance saloon.

Ford announced recently that it was ending production after nearly 30 years next Spring of its long running Mondeo model, blaming changing fashions, the slump in saloon sales and the rise of the family sports utility vehicle. 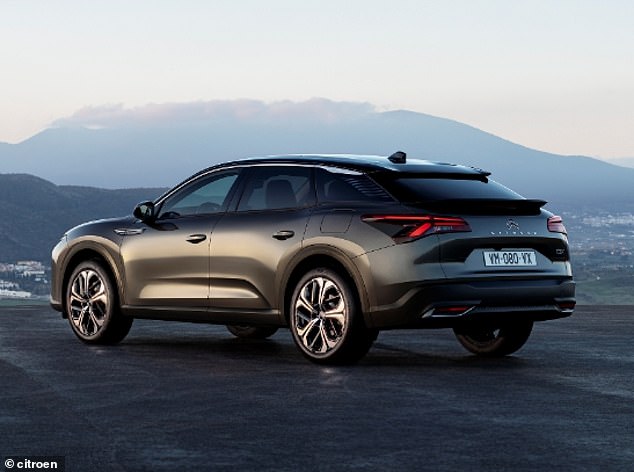 The Citroen CX5 combines saloon, estate and SUV to create a big luxury French car for the 21st century and prices will start at between £27,000 to £30,000

Significantly, however, although there will be petrol and plug-in hybrid (PHEV) versions, there will be no diesel – a fuel which was once dominant in France.

Citroen’s chief executive Vincent Cobée told This is Money and MailOnline that they were so focussed on practicality that a design prototype was tested with a washing machine – to ensure one could fit into the rear and be carried.

We had a very sophisticated tool to check roominess – a washing machine. We made sure it could fit through the tailgate and into the boot

He said: ‘We had a very sophisticated tool to check roominess – a washing machine. We made sure it could fit through the tailgate and into the boot.’

‘Families carry all sorts of things, including washing machines. I told the team: until it fits it’s not signed off.’

Asked if this was Citroen’s ‘last chance saloon’ M. Cobée said: ‘If any saloons are dying it’s because of a lack of creativity. People like touring. We are recreating the saloon with practical elements of the SUV and estate that people like and want.’

Ditching diesel was a ‘cold-blooded commercial decision’ because its market share has slumped ‘especially in the UK,’ from 80 per cent to less than 50 per cent, he said.

The new CX5 enjoys increased ground clearance compared to a saloon and has larger diameter 720mm wheels fitted, on most versions, with ‘tall and narrow’ 19 inch tyres allowing for a higher SUV-like driving position for greater visibility and safety.

Generous boot space extends from 545 litres to 1,645 litres with rear seats down to create a long flat floor.

The rear tailgate ‘offers all the practicality of an estate’ with a wide, functional opening and a low loading sill for easy, practical everyday use and hands-free opening. 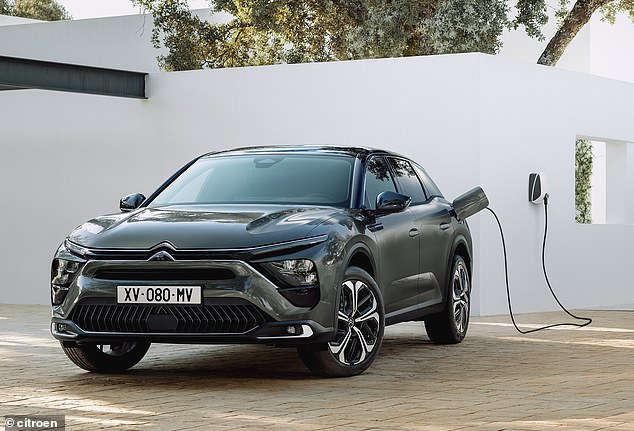 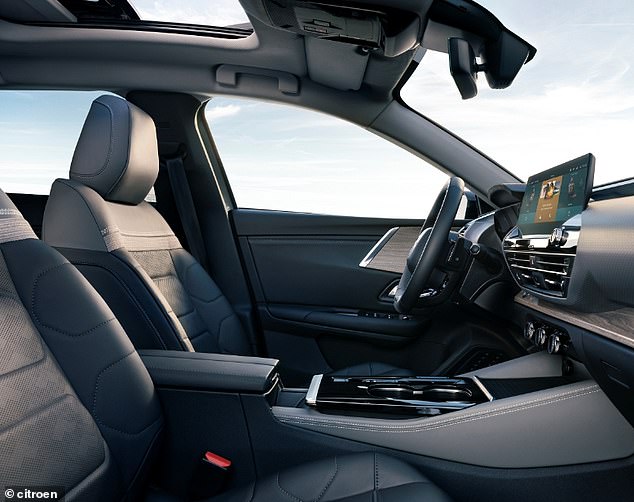 Anew tablet-style 12-inch HD touch screen with natural vocal recognition is the centrepiece of the cockpit, with driver and passenger cosseted in comfortable seats 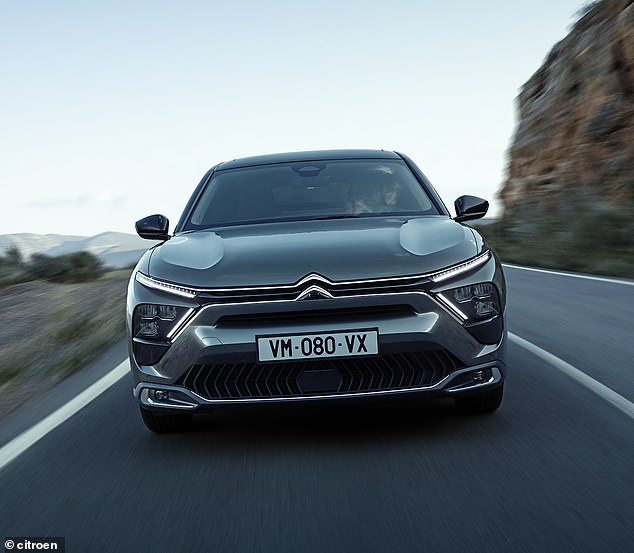 In electric power only, the PHEV has a range of 31 miles and a top speed of 83.7 mph

In addition there will be a 225 horsepower plug-in hybrid (PHEV) model combining the 180hp petrol engine with 80kw electric motor and 13kWh battery.

All will be linked to 8-speed automatic gearboxes.

In electric power only, the PHEV has a range of 31 miles and a top speed of 83.7 mph, which Citroen says is suitable for the majority of daily journeys: ‘It is therefore possible to spend a week without using the internal combustion engine while making your usual journeys, recharging the vehicle as required, at home, at work or at a public charging point.’ 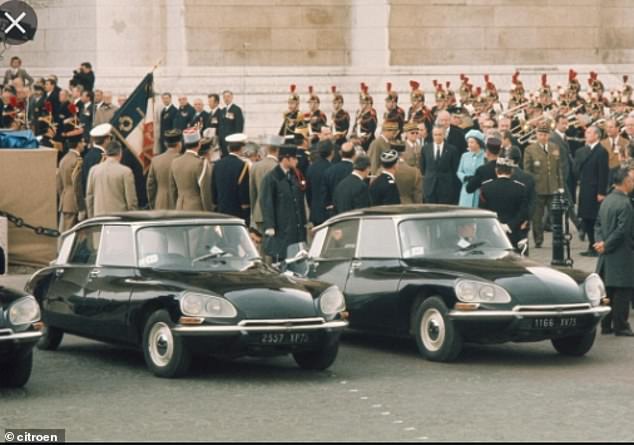 Classic: The C5X takes its inspiration from the large sweeping, aerodynamic and eye-catching Citroens of the mid 1950s, 1960s and ’70s such as the legendary DS 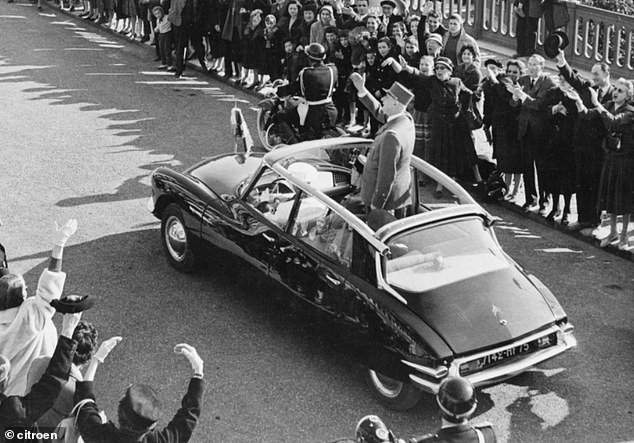 Citroen says the new CX5 ‘breathes new life into the large car segment’ and provides ‘audacity and innovation for a serene touring experience’, noting: ‘C5 X is a unique combination of the elegance of a saloon, the dynamism of an estate and the elevated stance of an SUV’.

The Citroen Advanced Comfort programme creates ‘a passenger compartment worthy of a lounge’, with active suspension and seats. It is ‘an innovative proposition in the purest tradition of great Citroen cars.’

WILL IT FIT IN MY GARAGE

Range on electric power only: 31 miles

Boot space: 545 litres extending to 1,645 litres with rear seats down

The new C5 X features Citroën’s new V-shaped light signature at the front and rear which was introduced on the new smaller C4, with LED headlights and running lights across the whole range.

Citroën design director Pierre Leclercq said: ‘Its innovative styling combines the elegance of a saloon, the dynamism of an estate and the robustness of an SUV.

Its aerodynamic lines and modern light signature make it a true Citroën that is immediately recognisable on the road.’

The passenger compartment is designed to be like a comfortable, calming and tranquil lounge, says Citroen: ‘The Advanced Comfort seats in C5 X are the benchmark for seating comfort, making you feel like you’re at home in your living room’.

Acoustic laminated front and rear windows insulate against outside noise.

The seats have special padding ‘like a mattress topper’ and high-density and thickened structured foam to keep driver and passenger relaxed, even on long journeys: ‘It is designed to recreate the magic carpet effect of iconic Citroën cars and to overcome all obstacles, potholes, kerbs, speed bumps and other road sensations.’

It adds: ‘Roominess is further enhanced by the brightness of the 360-degree glass areas around the car, including quarter windows, and a large opening glass sunroof that allows light to flood in whenever required’.

Citroen boss M. Cobee said five French presidents had used flagship Citroens as their state cars. He would be very pleased if the new C5X could transport a sixth.

But he believed customers and motoring journalists will like it too, adding: ‘Don’t be shy. Bring your washing machine.’