City on edge for funeral of man killed by Sacramento…

California’s capital city is on edge for the funeral of a 22-year-old unarmed black man killed by Sacramento police in his grandparents’ backyard.

The Rev. Al Sharpton plans to give the eulogy for Stephon Clark at Thursday’s funeral at Bayside of South Sacramento church.

He previously called it ‘an atrocity’ that shows the urgent need for intervention against police misconduct and a thorough investigation into Clark’s death.

Some mourners at Wednesday’s wake for Clark predicted increased unrest beyond the unruly but mostly nonviolent protests that have disrupted traffic and two professional basketball games since the March 18 shooting.

The Rev. Ray Morsheth of Sacramento Revival Center said he plans to stay away from the funeral for fear things could turn ugly, while the Rev. Phillip Goudeaux of Calvary Christian Center said it should be a time for peace and forgiveness.

‘I am very concerned about the climate and what’s going on right now,’ Goudeaux said of the high emotions since Clark’s death.

Two Sacramento police officers who were responding to a report of someone breaking car windows fatally shot Clark in his grandparents’ backyard. Police say they thought he was holding a gun, but he was found only with a cellphone. 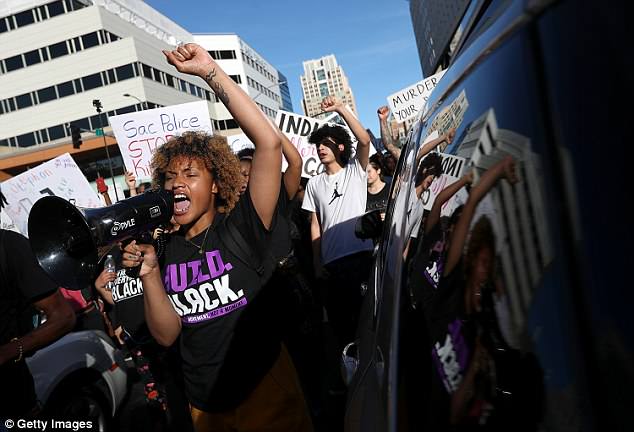 Clark was shot dead in his grandparents’ backyard on March 18 by police looking for a suspect who had been breaking glass. His death has prompted multiple demonstrations like the one above on Wednesday 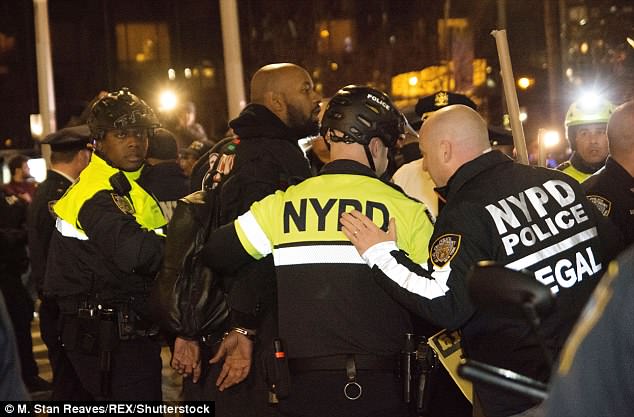 The family’s raw grief was on display when Clark’s brother, Stevante Clark, had to be physically restrained while confronting members of the media gathered outside the wake. The outburst came a day after he disrupted a Sacramento City Council meeting and chanted his brother’s name at Mayor Darrell Steinberg.

Some of Clark’s relatives were more conciliatory.

‘We’re not mad at all the law enforcement. We’re not trying to start a riot,’ said Shernita Crosby, Stephon Clark’s aunt. ‘What we want the world to know is that we got to stop this because black lives matter.’

‘I just hope it can bring people together,’ she said of the two-hour funeral set to begin at 11 a.m. ‘Emotions are heightened, but I just hope everyone comes and shows compassion.’ 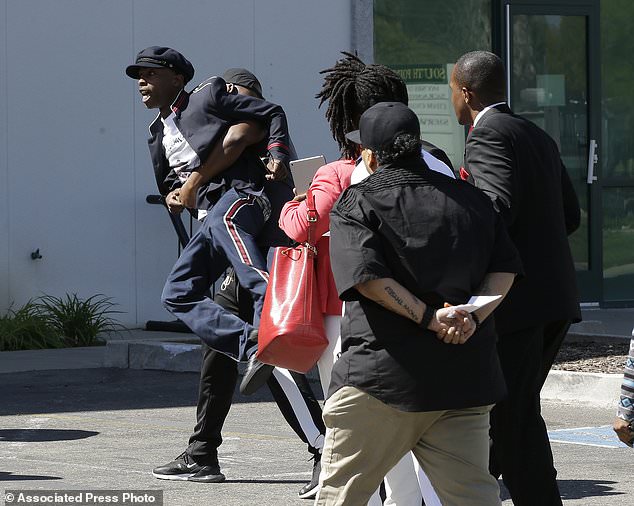 Stevante Clark, Stephon Clark’s brother, had to be carriedinto the Bayside of South Sacramento Church on Wednesday when he confronted media covering his brother’s wake 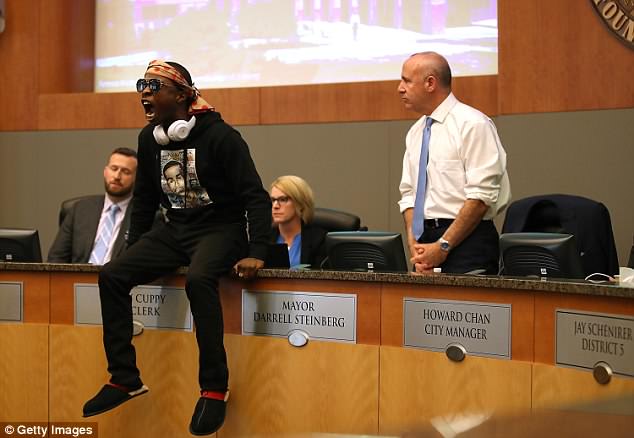 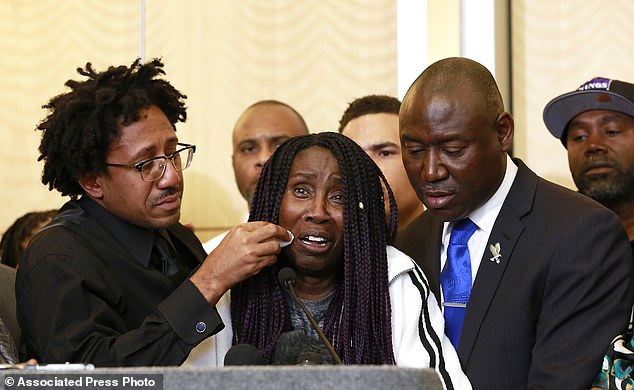 As Sequita Thompson, center, discusses the shooting of her grandson, Stephon Clark, Clark’s uncle, Curtis Gordon wipes a tear from her cheek during a news conference on Monday

Authorities are working to avoid a repeat of the protests that have twice blocked fans from entering the NBA arena downtown for Sacramento Kings games. The police, the Kings and Steinberg’s office met Wednesday to discuss security ahead of Thursday night’s game. Sgt. Vince Chandler said officers would be ready to respond in protective gear, according to The Sacramento Bee.

On Wednesday, about 50 protesters took over the intersection near the Sacramento district attorney’s office as part of a protest organized by the local Black Lives Matter chapter to urge the district attorney to file charges against the officers who shot Clark. In New York City, hundreds of people marched to protest the shooting and at least 11 people were detained as tensions flared.

Meanwhile, Steinberg said disruptions like Stevante Clark’s at Tuesday’s council meeting won’t happen again. ‘But in that moment, that was a brother grieving for the loss of his brother,’ he said.

The California attorney general’s office on Tuesday joined the investigation, a move Sacramento Police Chief Daniel Hahn said he hopes will bring ‘faith and transparency’ to a case that he said has sparked ‘extremely high emotions, anger and hurt in our city.’