The number of City traders training their guns on South West Water owner Pennon has surged.

Short positions – contracts that allow investors to make money when a share price falls – taken against the FTSE250 utility rose in the past fortnight to the highest in more than five years.

The number peaked at 4.4 per cent of Pennon shares. But by the end of last week, 3.3 per cent were controlled by short traders.

Speculation: Short positions taken against South West Water owner Pennon rose in the past fortnight to the highest in more than five years

The firm will be hoping a trading update released on Friday – which said its first-half results would meet expectations – will calm the waters.

The lukewarm reception from the market (shares rose 2.5 per cent) suggests investors are content with how Pennon is grappling with challenges such as the driest weather in 100 years and population increases in the South West.

But there is speculation it may be hit by higher energy prices, rising interest rates on its debts and an industry clampdown to stop firms releasing sewage into rivers after it came under fire for dumping waste into waterways.

On the subject of shorts, there might be tears at Boohoo this weekend after the bets against the online retailer hit a new high of 10.4 per cent of shares.

It is quite a feat – if an unfortunate one – to reach double digits. It follows a slump in both sales and profits. 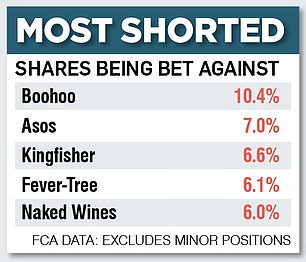 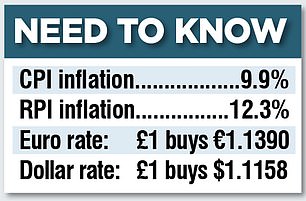 There was no surprise in the City when Vin Murria’s nine-month effort to buy M&C Saatchi flopped miserably on Friday.

Murria, who was trying to buy the advertising agency through her group – the oddly named Advanced­AdvT – secured too little support for her takeover.

With that done, M&C Saatchi investors can decide whether to support an offer from its other suitor, Next Fifteen Communications.

A vote is likely in November. But Next Fifteen’s lagging share price makes the deal (which involves cash and shares) unlikely to succeed, according to a source close to M&C Saatchi.

Next Fifteen supporters may have hoped the company’s results last week would help the cause – but shares have lost even more steam since then.

Marks & Spencer, Whitbread, Amigo and Informa are among those to have received a bloody nose from disgruntled shareholders over high executive pay this year.

The latest to join the cohort nursing wounds from an investor revolt is, well, Cohort, the AIM-listed defence and technology minnow that has contracts with the Ministry of Defence.

About 20 per cent of votes went against this year’s pay report, in which chief executive Andrew Thomis was handed £340,000.