A grandfather was killed as he hung Christmas decorations on a street in Maine after apparently being hit by his own truck.

William L. Thyng, 71, was working with another person in a bucket truck to put up decorations when was killed, the Lewiston Sun Journal reported.

‘It was apparent how much everyone thought of Bill as we grieved his loss while remembering him for the person he was,’ Buck said in a statement. ‘We all have Bill’s wife and family in our prayers.’

William L. Thyng, 71, (pictured), was killed as he hung Christmas decorations on a street in Maine after apparently being hit by his own truck

Emergency responders were called to Main St, in front of Springvale District Court, about 1.30 pm on Monday for a report of a man hit by a truck.

Thyng was found lying in the street and was pronounced dead at the scene a short time later by Fire Department personnel.

It is understood that Thyng had been operating the bucket truck immediately before his death.

It was unclear how he came to be struck by the vehicle he had been operating or how he had come in the way of it.

Buck said Thyng was first employed by Sanford in 2012 at the Oakdale Cemetery. He has worked at the Parks and Recreation Department as a seasonal worker.

Thyng is survived by his wife, Sandy, two children and two grandchildren. An obituary published online reads claimed he was devoted husband, son, father and was the quintessential family man.

‘There is no person he wouldn’t talk to and not many people in the community that he didn’t know. He was known for his outgoing personality and dependable work ethic. To know Bill was to love Bill. 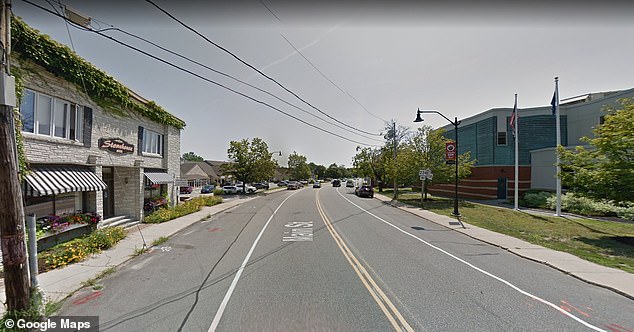 Emergency responders were called to the area of 447 Main St, in front of Springvale District Court, about 1.30 pm on Monday for a report of a man hit by a truck

‘He enjoyed traveling in recent years with his wife and friends to Vancouver, the Caribbean, and Alaska. However, there was no place in the world he enjoyed more than his family camp in Jackman, ME.

‘He was an avid hunter and fisherman who got so much joy just being outdoors. He was the biggest fan to not only his grandchildren at sporting events, but to all of their teammates throughout the years.

‘Bill was an active and integral part of his family’s lives and his presence will be terribly missed.

The bucket truck has been taken away by investigators with the State Police commercial vehicles unit.

The state Department of Labor responded to the scene to inspect the work site and will carry out an investigation.