By Luke Kenton for DailyMail.com

Civil rights icon John Lewis said protesters had filled him with hope in his final hours in a powerful essay he asked The New York Times to publish on the day of his funeral.

Lewis, who will be mourned and celebrated at Ebenezer Baptist Church in Atlanta later today, included the message as part of a powerful call to action he penned just two days before his death.

‘While my time here has now come to an end, I want you to know that in the last days and hours of my life you inspired me,’ Lewis opened.

‘You filled me with hope about the next chapter of the great American story when you used your power to make a difference in our society.

‘Though I may not be here with you, I urge you to answer the highest calling of your heart and stand up for what you truly believe. In my life I have done all I can to demonstrate that the way of peace, the way of love and nonviolence is the more excellent way,’ he added. ‘Now it is your turn to let freedom ring.’

In the piece, Lewis recounted his own fears over the 1955 lynching of Emmett Till and how his death steered him on path to the civil rights movement led by Martin Luther King.

In June, Lewis visited the newly named Black Lives Matter Plaza in Washington, DC, which he called ‘a powerful work of art’. He was hospitalized the next day

‘Emmett Till was my George Floyd. He was my Rayshard Brooks, Sandra Bland and Breonna Taylor,’ Lewis said. ‘He was 14 when he was killed, and I was only 15 years old at the time. I will never ever forget the moment when it became so clear that he could easily have been me.’

In June, Lewis visited the newly named Black Lives Matter Plaza in Washington, DC, which he called ‘a powerful work of art’.

He wrote in his essay that although he was admitted to the hospital a day after the visit, ‘I just had to see and feel it for myself that, after many years of silent witness, the truth is still marching on.’

Lewis, a prominent figure in the civil rights movement and a representative for an Atlanta-area district in the House for more than three decades, died on July 17 from pancreatic cancer. He was 80-years-old.

Born in Troy, Alabama, and the son of sharecroppers, Lewis began civil rights activism at a young age. He helped lead a march for voting rights on the Edmund Pettus Bridge in Selma, Alabama, on March 7, 1965, at age 25.

The day went on to become known as ‘Bloody Sunday’, after Lewis and numerous other marchers were brutally attacked by police, leaving him with a fractured skull.

Images from the march stunned the nation and helped galvanize support for the Voting Rights Act of 1965 that was signed into law by President Lyndon B. Johnson.

The icon revealed in his final essay how the lynching death of Emmett Till was the catalyst behind his life-long fight for equality and justice. 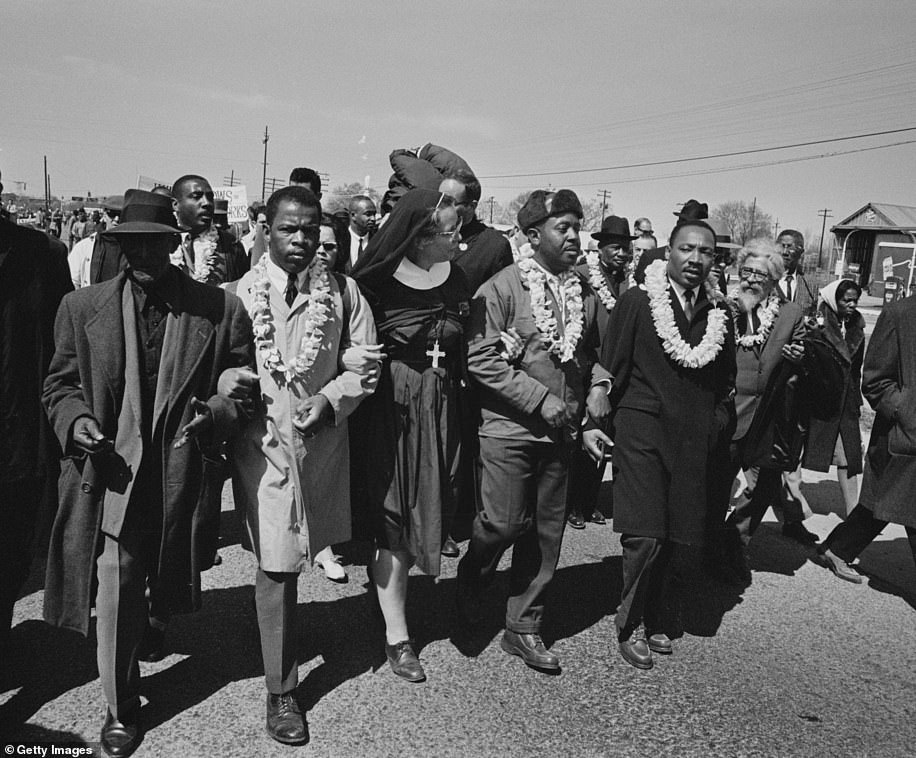 Born in Troy, Alabama, and the son of sharecroppers, Lewis (second from left) began civil rights activism at a young age. He helped lead a march for voting rights on the Edmund Pettus Bridge in Selma, Alabama, on March 7, 1965, at age 25 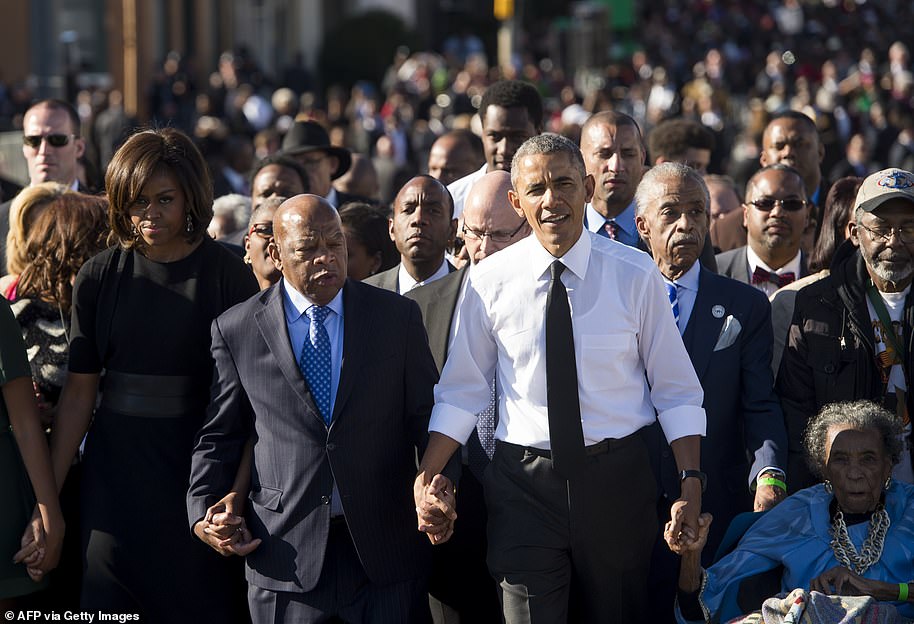 ‘He was 14 when he was killed, and I was only 15 years old at the time. I will never ever forget the moment when it became so clear that he could easily have been me,’ Lewis wrote.

He said he spent those days as a young black teenager constrained in ‘an imaginary prison’ of fear, with the lingering sense that brutality could be committed at any time ‘for now understandable reason’.

‘Though I was surrounded by two loving parents, plenty of brothers, sisters and cousins, their love could not protect me from the unholy oppression waiting just outside that family circle,’ Lewis wrote.

‘Unchecked, unrestrained violence and government-sanctioned terror had the power to turn a simple stroll to the store for some Skittles or an innocent morning jog down a lonesome country road into a nightmare.’

Lewis said he was searching for a way out – or a way in – when he heard the voice of Martin Luther King on the radio, which inspired him into activism.

‘He was talking about the philosophy and discipline of nonviolence. He said we are all complicit when we tolerate injustice,’ Lewis recounted.

‘When you see something that is not right, you must say something. You must do something. Democracy is not a state. It is an act, and each generation must do its part to help build what we called the Beloved Community, a nation and world society at peace with itself,’ he continued. 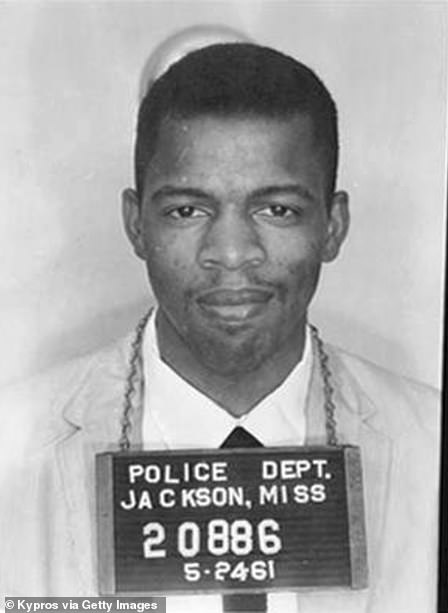 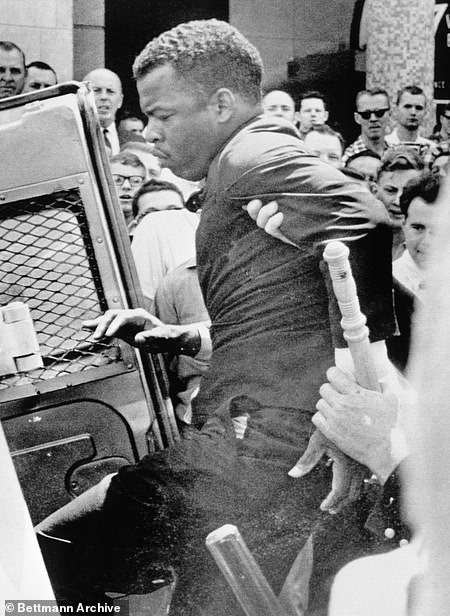 Lewis urged the next generation to continue getting into ‘good trouble, necessary trouble’ for ‘now it is your turn to let freedom ring’. He was arrested more than 40 times during various demonstrations

In order to survive as a ‘unified nation’, Lewis insisted that we must first discover what ‘so readily takes root in our hearts that could rob Mother Emanuel Church in South Carolina of her brightest and best, shoot unwitting concertgoers in Las Vegas and choke to death the hopes and dreams of a gifted violinist like Elijah McClain.’

Towards the end of his essay, Lewis called on the next generation of activists to carry on the mantle of civil rights and to continue the tradition of causing ‘good trouble’.

‘Ordinary people with extraordinary vision can redeem the soul of America by getting in what I call good trouble, necessary trouble,’ he wrote.

Lewis said that voting and participating in the democratic process are two of the easiest and most important ways of helped to enact substantial change, calling the right to vote the most ‘powerful nonviolent change agent’ you can have in a democracy.

‘When historians pick up their pens to write the story of the 21st century, let them say that it was your generation who laid down the heavy burdens of hate at last and that peace finally triumphed over violence, aggression and war,’ he urged.

‘So I say to you, walk with the wind, brothers and sisters, and let the spirit of peace and the power of everlasting love be your guide.’

Lewis’ essay was published by the Times just hours ahead of his funeral service, which will take place at the Ebenezer Baptist Church in Atlanta, Georgia, on Thursday.