A flat owner say it will be ‘at least six to seven years’ since first discovering dangerous cladding on her block before she can sell up.

It reflects the time many cladding-hit leaseholders have had to put their lives on hold for while they fight for their fire-trap homes to be made safe.

This is on top of the repair costs that some have had to pay, which can run into hundreds of thousands of pounds.

Natalie Carter, 44, (pictured) lives in a two-bedroom flat in Canary Wharf, which she bought for £650,000 in 2015 and is still unable to sell due to the cladding crisis 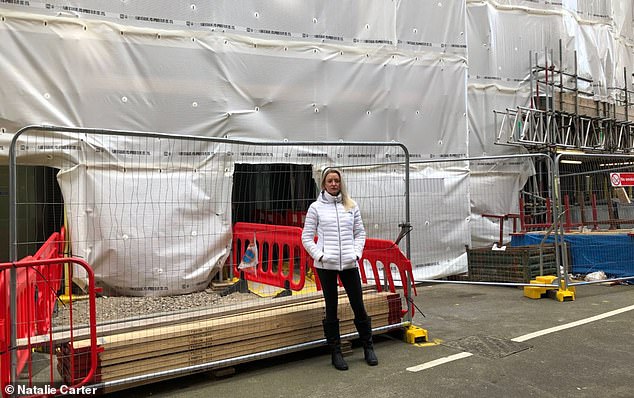 Natalie Carter is a cladding-hit flat owner, who has put her life on hold for at least six years while she waits for her fire-trap home to be made safe, so she can then sell it.

Her block has a total of 559 flats, which are now covered in scaffolding and Monarflex sheeting as remediation works to make them safe are carried out.

Like so many other flat owners affected by the cladding crisis, she is unable to sell until the building is safe, as lenders have been unwilling to lend on such properties due to the fire risk.

It follows the fire at Grenfell Tower in London in 2017 when 72 people died and a further 70 were injured.

Ms Carter explained that residents in her block had been told that it will be 38 weeks before the Monarflex and scaffolding would be removed. This is a 26 week delay.

‘By the time I realistically get our of here, it will be a minimum of six to seven years , maybe more, since discovering ACM cladding,’ she said.

She explained to MailOnline Property that the residents in her block found out about the dangerous cladding six months after the Grenfell fire.

It means that it will be five years since they found out about the dangerous cladding in June this year. 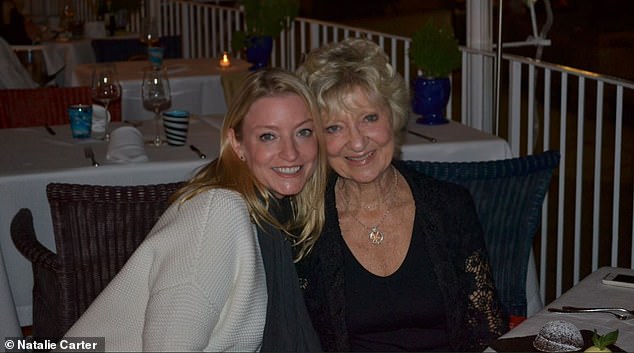 Natalie pictured with her mother, who she would like to move closer – but she is unable to sell the cladding-hit flat

The remediation work on the site will continue until the end of the year, assuming that the current timetable remains on track and there are no further delays.

She says there is an estimated six months of work on top of that to cover repairs to the roads and landscaping, which have been damaged during the remediation works.

That already brings the amount of time that she will have been dealing with the issue to six years.

She said: ‘There is no confirmation as yet when we will get the certification that allows us to sell, but I’m hoping that it will be soon.’

But she pointed out that the market will then be flooded with similar properties as many leaseholders want to sell up and get out of the properties as soon as they can.

She said: ‘A number of leaseholders are prepared to accept a loss of equity just to get out but I can’t afford to do that.’

Ms Carter, who is programme manager for a global broker in London says she is heavily mortgaged, while the service charge increasing 53 per cent in four years has made it unaffordable. But she is currently trapped and unable to sell.

She went on to say: ‘My mother is 76 and has some health concerns that mean I really need to move closer to her. But this horrific flat situation means I can’t do that.’

It comes as the Archbishop of Canterbury said on social media that he was ‘praying for those working to ensure safety and justice in our homes’.

He said: ‘As we approach the fifth anniversary of Grenfell, it’s deeply wrong that people are still financially, physically, and mentally trapped by dangerous cladding in our country.’

As we approach the fifth anniversary of Grenfell, it’s deeply wrong that people are still financially, physically, and mentally trapped by dangerous cladding in our country.

A privilege to meet @McrCladiators. Praying for those working to ensure safety and justice in our homes. pic.twitter.com/GD8ddFx9Ta

Campaigners have responded to a new report published this week about building safety remediation and funding.

The report was published by the Levelling Up, Housing and Communities Select Committee.

In a statement, the End Our Cladding Scandal Campaign stated: ‘We welcome this important report, and we thank members of the Select Committee for their dedication to ensure there is justice for all innocent victims of this crisis. We echo the strong words of chair Clive Betts – it truly is shameful that this situation is yet to be properly resolved.

‘We very much welcome the report’s recommendations, in particular: the repeated call for a Comprehensive Building Safety Fund that sets no arbitrary rules; the call to scrap the proposed cap on costs to fix non-cladding issues; an independent body such as the Building Safety Regulator to decide which buildings need to be assessed and remediated on a consistent basis and, importantly, compensation for the thousands of pounds many of us have already been forced to pay out.

‘The report also chastises the Government’s wilful exclusion of buy-to-let landlords with more than one property and of residents in buildings below 11m. It is also vital to cease the games being played with affordable housing budgets simply because the Chancellor is continuing to ignore our plight. Solving both the building safety and housing crises is, and always has been, a matter of political will and choice.

‘We acknowledge that the approach by Secretary of State Gove is better than his predecessor; however, too many ordinary people are still being deliberately ruled out of help and there are still too many gaps in the Government’s ‘piecemeal measures’.

‘In January, Michael Gove told Parliament that ‘leaseholders are sharing a desperately unfair burden. They are blameless, and it is morally wrong that they should be the ones asked to pay the price’. These are fine words, yet Mr Gove has still to back them up with real action. We now need him to amend the Building Safety Bill to provide true statutory protection from cladding and non-cladding costs to all leaseholders and make good the many mistakes of the past.

‘Mr Gove has a mandate from Boris Johnson to resolve this crisis and is engaged in a battle with the construction industry to make buildings safe. However, his early March deadline for a fully costed plan of action has already slipped – our lives remain in tatters while the Government plays pass the buck with the industry and the uncertainty in the housing market remains. Meanwhile, Rishi Sunak stubbornly refuses to provide any further help and yet the Grenfell Tower Inquiry continues to expose the role of politicians and the civil service in the Grenfell tragedy and their failure to maintain a regulatory system that is fit-for-purpose.

‘We ask that Mr Gove holds true to his promises and shows he has the will, authority, and nerve to free us from this nightmare.’

A DLUHC spokesperson said: ‘We have scrapped the flawed loan scheme and delivered the most radical and far-reaching legal protections ever for leaseholders on building safety.

‘Industry, not leaseholders, must pay to fix the problems they caused. We will consider the Committee’s report carefully and respond in detail.

‘However, asking taxpayers to pay more upfront instead of developers, and to covers costs for overseas property investors, would be entirely the wrong approach.’