She confidently expressed her views on the pay gap between herself and her co-star Matt Smith for their work on The Crown.

And Claire Foy, 34, power dressed at The Crown FYC event at the Saban Media Center at the Television Academy, in Los Angeles on Friday.

Ditched of her ballgowns, the actress accentuated her petite figure in her kooky ensemble by tucking the edges of her blue shirt into her bright red trousers.

Suits you Claire! Claire Foy ditched her royal ballgowns as she power dressed at Netflix event amid salary scandal on Friday in North Hollywood, California

Claire teased a glimpse of her buttermilk skin as she left the garment unbuttoned at the top, which gaped open to onlooking eyes.

Worlds away from her regal appearances on The Crown, the actress pulled off an altogether more modern look with her messy pixie hairdo.

The Netflix star crossed her legs, which ensured there was some attention on her open-toe Gucci sandals that added stature to her small height of 5″3′. 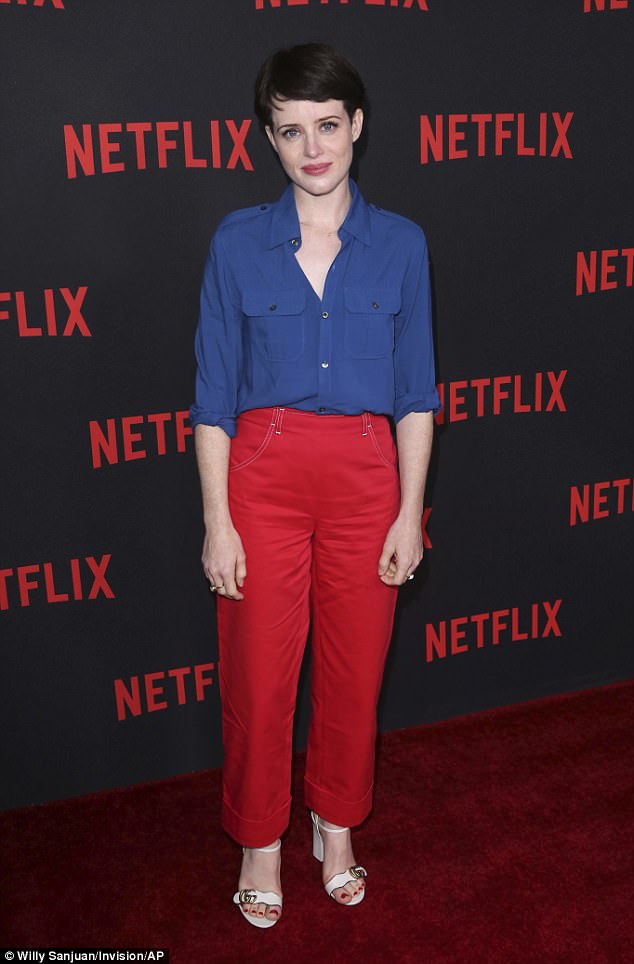 She’s got style: The 34-year-old actress accentuated her petite figure in her kooky ensemble by tucking the edges of her blue shirt into her bright red trousers

Cheeky: Claire teased a glimpse of some serious skin as she left the garment unbuttoned at the top, gaping open, while she spoke with an air of confidence

With a bottle of water to hand, the Wolf Hall star kept hydrated during her time talking on the stage about the Netflix series.

Regardless of the ’embarrassing’ pay gap between the leading actor and actress, Claire put on an animated display as she happily discussed the series. 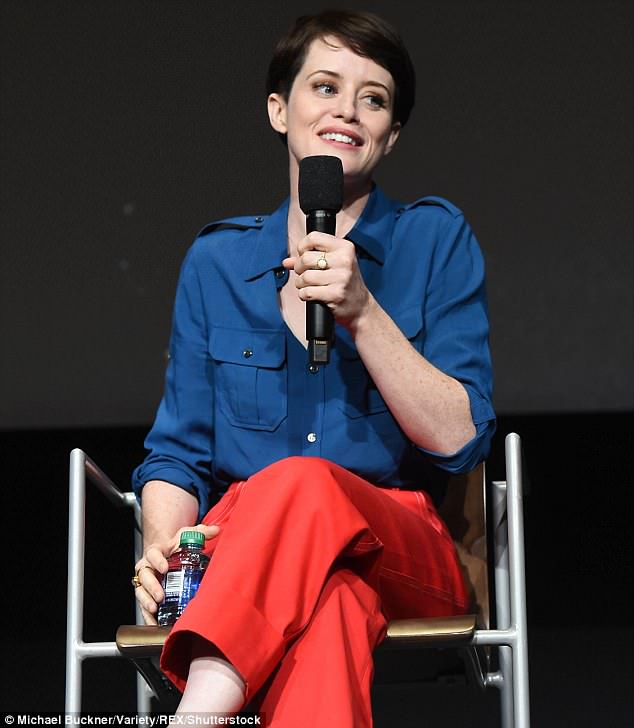 Claire’s appearance comes after she was left ’embarrassed’ upon learning that she was paid less than her co-star Matt Smith on two seasons of Netflix’s The Crown.

On the back of the gender pay gap outrage, Foy revealed that she has now had her ‘eyes opened’ and plans to do more to ensure there is no sexism in the industry.

At the CinemaCon 2018 Gala Opening Night Event on Monday, the British actress spoke candidly about what she had learnt from the scandal.

Giving it height: The Netflix star crossed her legs, which ensured there was some attention on her open-toe Gucci sandals that added stature to her small height of 5″3′

‘And I think that’s really changed my approach to myself and other women in this industry. It’s been only a positive thing — even though, embarrassing.’

Foy starred as Queen Elizabeth in Netflix series The Crown alongside Smith as Prince Philip for two seasons, with Olivia Colman and Tobias Menzies set to take over their roles this years as the series skips forward in time for season three. 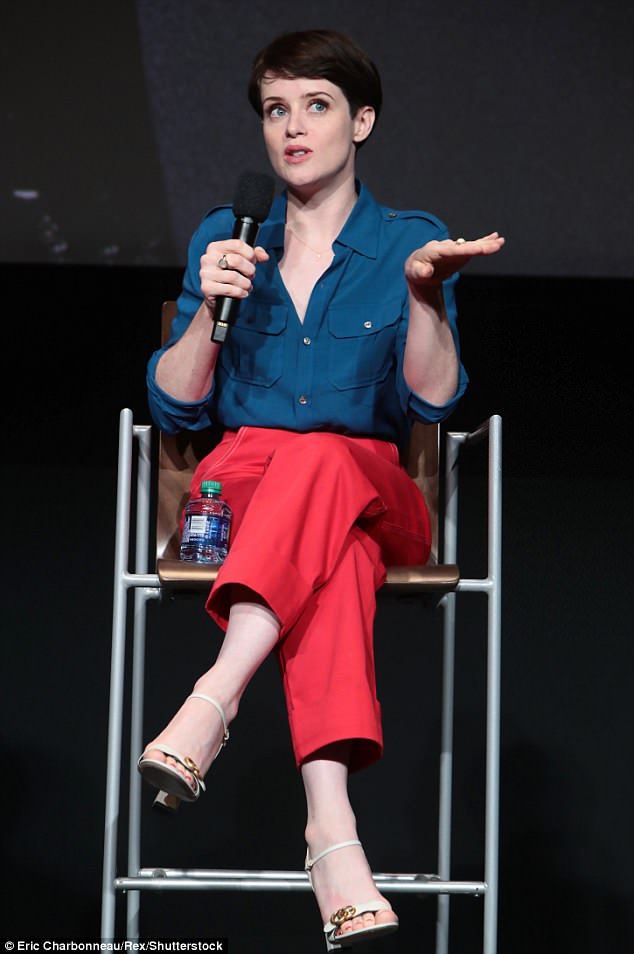 Putting it behind her: Regardless of the ’embarrassing’ pay gap between the leading actor and actress, Claire put on an animated display as she happily discussed the series

Producers of the show have now pledged that there will be no gender pay parity for the new cast.

Bosses claimed Smith was only paid more for the first seasons as he was a bigger name than Foy at the time of casting.

Smith weighed in on the debate as he revealed that the show’s producers have now ‘made amends’ for the gender pay gap. 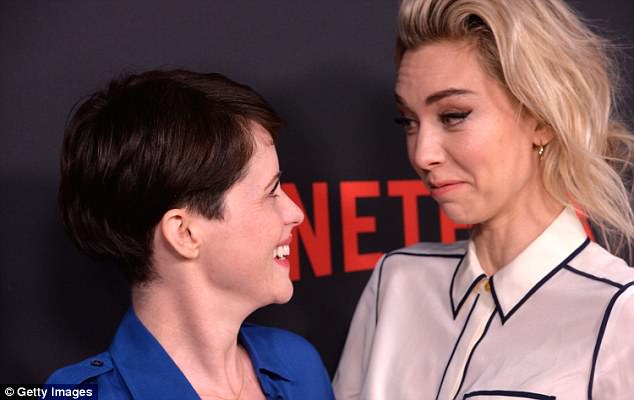 Good friends! Claire and Vanessa Kirby looked delighted to see each other, unable to contain their excitement over one another

‘Claire is one of my best friends, and I believe that we should be paid equally and fairly and there should be equality for all,’ Smith told The Hollywood Reporter .

The former Doctor Who star spoke to the publication at the Tribeca Film Festival in New York where he was attending the world premiere of his new film Mapplethorpe. 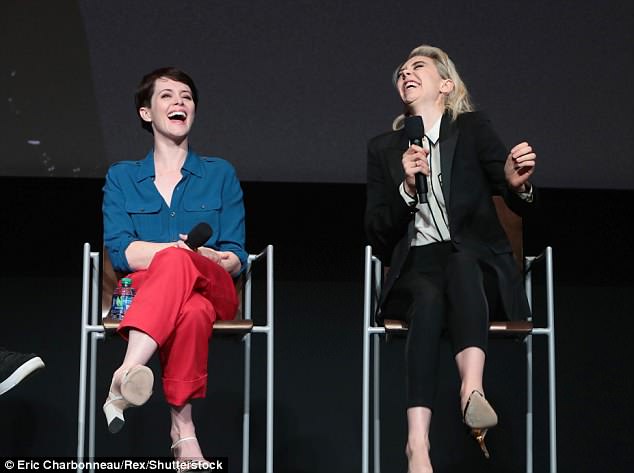 Good fun: Claire and Vanessa were having a great time as they giggled together like schoolgirls on stage

He didn’t clarify what he meant by saying that Netflix and Sony Pictures Television Studios had ‘made amends’ to Foy. 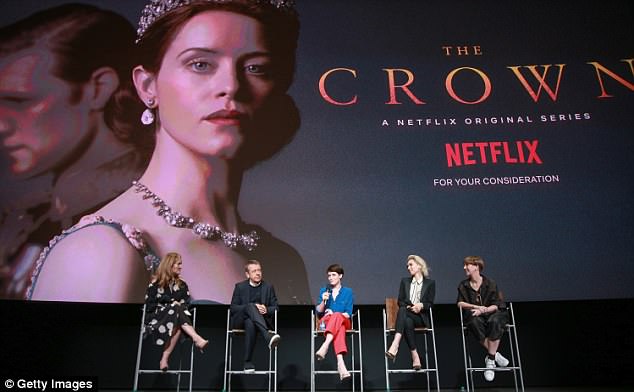