Honestly, you’d think Claire Foy might have worked harder to avoid being typecast. After glittering in Netflix series The Crown as Queen Elizabeth II — Lilibet to her nearest and dearest — here she is playing Her Majesty’s near-namesake, Lisbeth, in The Girl In The Spider’s Web.

Admittedly, this Lisbeth is a humourless, hard-knock, chain-smoking lesbian with a nose ring and a massive dragon tattoo on her back, from whom you wouldn’t want a tap on the shoulder with a ceremonial sword just in case she got the sudden urge to decapitate you and drop-kick your head into a wheelie-bin.

But still, another Lisbeth. How unimaginative. 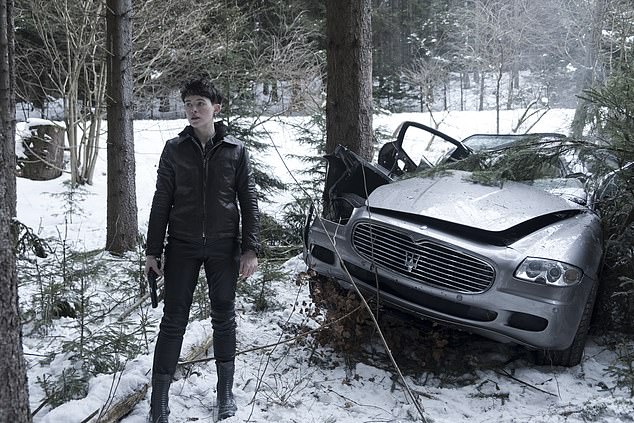 Hang-ups: Claire Foy with a wrecked car in The Girl In The Spider’s Web and (inset) stringing up a baddie

This one, Lisbeth Salander, is the avenging angel created by the late Stieg Larsson, although the film is based on the first of the so-called Millennium series of novels to be written after Larsson’s death, by David Lagercrantz.

In the previous movie adaptations, our fearsome heroine was played first by Noomi Rapace and then Rooney Mara. But Foy is the first British actress to take the role, and if ever there was a feature-length audition for a woman to be the next James Bond, this is it.

There’s even a fiendish and distinctly Bond-like plot to hack into the world’s nuclear defence systems, a cyber-attack which nobody but Salander can foil, albeit with the help of a prodigiously gifted child called August (Christopher Convery), whose boffin father, Frans, is played by Stephen Merchant.

It’s not entirely clear where Frans is meant to come from, incidentally, but it’s almost certainly not the suburbs of Bristol.

Yet Merchant’s rolling Bristolian vowels remain intact, while Foy treats us to a Swedish accent as heavy and unwieldy as a flat-pack Ikea wardrobe.

There she is in the foreground sounding like ABBA’s Anni-Frid, while a Swedish TV reporter in the background sounds like ITN’s Anna Ford. All I ask for is consistency.

Never mind. Whatever the loose state of her vowels, if Salander is to save the world she must first save herself, which she does by diving into a bath to escape an inferno.

She also eludes her pursuers by riding a motorbike across a frozen lake, dodges no end of machine-gun bullets and is more computer-savvy than everyone in Silicon Valley put together. She has a penchant for leggy blondes, too, making her more 007 than 007. 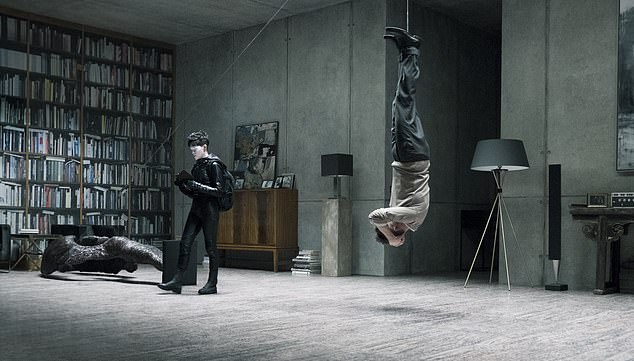 Or she would be, if she weren’t also a firebrand feminist on a mission to string up every abusive man by the you-know-whats, her anger stoked by memories of the paedophilic crimes committed on her and her sister by their own father. Knowing that, you’ll understand why a friend of mine described reading Larsson’s books as akin to being repeatedly battered over the head with a rolled-up copy of The Guardian.

Watching this film is less painful, since the action skips nimbly from set-piece to set-piece, Foy is terrific even with the dodgy accent and the dialogue is not as leaden as it might be.

One of the screenwriters, along with Jay Basu and director Fede Alvarez, is the estimable Steven Knight, who, long ago, in what must seem like another life entirely, was one of the creators of Who Wants To Be A Millionaire?.

Perhaps in homage to the show that made Knight rich, Salander gets to phone a friend, her journalist pal Mikael Blomkvist (Sverrir Gudnason). He’s the one person in Stockholm who knows what makes her tick.

As a thoroughly ludicrous but nevertheless pacy plot unfolds, it turns out there’s another person, even closer to home, who knows what makes her tick. But you’ll get no spoilers here.

Chance would be a fine thing. For the rest of the film, what we’ve seen before stands as a reproach to the nonsense we’re served up here.

Of course, there have been countless cinematic efforts (both before and since Michael Curtiz’s classic The Adventures Of Robin Hood) to tell the story of Sherwood Forest’s stalwart thief.

Some have been more than watchable. But quite why this one was made is anybody’s guess, especially as Nottingham appears to have been relocated to the Balkans. I don’t doubt that the East Midlands looked different in the Middle Ages, but I’ll wager four-and-twenty groats that there were no mountains. 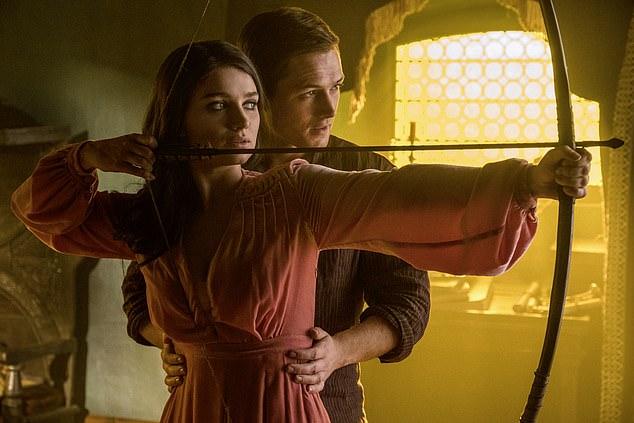 The story sees the outlawed aristocrat Robin (Taron Egerton) join forces with a Moor, played by Jamie Foxx (whose tricky Muslim name is anglicised to John), to foment rebellion against the evil Sheriff of Nottingham (Ben Mendelsohn).

There are duly lots of audacious heists, a disappointingly svelte Friar Tuck (Tim Minchin) and heartbreak for Robin as he returns from the Crusades to find that his beloved Marion (Eve Hewson), believing him to be dead, is now shacked up with another dishy rebel, called Will (Jamie Dornan).

Clumsy anachronisms abound, perhaps deliberately, though the film isn’t nearly witty enough to carry them off. Robin talks pure Estuary English while sporting a quilted anorak with a hoodie that wouldn’t look out of place in a Jack Wills window, and director Otto Bathurst tosses in a few Molotov cocktails, a millennium or so before Molotov.

So if you do yearn for a spot of robbing the rich to give to the poor this weekend, do yourself a favour, and sit down with Errol Flynn & Co. instead.

These starving shoplifters will steal your hearts and minds

This captivating Japanese film, both sad and uplifting, arrives in our cinemas (the comparative few that are showing it, anyway) with a great big feather in its cap: it was anointed with the prestigious Palme d’Or at this year’s Cannes Film festival.

Hirokazu Kore-eda’s film is set on the margins of society in Tokyo, where what appears to be a tight-knit family, headed by an elderly grandmother, subsists mainly on stolen food.

Every day, a middle-aged man and a boy of about ten go shoplifting, and we assume them to be father and son. But they aren’t even related. The man, Osamu (Lily Franky) has somehow recruited the boy, Shota (Kairi Jyo), as he then recruits an even younger girl, a tiny waif called Yuri (Miyu Sasaki, far left, with Kairi), setting her to work, too, in the shoplifting business. 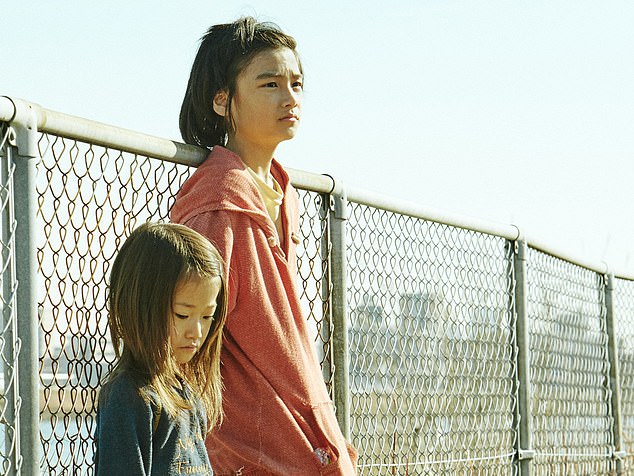 Hirokazu Kore-eda’s film is set on the margins of society in Tokyo, where what appears to be a tight-knit family, headed by an elderly grandmother, subsists mainly on stolen food

Osamu is a rogue, but he has a kind heart. The little girl was under-nourished and seemingly unwanted by her family. He took her in partly as an act of charity, but he can also see how useful she will be to his nefarious activities.

His common-law wife Noboyu (Sakura Ando) is similarly dishonest, stealing what she can at the laundry where she works.

But a seam of decency runs through her, too, and really this film is about the good and bad that co-exist in people, perhaps in all of us.

An age-old witch-hunt in a very modern world

The story of the Salem witch trials of the 17th century continues to resonate in the United States.

Arthur Miller used it as an allegory for McCarthyism in his famous 1953 play The Crucible, and now writer-director Sam Levinson has cleverly, if not very subtly, given the tale a 21st-century spin, using social media as the springboard for collective paranoia and fear.

Assassination Nation, despite its 18 certificate, is firmly aimed at younger audiences, who might enjoy its music video-style snap and punch.

It is based in the actual town of Salem, Massachusetts, where first the mayor, and then the high school principal, have their iPhones and internet browsing histories hacked. Public opprobrium follows, with tragic consequences. ‘Lock him up!’ chants a baying mob over and over, in an echo of Donald Trump’s presidential campaign.

The story unfolds from the perspective of four high school girls, one of whom, Lily (Odessa Young), also finds herself hacked and her affair with a married neighbour exposed.