The family car is expertly packed to the brim and the backseat is a wriggling hotbed of elbowing siblings.

Mum and Dad are in the front doing their best to keep a lid on things as you finally hit the highway and the holiday actually starts.

‘Does it have a pool, Dad?’ the familiar and all-important question is asked. The answer is in the affirmative. A cheer goes up as you pull into the motel.

A new book by comedian and radio and TV host Tim Ross explores the Australian experience of motels and road trips. This poolside picture taken at an unnamed 1970s Northern Territory motel in Alice Springs poses the question: Why is the man talking to a woman in a bikini wearing a jumper and jeans? Motels once represented a stylish and sophisticated way to travel 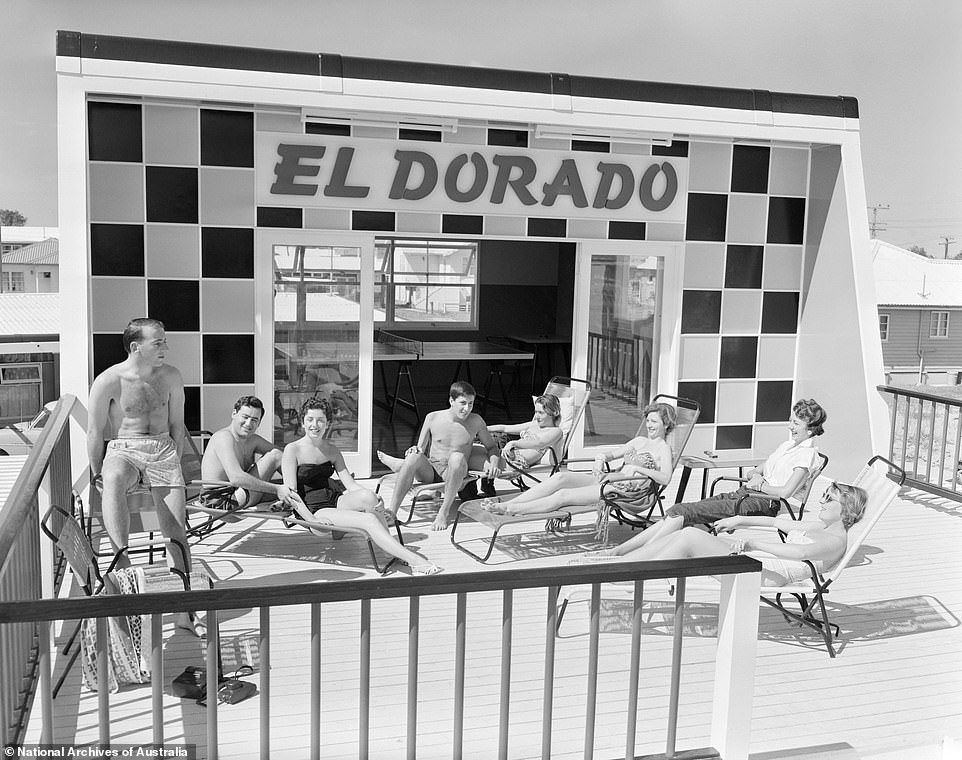 The El Dorado Motel was the first motel in Queensland’s Surfers Paradise where guests could drive up to their front door. It was inspired by motels in Florida and opened in 1954. Author Tim Ross has written ‘Motel – Images of Australia on Holidays’ 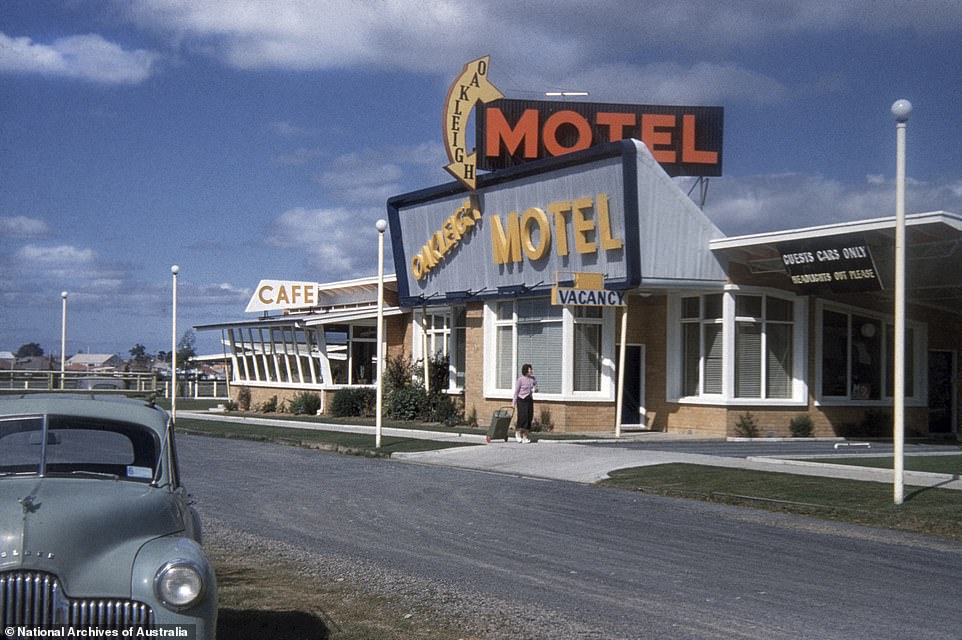 The Oakleigh Motel in Melbourne’s south-east was the city’s first motel. Designed to be built in time for the 1956 Olympics, it did not open until 1957. ‘How very Australian,’ Tim Ross writes in his new book. It was converted into townhouses in 2010

In a land where the car has provided us with the ultimate freedom to hit the road and explore, it is no surprise that Australians wholeheartedly embraced the American concept of the motel.

When they began springing up here in the 1950s, they represented a stylish and sophisticated way to travel.

In a country where travellers typically stayed in pubs with shared bathrooms, driving right up to the front door for a nightly sojourn in a room where your breakfast magically appeared through a hatch was an absolute revelation.

Family holidays form some of our most cherished memories and many of mine centre around classic Australian motels.

Some, it must be said, were better than others. The tray full of rubbery poached eggs, a tumbler full of pineapple juice with Glad-Wrap over the top, cold toast in a paper bag and variety packs of cereal were seldom seen on my family’s trips.

My Mum came prepared, with a stack of plastic bowls, a pack of Weet-Bix and a litre of milk put into the mini fridge. The only concession to the romance of motel travel was when we used the satchels of sugar that came with the room to pour over our Weet-Bix. 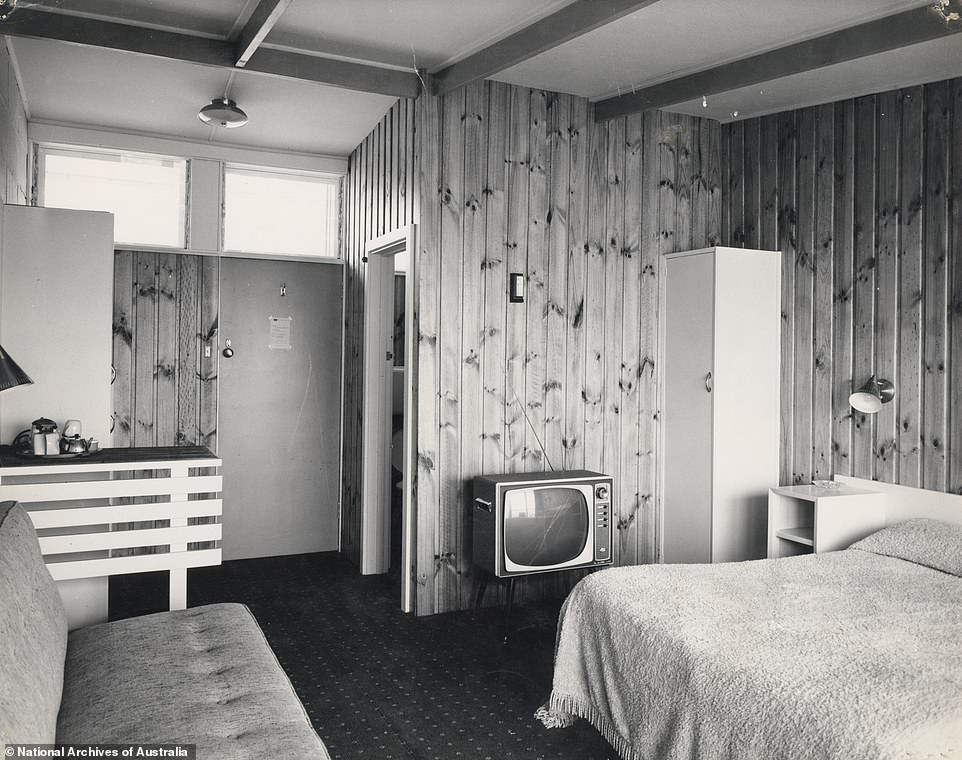 A room at the Riverfront motel in Hobart. ‘My brother checked the cupboard under the bench for the biscuits while I discovered two empty glasses in the fridge,’ Tim Ross writes of a childhood motel stay. ‘After a quick bounce on the bed my other brother stood on a chair to turn on the small Pye TV that sat on a lone shelf bolted on to a white, painted concrete wall’ 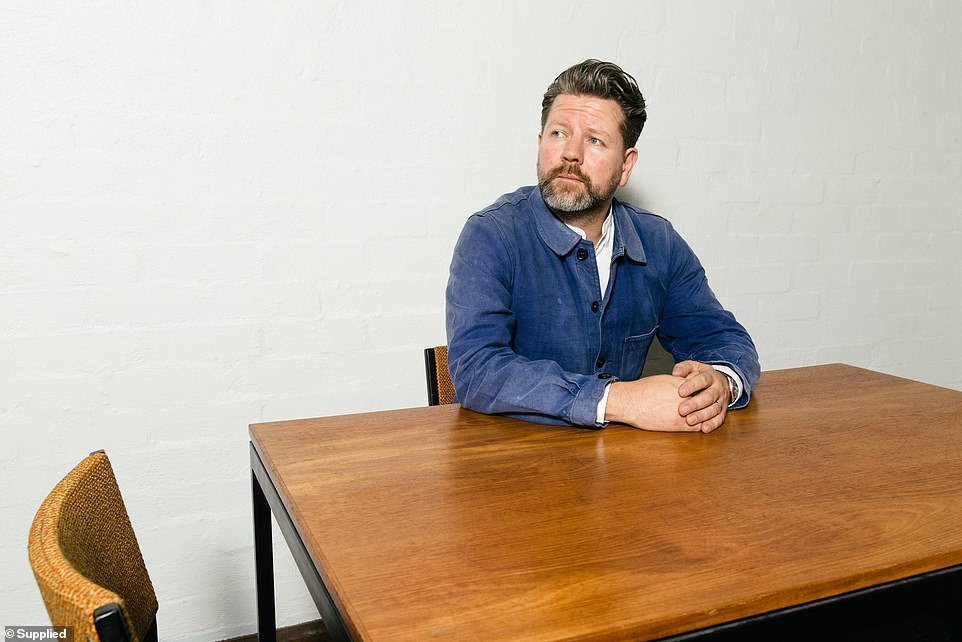 ‘In a land where the car has provided us with the ultimate freedom to hit the road and explore, it is no surprise that Australians wholeheartedly embraced the American concept of the motel,’ author Tim Ross (pictured) writes in his new book on motels

The lure of in-room colour TVs was huge for us in the late 1970s, given we were still stuck with a black-and-white number in the lounge room at home.

On one trip to country Victoria we stayed at a 1950s-looking motel that was built in the late 1960s. It was the middle of winter and the decorative swans fashioned from white tyres were struggling to be seen through the unmown grass of this establishment, ideally situated on the main road going into town.

After checking in, Dad drove the Kingswood up to the powder blue-coloured door. We poured out of the car and excitedly ran into the room, flinging open the door of the bathroom.

My brother checked the cupboard under the bench for the biscuits while I discovered two empty glasses in the fridge.

After a quick bounce on the bed my other brother stood on a chair to turn on the small Pye TV that sat on a lone shelf bolted on to a white, painted concrete wall.

At the sound of the click of the dial, our heads automatically tilted up so that our eyes were laser-focused on the screen, like ‘roos stuck in the headlights.

As the tube took an eternity to warm up, the sound faded in first and we listened to an indistinct ad for a farm product that is now undoubtedly on the banned chemical list. 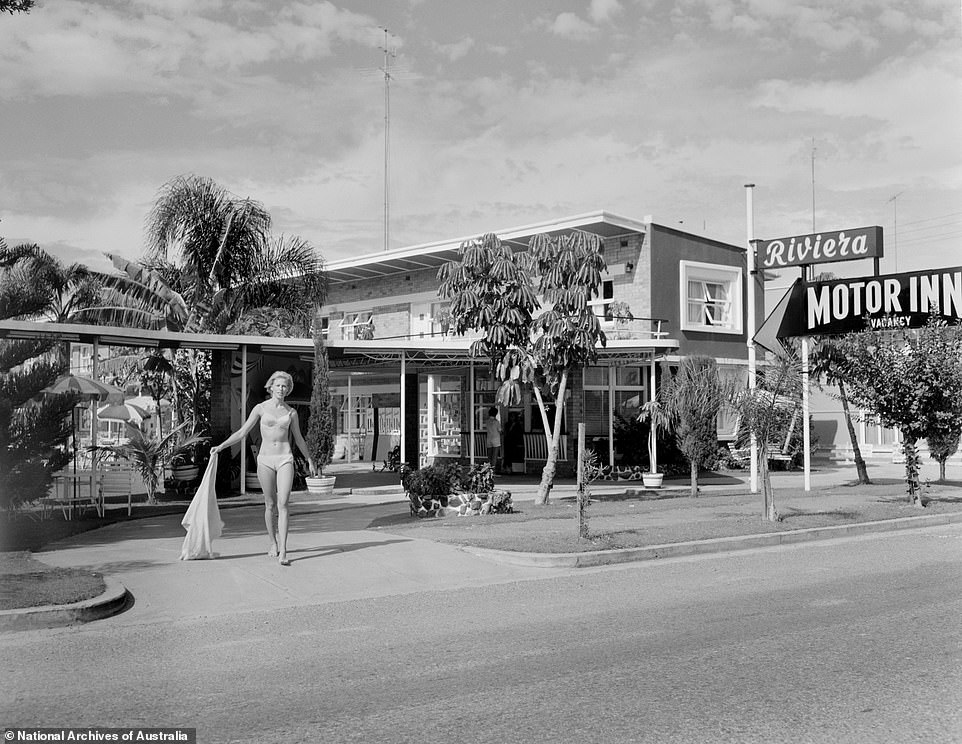 The Riviera Motel on Queensland’s Gold Coast was built about 1963. ‘A classic Gold Coast motel indicative of the tourism boom there in the 1960s,’ the author has captioned this picture. Not everyone was a fan of the new form of architecture

The white dot appeared on the screen and we waited in keen anticipation until – to our massive disappointment – the screen brightened to the greyish hue that was all too familiar to us. It wasn’t colour.

Deflated, that night we lay in bed and watched black-and-white Rumpole of the Bailey while eating Premium biscuits smeared with Meadow Lea and Vegemite.

When it was over we tried to fall asleep to the sounds of the trucks rumbling by outside, their bulk rattling the wafer-thin windows and their headlights sneaking through the top of the nylon curtain to dance across the motel room ceiling.

Most of the early motels in Australia weren’t designed by architects. The motel industry was full of cowboys and chancers, all racing to bring this new American style of accommodation to Australia.

Many were built by using photos from magazines and books as a guide and as a result, Australian motels from this era recall a rather over-the-top pastiche.

This is particularly evident with the El Dorado Motel on the Gold Coast, the first true motel in Surfers Paradise, built in 1954. 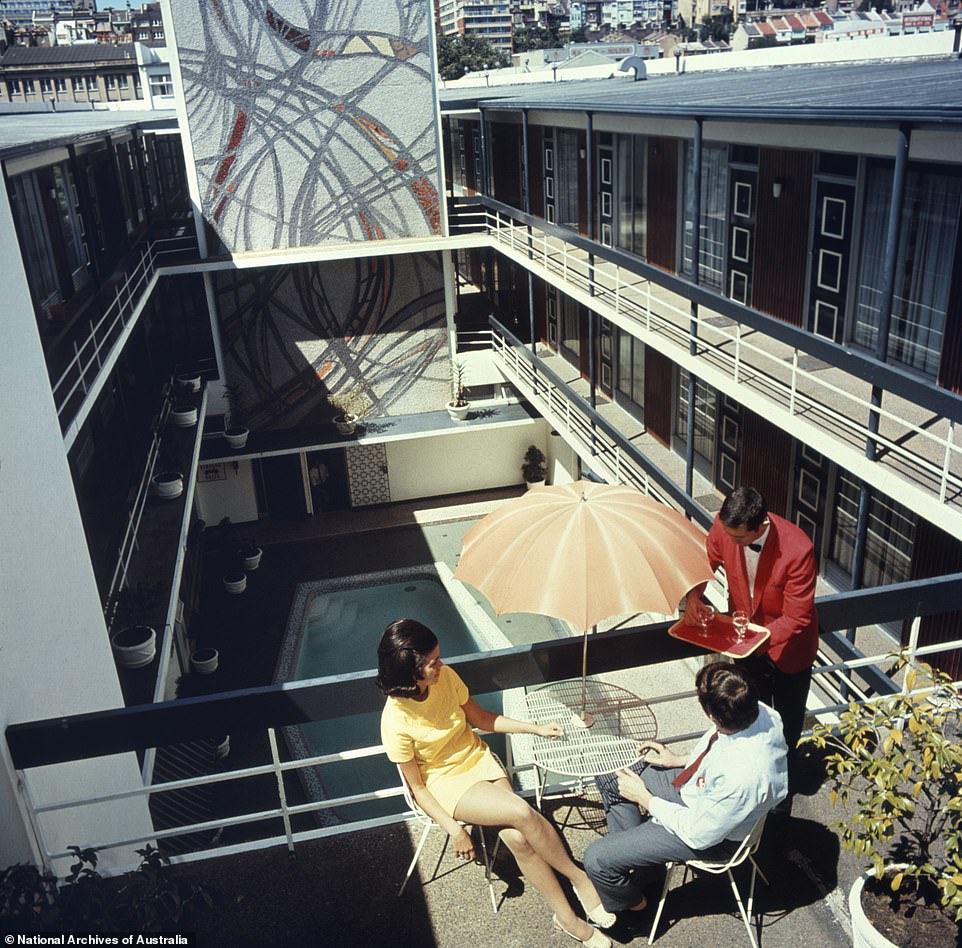 The Astor Motel at Woolloomooloo in Sydney’s inner-city with its coffin-shaped pool was built about 1964. The prominent mosaic artwork is long gone and the motel is now an apartment block. Motels began to spring up in Australia in the late 1950s 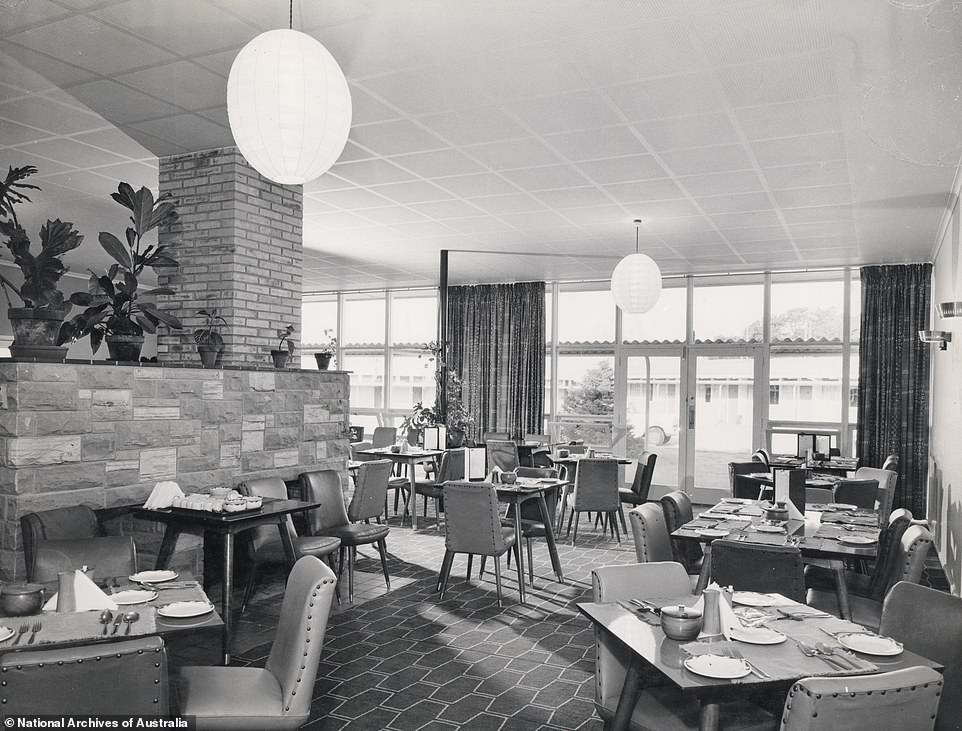 The restaurant in the Riverfront Motel in Hobart. ‘In a country where travelers typically stayed in pubs with shared bathrooms, driving right up to the front door for a nightly sojourn in a room where your breakfast magically appeared through a hatch was an absolute revelation,’ Motel author Tim Ross remembers. ‘Family holidays form some of our most cherished memories…’

When you look closely at the photos from the time you can see that the buildings seem out of proportion and the murals and feature walls give the impression that this is a wonky replica of something seen in the United States.

Not everyone was a fan of these Gold Coast motels. Architect and writer Robin Boyd described them as a ‘fibro cement paradise of plastic paint’ and teamed up with progressive developer David Yencken to create The Black Dolphin Motel on the NSW South Coast in 1958.

Boyd described it as an ‘architectural tranquiliser’ between Melbourne and Sydney, and his one-time partner Roy Grounds declared it his best work.

The rooms, which echoed the interiors of his domestic architecture, shielded the guests from noise by placing the bathroom at the front, facing the car park. A back door to the room opened up to the outdoors, a rarity then and still today.

This Australian-style motel bamboozled guests and the owners had to go to great lengths to explain that it was ‘architecturally’ significant. It is still standing today, though dramatically changed. 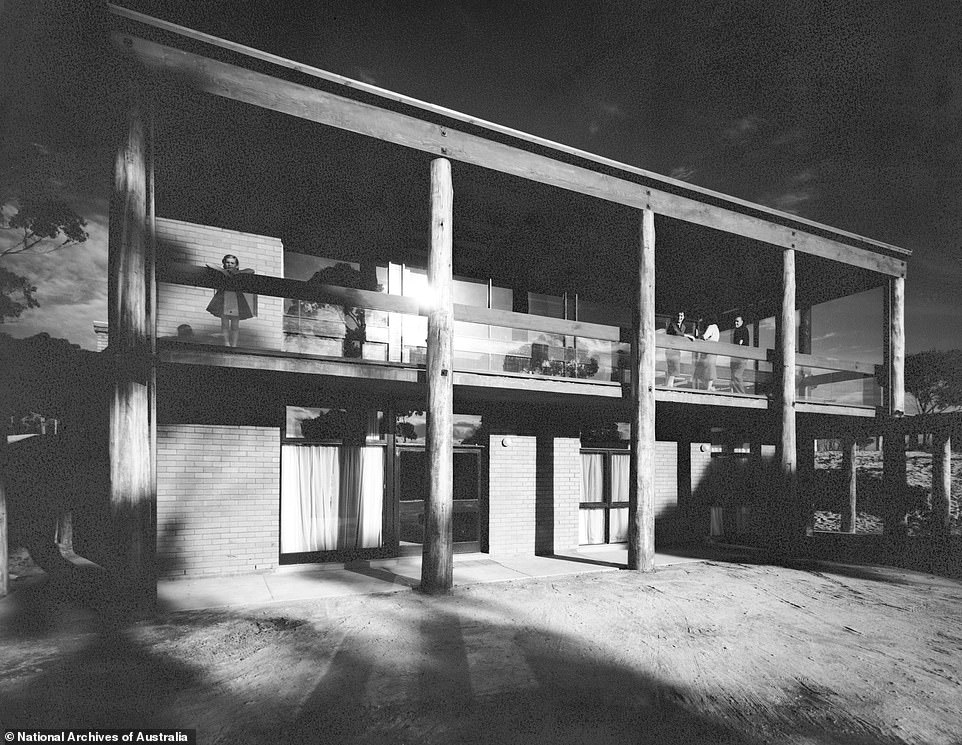 The Black Dolphin Motel at Merimbula on the south coast of NSW with its restrained signage, log columns and exposed bricks was designed by architect Robin Boyd as an antidote to American-style motels. It opened about 1958 and still survives today 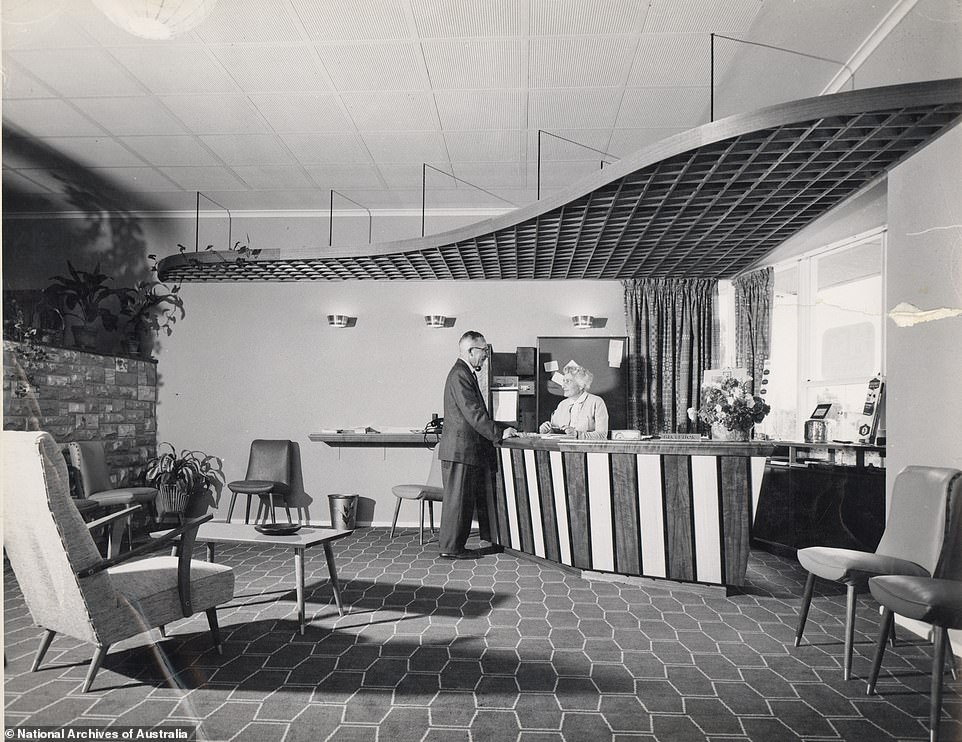 The original reception area at the Riverfront Motel at Rosetta in Hobart, near the Museum of New and Old Art. Author Tim Ross has described the Riverfront as a classic 1950s motel which provided some of the first such accommodation in the city

Overall our motels continued to reference American tastes until the 1970s, when they began to take design cues from our brick veneer homes.

Exposed brown brick was the new hero, perfect for scratching your face against if you were in the single bed positioned along the wall.

The illuminated red and blue Flag Inn signs seemed to match perfectly with the tiled, suburban-style roof of your evening’s accommodation.

The next trend to emerge at this time, and which carried through until well into the 1980s, was the embrace of anything ‘colonial’.

It was time to throw individual cakes of soap to the wind and instead, grab an old wagon wheel, paint it white, stick it out the front near reception and call yourself a part of ye olde Australia.

You’d still employ brick veneer… but with a flourish of iron lace work.

This was the golden age of Crown Lagers and apricot chicken, when the man or woman who handed you your room key also had a steady hand on the deep fryer as they brought your frozen crumbed prawns back to life.

Motel is also the title of Tim Ross’s latest live show, which he performs with musical partner Kit Warhurst. The show uses storytelling and song in a nostalgic exploration of Australian holidays.

To purchase the Motel book ($34.95), or to check dates and buy tickets (from $59) to the Motel show touring the country, go to Modernister Books.

The Town & Country Motel at South Strathfield in Sydney as it looks today. Tim Ross says occupancy is driven by road workers