Cleaners at a coronavirus-hit hospital walked off the job after their employer failed to pay them for almost a month.

The workers at University Hospital Lewisham, who earn £8.23 an hour, were due to be paid on February 27, but many discovered their wages were wrong with some not receiving any cash at all.

The hospital had switched outsourcing company to ISS UK who took over the contract at the start of February.

Cleaners earning £8.23 an hour at University Hospital Lewisham have seen their pay disrupted after they were transferred to an outsourced private company at the beginning of February 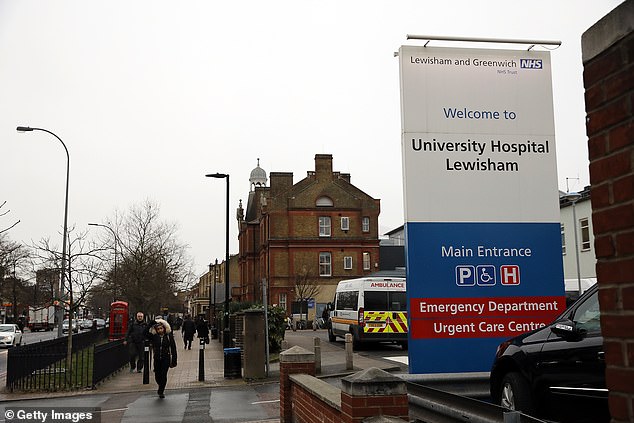 The staff are now with international service provider ISS who admitted problems after taking over the contract, however the firm said they aim to resolve the situation ‘swiftly’

Having received several assurances from management that their money would be paid in full, staff walked off the job on Thursday.

GMB Regional Organiser Helen O’Connor told MailOnline: ‘A company that last year made in excess of £39m profit can have no excuse to fail to pay the wages of NHS workers on time.

‘These cleaners are on the frontline of the battle against coronavirus. The company is not only driving these workers deeper into poverty, they are also taking risks with the health and wellbeing of hospital patients and the public.’

Ms O’Connor said some of the staff can no longer afford to travel by bus to work and are instead walking. Others are facing difficulties providing food for their families and paying rent.

She said she met with ISS management to try and resolve the situation, however she said the company suggested it could take a week to resolve the pay issue.

Ms O’Connor said the company should pay each of the affected staff £100 in compensation for the additional stress and trauma they have suffered.

Some 400 were involved in the transfer.

According to Ms O’Connor, cleaners at the hospital are incredibly angry that their pay has been interrupted. She said some of the staff work in excess of 60 hours a week because of the low level of pay.

Ms O’Connor said the company confirmed that no members of management have had their pay affected since the transfer took place.

Some staff members spoke with the South London Press anonymously as they were afraid that they might lose their jobs.

One housekeeping member of staff said: ‘It has been disgusting the way they treat us. We are working with coronavirus in the hospital and not getting paid for it.

‘If we don’t clean the ward it is a state and we have a chance of catching coronavirus here.’

Another worker said: ‘They short paid me on February 27. Today I received nothing at all. Zero.

‘I’ve never seen a payslip so I don’t know anything about how much they pay me, my pension, nothing. I need to pay rent today. I am so stressed the whole day. I can’t get the strength to work. We need to get money today.’

Ms O’Connor said the contract should be taken back in house to prevent further mistakes in future.

A spokesman for ISS told MailOnline: ‘ISS has recently transferred a large number of employees on to their payroll at the University Hospital Lewisham. This has involved moving to a different pay cycle and process for employees transferring to ISS.

‘We are very sorry that some employees have not been paid correctly and we have been taking urgent action to resolve any issues. We have arranged drop-in sessions and 1:1s to meet employees who have had an issue and to ensure that they are paid in full.

‘We are committed to ensuring a smooth mobilisation and encourage any employees with queries to contact us directly so that we can answer any questions and rectify any issues as swiftly as possible.’