New York City sanitation workers got to work on Thursday cleaning up a section of Midtown Manhattan that has been taken over by apparent drug users, who have been observed shooting up substances in broad daylight.

A sanitation staffer was photographed by DailyMail.com performing the unenviable task of collecting used syringes from around the pedestrian plaza at the corner of Broadway and West 40th Street.

The worker wearing a heavy-duty respirator and gloves was seen using a grabbing device to pick up needles from a large planter and depositing it into a special red blade disposal container.

Other disturbing photos showed a man sprawled out on the sidewalk and grimacing in apparent pain, with what looked like pill bottles or vials resting next to him.

Unenviable tasks: A sanitation worker is seen on Thursday picking up a syringe at the pedestrian plaza at Broadway at West 40th Street in Manhattan 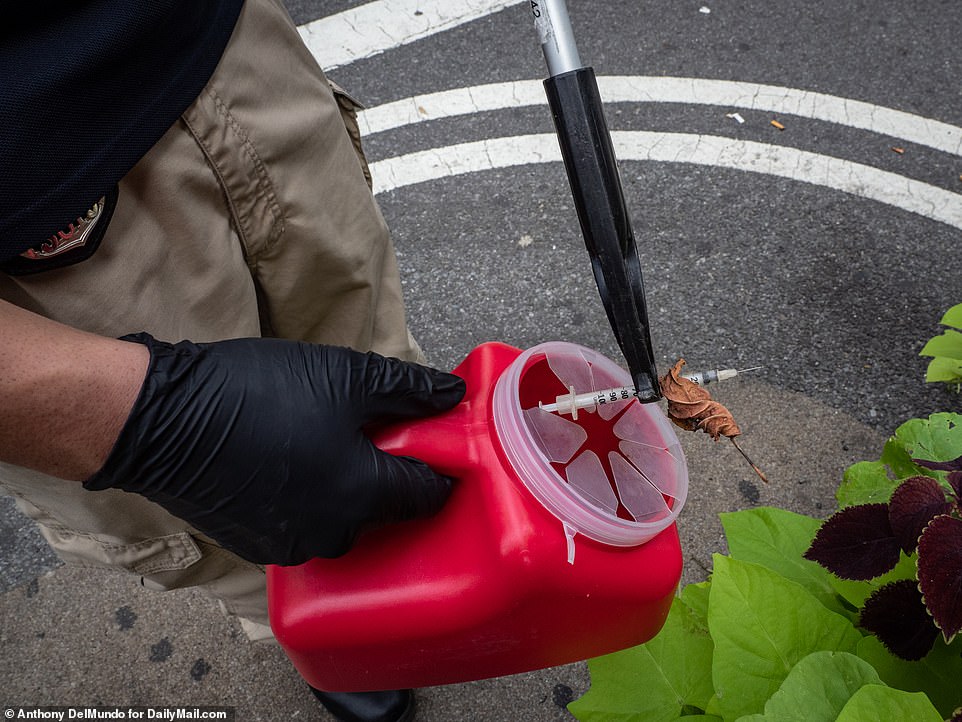 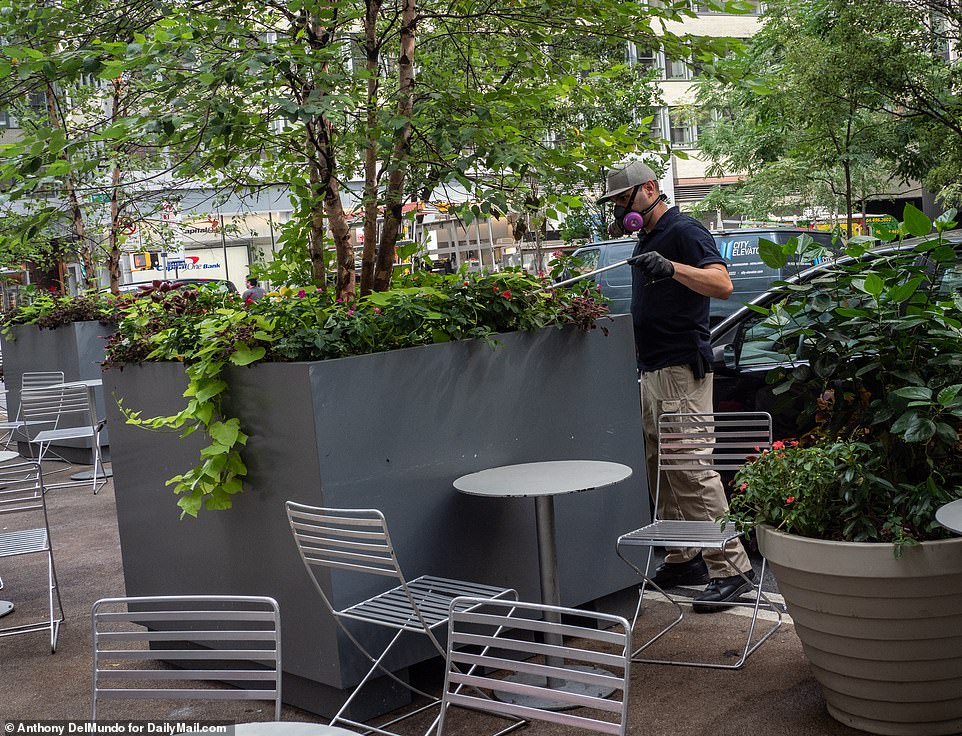 This section of Midtown Manhattan has been overtaken by apparent drug users, who have been observed shooting up substances in broad daylight 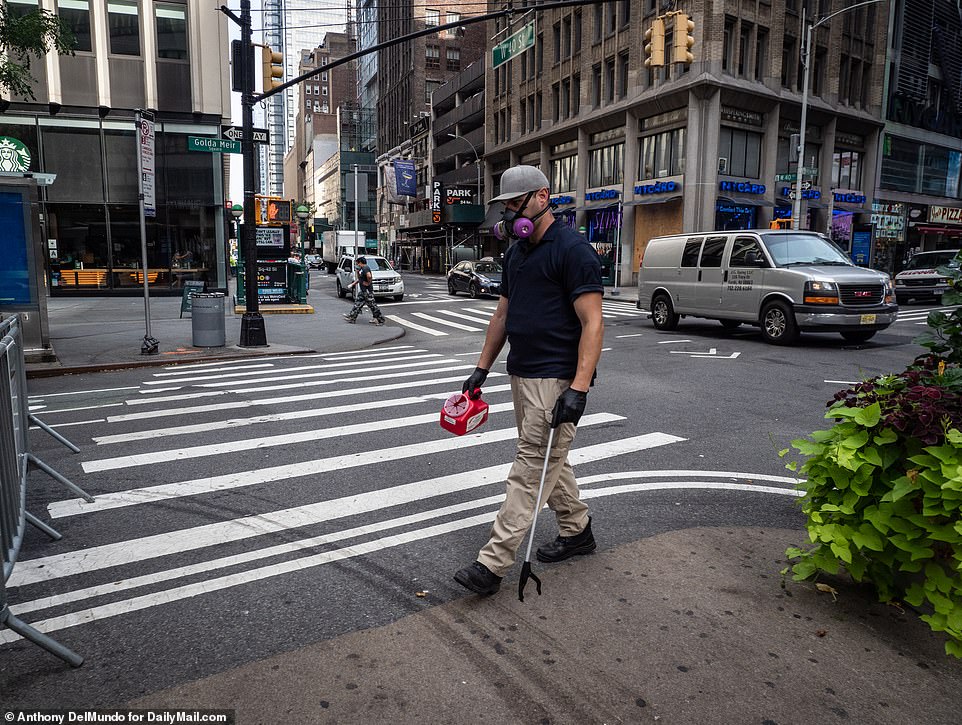 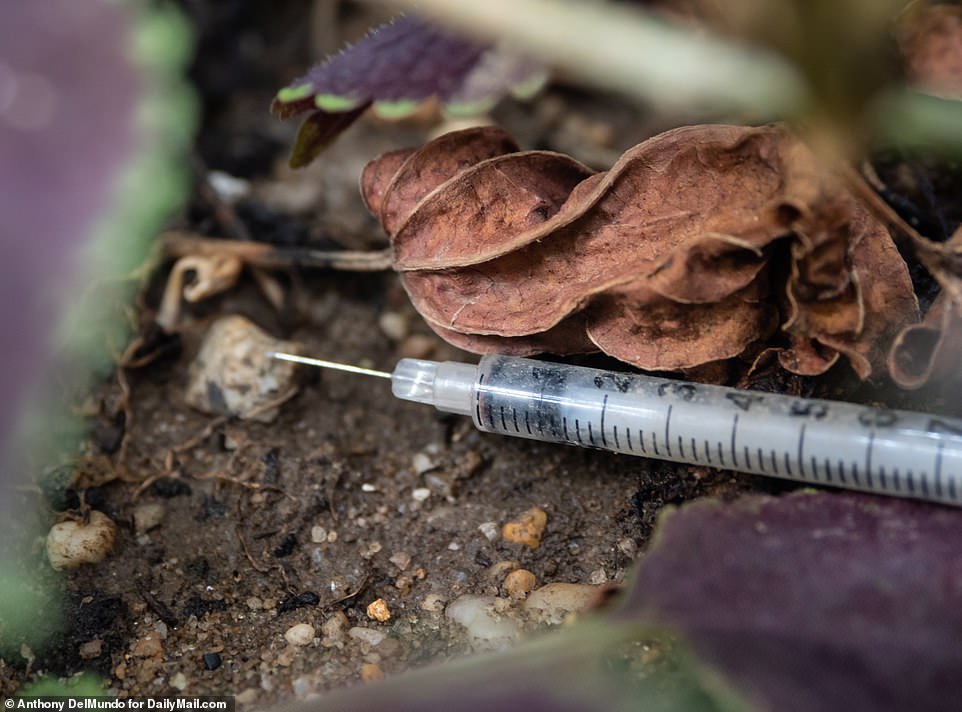 A closeup view of a syringe filled with an unknown substance, which was found inside a planter at the pedestrian plaza once popular among tourists and office workers 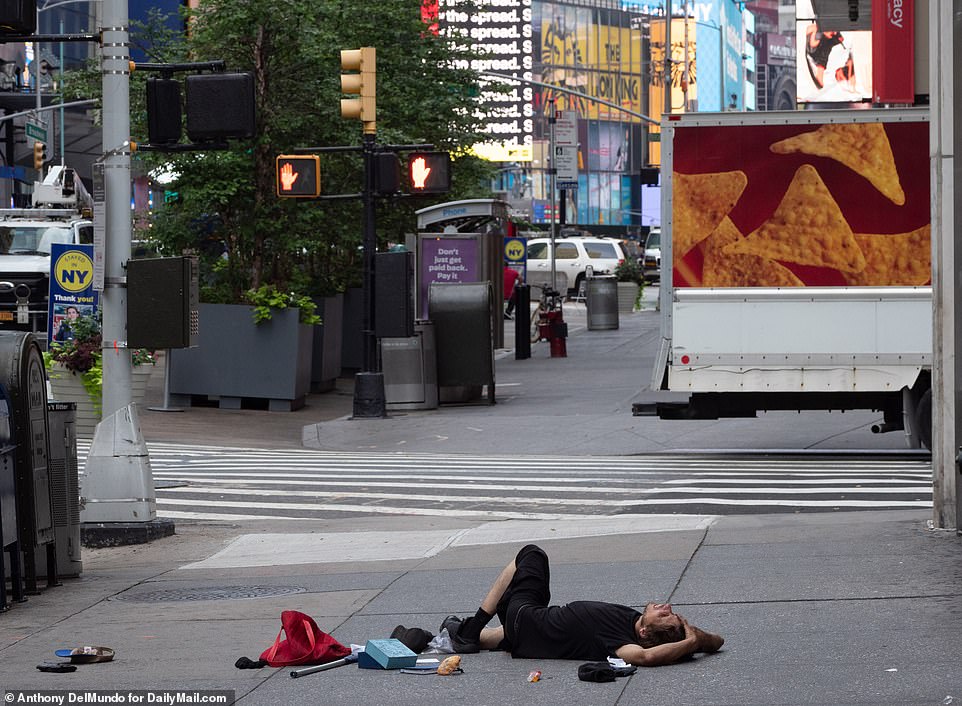 A man is seen sprawled in the middle of the sidewalk in Midtown Manhattan, with bill bottles or vials resting next to him 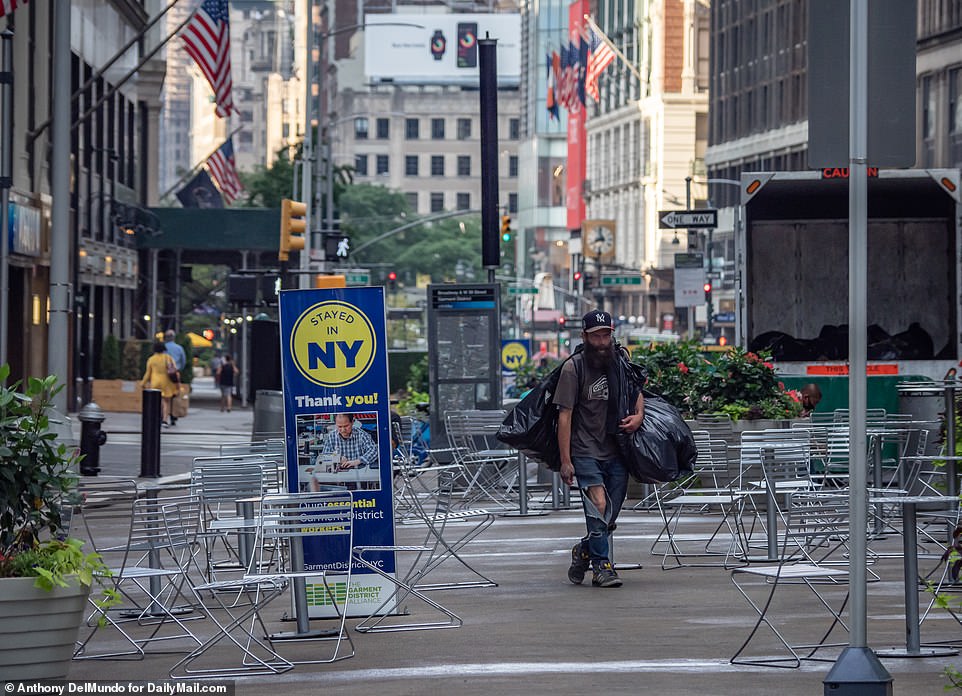 A man who appears to be homeless is seen walking through the deserted sitting area, carrying hefty black garbage bags

Since the start of the coronavirus pandemic, the once bustling area at the heart of Manhattan has emptied of office workers rushing to and from meetings, or pausing to enjoy a quick lunch al fresco-style at the plaza dotted with small metal tables and chairs.

Instead, the suit-and-tie crowd has been replaced with people down on their luck, many of them struggling with drug addiction, who have come to call that stretch of Broadway ‘home.’

Distressing photos taken by DailyMail.com at the pedestrian plaza on Wednesday captured a disheveled woman injecting herself with a needle in broad daylight, and then settling down for a nap on a public bench.

Local business owners and residents have been up in arms about their neighborhood’s rapid transformation into an open-air drug den, reminiscent of the 1970s and 80s, when rampant crime and crumbling infrastructure earned New York the moniker ‘Fear City.’

Officials at City Hall have acknowledged the unsettling situation and branded it ‘entirely unacceptable’, but locals say it’s only getting worse as nothing is being done to address it. 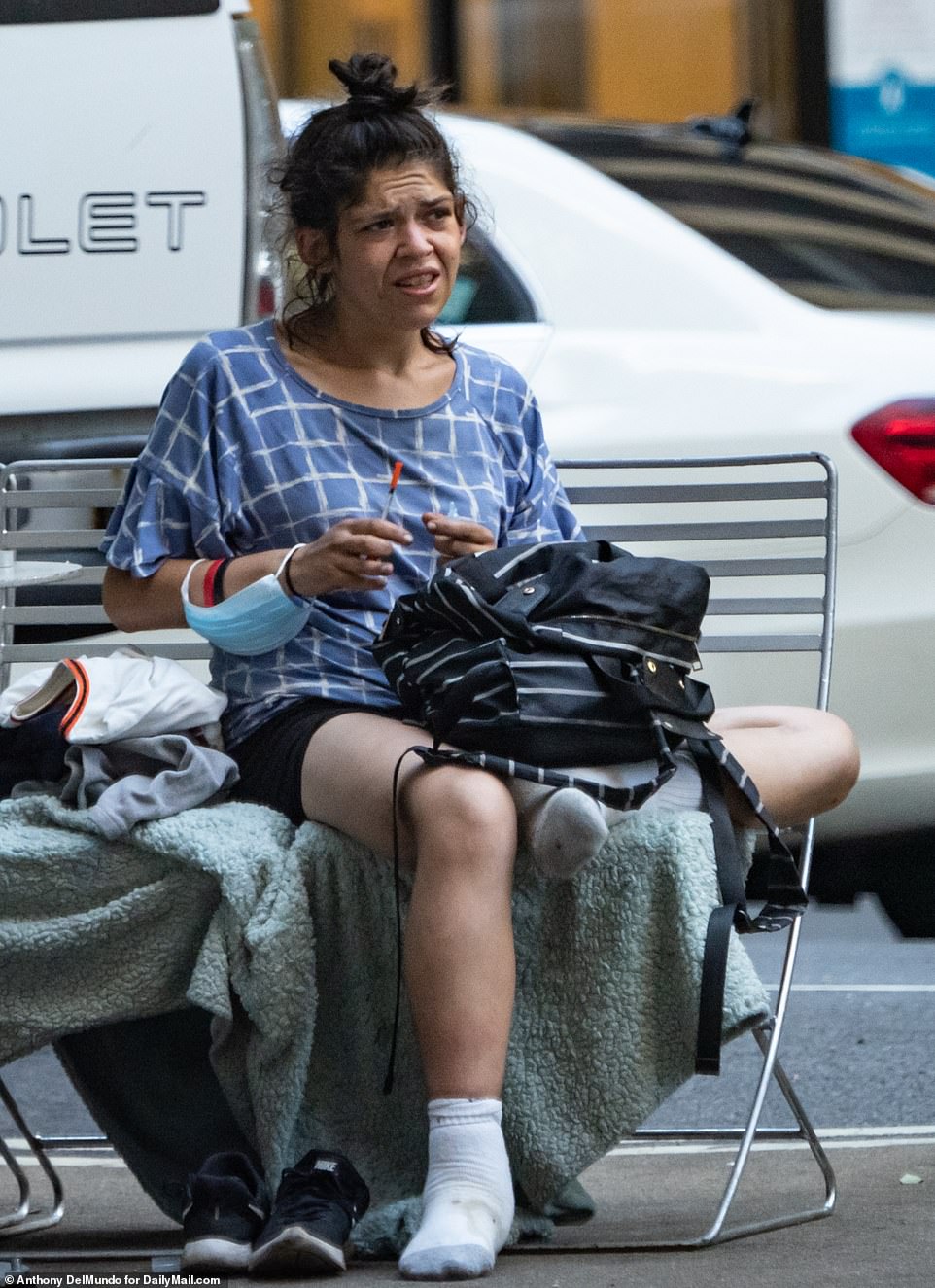 A woman was seen injecting herself with a needle in broad daylight at the intersection of Broadway and West 40th Street in Midtown on Wednesday. The images emerged as locals complain that the area has turned into a ‘shooting gallery’ for addicts 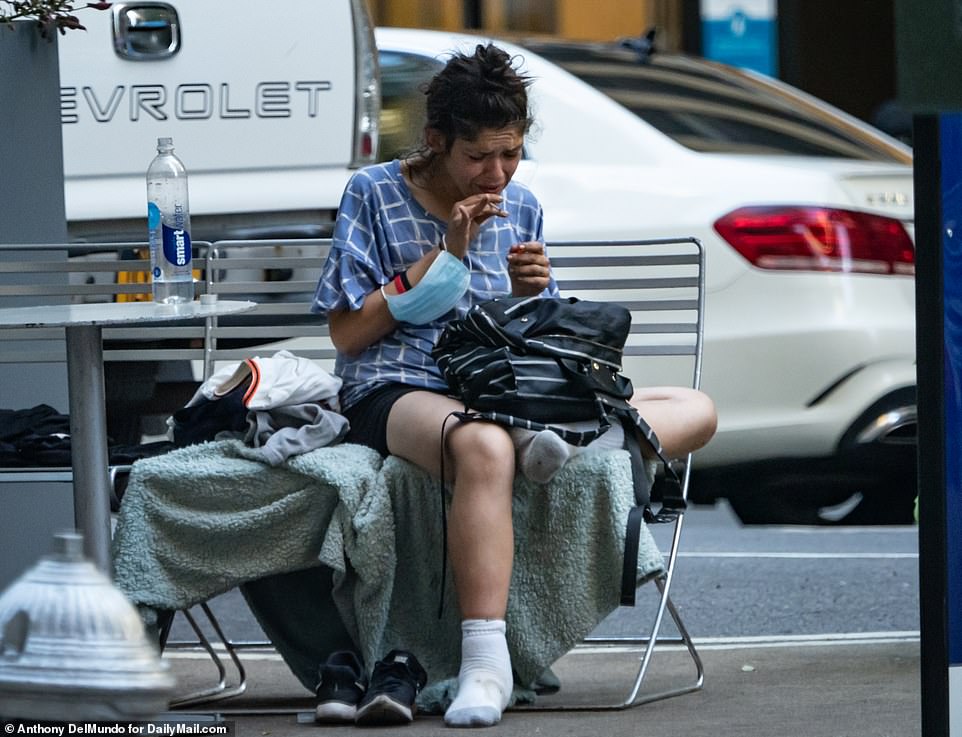 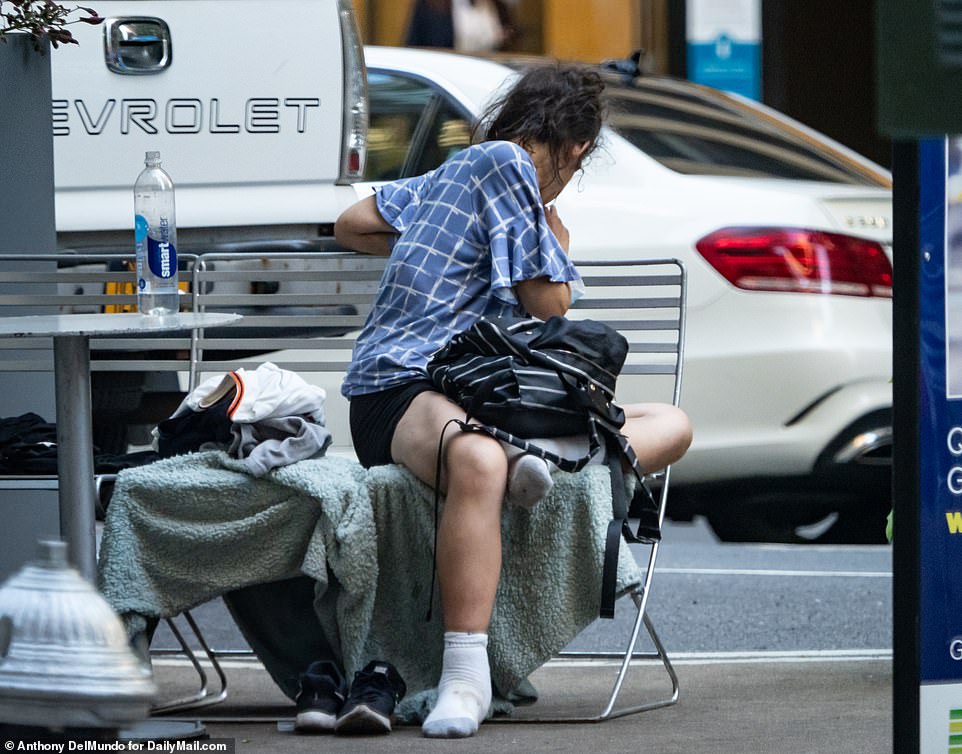 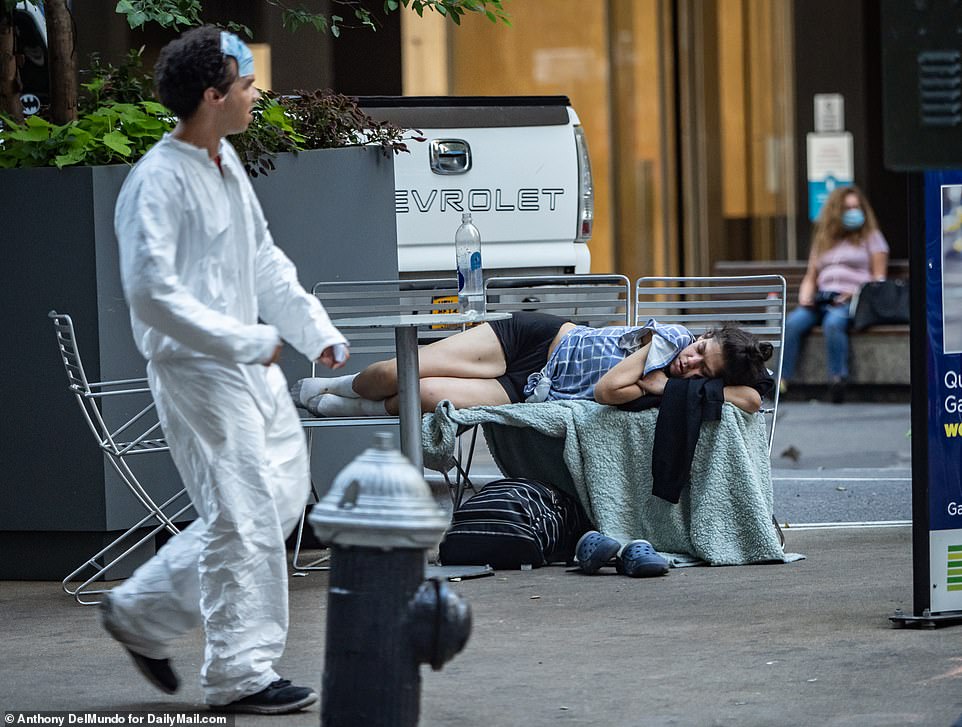 The New York Post first raised alarm about the burgeoning ‘shooting gallery’ on Tuesday and published a photo of the same woman wearing the same clothes as she pierced her arm with a needle.

While it cannot be said for certain whether the woman was using drugs, locals said it wasn’t an uncommon sight in the plaza.

‘They’ve taken over the tables, blatantly using needles and shooting up heroin all day long,’ a local worker named James told the Post.

‘There’s no police action, there’s no reach-out. There’s nobody preventing this, and you know we’ve had multiple calls to 311 but nobody really responds. It’s becoming a real problem.’

The lack of law enforcement attention was highlighted in another photo obtained by the outlet which showed an NYPD officer walking by the alleged junkie without batting an eye.

A third image showed four people huddled around a table with drug paraphernalia in clear view.

The NYPD told the Post that they’ve only received one drug complaint in the area in the past month, and that the suspects were gone when officers arrived.

James said that he’s personally contacted the city’s 311 line, but he referred to those calls as ‘futile exercises’. 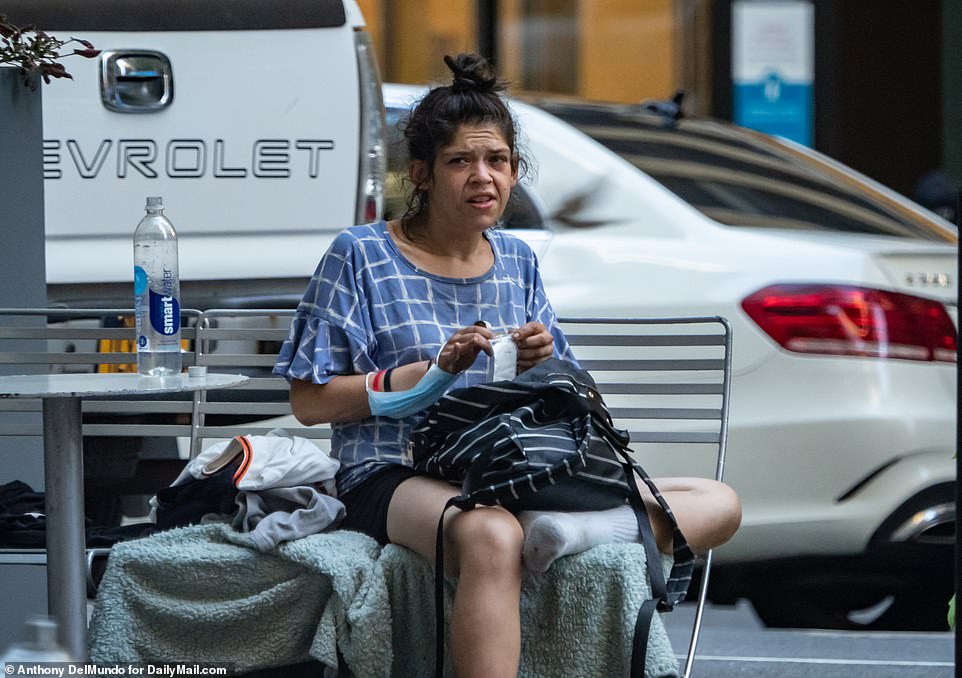 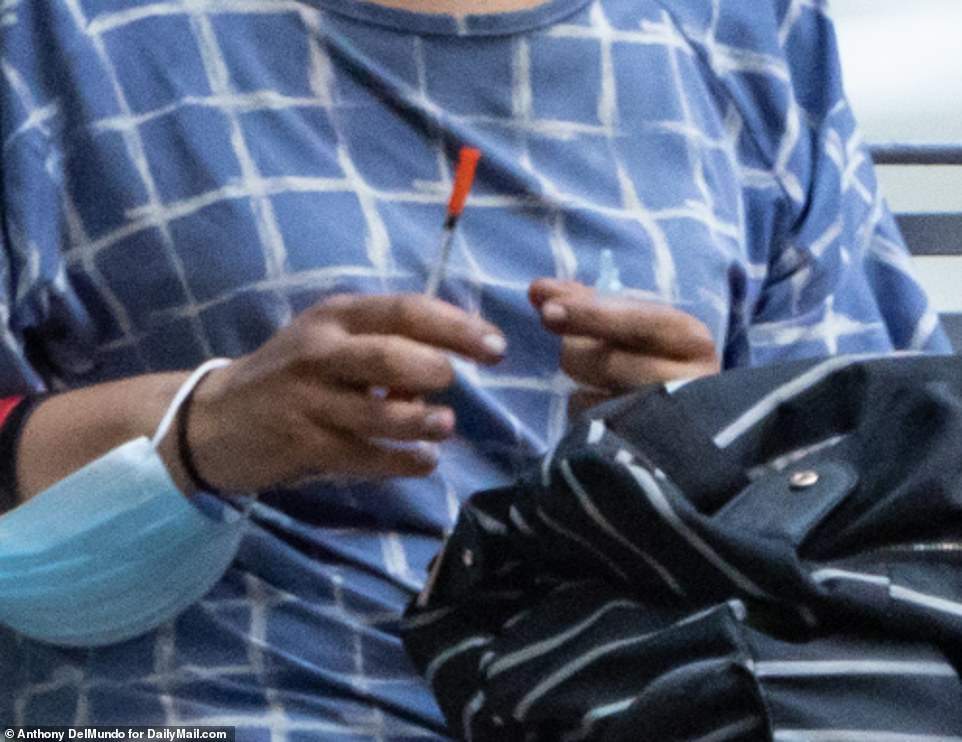 While it cannot be said for certain whether the woman was using drugs, locals said it wasn’t an uncommon sight in the plaza 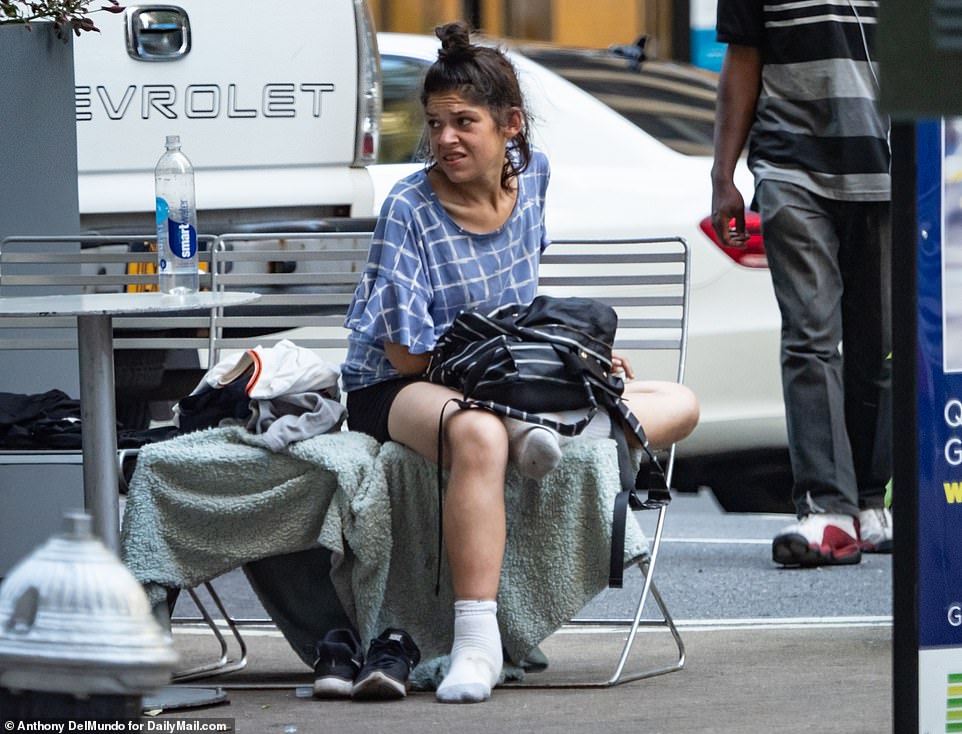 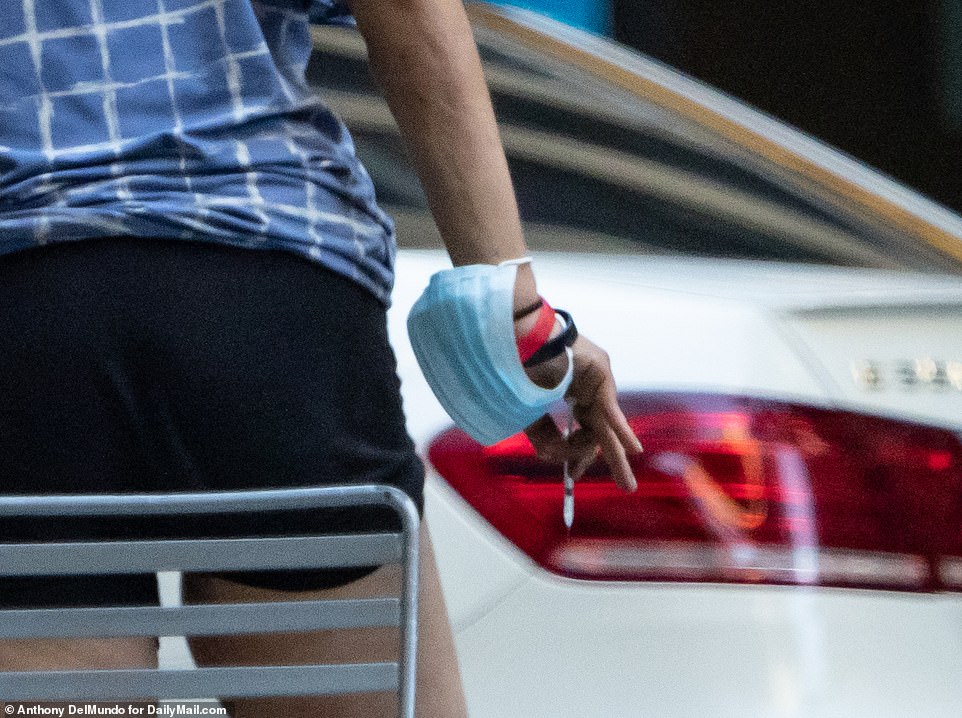 After appearing to inject herself she was seen walking away with the used needle in her hand. Locals have complained that the plaza is littered with improperly discarded syringes

Construction worker Edgar Rivera, who’s been working near the intersection for the past few weeks, said he’s come to recognize many of the addicts.

‘They are here every day, they start in the early morning. We see them sleeping on the floor.

‘Sometimes the ambulances come around here to help them out. It’s always the same guys.’

Another man named Jeff who has worked for a private sanitation company in the area for about six years confirmed that the situation has worsened in the last year.

‘It’s gotten really bad,’ he said. ‘I’ve been seeing more syringes, discarded syringes, ever since they started coming in.’

They’ve taken over the tables, blatantly using needles and shooting up heroin all day long. There’s no police action, there’s no reach-out. There’s nobody preventing this.

A spokeswoman for City Hall called the situation ‘entirely unacceptable’ when approached by the Post on Tuesday.

‘We will do everything we can to connect these people with drug treatment and help so they can get their lives back on track,’ the spokeswoman said.

She said plans were in place to send outreach workers with the city health department to clean up the area by providing syringe disposal kits, naloxone to reverse overdoses and connecting addicts with treatment services.

DailyMail.com has reached out to City Hall for clarification about when those outreach workers will be deployed.

Locals, meanwhile, don’t sound very optimistic about how effective the outreach will be.

The Post spoke to a security officer with the Garment District Alliance on Wednesday who said: ‘There have been outreach programs out here, but most of the time they don’t accept the help.’

That officer, who was helping power wash the pavement in the plaza at the time, said he’s worked in the area for seven years.

DailyMail.com has also reached out to the city health department for comment about the purported outreach plans. 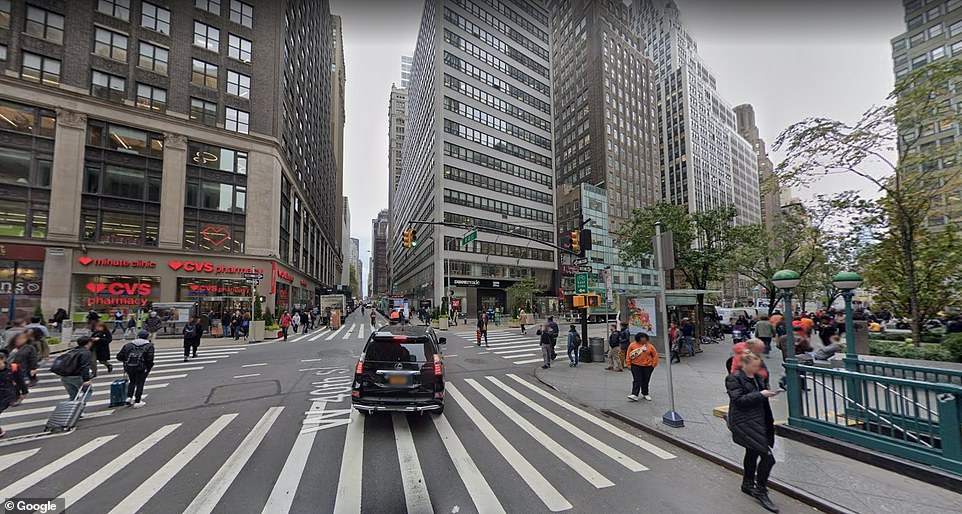 The apparent rise in brazen public drug use comes as New York City is roiled by an alarming surge in criminal activity, with gun violence doubling in the past two months compared with the same period last year.

Mayor Bill de Blasio has blamed the recent spike in shootings on the coronavirus pandemic, arguing that people grew stir crazy after weeks under a strict stay at home order.

But NYPD leaders placed the blame squarely on de Blasio, accusing him of losing control of the city after he bowed to demands of Black Lives Matter protesters and slashed the department’s budget by $1billion.

Police officials have also charged that the crime surge was driven in part by the recent release of thousands of prisoners from Rikers Island under a new bail law and due to coronavirus concerns. 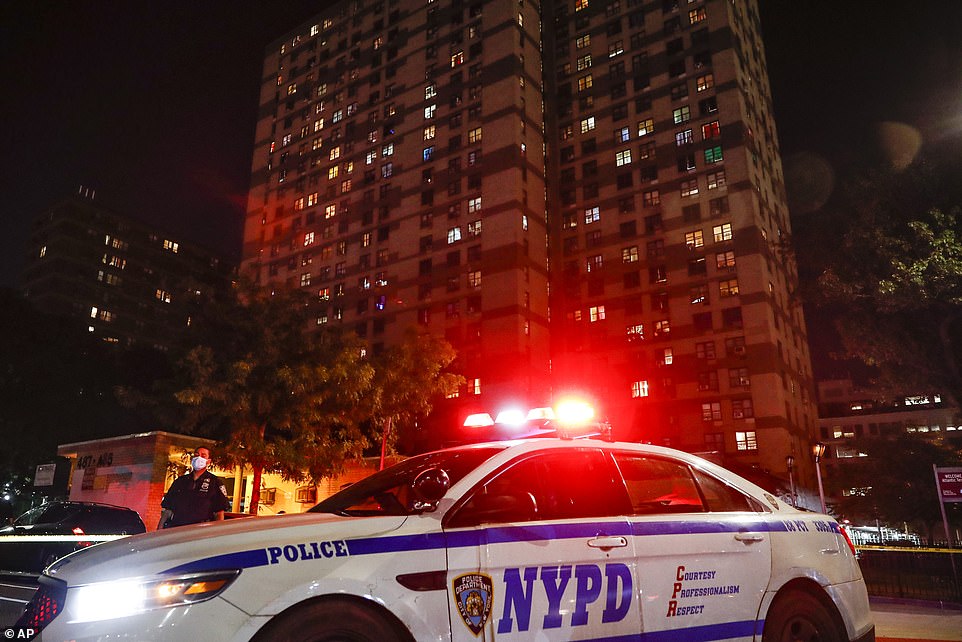 In New York there were 634 shootings through July 12, compared with only 396 in the same period last year, according to police data. Police have made arrests in 23 percent of shootings thus far in 2020, which is below the typical rate of 30 percent. Police pictured at scene of shooting on Atlantic Avenue in Brooklyn on July 18

Former New York Governor George Pataki bemoaned the state of the Big Apple in an interview on Sunday, saying that the violence is a ‘regression to those dark days when criminals ruled the streets’.

‘When I took office, New York was the most dangerous state in America. People got used to safety over the last 20 years. They don’t remember the time back when we were so dangerous,’ the Republican said during a radio interview with John Catsimatidis on 770 AM.

‘I’m worried about the future of New York. We’re going backwards. It’s tragic. We’ve got to change it.’

President Donald Trump has also voiced his concern over the rise of violence in New York and threatened to send in federal officers if local leaders couldn’t buckle down on the shootings.

The violence is now fueling fears that many of the thousands of people who left the Big Apple when the pandemic set in will no longer want to return.

And if they don’t come back, the city and state would take a massive hit in income and sales tax revenue on top of the enormous cost of the coronavirus response and the sustained shutdown. 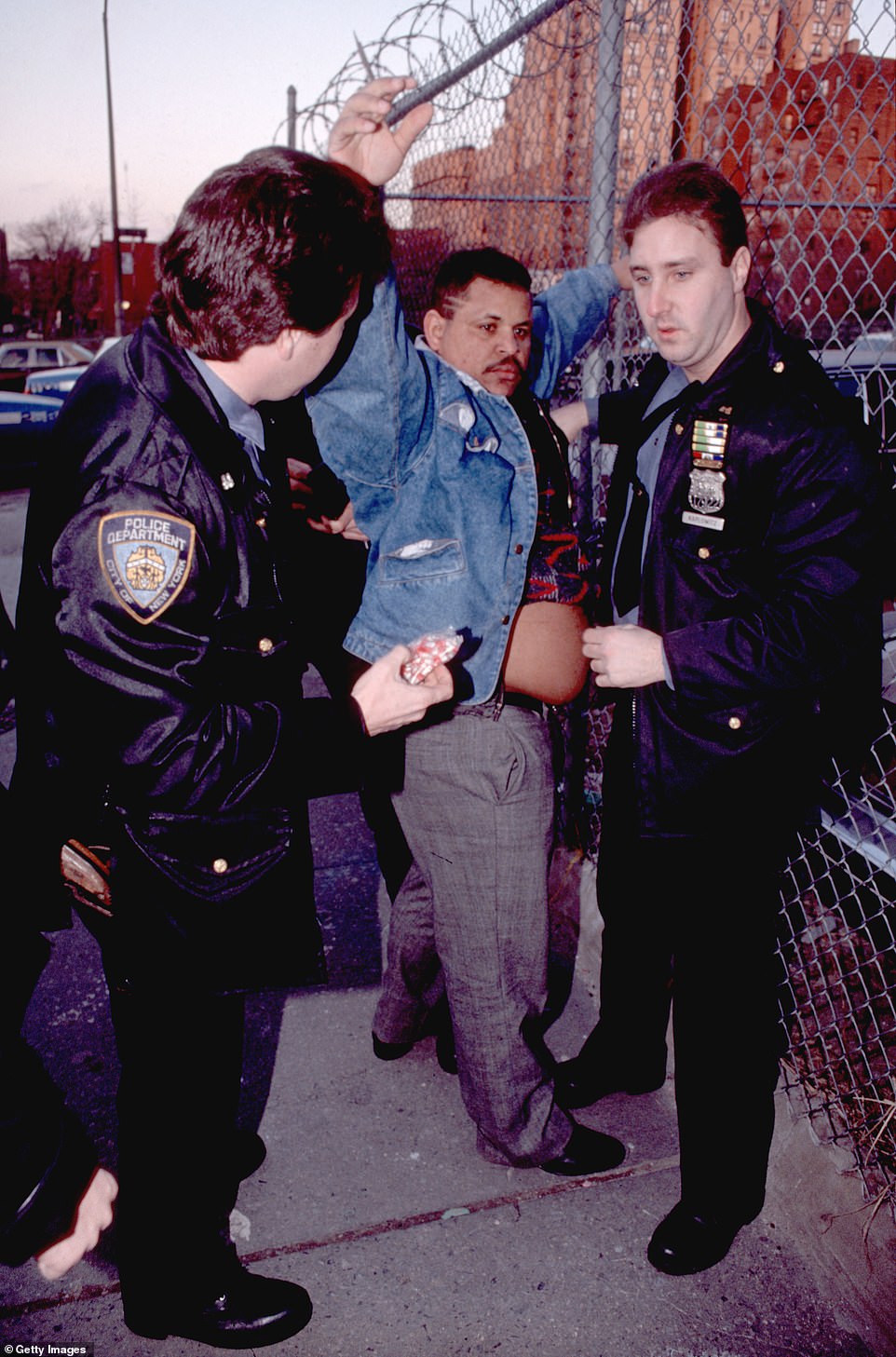 There is a concern that New York City could be headed back to the bad days of 1970s and 80s, when skyrocketing crime rates and the crack epidemic overwhelmed the city. Pictured: a crack dealer is arrested in 1989 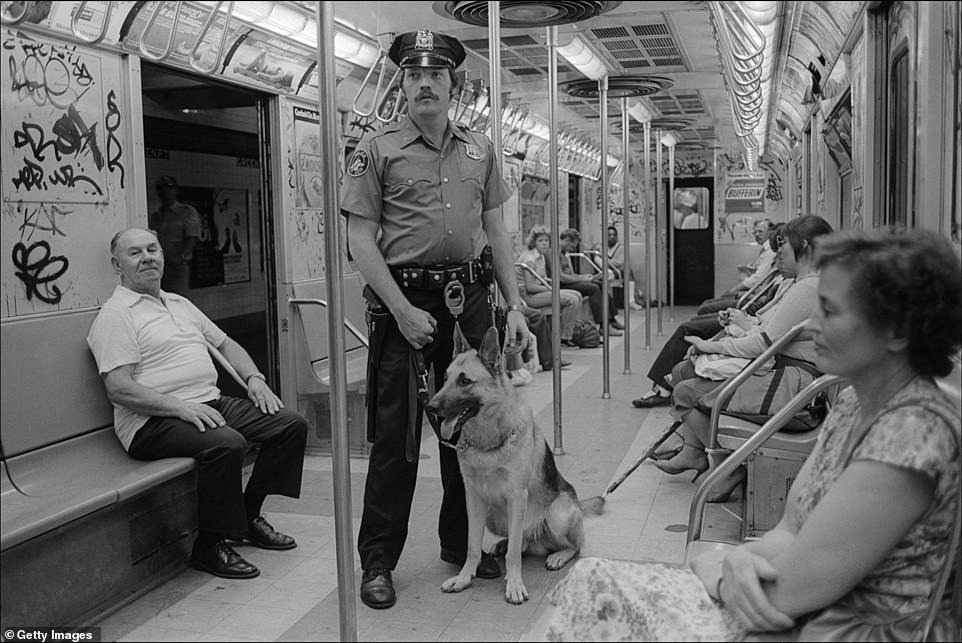 A Transit Authority police officer with a German shepherd stands in a subway car defaced with graffiti as a crime deterrent, New York in 1981 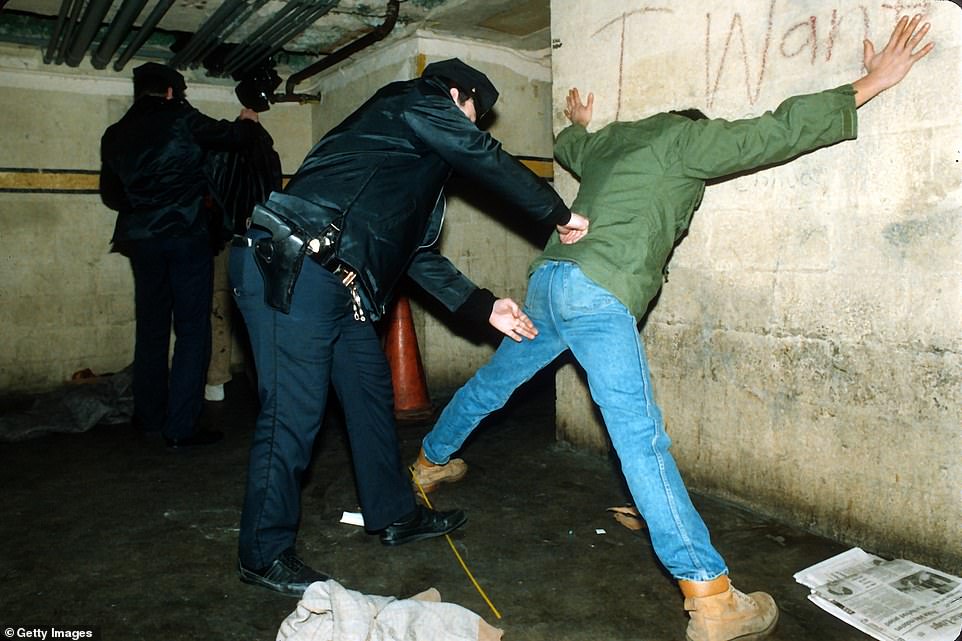 NYPD officers are photographed January 12, 1988 frisking a man, presumed to be homeless, near Port Authority in New York City

The rise in shootings, homelessness and public drug use has raised concerns that New York City could be heading back to the bad old days of the 1970s and 1980s, when crime and crack reigned supreme.

At the time, Midtown Manhattan was a far cry from the relatively clean, safe and family-friendly destination of the 2000s.

Facing a massive deficit and a possible bankruptcy, New York descended into lawlessness ranging from graffiti everywhere and trash in the streets to skyrocketing murder and robbery rates.

The NYPD revolted, going so far as to issue a pamphlet called Welcome to Fear City: A Survival Guide for Visitors to the City of New York.

Crime persisted in the 1980s and the crack and the HIV/AIDS epidemics took hold of the city, ravaging its most vulnerable populations.

Crime started to recede under Mayor David Dinkins, but it wasn’t until Rudy Giuliani moved into Gracie Mansion in 1994 that crime took a nose dive.

Mayor Giuliani and his new police commissioner William Bratton implemented the so-called ‘broken windows’ policy that focused on minor crimes, such jumping the turnstile to get on the subway for free and tagging subway trains with graffiti.

Giuliani also focused on cleaning up Times Square, an area that was populated with pornography and sex workers.

It is unclear the extent that ‘broken windows’ worked and critics pointed out it disproportionately focused on low-income communities and people on color, but murders and crime went down in the latter half of the 1990s and crime remained down until the increase of shootings that have hit the city over the past few months. Police retake Avenue A during a riot outside Tompkins Square Park that erupted after police allegedly beat a homeless man. The late 1980’s and early 1990’s was a period of rapid gentrification in the East Village, and many homeless residents, activists, and squatters, battled the process, frequently clashing with the police around Tompkins Square 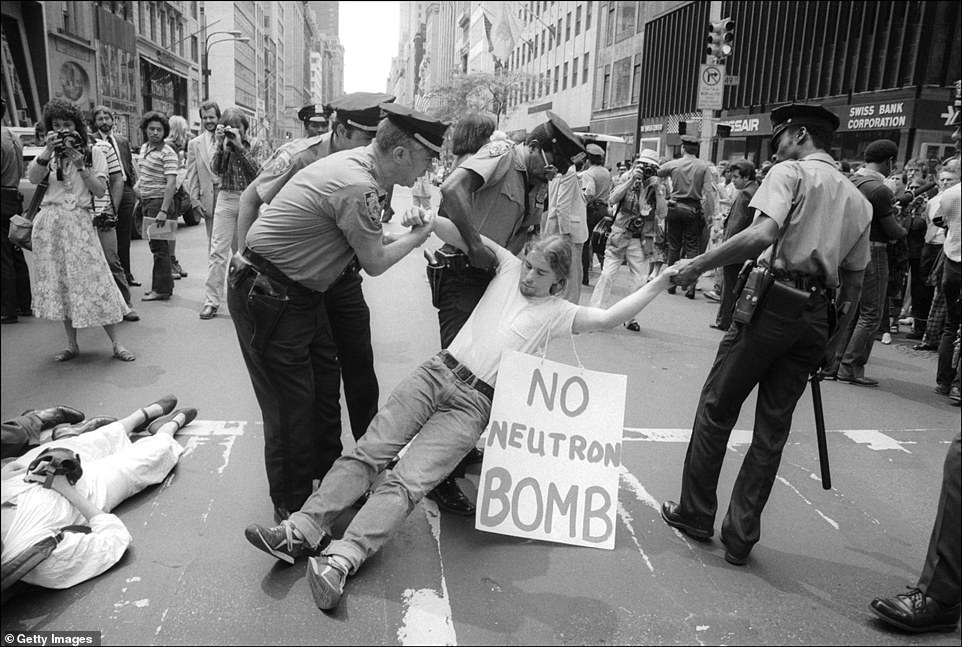 An anti-neutron bomb demonstrator is arrested for sitting in on 5th Ave on August 13, 1981

Current Mayor Bill de Blasio campaigned and won on a platform of equality, such as building affordable housing, and a different type of policing and department than Bloomberg.

But the city that never sleeps ground to a halt in March due to the threat of the COVID-19 pandemic and instituted a lockdown to curb the virus that so far has killed over 18,600 New Yorkers.

The lifeblood of the economy that included tourism, the service industry and small businesses closed. After years of the city’s budgets being in the green, it is now faced with a $9billion hole, high unemployment and protests against police brutality.