Clegg: Brexit can be unbdone as Brexit voters dying off

Nick Clegg today claimed the EU referendum was a ‘photo finish’ and that Remain would win a re-run because Brexit voters are dying off.

The former Lib Dem leader claimed voters had been promised a ‘utopia’ that will not be delivered and Britain should ‘push the pause button’ on Brexit.

The arch-remainer demanded another referendum to thwart Brexit and keep Britain in the Brussels club.

And he risked infuriating older voters by claiming the Remain side would emerge victorious in another contest as older voters would have passed away.

‘It was only 650,000 votes in it and, how can I put this politely, I think acturarily, the high point of the Brexit vote has passed.’

He added: ‘Crucially young people will have to live with the consequences of that referendum vote and the botched negotiations, overwhelmingly want something different.’

The presenter Andrew Marr asked the former deputy PM: ‘Let’s be clear about that, you are saying Brexit voters are dying off?’

Mr Clegg replied: ‘Well, if you look at older voters they voted for Brexit in the largest numbers, and the youngest voters did the opposite.’

His shock comments are likely to spark fury among older voters, as they imply their votes should be worth less because if their age.

The Lib Dems have promised an ‘exit from Brexit’ and are want another referendum to be held on the outcome of the EU deal in the hope the vote will go the other way.

Their pledge bombed on the doorstep with voters in the election, when the party failed to deliver its hoped for surge and only got 12 seats in the vote. 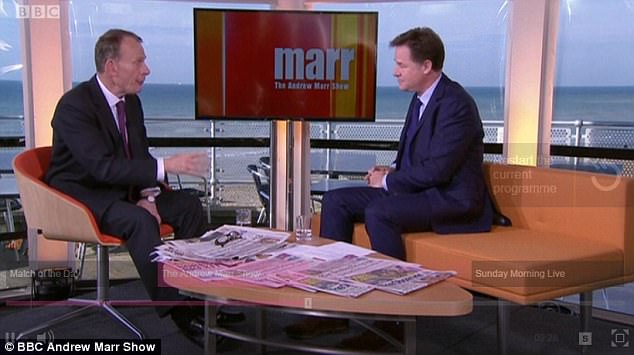 He said Britain will not be able to deliver on these promises and then MPs will have a ‘responsibility’ to demand another referendum on the final deal.

He said: ‘I totally understand why millions of people voted for Brexit – because they were promised a utopia….

‘It will become very obvious by next October that none of that will have been deliverer…given people will have been sold Brexit on a totally false prospectus they should be able to take back control of this process.’

He accused the Tory government of being split over withdrawal – branding Boris Johnson’s recent Brexit tantrum a ‘tedious psycho-drama’.