Eric Glaze, 41, was arrested on Tuesday after the woman escaped from the freezer and told police he had drugged and tried to kill her

A man has been arrested in Ohio for kidnapping and attempted murder after a woman who police say he drugged and put in a freezer, thinking she was dead, escaped after two days, surviving with frostbite.

Eric Glaze, 41, is accused of trying the kill the unnamed victim – who police say he was friends with – after a party on Sunday in Cleveland at an unregistered home for people with mental illness.

He was taken into custody on Tuesday hours after the woman escaped by pushing open the freezer lid and running out of the group home where she says she had been drugged two days earlier.

She got into a car and Glaze followed separately, chasing her in a different vehicle, until fleeing when she crashed.

He was arrested later after being identified by her to police.

Despite spending nearly two days in the freezer unconscious, the woman walked free with ‘severe frostbite’.

She is now recovering in the hospital.

Police say the woman went willingly to the home for a party on Sunday. Why Glaze might have wanted to kill her remains unclear.

‘She came over here on her own volition and essentially, she was administered some sort of narcotic, according to her.

‘She’s not exactly certain of the events, that happened in between, but she woke up and she was in a freezer that was running,’ East Cleveland Police Captain Scott Gardner told Fox 8. 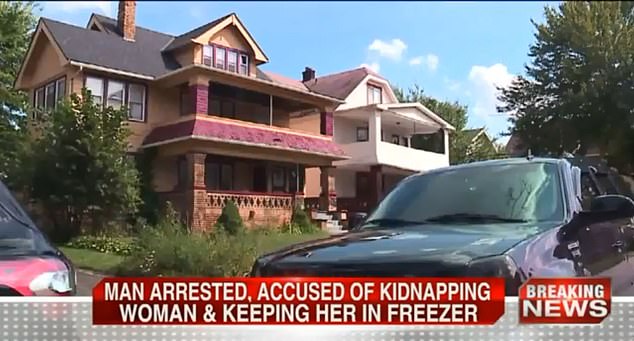 The woman went willingly to a party at this unregistered group home for people with mental illness on Sunday where police say Glaze drugged her. His alleged motive is unclear

According to the woman, more than one person was involved but only Glaze has been arrested.

After breaking out of the freezer, the woman got into a car and drove away but crashed.

When officers responded to the crash, she told them where Glaze lived and he was arrested at his home.