Blue whales around the world are singing a little flat, and scientists say climate change could be to blame.

Researchers discovered the whales have been dropping pitch incrementally over several decade – but have not known why.

A new study found a seasonal variation in the whales’ pitch correlated with breaking sea ice in the southern Indian Ocean.

Scroll down to hear the changing whale songs

Researchers discovered the whales have been dropping pitch incrementally over several decade – but have not known why.

THE LOUDEST ANIMALS IN THE OCEAN

Blue and fin whales are among the loudest animals in the oceans as well as the largest.

Only males sing, humming about as loud as large ships.

The whales’ loud songs can travel more than 1,000 kilometers (600 miles) underwater, allowing the whales to communicate across vast oceans.

The stereotypical song of the Antarctic blue whale spans about 15 to 30 hertz, at the very bottom edge of human hearing, which ranges from about 20-20,000 hertz.

Blue whale songs are in the range of the lowest, longest pipes of large cathedral organs.

The new research also extends the mysterious long-term falling pitch to related baleen whales and rules out noise pollution as the cause of the global long-term trend, according to the study’s authors.

Blue and fin whales are among the loudest animals in the oceans as well as the largest.

Only males sing, humming about as loud as large ships.

The whales’ loud songs can travel more than 1,000 kilometers (600 miles) underwater, allowing the whales to communicate across vast oceans.

Blue whales have been dropping pitch incrementally over several decades, but the cause has remained a mystery.

Pitch, or the perception of how high or low a note sounds, is a result of the frequency of the sound wave, usually measured in hertz.

The authors of the new study use new data from the southern Indian Ocean to rule out noise pollution as the cause of the pitch change.

Instead, the new study suggests the pitch drop is an anatomical consequence of singing less loudly.

The whales’ calls could be quieter due to growing numbers of whales or changes in the ocean due to climate change, according to the study’s authors.

‘We think it is something non-voluntary from the whale. Decrease the call intensity and it will decrease the call frequency, just because of the sound emission mechanism,’ said Emmanuelle Leroy, lead author of the new study and a research fellow at the University of New South Wales in Australia.

The new research also uncovers a seasonal counterpoint in the calls of Antarctic blue whales, potentially related to the noise of melting sea ice.

The new study finds blue whale calls in the southern Indian Ocean increase in pitch during the summer. 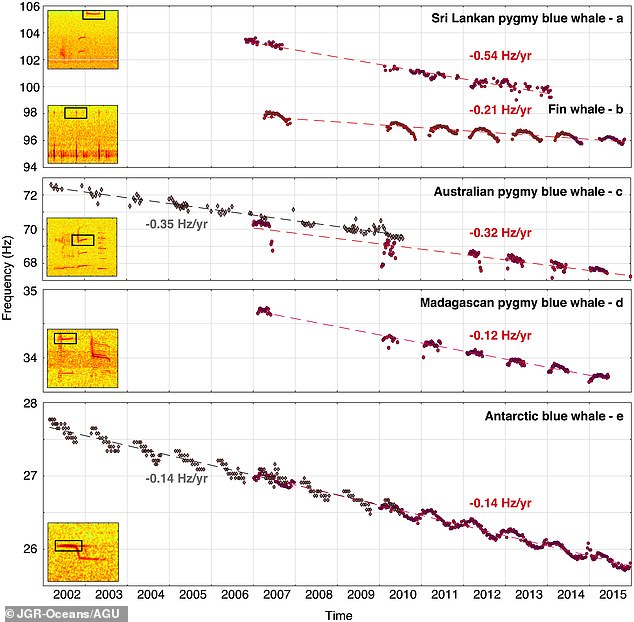 Fin and blue whale call frequencies have declined in the southern Indian Ocean during the period of monitoring, from 2002 to 2015. Datapoints are weekly averaged peak frequencies measured for selected units in the calls. Red points are data from the new study. Black diamonds are data digitized from previously published work. The rates of frequency decrease in hertz per year are the slopes of the fitted dashed lines. Figure reproduced from the new study.

The pitch could be increasing as whales sing louder to be heard over breaking sea ice, according to the study’s authors.

‘The noise is related to the increasing number of free icebergs in summer.

‘When the ice sometimes cracks, like when you put ice in your drink, it makes noise.

‘This noise is really strong and will propagate over really long distances, so we can hear this noise at our northernmost site, up to 26 degrees south.’

Blue (top) and fin whales (bottom) are among the loudest animals in the oceans as well as the largest.

Though fin whales, pygmy blue whales and Antarctic blue whale sing very different songs, the new study observed similar trends in call pitch, falling about 0.12 to 0.54 hertz per year, depending on the species.

The new research also found whale calls rise in pitch by 0.2 – 0.3 hertz from October through February.

Whale song pitch, ambient underwater noise and icebergs: the blue line traces seasonal changes in the pitch, or audio frequency, of blue whale calls. The red trend traces rising and falling ambient noise and the blue histograms show the number of free icebergs per week. This figure from the new study outlines the seasonal correlation between the occurrence of icebergs, the increase in the noise level, and the shift in the blue whales’ “Z‐call” frequency.

Unlike most of the world’s oceans, subject to an increasing mechanical cacophony, the southern Indian Ocean has grown quieter in recent years and its shipping traffic is limited.

Recent population assessments estimate there are 10,000 to 25,000 blue whales globally, up from a few thousand at the end of commercial whaling in the 1970s, but still fewer than 10 percent of their numbers before the 20th century.

Naturally-occurring seasonal ocean noise could explain the seasonal variation in whale call pitch observed by the researchers in the southern Indian Ocean, however.

They observe the seasonal variation in pitch during the months of the austral summer when sea ice breaks up. Iceberg crackles are loud.

They boom for thousands of kilometers in a frequency range overlapping the pitch of the Antarctic blue whales’ calls.

To be heard over the noise the whales may need to get a little louder, the study suggests. Singing louder makes the pitch go up.

‘What’s surprising is the long-term and short-term changes could have the same reason, a change in call intensity, but the change responds to two different causes,’ Leroy said.