As if the specter of droughts, floods, and dwindling resources wasn’t scary enough, a new book details how the a rapidly changing climate is putting Los Angeles, the second biggest city in the U.S., at unique risk of a deadly outbreak of bubonic plague.

In a report published in the LA Times, journalist and author David K. Randall’s breaks down how climate change creates a perfect storm for some of the key factors behind outbreaks of the plague.

Randall recently released a book titled ‘Black Death at the Golden Gate: The Race to Save America from the Bubonic Plague.’

Among the ripple effects of a rapidly changing climate, says Randall, are warmer temperatures which for some species will spell disaster.

For others, however, like rats, fairer climates mean longer active breeding periods.

Rats act as vehicles for fleas which carry the plague. Once those fleas come in contact with humans it can spread quickly to devastating results

‘Longer, hotter weather patterns are extending the breeding season of rats and rodents, leading to a steep increase in their numbers in places like Los Angeles, New York and Houston,’ wrote Randall in the op-ed for the LA Times.

Citing one of the world’s leading authorities on rats, Robert Corrigan, who holds a doctorate in urban rodentology from Purdue University and has been profiled by the New Yorker, Randall says urban rat populations have increased 15 to 20 percent globally.

According to the UN, an overwhelming 68 percent of humans worldwide are expected to live in urban environments by 2050.

Those rats, explains Randall, could be the linchpin in a potential dangerous situation, as they tend to harbor fleas containing bubonic plague bacterium.

‘Any climate change conditions that increase the number of fleas [also increase] the distribution of plague,’ said Dr. Janet Foley, a professor of medicine and epidemiology at UC Davis in Randall’s report.

The situation Randall outlines in the report would apply to almost every metropolis across the globe, but according to him, Los Angeles is in a particularly harrowing position due to one key factor: homeless populations. 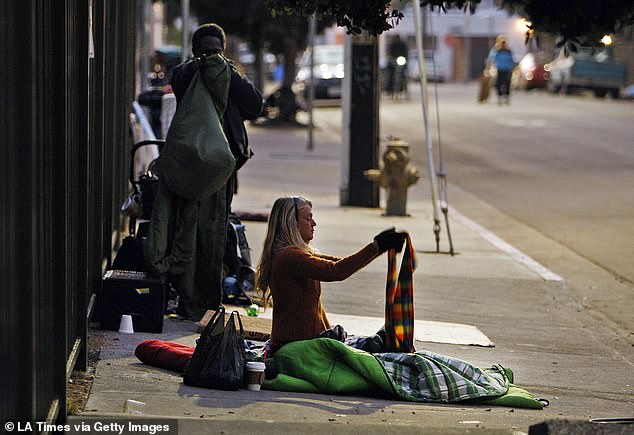 Homeless populations would be among the most at-risk people since they are often forced to live in proximity to rodents and other pests. File photo

According to a previous report from the LA Times, homeless populations have boomed in the last several years, rising by about 39 percent since 2014 to 53,000 people in 2019.

Those people, who often live in close proximity to fleas and rats, could be the first to be affected says Randall, and from there the disease could spread.

While it may seem outlandish that the world is still at risk of another outbreak of Bubonic plague, the impact of climate change has been noted by other modern studies.

Last year, researchers published a report in Proceedings of the National Academy of Sciences that links a change in climate and rat populations to the incidence and spread of the plague in Europe. 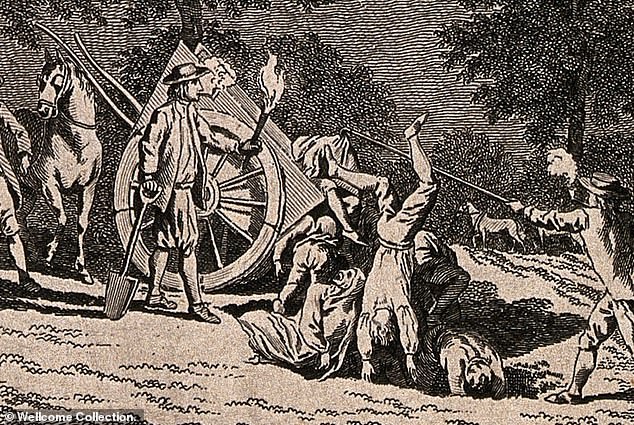 The world’s most dangerous occurrence of bubonic plague, the Black Death, and one of the most devastating pandemics ever recorded occurred in the mid 1300’s and was responsible for killing as many as 200 million people across Europe, Asia, and Africa.

To help mitigate the problem, experts interviewed by Randall say that cities can begin to pointedly reduce rat populations, especially since humans have also worked to stifle the amount of predators like snakes and coyotes who keep rodent numbers in check.

‘It goes against our modern sensibilities, but there is nothing else to keep their populations bound,’  said

The plague, caused by the bacterium Yersinia pestis, was the cause of some of the world’s deadliest pandemics, including the Justinian Plague, the Black Death, and the major epidemics that swept through China in the late 1800s.

The disease continues to affect populations around the world today.

The Black Death of 1348 famously killed half of the people in London within 18 months, with bodies piled five-deep in mass graves.

When the Great Plague of 1665 hit, a fifth of people in London died, with victims shut in their homes and a red cross painted on the door with the words ‘Lord have mercy upon us’.

The pandemic spread from Europe through the 14th and 19th centuries – thought to come from fleas which fed on infected rats before biting humans and passing the bacteria to them.

But modern experts challenge the dominant view that rats caused the incurable disease.

Experts point out that rats were not that common in northern Europe, which was hit equally hard by plague as the rest of Europe, and that the plague spread faster than humans might have been exposed to their fleas.

Most people would have had their own fleas and lice, when the plague arrived in Europe in 1346, because they bathed much less often.