Climate change could wipe out up to HALF of all plant and animal life on Earth by 2070 if temperatures keep increasing, study warns

Climate change could wipe out up to half of all plant and animal life on Earth by 2070 if temperatures keep increasing, study warns.

Experts from Arizona University tracked species in hundreds of locations and temperature changes to reveal how much heat they could tolerate.

Rather than ‘average temperature changes’, the biggest threat from climate change is the ‘maximum temperatures’ the planet could reach, the authors claim.

Even if we stick to the Paris Agreement to combat climate change we would still lose up to 20 per cent of plants and animals by 2070, the authors predict.

The agreement calls for efforts to keep global average temperatures from climbing by no more than 3.6 degree Fahrenheit above 1880 levels – when records began.

Commenting on the findings, study author Dr John Wiens, at Arizona University, said: the results read like a ‘choose your own adventure story’.

‘If we stick to the Paris Agreement to combat climate change, we may lose fewer than two out of every 10 plant and animal species on Earth by 2070.

‘But if humans cause larger temperature increases, we could lose more than a third or even half of all animal and plant species, based on our results.’

To estimate the future perils of climate change for wildlife, the ecologists looked to local extinctions that have already happened.

This was based on repeated studies of plants and animals over time.

They analysed data from 538 species and 581 sites around the world, focusing on plant and animal species that were surveyed at least 10 years apart at the same sites.

They gathered climate data from the time of the earliest survey on each site and compared it to the most recent survey, as well as studying the biodiversity.

The results revealed that almost half of the 538 species had already gone extinct at one or more sites between the first and most recent survey.

In more detail they found that about half of the species became locally extinct when maximum temperatures increased by more than 0.9 degrees Fahrenheit.

If the temperature increased by more than 5 degrees Fahrenheit then more than 95 per cent of species died off.

The ecologists behind the study said accurately predicting biodiversity loss from climate change requires understanding specifically what causes extinctions, and what mechanisms species could deploy to survive.

‘When we put all of these pieces of information together for each species, we can come up with detailed estimates of global extinction rates for hundreds of plant and animal species.’ 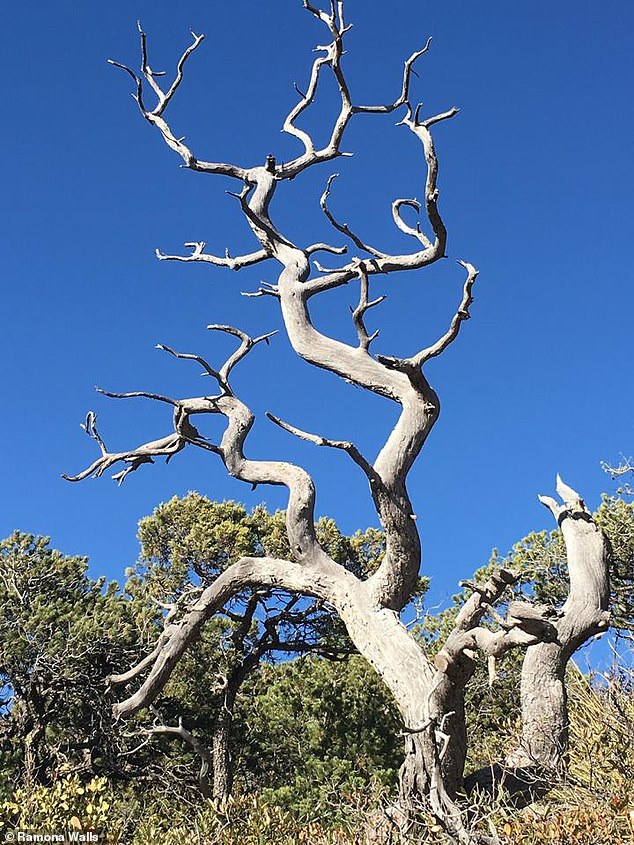 A dead Alligator Juniper from Arizona. Unable to cope with rising temperature extremes, repeated surveys have shown that this species is being pushed up the mountain slopes under the impact of climate change.

The study identified maximum annual temperatures – the hottest daily highs in summer – as the variable that best explains whether a population will go extinct.

Average temperatures turned out to be a ‘misleading’ predictor of local extinction despite being used widely as a proxy for overall climate change.

Previous studies have focused on dispersal – or migration to cooler habitats – as a means for species to ‘escape’ from warming climates.

However, the authors of the current study found that most species will not be able to disperse quickly enough to avoid extinction, based on their past movements.

The ecologists also warned that tropical species are between two to four times more likely to perish, compared to wildlife in temperate regions.

Dr John Wiens said: “This is a big problem, because the majority of plant and animal species occur in the tropics.”

The findings were published in the journal Proceedings of the National Academy of Sciences.

WHAT IS EARTH’S SIXTH MASS EXTINCTION?