Climate change is shape-shifting the bodies of birds in the Amazon, the world’s largest rainforest, a concerning new study shows.

Researchers have found several bird species have become smaller with longer wings over several generations in response to hotter and drier conditions.

Affected species include the golden-crowned spadebill, the gray antwren, McConnell’s flycatcher and the dusky-throated antshrike. 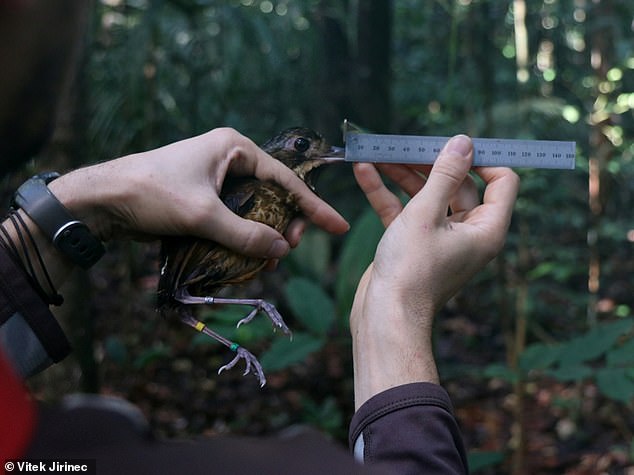 Variegated antpitta (Grallaria varia). The team studied data collected on more than 15,000 individual birds that were captured, measured, weighed, marked with a leg band and released, over 40 years of field work in Brazilian Amazonia 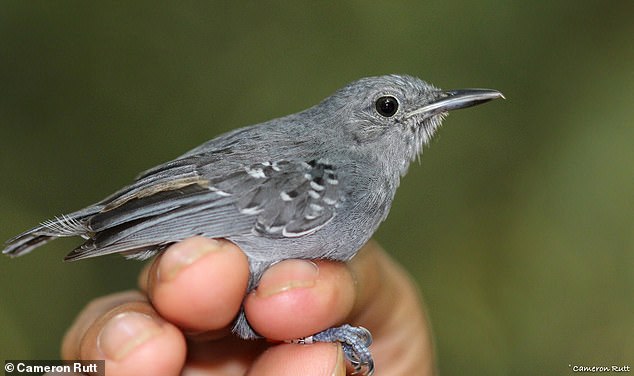 Adapting to shifting environmental conditions may include ‘new physiological or nutritional challenges’ for birds, say the scientists, who claim to have eliminated other factors that may have influenced these changes – in other words, there’s no doubt climate change is to blame.

‘Even in the middle of this pristine Amazon rainforest, we are seeing the global effects of climate change caused by people, including us,’ said study author Vitek Jirinec, an ecologist at the Integral Ecology Research Center, Blue Lake, California.

Jirinec and colleagues studied data collected on more than 15,000 individual birds that were captured, measured, weighed, marked with a leg band and released, over 40 years of field work in Brazilian Amazonia, at a research location near the city of Manaus.

In total, the scientists investigated 77 species of rainforest birds that live there, from the cool, dark forest floor to the warmer, sunlit midstory.

The midstory is the layer of vegetation in a forest consisting of trees with a height somewhere between the heights of the smallest and tallest trees. 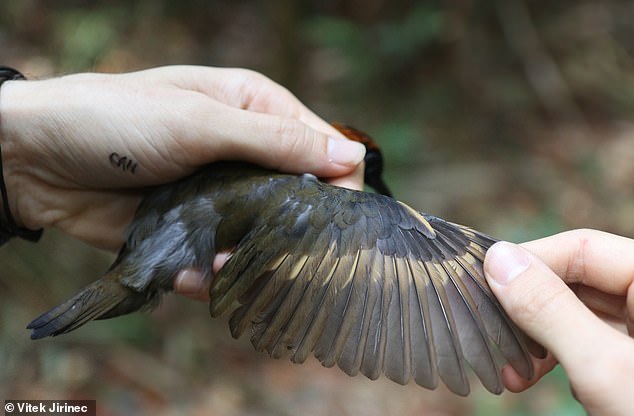 The wing of a rufous-capped Antthrush (Formicarius colma). The data revealed nearly all of the birds’ bodies have reduced in mass, or become lighter, since the 1980s 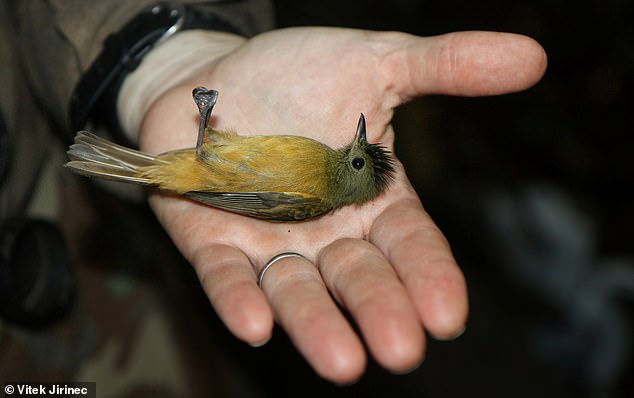 McConnell’s flycatcher (Mionectes macconnelli). This species shows decreasing mass and mass-to-wing ratio. Species were captured and measured before being released

The data revealed nearly all of the birds’ bodies have reduced in mass, or become lighter, since the 1980s.

The greater the surface area-to-volume ratio of an animal, the more heat it loses relative to its volume.

The larger the animal, the smaller the surface area-to-volume ratio and so the less relative area there is to lose heat.

This means that for identically shaped animals of different sizes, the large one will keep its temperature more easily.

In other words, being bigger means being warmer.

All species studied currently have a lower average mass than they did in the early 1980s.

In all, 36 species lost up to almost 2 per cent of their body weight per decade since 1980.

For an average bird species that weighed about 30 grams in the 1980s, the population now averages about 27.6 grams.

‘These birds don’t vary that much in size. They are fairly fine-tuned, so when everyone in the population is a couple of grams smaller, it’s significant,’ said co-author Philip Stouffer, conservation biologist at Louisiana State University.

The team also discovered that birds residing in the highest section of the midstory – and the most exposed to heat and drier conditions – had the most dramatic change in body weight and wing size.

These birds also tend to fly more than the birds that live on the forest floor.

The thinking is that these birds have adapted to a hotter, drier climate by reducing their ‘wing loading’ – the total mass divided by the area of its wing – to become more energy efficient in flight.

This is akin to a fighter jet with a heavy body and short wings that requires a lot of energy to fly fast, compared with a glider plane with a slim body and long wings that can soar with less energy. 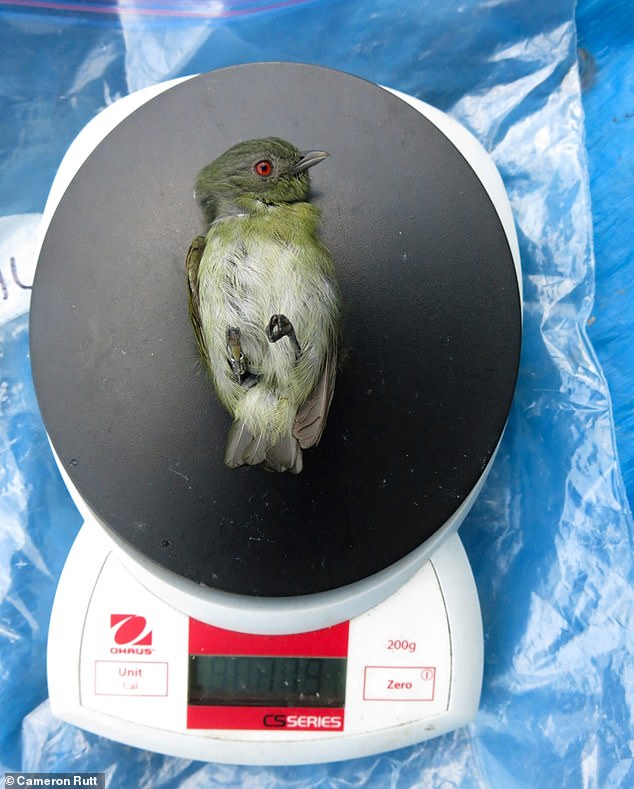 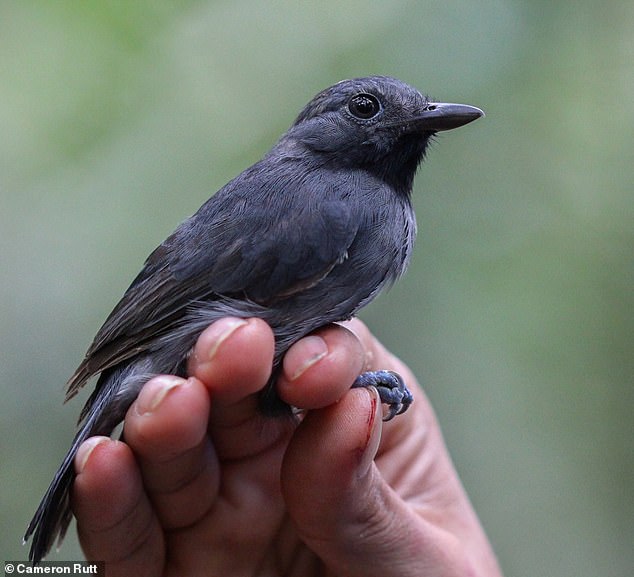 If a bird has a higher wing loading, it needs to flap its wings faster to stay aloft, which requires more energy and produces more metabolic heat.

The data set covers a large range of the rainforest so the changes in the birds’ bodies and wings across communities are not tied to one specific site, which means that the phenomenon is common throughout a wide area. 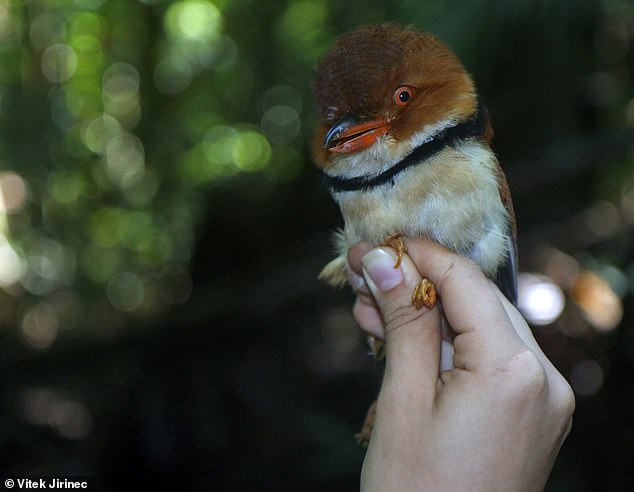 Collared puffbird (Bucco capensis) – a representative of midstory species. The midstory is the layer of vegetation in a forest consisting of trees with a height somewhere between the heights of the smallest and tallest trees 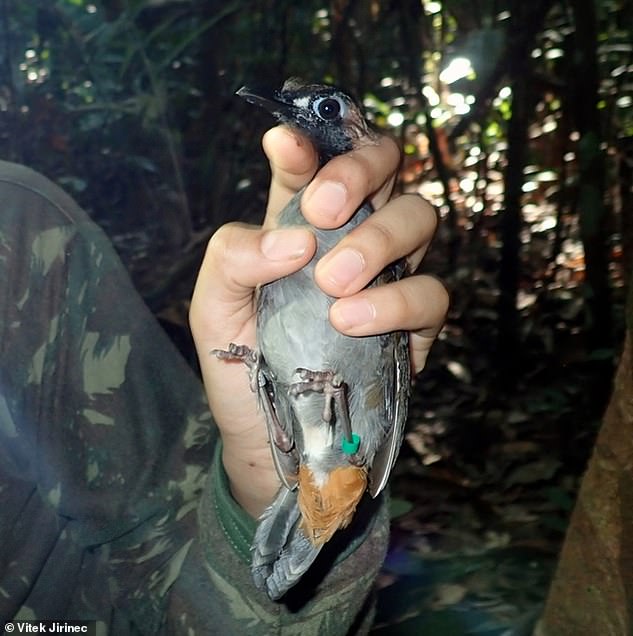 Pictured is a black-faced Antthrush (Formicarius analis). The study indicates that tropical birds in the heart of the world’s largest rainforest are rapidly evolving in response to pressures from human-caused climate change

‘This is undoubtedly happening all over and probably not just with birds,’ Stouffer said.

‘If you look out your window, and consider what you’re seeing out there, the conditions are not what they were 40 years ago and it’s very likely plants and animals are responding to those changes as well.

The question of the future capacity of Amazonian birds to deal with increasingly hotter and drier surroundings, especially in the dry season, remains unanswered, the team conclude.

Their study has been published in the journal Science Advances.

MAMMALS ARE SHAPE-SHIFTING, TOO! WARM-BLOODED CREATURES ARE EVOLVING TO HAVE LARGER BEAKS, LEGS AND EARS TO BETTER REGULATE BODY TEMPERATURES AS EARTH GETS HOTTER, STUDY FINDS

As Earth gets hotter, many warm-blooded creatures are evolving larger beaks, ears and legs to allow them to better regulate their body temperature, a 2021 study found.

Appendages like birds’ beaks and mammalian ears can be used to dissipate excess body heat, with such tending to be larger in warmer climates.

Experts led from Australia’s Deakin University reviewed past studies into various species that are changing shape, finding that climate change may be to blame.

They found evidence of changes in appendage sizes of up to 10 per cent, a figure expected to continue to grow as our planet warms further.

According to the researchers, mammal species are undergoing noticeable changes.