While it might be common to assume that Earth rotates around a fixed axis, scientists say that isn’t quite the case.

Our planet drifts and wobbles as it spins, shifting roughly four inches per year in a phenomenon known as polar motion.

But, according to new research, climate change may be making the effect more extreme.

A NASA study has found that the 7,500 gigatons of Greenland ice that melted into the ocean during the 20th century played a major role in pushing Earth’s spin axis.

In addition, the researchers found that glacial rebound and mantle convection contribute to the motion too, providing fresh insight on the mass changes that cause our planet to wobble.

Our planet drifts and wobbles as it spins, shifting roughly four inches per year in a phenomenon known as polar motion. The influence of Greenland ice loss (blue), postglacial rebound (yellow) and deep mantle convection (red) are shown

Over the course of the 20th century, Earth’s spin axis drifted more than 11 yards (10 meters).

In the past, scientists have attributed polar motion entirely to the effects of glacial rebound, the researchers explain.

Glacial rebound is the phenomenon in which the land slowly bounces back to its original position after glaciers melt.

But, the new work shows that melting ice – particularly that from Greenland – has a significant impact on Earth’s drifting axis.

‘The traditional explanation is that one process, glacial rebound, is responsible for this motion of Earth’s spin axis,’ said lead author Surendra Adhikari of NASA’s Jet Propulsion Lab.

‘We assembled models for a suite of processes that are thought to be important for driving the motion of the spin axis.

‘We identified not one but three sets of processes that are crucial – and melting of the global cryosphere (especially Greenland) over the course of the 20th century is one of them.’

The team analyzed data spanning the entire 20th century, during which Greenland’s ice decreased by about 7,500 gigatons.

Given Greenland’s location, this has no small effect. 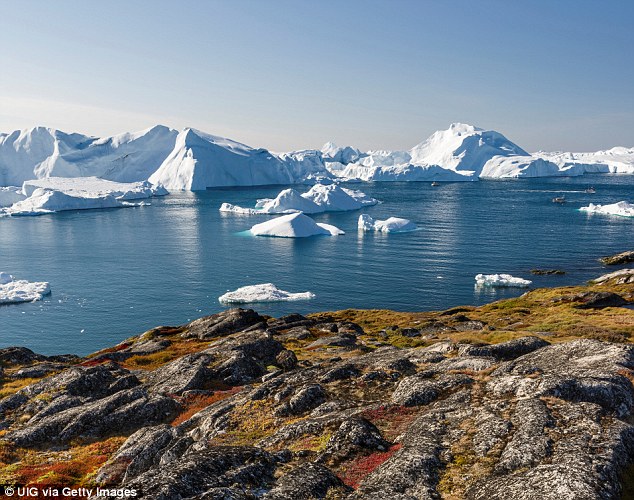 A NASA study has found that the 7,500 gigatons of Greenland ice that melted into the ocean during the 20th century played a major role in pushing Earth’s spin axis. File photo

The report also found that every five years of delay beyond 2020 in peaking global emissions would mean an extra 20 centimetres (8 inches) of sea level rise by 2300.

‘There is a geometrical effect that if you have a mass that is the 45 degrees from the North Pole – which Greenland is – or from the South Pole (like Patagonian glaciers), it will have a bigger impact on shifting Earth’s spin axis than a mass that is right near the Pole,’ said co-author Eric Ivans, of JPL.

Instead of just one thing driving the shift, researchers say there are three factors to be considered.

Mantle convection, which describes the circulation of material in the mantle caused by the Earth from Earth’s core, also contributes to the wobble.

The researchers say the newly identified contributors could help us assess how long-term processes are affecting polar motion – and now climate change may be accelerating it.