A climber who watched as an apartment-building-sized boulder tore away from Yosemite’s El Capitan on Wednesday, killing one and injuring another, survived a second rockslide at the National Park on Thursday.

Peter Zabrok was scaling the popular rock face with climbing partners Ryan Sheridan from Yosemite and Irishman Patrick Mcredmond when the first rockslide hit on Wednesday at 1.55pm.

They narrowly avoided being hit by the falling rocks, having just climbed past the 130ft x 65ft piece of granite which tore off.

On Thursday, they were forced to continue on their path to the summit because the route to get to ground was blocked by the first day’s fall.

At around 4.30pm, as they reached the 3000ft summit, another fall which he said was ‘ten times as bigger’ as Wednesday’s occurred. Again, it happened directly beneath the three men.

Rockfall is common at the California National Park. There have been 16 deaths as a result of them since it opened in 1857.  Wednesday’s was the first in 18 years.

Thursday: Climber Peter Zabrok filmed his climbing partner (above) watching a second rockfall from the El Capitan summit on Thursday. The men said it was ‘ten times bigger’ than the one which they survived on Wednesday 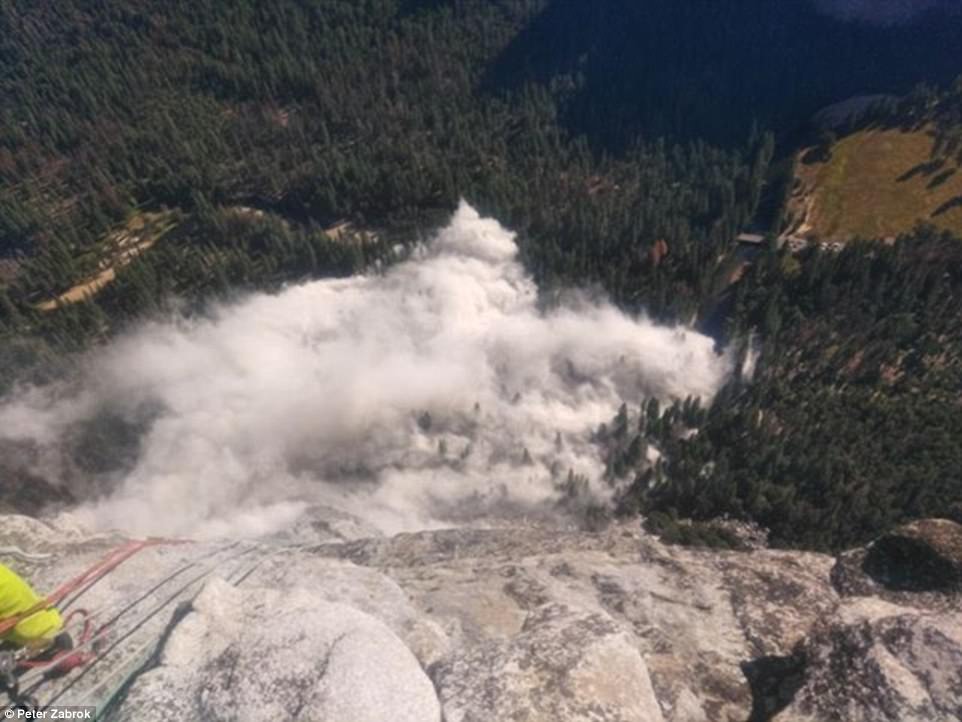 View from the summit: The climbers said they felt the earth ‘shake’ as the rock tore away on Thursday at 4.30pm 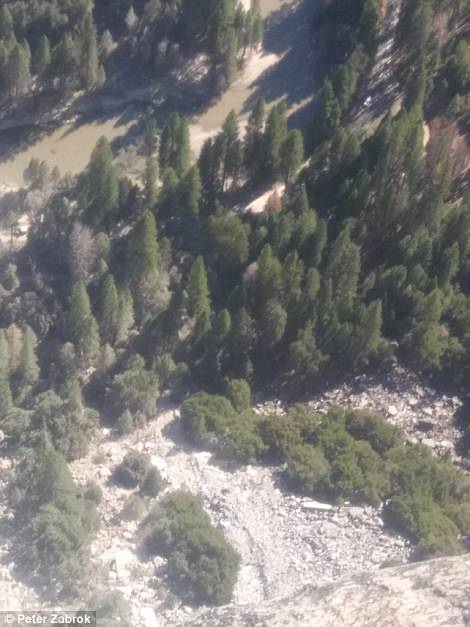 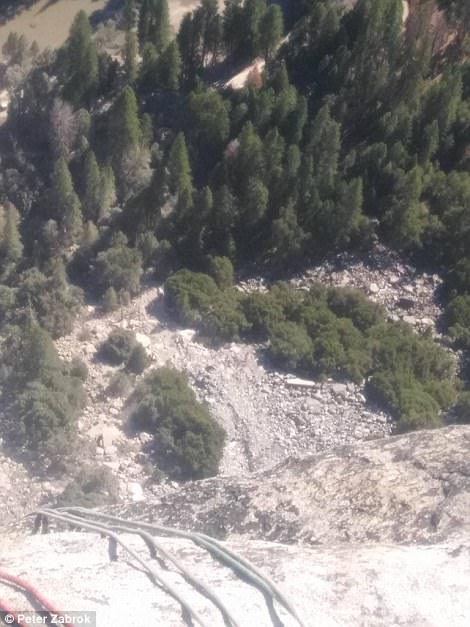 ‘I literally felt the earth shake,’ Zabrok told DailyMail.com on Thursday as he recovered at the summit, 30 minutes after the second rockslide.

It is not yet known if anyone was injured. Wednesday’s catastrophe killed a British man and severely injured his wife who remains in hospital in a critical condition.

After the rockslide on Wednesday, Zabrok and his team set up camp next to where the first piece of granite fell from.

‘We had no choice but to continue to the summit. It was impossible to retrace our route because our route was lying at the base of the wall,’ he said.

As day broke, they set off on their second attempt to reach the famous summit.

At around 4.30pm, the second, larger second rock slide occurred, shaking the trail as Zabrok and his team clung on.

‘I estimate it to be ten times the size of the rockfall yesterday.

‘We are safe and this area the wall has not been disturbed. We literally felt the Earth shaking beneath our feet. How rad is that?’ he said. 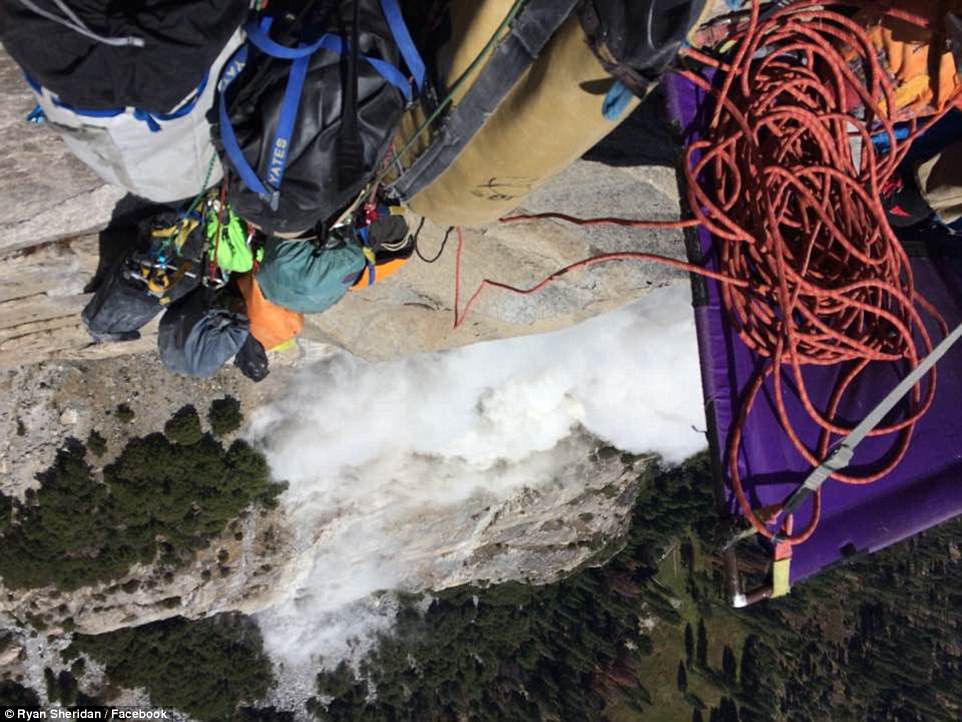 Wednesday: Another climber captured Wednesday’s 100ft x 100ft rockfall on Wednesday which killed one person and injured another 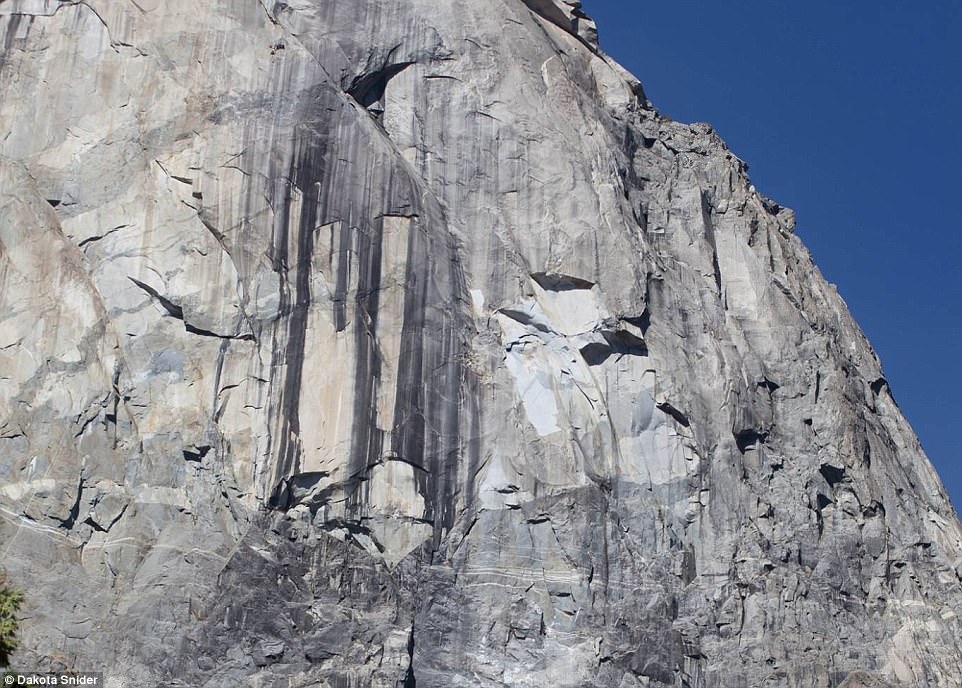 Site of tragedy: The huge crater where the massive block broke lose and fell 2,000ft to the valley floor can be seen in the center of this image 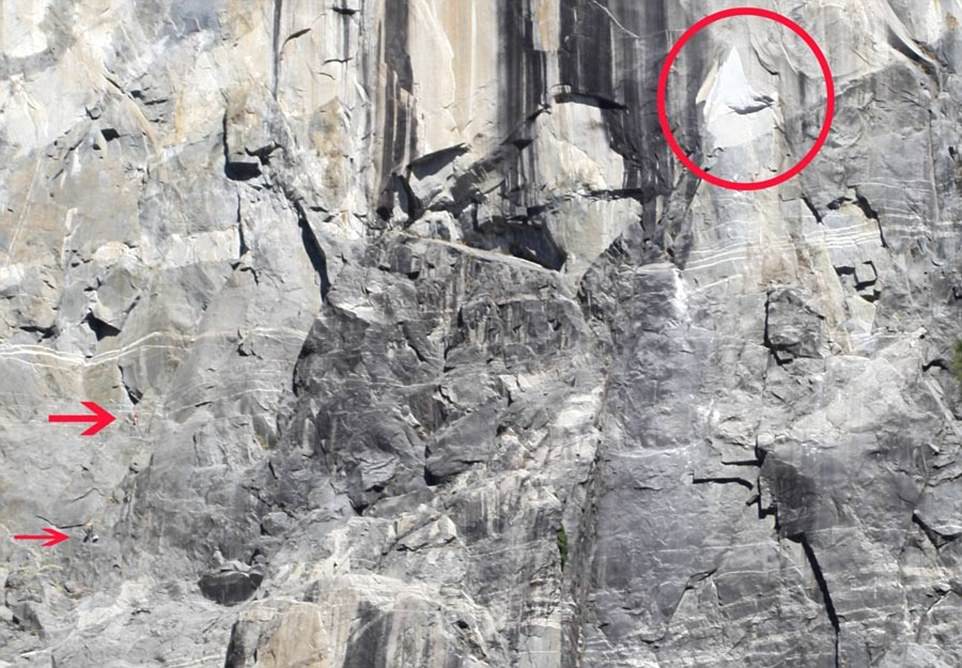 Massive scale: This image taken in 2010 shows climbers (arrows) dwarfed at the site of a smaller rock fall (circled) in Yosemite 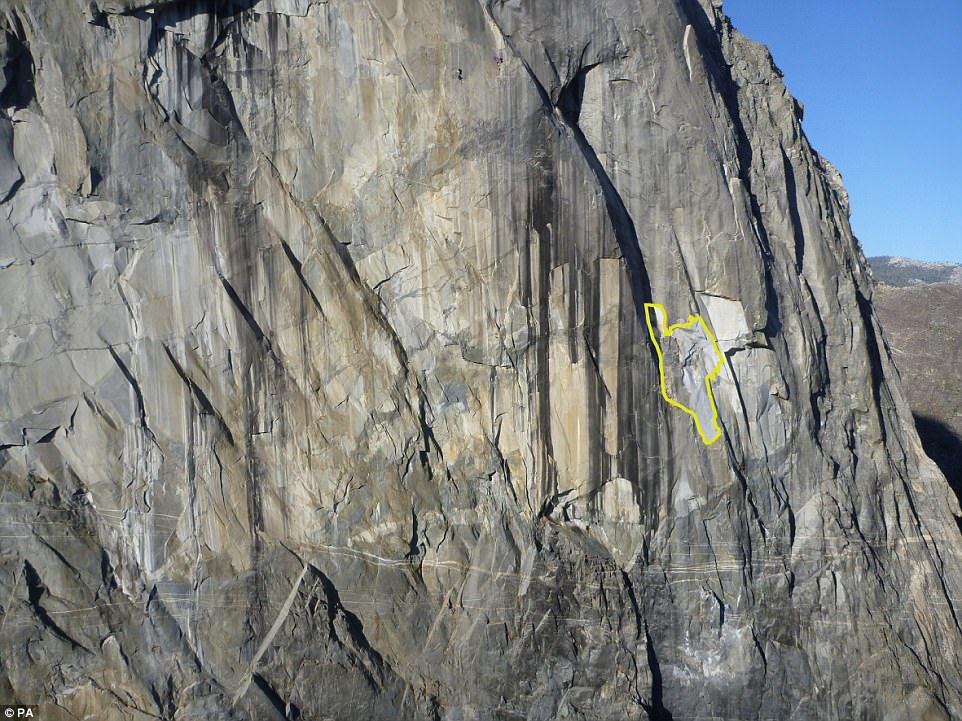 An illustration of the size of the piece of granite which fell on Wednesday. Park rangers say it was 131ft tall, 65ft wide and around 3-4ft thick 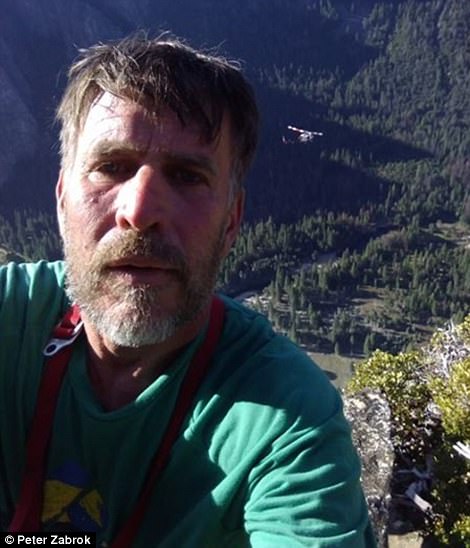 On Thursday, Zabrok (above) and his partners remained on the summit. They will begin their descent on Friday, taking a different route to the one they used on the way up

Zabrok and his team will descent tomorrow on an undisturbed section of the trail.

One of the roads which leads away from El Capitan was closed on Thursday as a result of the second fall.

Park rangers say they do not know if anyone has been injured.

Large rock fall happens a few times a year at Yosemite but there is no way to predict when or where it will occur.

Thousands of stunned tourists witnessed the tragedy on Wednesday but none were hurt.

Zabrok – seasoned rock climber with decades of experience – said the sound of the fall was like ‘a thousand freight trains derailing at once but louder’.

‘There were two people walking at the base and the appeared to get hit and completely buried.

‘We are past it and we are safe. Had we been underneath it we would have died for sure. I give thanks to God and my Saviour Jesus Christ,’ he said on Wednesday night.

Climbers die every year in Yosemite and rock fall is just one of the dangers they face. The last climber to be killed by rock fall was Mason Robinson who was hit by a rock an fell 280ft to his death. 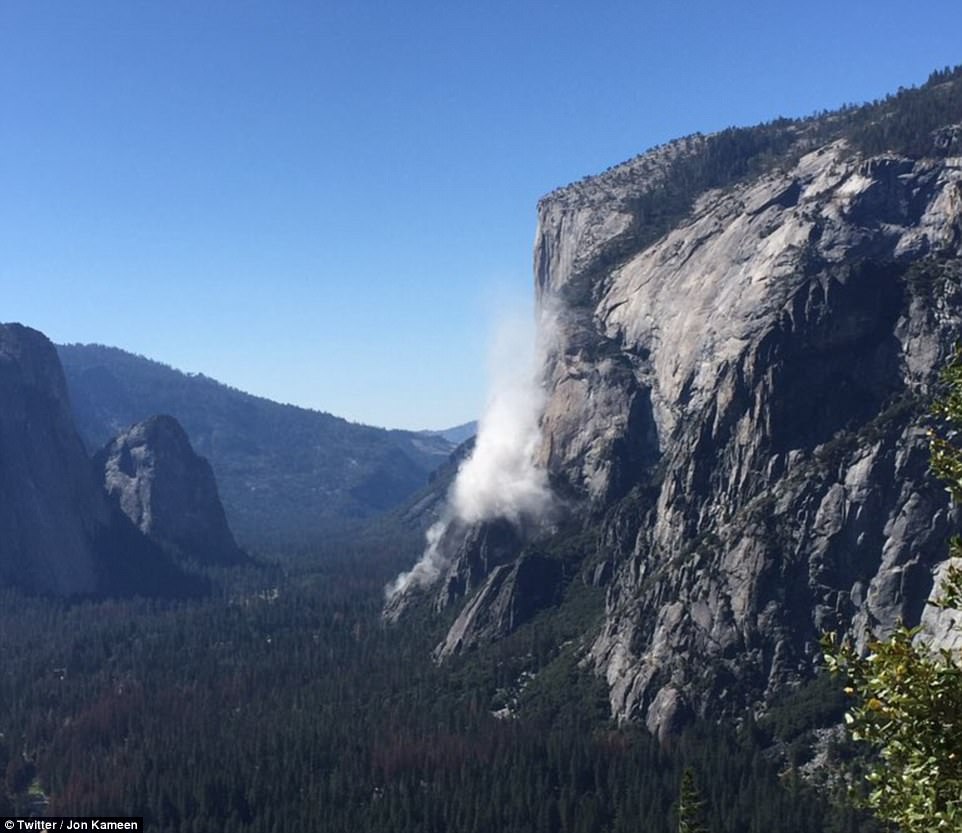 WHAT CAUSES ROCK FALL IN YOSEMITE?

Rock fall in Yosemite is impossible to predict and is caused by geological processes that fracture the granite faces of the valley over thousands of years.

Erosion caused by freeze-thaw cycles, waterfalls and the movement of the Earth’s tectonic plates gradually creates fractures in the rock.

Rock fall occurs when these fractures completely separate a block or blocks from the face .

The large piles of boulders knows as talus at the foot of every face in Yosemite are created by rock fall.

Around 1,000 large rockfalls have been recorded in Yosemite over the past 150 years.

Subsequent smaller rockfall also put rescuers in danger as they searched for survivors.

Zabrok added: ‘There have been three subsequent enormous rock falls and this rescuer is in tremendous peril.’

In a statement after Wednesday’s incident, Yosemite National Park said: ‘ A rockfall of undetermined size occurred on El Capitan at about 1:55 pm today. The release point appears to be near the “Waterfall Route,” a popular climbing route on the East Buttress of El Capitan.

‘This is the area where Horsetail Fall flows in winter and spring conditions.

‘There is one confirmed fatality and one injured person. Park rangers are working to transport the injured person to receive medical care outside of the park.’

Later, they revealed that it was the first death in the park for 18 years.

‘After the initial rockfall, Yosemite National Park Rangers and the Search and Rescue team entered the area looking for people at the base of the rockfall.

‘Two people were found, resulting in one fatality and a serious injury. The victims, a couple visiting the park from Great Britain, were in the park to rock climb but were not climbing at the time of the initial rockfall. The male was found deceased and the female was flown out of the park with serious injuries.

‘Rockfalls are a common occurrence in Yosemite Valley and the park records about 80 rockfalls per year; though many more rockfalls go unreported. 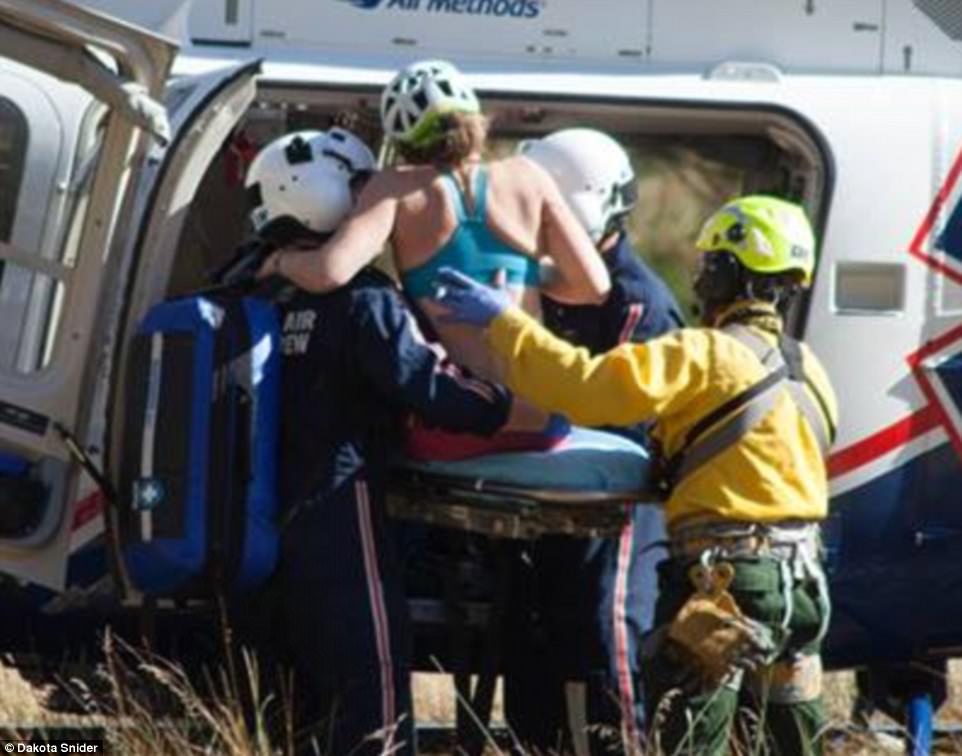 Survivor: A woman is lifted in to an air ambulance after being rescued from the mountain. One witness saw two climbers being buried by the avalanche of boulders 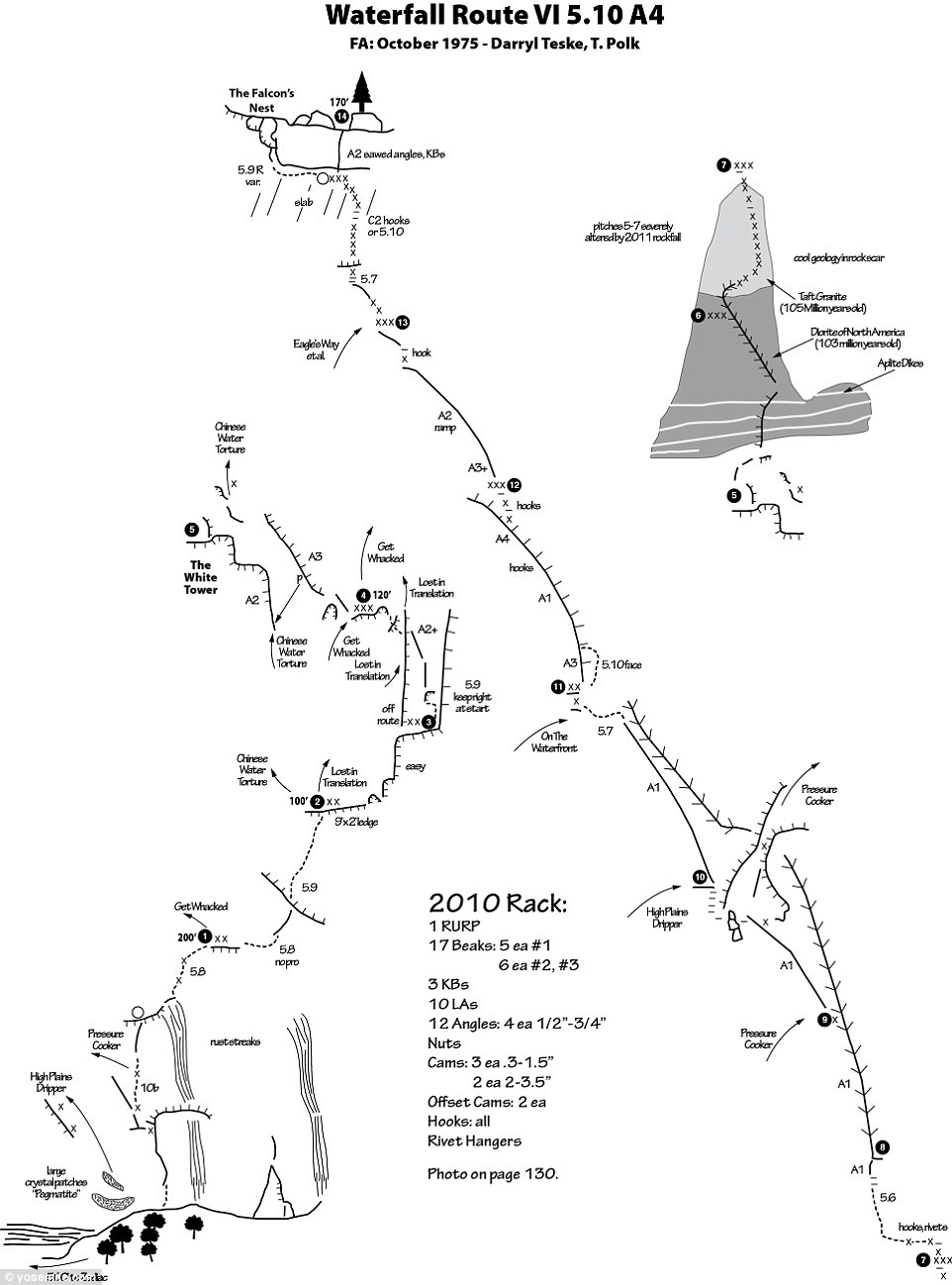 Challenging route: The rock rock fall occurred near the popular waterfall route. It follows the path of the Horse Tail Falls waterfall which plunges 3,000ft to the valley in spring

‘The rockfall from El Capitan was similar in size and extent compared with other rockfalls throughout the park, though it is not typical that that there were victims. It has been 18 years since the last rockfall-related fatality in Yosemite National Park. In that incident, rock climber Peter Terbush was killed by a rockfall from Glacier Point June 13 1999.

‘There have now been 16 fatalities and more than 100 injuries from rockfalls since park records began in 1857.

The park has not yet commented on Thursday’s catastrophe but advised that Northside Drive was closed as a result of it.

‘There have been three subsequent enormous rock falls and this rescuer is in tremendous peril,’ he said, immediately after the first one.