Hillary Clinton and Joe Biden both chided President Trump for wanting to get Americans back to work more hastily than medical experts would recommend amid the coronavirus outbreak.

‘It’s incredible that this has to be said: Letting thousands of people needlessly suffer and die is wrong. It’s also not a recipe for rescuing the economy,’ Clinton tweeted Tuesday.

She followed that up with: ‘Please do not take medical advice from a man who looked directly at a solar eclipse.’

Biden made a similar point during an appearance on ‘The View,’ speaking to the co-hosts from his home in Wilmington, Delaware.

‘And I don’t agree with the notion that somehow that it’s OK to let people die … to make sure the economy is there for our kids,’ said Biden, who’s on track to become the 2020 Democratic nominee.

Hillary Clinton attacked President Trump on Twitter Tuesday, criticizing his temptation to reopen parts of the economy before the threat of the coronavirus spreading has been abated

Hillary Clinton dashed off two tweets, critiquing President Trump for wanting to reopen business in the U.S. sooner than later 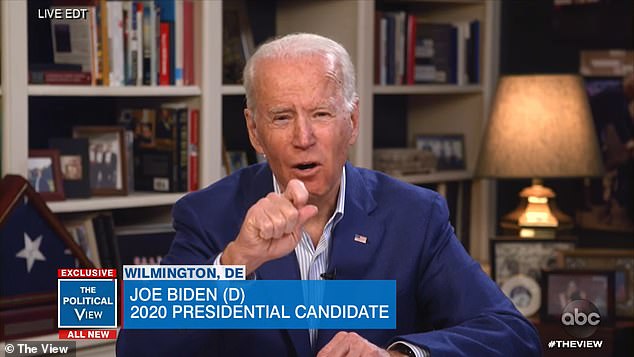 Biden also floated that Americans should not be getting their medical advice from the president.

‘And I would respectfully suggest you should have Dr. Fauci on a lot more than the president,’ Biden said on ‘The View.’

Trump has already grown tired of his administration’s response to the pandemic – closing American businesses and schools for ’15 days to slow the spread.’

And he’s floated reopening parts of the economy in places that aren’t being hit as hard as New York City, for example.

‘We can’t let the cure be worse than the problem,’ he said at the White House press briefing Monday.

But even members of his own party have complained about those plans.

‘There will be no normally functioning economy if our hospitals are overwhelmed and thousands of Americans of all ages, including our doctors and nurses, lay dying because we have failed to do what’s necessary to stop the virus,’ tweeted Rep. Liz Cheney, the third most powerful House Republican and the daughter of the former vice president. 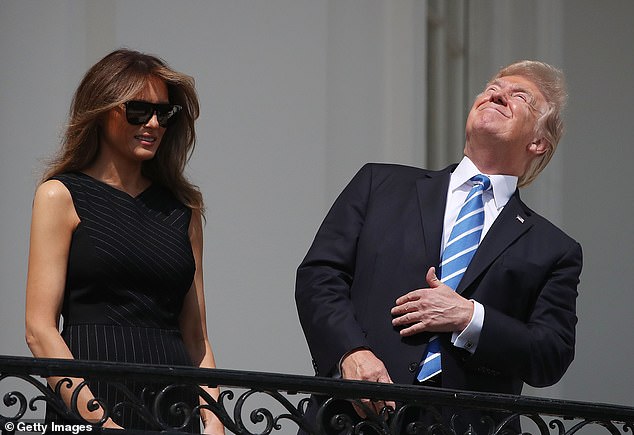 Hillary Clinton was referencing this moment, when President Trump (right) glanced up to look at the sun during solar eclipse on August 21, 2017

On ‘The View’ Biden was asked about the president saying that ‘the cure’ – halting economic activity across the country and having people remain at home – shouldn’t be more severe than the disease itself.

‘We know what has to be done – we have to flatten that curve,’ Biden continued.

‘And we’ve got to make sure that once in fact we have this under control it doesn’t come back,’ Biden added. ‘So we should be focusing on is getting all the help necessary.’

The former vice president said the president should be focusing on ‘surging’ data, equipment and testing capabilities, to get medical professionals what they need all around the country.

Biden has been trying to figure out the right response to the coronavirus crisis as he – like the majority of Americans – is stuck at home and away from the campaign trail.

This week marked the first week he was able to broadcast from his Wilmington residence.

He told Whoopi Goldberg and the other co-hosts that he’s keeping a full schedule.

Biden said he was also in touch with Congressional leaders – as the Senate looks to pass yet another stimulus bill.