Clinton Foundation is back: Sting, Shaggy and millionaires party for Bill and Hillary

The Clintons partied like it was 2015 on Thursday night, hosting a $100,000-a-table star-studded gala designed to relaunch their troubled family charity.

Sting and Shaggy performed together on stage, Jon Bon Jovi introduced Bill and the audience included millionaires and Hillary super-fans who got in line for selfies.

On offer at a post-dinner auction was a trip to the Caribbean with Bill – or chardonnay with Hillary.

It was an echo of the charity’s golden years, before an intense focus on it during Hillary’s losing run for the presidency, and now an active FBI investigation into whether it was part of a pay-to-play scheme while she was secretary of state, made it a lightning rod for controversy.

But Bill, Hillary and Chelsea were defiant as they fronted the event, with Hillary telling attendees: ‘You being here is really heartening to me.’

There were signs of the headwinds the trio face however, with the New York venue which hosted the event not being publicly disclosed, and no sign of photographs or videos of the celebrations on the three Clintons’ social media accounts.

Watching you: Shaggy and Sting were the star performance for the evening, with numbers from their new album and a reggae-tinged version of Every Step You Take 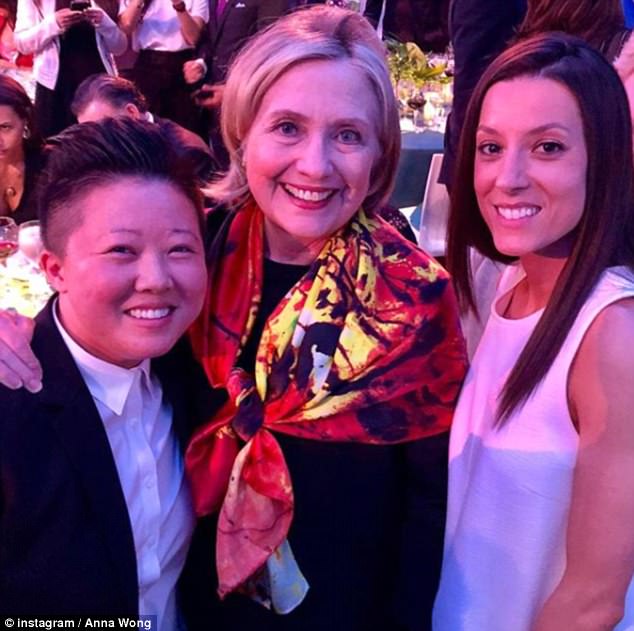 Selfie time: Fans lined up for photographs with Hillary and Bill Clinton at the 2018 Clinton Foundation Gala at a secret New York venue. The charity saw donations plunge by almost $50 million in 2016, the last year for which it has released financial details 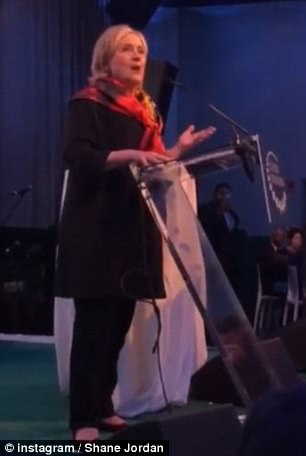 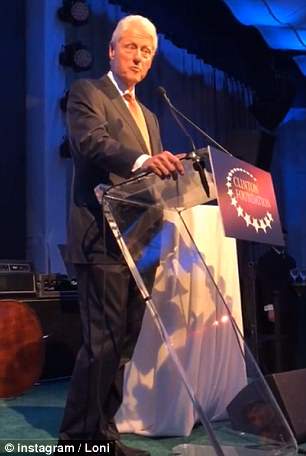 Keynote speakers: Hillary and Bill spoke after a performance by Shaggy and Sting, who are releasing an album together. Their family charity is being probed by the FBI and donations have plunged 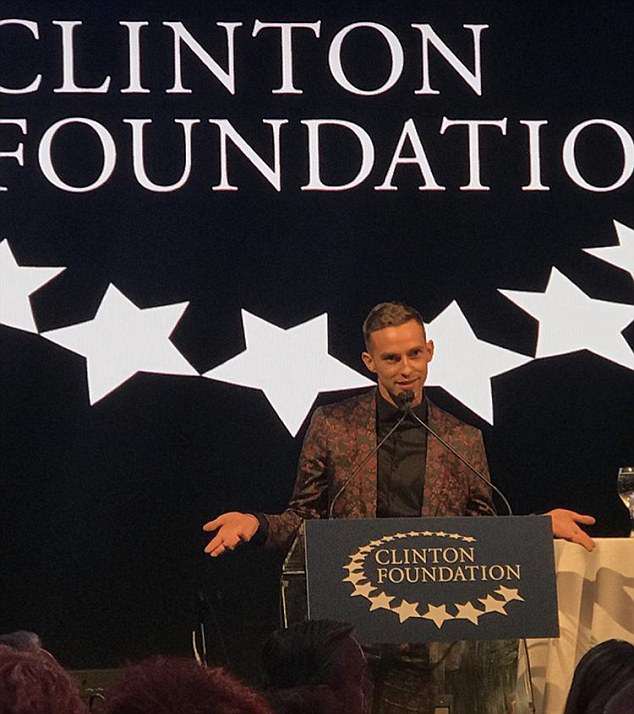 Breakout star: The Clinton Foundation has found a new supporter in Adam Rippon, the U.S. figure skater and Dancing With The Stars champion, who used his social media to promote the event 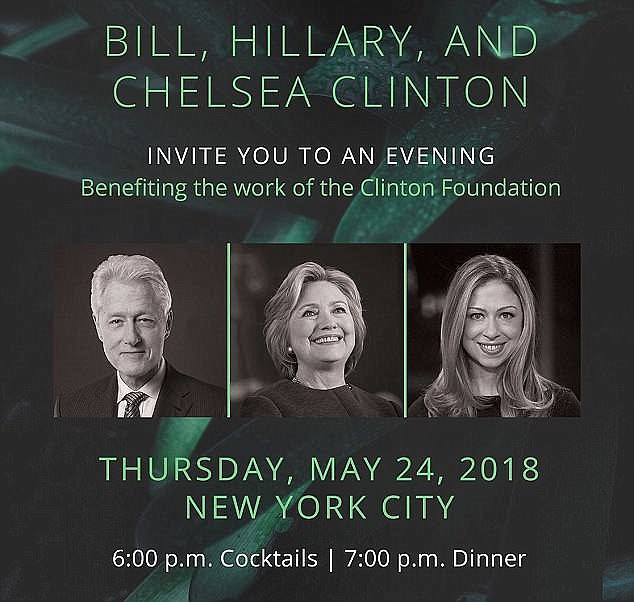 How it was promoted: The Clinton Foundation kept the venue secret, reflecting the headwinds it finds itself in while it is under FBI investigation and has seen donations plunge 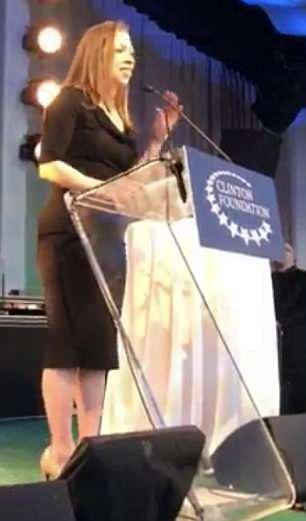 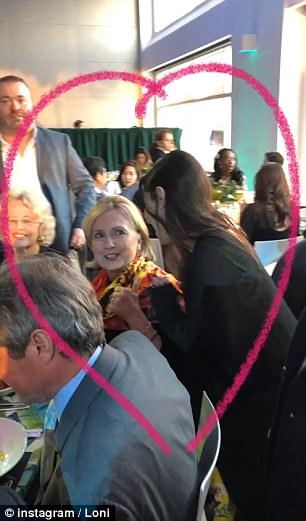 Controversial figure: Clinton aides had been revealed earlier this year to refer to the Foundation as Chelsea’s ‘nest egg’ but she was warmly received at the dinner. It is unclear if her husband, Marc Mezvinsky, was present. What was clear, however, was what Clinton fans feel about Hillary (right)

Previous events had been held at high-profile and publicly named venues such as the Plaza, with hosts named well in advance.

This time the introductions were by Adam Rippon, the breakout figure skating star of the Winter Olympics, and by Bon Jovi, a long time friend of the Clintons.

Rippon – who brought his mom Kelly – had previously promoted a competition to win two tickets for the event, and introduced Hillary to the stage as ‘former New York senator and secretary of state’, not mentioning her 2016 run.

The 2016 loser was wearing the elaborate scarf which has become her trademark look in recent weeks and has raised questions on social media over whether she is hiding aback brace.

Hillary praised the charity’s work, saying it was looking for ‘a smart way that brings people together rather than driving them apart’.

She praised Rippon for his ‘grace and charisma’ adding: ‘Then he won Dancing with the Stars!’

Her next line might have been more heartfelt: ‘You being here is really heartening to me.’

Also on stage was Chelsea Clinton, who is a board member but who faced accusations that the Foundation was known among her mom’s officials as her ‘nest egg’.

And Bill was introduced by Jon Bon Jovi, to a standing ovation from the audience. 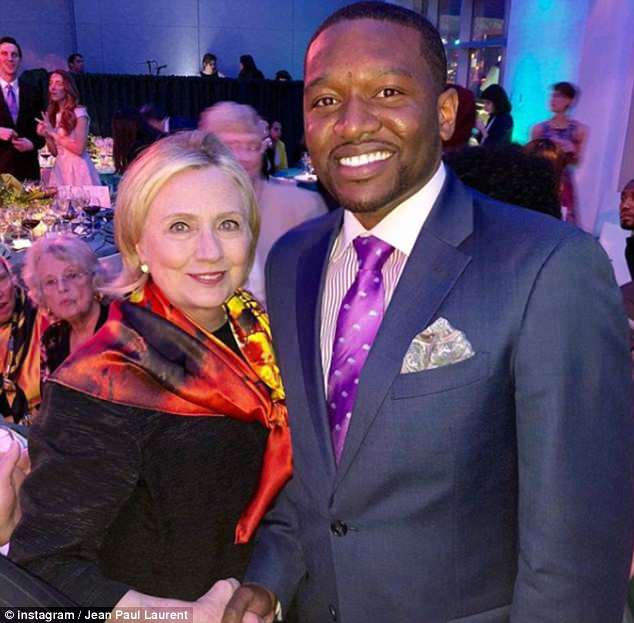 Still with her: Non-profit founder Jean Paul Laurent, a Haitian-American dental hygienist, was happy to show his support for the 2016 loser, who was in the large scarf which has recently become her trademark 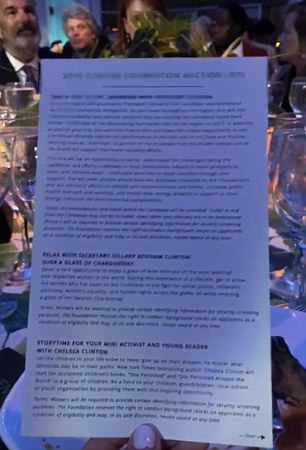 Cash for Clintons: Encounters with each of the Clinton family were on auction – but Jon Bon Jovi did not have to bid to be there as he introduced Bill Clinton, saying he was ‘number 42 but for us number one’ 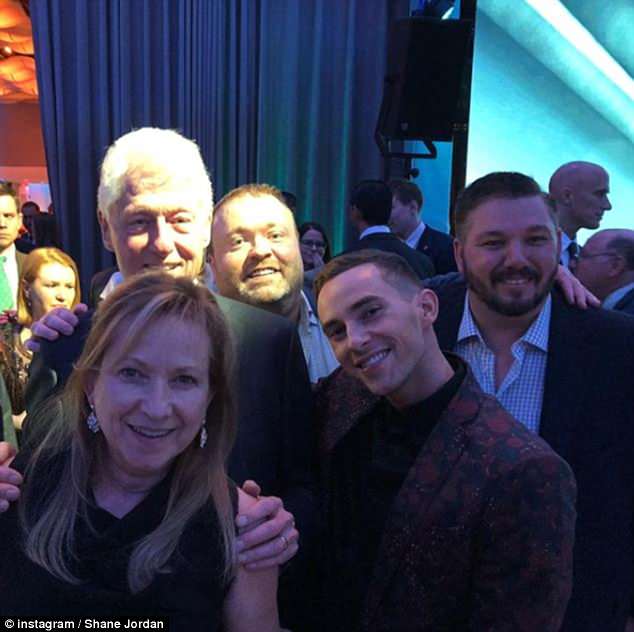 New team: Adam Rippon is now a prominent face for the Clinton Foundation and was praised by both Bill and Hillary for winning Dancing With The Stars 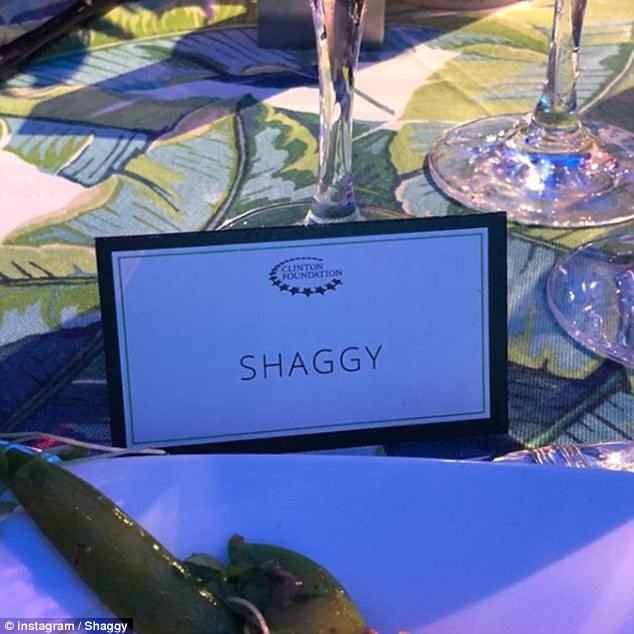 Needs no further introduction: Shaggy went by his stage name for the dinner

He recounted a trip with Sting to a place ‘with no cameras, no publicity’ where people had ‘an uncertain future’ and had ‘never heard his music’.

He also said: ‘Thank you Adam Rippon, you inspired a while country. I think I told you this, but Hillary”s mother’s favorite television show was Dancing With The Stars so she thinks it’s a way bigger deal that you won that. I just thought it was cool.’

But he concentrated on thanking Hillary, saying: ‘I want to thank Hillary for being here and for her continued commitment to this endeavor.’

The speeches came after a performance by Shaggy and Sting, who have a joint album out, which included a reggae version of Every Breath You Take. One attendee wrote on social media that ‘Hillary loves reggae.’

And there was also a charity auction, with lots including time with each of the Clintons.

Attendees could bid to join Bill on a Clinton Foundation trip to the Carribean, touring what it said were ‘sustainable energy’ projects in the islands, and visit Puerto Rico to see reconstruction efforts after last year’s devastating hurricane.

The trip included the chance to see Lin-Manuel Miranda perform the title role in his hit Hamilton in Puerto Rico, which is scheduled to be next January.

Also on offer, was ‘chardonnay with Hillary Clinton. The program said: ‘Savor a rare opportunity to enjoy a glass of wine with one of the most admired and respected women in the world. Fly away with me: Gala-goers could bid for a trip to the Caribbean with Bill Clinton, including seeing Lin-Manuel Miranda play the title role in Hamilton in Puerto Rico 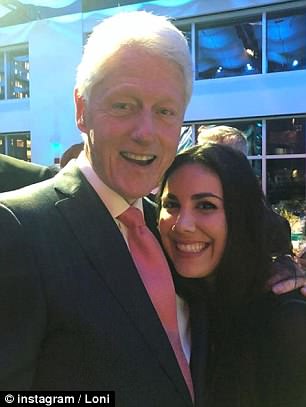 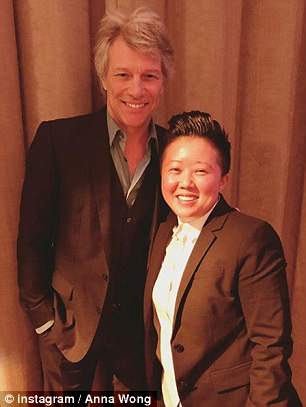 Selfie time: Attendees got to pose with Bill Clinton, and Jon Bon Jovi. It is unclear whether they paid more for pictures with the Clintons 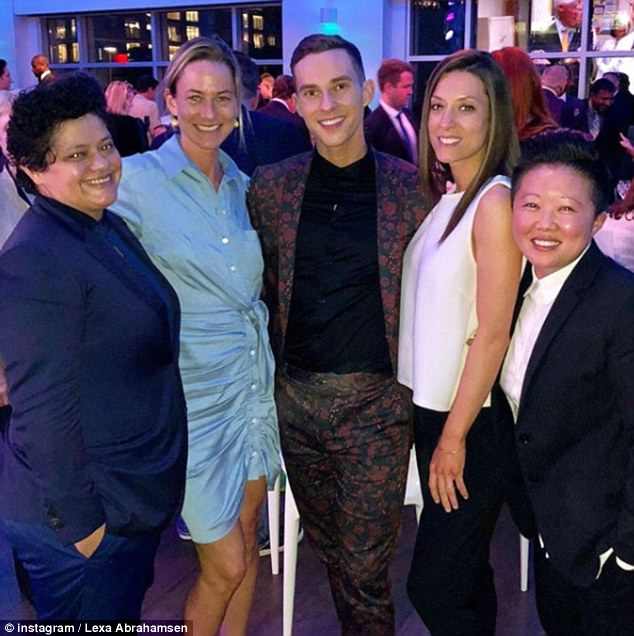 Big star: Adam Rippon – whose mom Kelly was his date for the gala – was a popular speaker and in demand for photographs Hopeful signs: The Clinton Foundation will be hoping that the praise it received from guests, who enjoyed tuna tartare with a radish and shaved apple salad –  will translate into donation after the huge hit it took in its most recent financial returns for 2016 – losing almost $50 million in donations compared to the previous year

‘During this experience of a lifetime, get to know the woman who has been on the frontlines of the fight for social justice, children’s advocacy, women’s equality, and human rights across the globe, all while enjoying a glass of her favorite Chardonnay.’

That prompted an auction battle with the auctioneer saying: ‘This is more drama than Trump v Mueller.’

And there was also a lot from Chelsea: ‘Storytime for your mini activist and young reader with Chelsea Clinton.’

Other lots included VIP tickets to see Sir Elton John in Madison Square Gardens later this year, including a backstage meet-and-greet; a New York Fashion Week experience which included a free Alice + Olivia dress; and a tasting at Red Rooster, a trendy Harlem New York, restaurant close to where Bill had his office when he first left government.

Among the attendees were Jamie Roth, 38, a race horse breeder whose father Larry sold his Marchon eyewear company for $735 million; Loni Edwards, who runs an animal celebrity management company; and Jean Paul Laurent, a Haitian-American who founded Unspoken Smiles, a non-profit encouraging dental hygiene in his native country.

The event came after a push earlier in the day by the Clintons to promote their charity, with a New York meeting and a launch for its annual report.

Its figures however suggested that its future continues to face issues. In the course of the 2016 election, it had promised to stop accepting foreign donations if she had won.

But donations had plunged anyway, figures published on Thursday disclosed.

The charity also came under intense pressure over donations of up to $250,000 it had received from Harvey Weinstein, which it decided last October it would keep.