A shop assistant who ran down and killed a pensioner while driving without a valid licence has been spared jail.

After colliding with the elderly widow Stanworth shouted ‘this is going to finish me…I am not in a good place.’

Stanworth, from Padiham near Burnley, had no valid licence to drive her car after she failed to reapply for one following a six month road ban.

At Preston Crown Court she pleaded guilty to causing death by careless driving and driving without a valid licence.

She was given a six month jail term suspended for two years, banned from driving for 18 months and ordered to complete 80 hours unpaid work.

The court heard how she collided with Mrs Sharples, who was on her way home from visiting the bank.

As she made her way back across the car park, Stanworth’s front bumper hit her, knocking her to the ground.

David Tempkin, for the prosecution, said: ‘She fell and landed on her back. A number of witnesses saw what happened and as she lay motionless the defendant continued her travel and both front tyres went over the victim, turning her body and bringing her forward.

‘This manoeuvre required her to accelerate. The defendant continued for a further two minutes before reaching a standstill. She got out of her car and looked shocked. One witness said she was screaming.

‘Another witness heard her shout: “Why did she walk out in front of me, this is going to finish me, I am not in a good place”.

‘The victim sustained multiple injuries to several of her organs and died five days later. The defendant provided a negative breath test at the scene and told police she hadn’t seen the victim.’ 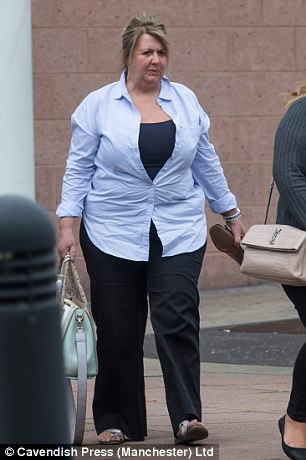 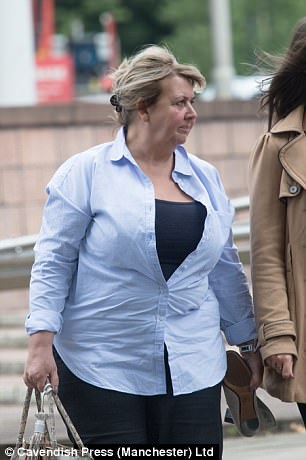 Stanworth was given a six month jail term suspended for two years, banned from driving for 18 months and ordered to complete 80 hours unpaid work

He continued: ‘A collision report concluded that the defendant was driving at about 5mph and there were no defects with the vehicle.

‘Police then discovered she was in possession of an expired license and the defendant had been convicted of a number of driving related offences.

‘Her licence had been revoked in 2009 and she continued to drive and received points and was disqualified on February 10 2016 under the totting up procedure. The defendant was required to reapply for a driving license but failed to do so.

‘The vehicle was owned by her daughter and she was a named driver but insurance were not aware of her previous convictions.’ 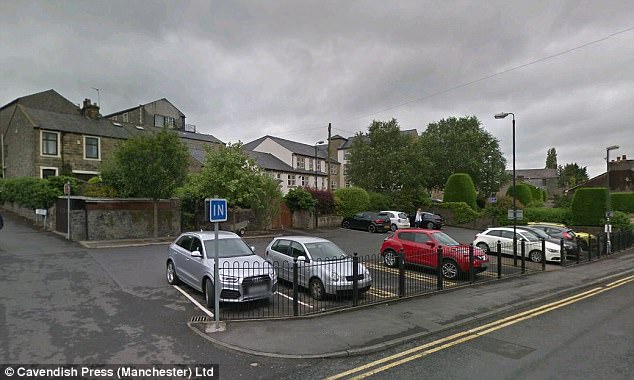 In a police interview Stanworth denied being distracted and said the victim had stepped in front of her vehicle.

In a statement Mrs Sharples’ son, Andrew Wadsworth, said: ‘My mother was a very active and healthy woman who survived breast cancer and I can only express my shock and horror at seeing her injured and the trauma and shock of losing her on Christmas Day.

‘I’ve been trying to cope with these events and sorting out my mum’s things and coming to terms with knowing she had died from being hit by a car.’

Philip Holden, defending, said: ‘She has shown genuine remorse. She has not driven since the accident as she cannot face getting behind the wheel of a car. It has affected her health greatly and she suffers depression and anxiety and when sleeping she gets flashbacks of the incident.’

Sentencing Stanworth, Judge Mark Brown told her: ‘This is on any view a very sad and tragic case. You drove your car looking for a space and your vehicle collided with her and you then drove over her body. I have no doubt this has all happened within the blink of an eye.

‘It is apparent that you were very distressed and she was seriously injured and she tragically died some five days later. The position is aggravated because you didn’t have a licence and the insurance certificate was probably invalid.

‘This is a really tragic case. Mrs Sharples was in good health and had an active lifestyle. She enjoyed life and was in no doubt hoping to have further years of life ahead of her. The trauma of Mr Wadsworth of losing his mother had been particularly profound.

‘It is clear that you are extremely distressed at what happened to Mrs Sharples and it has had an impact on your own health.

‘I hope you have learned a profound lesson.’