Clive Myrie is a brave man, but play him a bit of Madam Butterfly and he dissolves. ‘I’m in tears whenever I hear it,’ says the man who fearlessly presented the news from a rooftop in Kyiv earlier this year, even as the Russians were advancing on the Ukrainian capital.

The sounds of war don’t seem to faze him, but listening to a Japanese woman pining for her lost American man he becomes a hot mess. ‘You know it ain’t gonna end well, but she’s singing about love.’

There’s a faraway look in the eye of this 57-year-old, who’s been with his wife Catherine for three decades. ‘Music has always been a really important part of my life, it has the power to move me deeply,’ he says.

And suddenly I’m seeing a different side to Clive Myrie, who donned a flak jacket live on air in order to keep on reporting as the bombardment raged, and who had to flee to a bunker when his base was shaken by nearby missile fire.

Clive Myrie (pictured) fearlessly presented the news from a rooftop in Kyiv earlier this year. But the UK-based war correspondent reveals that classic music can leave him in a mess

Away from the war zones, of course, he moonlights as the interrogator on Mastermind, the sternest quiz on television. But is he trying to say he’s actually a secret romantic?

‘Yeah, I am really,’ he says, screwing up his face and laughing. So why the grimace?

His voice is so loud, deep and distinctive that people on nearby tables at the West End hotel where we meet turn their heads to see him sitting here, looking muscular in a simple grey T-shirt and blue jeans. There’s an attractive warmth about him, as he laughs again. 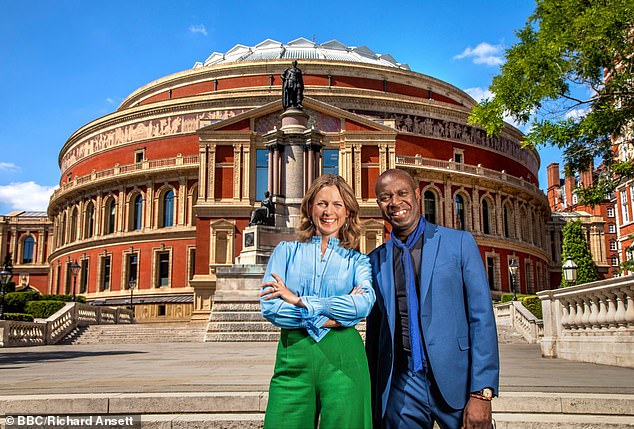 Clive and Katie Derham (pictured) will be hosting BBC Proms this year. Clive looking forward to the Ukrainian Freedom Orchestra, which will be broadcast

‘I’m joking, none of that reputation stuff matters. I like art of any kind that’s moving and takes you to a different place.’

And that sensitive, music loving side to his character is one of the reasons Myrie is hosting the BBC Proms this year. One Prom he’s been looking forward to is that involving the Ukrainian Freedom Orchestra, which will be broadcast tomorrow night.

‘It’s a fascinating project put together in the wake of the conflict,’ he says. ‘It’s made up of musicians who are refugees, many of them soldiers.  It will be an emotional moment for the Albert Hall and for people watching.’

Will the performance, including music by a Ukrainian composer, bring back memories of those he left behind?

As a presenter, people have to want you in their front room every night. You’re an invited guest

‘Yes, I will think about the people I came to know back there, still having to deal with it all. But also the Russians caught up in it who do not support the endeavour.’

He clearly feels it deeply. He appeared to shed a tear as he stood on that rooftop in Kyiv in February and told viewers Russia had invaded.

That’s highly unusual for a newsreader and got a massive amount of attention, but he tried to play it down.

‘What can I say? It was windy on the roof. We were high up. The wind cut across my eye and blew something out. And it had been an emotional day.’

He had flown in to Kyiv on a £29.99 Ryanair flight the day before, finding the city calm. ‘I didn’t expect Putin to invade, I didn’t see what he could hope to gain from it.’ 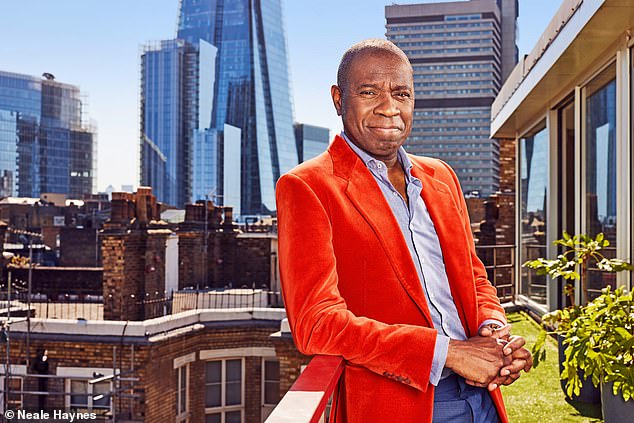 These days Clive, pictured, is among the BBC’s highest-paid stars, with a salary up to £259,999, not including Mastermind

But soon Russian tanks were coming and men, women and children were dying in air strikes. So was it the wind or the emotion that caused the tear?

‘I think it was a combination of the two.’

Clive is no stranger to war: he was embedded with the Royal Marines during the 2003 invasion of Iraq and has covered many other conflicts since he joined the BBC graduate training scheme in 1987. But it was only after he became a newsreader on the News At Six and Ten a few years ago that people began to take more notice of him.

‘As a presenter you’re scrutinised a bit more. People have to want you in their front room every night. You’re an invited guest.’ 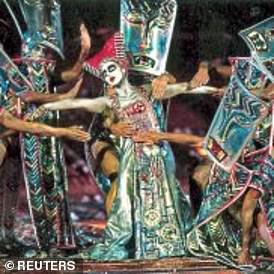 Clive’s life, and he enjoys attending concerts. ‘We’re going to the Verona Opera Festival in northern Italy, as we did every year before Covid,’ he says.

‘The minimum is me and the missus, but usually a couple of close friends come too. We stay in the same hotel, eat at the same restaurants.

‘I can completely relax. Verona is beautiful, and the weather is glorious.’

Except when it isn’t. ‘You get thunderstorms sometimes so everyone rushes off the stage [in the Roman amphitheatre], they don’t want to get their instruments wet.

‘Then you’re huddling under a canopy drinking a glass of bubbles and Roman Abramovich is standing there, because he’s been in the audience. So it’s intimate.

‘A great place to chill out.’ Does he play a musical instrument himself?

‘Not any more. I used to play the violin and the trumpet in the town orchestra when I was a kid, I toured Europe with them, but for some reason I stopped as soon as I went to university.’

Then he started to appear on shows like Richard Osman’s House Of Games and Have I Got News For You?, while his powerful reports from inside hospitals during the pandemic revealed the pressure everyone in the NHS was under.

He was calm and full of authority, unafraid of showing emotion, which made him part of a new breed that includes the acclaimed international correspondent Lyse Doucet, who also reported magnificently from Ukraine.

But some viewers were alarmed to see him there. ‘People forgot what I had done before and were like, ‘Oh my God, Clive, get off the roof! What are you doing there?’, and saying to the BBC, ‘Why are you sending him out there?’ They were thinking, ‘What’s the guy from Mastermind doing in Ukraine?’ It’s like Magnus Magnusson covering the fall of Saigon!’

So was he scared? ‘You are prepared, but you’re also scared. You’ve topped up your hostile environment training, you can tell the difference between an incoming shell and an outgoing shell, you know how to deal with troops from a foreign army waving guns, but at the same time you’re wary.

‘You know a missile could be fired from Russian soil and land anywhere. There is an element of hypertension and stress. But I like to think I know what I’m doing.’

Did he have a choice? ‘Yes. I know a lot of people who didn’t want to go. Some reporters. Some producers.’

Did his wife try to stop him? ‘No. I met Catherine after I’d become a foreign correspondent.

‘She knows that going is who I am. She’s as sanguine as a spouse can be about this kind of thing, because she knows I’m not an idiot doing rash things.’

Catherine was in publishing when the couple met in 1992, at the launch of a book about Swiss cheese. They live in north London and she now works as an upholsterer and furniture restorer.

It’s all a long way from war-torn Kyiv, and the day after the invasion the BBC asked if he or any of the crew wanted to go home.

‘I made it clear I wanted to stay but I said to Kate Peters, our bureau chief, who had been in Moscow before, ‘Look, you know the Russians, if they come in here, are they going to kill us?’ She said she didn’t think so. I said, ‘OK, that’s good enough for me.’

Clive grew up in Bolton, the son of a factory worker and a seamstress who’d both come to Britain from Jamaica shortly before his birth in 1964. ‘My chosen career was always journalism,’ he says.

‘Where did that come from? ‘Seeing Alan Whicker’s travel reporting on TV, opening up a world beyond Lancashire. 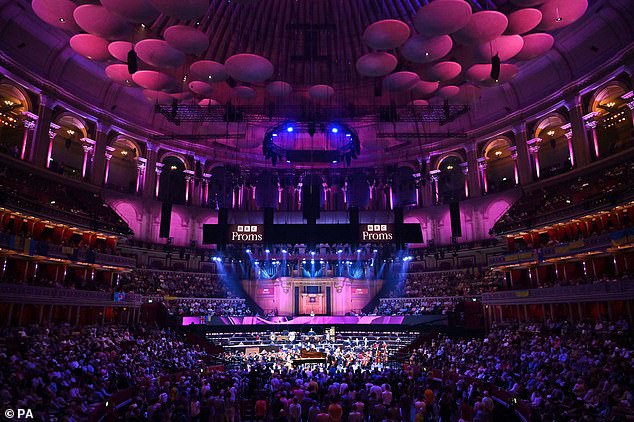 The Proms run until 10 September and are broadcast on BBC TV, Radio 3, BBC Sounds and iPlayer

‘Then I saw a guy who looked like me doing the same sort of thing: Trevor McDonald. That made me think I could do it too.’

There was a problem though. ‘I didn’t hear a single voice on the television that sounded like mine.’

He slips into Lancastrian vowels. ‘Bath, castle, grass? There was no way I thought I could ever get that kind of career with a flat northern accent.’

His voice changed when he went to Sussex University. ‘I was hearing a lot of posh and middle-class voices, so it was easy to become a product of my environment.’

Social mobility remains a big issue, he says. ‘You can have a lot of Asian people at the BBC or big newspaper groups, you can have certain black people moving up the ranks, but they would all tend to be middle class.

‘So the working class, particularly the male cohort, is underrepresented. I don’t know how you crack that, but we’re trying.’

These days he’s among the BBC’s highest-paid stars, with a salary up to £259,999, not including Mastermind. Does he mind his earnings being made public?

‘Well, that’s the way it is. We’re paid for by the licence fee. The public should know where that money goes.’

A lot of his colleagues are leaving though, such as Emily Maitlis and Dan Walker. ‘People make up their own minds about where their careers are going and what they feel they should be able to say in their working lives.

‘Have I had offers? I mean, maybe.’ He smiles. ‘But hey, I’m still at the Beeb, so clearly I’ve made the decision to stay.’

The public have only seen the newsy bits in the past. It’s nice to show the other side of my personality

What about those like Andrew Marr who leave because they want to voice their opinions free of BBC rules on impartiality? Clive is dismissive.

‘I’m not a news robot, I have opinions on Jacob Rees-Mogg for example, very strong opinions, but you’re never going to know them. I don’t know why I need to be the man in the pub telling everybody what he thinks.’

He does have one strong opinion, for anyone who sends him racist abuse.

‘It’s a tiny minority, but every now and again some idiot will send me a card with a monkey on the front or say, ‘You’re only getting to do this job because of positive discrimination.’ Blah blah blah, whatever. It used to wind me up. Now I think, ‘You’re just a sad loser.’

Some feared a backlash when he took over Mastermind, but the generosity and humour with which he asks the questions has given the show a huge lift. So millions of us have been slowly won over by Clive Myrie, who’s now in danger of becoming as popular as his heroes.

‘The public have only seen the newsy bits, wars and stuff in the past. It’s been nice over the last few years to show a little bit of that other side of my personality and what I’m interested in. And next up it’s the Proms…’