‘Do you think I give a stuff about you?’ Clive Palmer blasts Today’s Deborah Knight during fiery interview – as he claims his party could WIN the election

Clive Palmer has unleashed on Today host Deborah Knight during a wild rant about his wealth, fake news and his party’s surging popularity.

The billionaire’s United Australia Party is polling at five per cent of the primary vote just weeks out from the federal election, according to the latest Newspoll.

But Mr Palmer said his party was actually far more popular than that during a heated interview on Channel Nine’s Today on Monday morning.

‘That is just fake news of course. We are polling much higher than that. And there is 28 per cent of Australians that have yet to make their decision,’ he said.

Clive Palmer (pictured) has delivered an extraordinary rant during a television interview, admitting he was a ‘bad person’

Mr Palmer was asked to respond to criticism from Labor’s Anthony Albanese that he fell asleep in parliament and was often absent during his term as the MP for Fairfax from 2013 until 2016.

‘Why do you think we’re standing in 151 seats across this nation. Because we intend to win.

‘My wealth is $4,000 million. Do you think I give a stuff about what you personally think or anyone else… I care about this country.’

Knight asked Mr Palmer if he planned to follow through on his promise to pay the $7million he owes to workers at his failed Queensland Nickel company, prompting a testy reply.

‘You’re not listening. I said to you a minute ago that I will be paying $7million into a trust account of a solicitor who will disperse that money to the workers that make the claim,’ he said.

Mr Palmer refused to confirm if he had agreed to a preference deal with the Liberal Party and Prime Minister Scott Morrison.

He said Opposition Leader Bill Shorten was a liar, and Labor’s claims that they had only made brief, informal approaches to him about a preference deal were untrue. 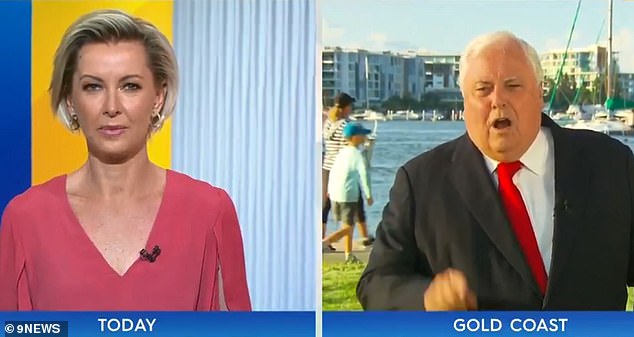 ‘[Mr Shorten] would love to have our preferences… They lie, lie, lie. That is all Anthony Albanese and Shorten can do. It is not much of an example for our children,’ Mr Palmer said.

Mr Palmer has spent about $60million on an extensive advertising campaign, bombarding potential voters with text messages and TV ads.