Brrrrrrritish Summer Time: The clocks spring forward tonight…but don’t be fooled into ditching your winter woollies just yet as cold front comes in

The sun’s arrived just in time for the clocks to spring forward to British Summer Time – but don’t be fooled into packing away your winter woollies just yet.

The mild conditions will be replaced by rain, gales, overnight frosts and even snow showers over the coming days.

High pressure is expected to bring balmy temperatures of up to 19C (66F) in southern England today, but a much chillier picture is forecast for the week ahead.

People played volleyball on Boscombe beach in Dorset yesterday as they enjoyed the mild weather. However, a much chillier picture is forecast for the week ahead

Daytime temperatures are set to plummet to between 8C and 9C (46-48F) in many areas, with successive weather fronts bringing in wet and windy weather.

Richard Miles, from the Met Office, said: ‘It is due to be much more unsettled over the coming week.

There will be showery conditions everywhere at some point and it is due to feel quite cold at night, with overnight temperatures falling to -2C (28F) or -3C (27F) by Tuesday.

‘On Tuesday night into Wednesday, there could be gales near the west coast with winds of at least 30mph.

‘By the middle of the week, temperatures could be cold enough for wintry showers of sleet or snow to feed in off the North Sea.’ 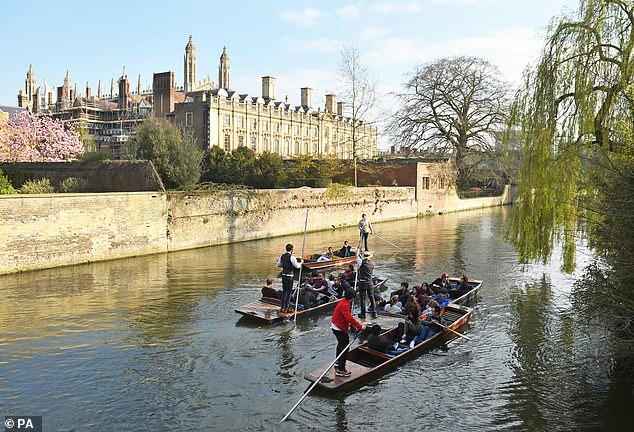 People punt along the River Cam in Cambridge yesterday in glorious spring weather. The temperature dip is due to begin today when a weather front sinks south, bringing patchy rain south to central England

The temperature dip is due to begin today when a weather front sinks south, bringing patchy rain south to central England.

Temperatures may struggle to exceed 11-12C (52-54F). Tomorrow will be dry but colder and cloudy, while Monday will start ‘cold, frosty and bright’.

The clocks will go forward on Sunday morning at 1am.