Clubbers ‘attack driver’ after he rammed nightclub at Giggs concert

Shocking footage has emerged from inside the club where 13 partygoers were injured after a car ploughed into the crowd during a concert by grime artist Giggs.

In the footage taken from inside Blake’s Nightclub in Gravesend, Kent, on Saturday night, clubbers appear to attack the driver of the silver Suzuki 4×4 which smashed into revellers at 11.47pm, shortly after a man was ‘refused entry by club bouncers’.

It is understood the disgruntled 21-year-old argued with the doormen and rammed his Suzuki Vitira through the marquee where smokers had congregated. 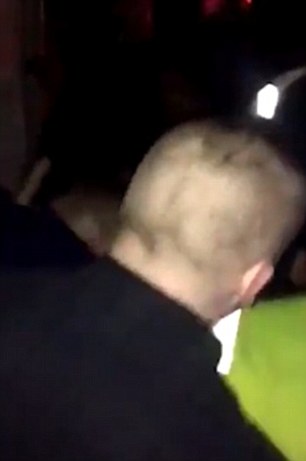 The driver was pulled from the car by clubbers, who detained him while police arrived. It is believed one of the injured, a young woman, suffered a broken pelvis.

Several of those hurt suffered broken bones but none of their injuries are described as life-threatening or life-changing.

Footage from the scene appears to show security guards in hi-vis jackets wrestling the driver to the floor as revellers shouted at and spat on at him.

Elena Napoliello, 18, from Gravesend, was enjoying a night out in Blake’s when the horror unfolded.

‘A friend and I were standing in front of the bar in the marquee, waiting for our coats to be taken to the cloakroom,’ she said. ‘All of a sudden, I saw multiple people falling backwards onto us and so I was confused as to what was happening. 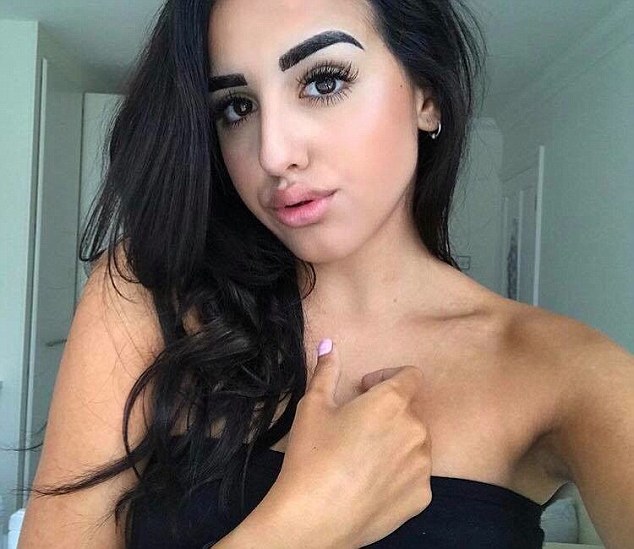 Elena Napoliello, 18, from Gravesend, was enjoying a night out in Blake’s when the horror unfolded 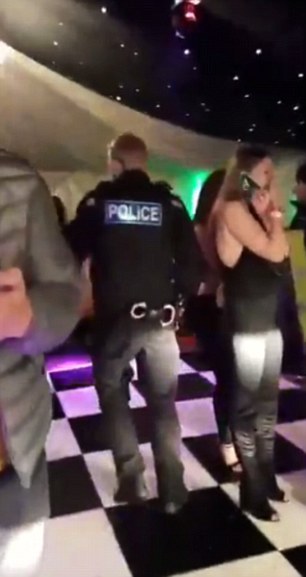 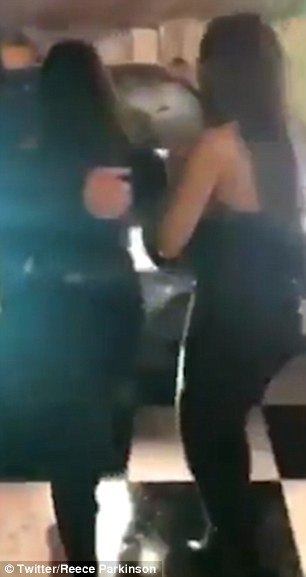 ‘Then, I saw the headlights of the car coming towards me and my friend and we got pushed backwards by one of our friends to get us into safety.

‘I could see everyone surrounding this 4×4, but there was nowhere for us to go, so we had to hide in the back of the marquee.

‘Everyone was shouting to ‘get down and hide’, which is what we were doing.

Miss Napoliello said revellers tried in vain to stop the vehicle, and the 21-year-old driver was surrounded in the aftermath by furious revellers. Videos shared on social media show he may have been dragged from the vehicle and attacked.

‘I didn’t see him very clearly because everyone was surrounding him.’

Other recordings show the car with its number plate hanging off and a smashed windscreen having crashed in the middle of the dancefloor. 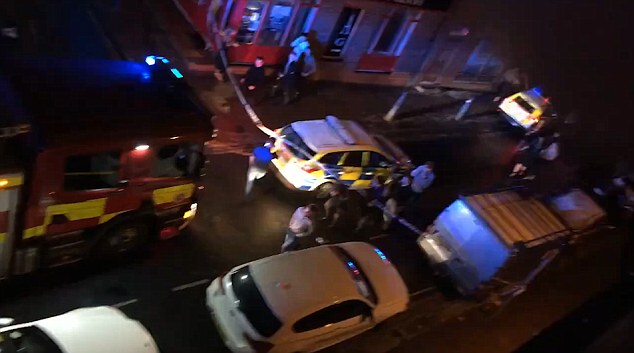 Partygoers  were injured after a car smashed into a Kent nightclub during a gig for grime artist Giggs,in an incident that was not terror-related

Sonny Powar said he saw two people get hit by the car before the driver was pulled from the vehicle.

‘(A man) drove his 4×4 into the tent we was all in and ran people over, it stopped at my feet so any further and I could have died then he reversed up and we all ran,’ he added.

‘We ripped the tent wall apart and got out and called the police. It was a complete mess of panic and chaos.’

‘Whilst we were doing so, I saw many injured people, someone limping along and another person with a bandage around their head.’

Richii Bunger said the driver initially failed to smash through a set of gates before reversing and making a second attempt, smashing into a marquee.

The 19-year-old said people panicked inside because of a lack of information, before being told the club had to close.

‘My friend was hit – he was clipped on his side – and he said to me if he’d looked or stepped back the tiniest bit more he would have been under the car,’ he said. ‘He also said he saw a girl get completely run over – straight underneath the car and everything.

‘Inside the club was madness, people were fighting and trying to figure out what’s going on and obviously it didn’t take long for word to spread.’ 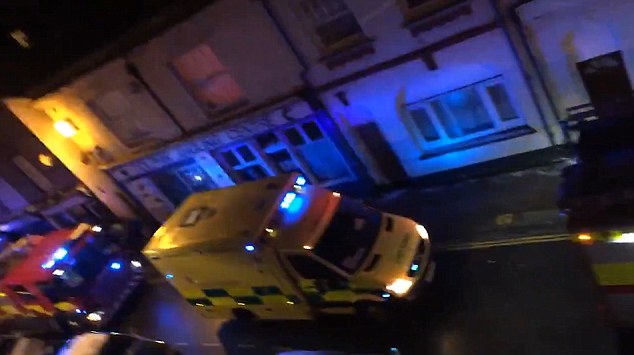 Shocked witnesses told how the silver 4×4 smashed into Blake’s Nightclub in Gravesend just after midnight, after a man was ‘refused entry by club bouncers’, having been kicked out earlier according to reports

Jade Keepin, 18, said: ‘I came out of the toilets in the shisha lounge and there was a car in the middle of the floor that security had surrounded.

‘Then I saw a person smash the back window of the car with his elbow and people began throwing stuff at the car. It was manic but security were making sure we were okay getting everyone into the main hall and safe.’

Kent Police said in a statement: ‘Kent police has arrested a man on suspicion of attempted murder after an incident in Gravesend where a number of people have been injured when a car drove into a nightclub building.

‘Officers were called to Green Street at 12.47am and are currently at the scene. The driver of the vehicle who is believed to have been asked to leave the nightclub earlier that evening following an altercation has been arrested on suspicion of attempted murder and is currently in custody.

‘A number of people have sustained injuries. This is not been being treated as a terror related incident.

The Serious Collision Investigation Unit along with Detectives from the Kent and Essex Serious Crime Directorate are investigating the incident and any witnesses are asked to call Kent Police on 101 quoting reference 17-1376.’

Kent Fire and Rescue Service said they had been called to assist Kent Police at an incident on Queen Street.

A spokeswoman said: ‘We were called at 11.53pm to assist Kent Police at an RTC (road traffic collision) in Queen Street, Gravesend.

Footage shows police, fire engines and ambulances at the scene on Queen Street.

BBC Radio 1Xtra DJ Reece Parkinson  posted footage of the aftermath on Twitter as revellers fled the dancefloor amid scenes of chaos. 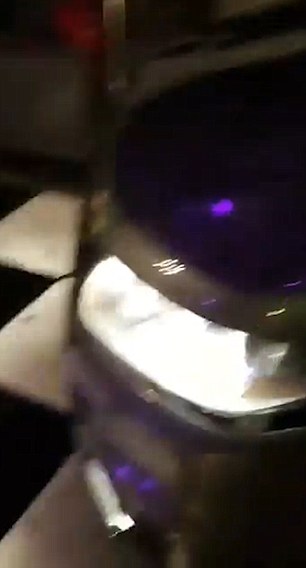 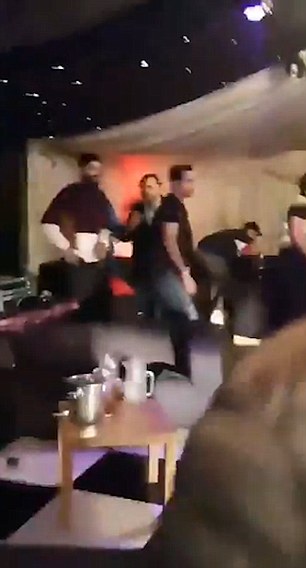 Blake’s nightclub yesterday issued a statement about the incident on their Facebook page, saying the venue’s staff has been ‘deeply saddened’ by the ‘unpredictable and selfish actions of one individual’.

‘Our thoughts and prayers go out to our guests and staff that were impacted by this incident,’ it added.

‘Although we are deeply saddened that injuries occurred, we are grateful that no one was fatally hurt.

‘We see our guests as family and we want to extend our concerns with them and the entire community of Gravesend, many of which bravely aided the staff and emergency services.’

One partygoer wrote on the Facebook page for the event: ‘I was right in front of the gate, only saw one security guard get hit before running for safety hope no one else got hurt’.

Another tweeted: ‘Never been so scared in my life. The car came inches from running me and my friends over’.

One witness told the Sun he was in the smoking area and saw the driver arguing with bouncers at the front of the club.

He said: ‘I saw all the security guards shouting. They were standing in front of the car to stop it moving but it reversed and really went for it.

‘One guard got the door open and was trying to pull him out or stop the car but it kept coming towards us.

‘Another security guard tried to jump out of the way but he went onto the bonnet and hit the windscreen.

‘I knew he wasn’t going to stop so I just got my girlfriend and we ran out of there.’

Detective Chief Inspector David Chewter of the Kent and Essex Serious Crime Directorate said: ‘This was a frightening experience for everyone involved and it is a miracle that nobody was killed.

‘At least 13 people were hurt but none of their injuries are described as life-threatening or life-changing. We believe there are likely to be further casualties who perhaps left the club during the panic and we would like to hear from them.

‘We would also encourage anyone who was present at the time of the incident or has photos or original video footage to call 0800 096 1011 or visit https://mipp.police.uk.

‘Our investigation is progressing well and I would like to thank everyone who has helped by providing statements or evidence so far, including the staff and management of Blake’s who we continue to work closely with.’