CNN has fired a commentator who made comments that critics described as a ‘dog whistle’ advocating the elimination of Israel.

During a speech at the United Nations on Wednesday, Marc Lamont Hill said accused the Israeli government of ‘normalizing settler colonialism’ and called for a ‘free Palestine from the river to the sea.’

On Thursday, a  a spokesperson for CNN told Fox News, ‘Marc Lamont Hill is no longer under contract with CNN.

Those calling out the television personality said his use of the phrase ‘from the river to the sea’ was problematic, due to its regular use by anti-Israel groups, including the terrorist organization known as Hamas.

Hill said the phrase ‘precedes Hamas by more than 50 years’ and ‘has a variety of meanings,’ calling the assertion that he was calling for the eradication of Israel ‘absurd on its face.’

When Hill used the phrase in question, the crowd erupted in applause.

Hill’s speech was described as an ‘especially obscene UN moment that reveals the true nature of the anti-Israel and anti-Jewish animus of the modern United Nations,’ by Anne Bayefsky, director of the Touro Institute on Human Rights and the Holocaust and president of Human Rights Voices/

‘Hill’s call at the United Nations for the destruction of the Jewish state was not some accident,’ Bayefsky added.

‘He didn’t misspeak. He was an invited guest. He was the only person invited to speak as “the” representative of “civil society.” When he ended his extraordinary tirade with “Give us a free Palestine from the river to the sea” his words were met by a round of applause. The only applause for any speaker.’

CNN has fired commentator Marc Lamont Hill, after he made comments that critics described as a ‘dog whistle’ advocating the elimination of Israel at a UN meeting on Wednesday (shown) 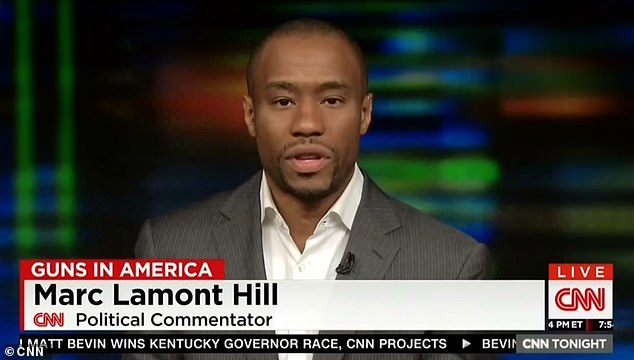 Before Hill’s profile was removed from the CNN site, it described the political commentator as ‘one of the leading intellectual voices in the country’

Before Hill’s profile was removed from the CNN site, it described the political commentator as ‘one of the leading intellectual voices in the country.’

He’s appeared on the cable network discussing a variety of issues, including guns in America.

At other points during his speech, Hill said he had just taken a flight from ‘Palestine’ and that he ‘was boycotting the Israeli water so I was unable to quench my thirst,’ as he poured himself a drink.

‘If we are standing in solidarity with the Palestinian people, we must recognize the right of an occupied people to defend itself,’ Hill said at another point during his talk, while comparing the Palestinian movement with the American civil-rights movement.

‘We must prioritize peace, but we must not romanticize or fetishize it.’ 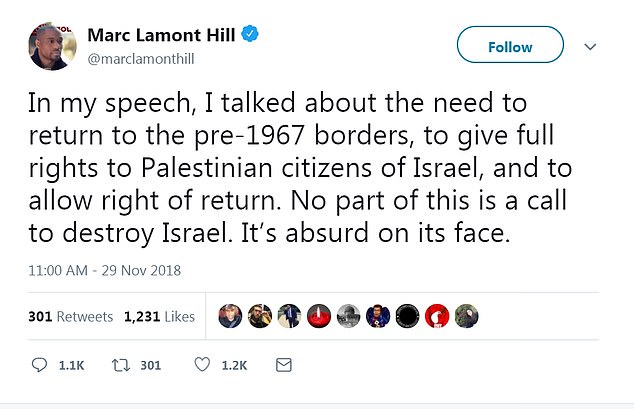 Hill wrote on Twitter on Thursday: ‘In my speech, I talked about the need to return to the pre-1967 borders, to give full rights to Palestinian citizens of Israel, and to allow right of return. No part of this is a call to destroy Israel. It’s absurd on its face.’

In response to the controversy, Hill wrote on Twitter on Thursday:

‘Yesterday, I gave a speech at the UN in which I critiqued Israel’s polices and practices toward Palestinians. It’s baffling how people are not responding to the critique, but instead responding to things I didn’t actually say.

‘In my speech, I talked about the need to return to the pre-1967 borders, to give full rights to Palestinian citizens of Israel, and to allow right of return. No part of this is a call to destroy Israel. It’s absurd on its face.

‘While I have my own beliefs about one vs two state solutions (I prefer one), it is not my job as an outsider to decide for Palestinians or Israelis. Regardless of the resolution, however, Palestinians cannot be denied freedom, self-determination, or human rights.

‘Unfortunately, we are in a moment where any critique of the Israeli government is called anti-Semitic. Any call for Palestinian freedom is seen as an attempt to diminish Israel freedom. This does not have to be, nor should it be, the case.

‘I concluded my remarks with a call to free Palestine from river to sea. This means that all areas of historic Palestine —e.g., West Bank, Gaza, Israel— must be spaces of freedom, safety, and peace for Palestinians.

‘Anyone who studies the region, or the history of Palestinian nationalism, knows that “river to sea” has been, and continues to be, a phrase used by many factions, ideologies, movements, and politicians.

‘The phrase dates back to at least the middle of the British Mandate and has never been the exclusive province of a particular ideological camp. The idea that this is a Hamas phrase is simply untrue.

‘It’s also ABSURD and illogical to suggest that a speech that explicitly called for redrawing borders and granting full citizenship for Palestinians IN Israel was also calling for its destruction. People either didn’t listen to the speech or they’re being dishonest.’ 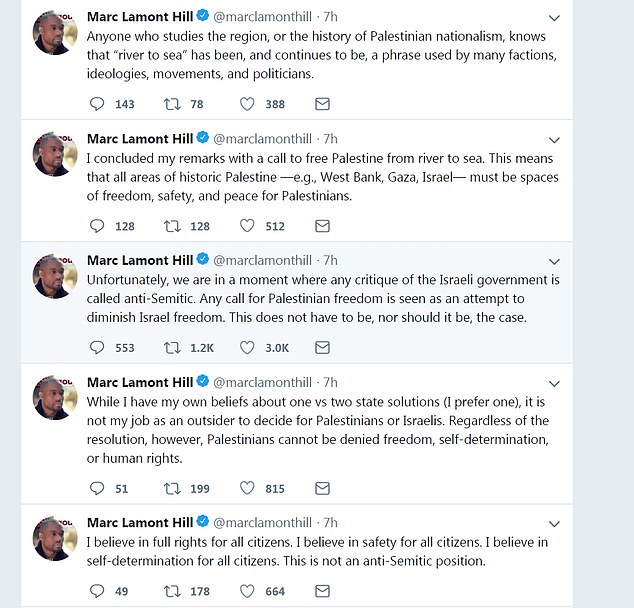 ‘Anyone who studies the region, or the history of Palestinian nationalism, knows that “river to sea” has been, and continues to be, a phrase used by many factions, ideologies, movements, and politicians,’ Hill tweeted on Thursday

‘I normally would ignore the current drama, but it’s actually important to me that I’m clear and understood. As a matter of principle.

‘I support Palestinian freedom. I support Palestinian self-determination. I am deeply critical of Israeli policy and practice. I do not support anti-Semitism, killing Jewish people, or any of the other things attributed to my speech. I have spent my life fighting these things.

‘My reference to “river to the sea” was not a call to destroy anything or anyone. It was a call for justice, both in Israel and in the West Bank/Gaza. The speech very clearly and specifically said those things. No amount of debate will change what I actually said or what I meant.

‘This isn’t a case of throwing rocks and hiding hands. I genuinely believe in the arguments and principles that I shared in the speech. I also genuinely want peace, freedom, and security for everyone. These are not competing ideals and values.’

Hill is a former professor at both Columbia University in New York and Atlanta’s Morehouse College.

He currently teaches media studies and and urban education at Temple University in Philadelphia.

Temple spokesperson Brandon Lausch said in a statement that Hill ‘does not represent Temple University and his views are his own. However, we acknowledge that he has a constitutionally protected right to express his opinion as a private citizen.’