The CNN host revealed his diagnosis on Tuesday saying he had been exposed in recent days to people who had subsequently tested positive for COVID-19.

Cuomo, who said he started suffering from a fever, chills and a shortness of breath, is now quarantining himself away from his wife and children in the basement of his home.

He said he will be filming his nightly CNN show from his basement.

‘I just found out that I am positive for coronavirus. I have been exposed to people in recent days who have subsequently tested positive and I had fever, chills and shortness of breath,’ Cuomo tweeted on Tuesday.

‘I just hope I didn’t give it to the kids and Cristina. That would make me feel worse than this illness. I am quarantined in my basement (which actually makes the rest of the family seem pleased!) I will do my shows from here. ‘We will all beat this by being smart and tough and united.’

His brother, Gov Cuomo, addressed the CNN anchor’s positive diagnosis during his Tuesday press conference in which he said the number of cases had increased by 9,298 to 75,795 and deaths had risen by 332 to 1,550.

Gov Cuomo said he last saw his brother in person about two weeks ago. It is not clear when Chris was exposed to the virus.

CNN anchor Chris Cuomo, pictured above working from home on Monday, has tested positive for coronavirus after suffering a fever, chills and shortness of breath His brother, Gov Cuomo, addressed the CNN anchor’s positive diagnosis during his Tuesday press conference in which he said the number of statewide cases had increased to more than 75,000 and the death toll rose to 1,550

Gov Cuomo said Chris was smart about social distancing but had still exposed himself to the virus as he used his brother’s case to urge essential workers to exercise caution amid the pandemic.

‘My brother Chris is positive for coronavirus. He is going to be fine, he’s young and in good shape, strong, not as strong as he thinks, but he will be fine,’ Gov Cuomo said.

‘But there’s a lesson in this. He’s an essential worker – a member of the press. He’s been out there. You go out there, the chance you get effected is very high.’

He said their mother had been in contact with Chris two weeks ago after she went to his home – and that he had advised his brother against having her stay there due to the risks for elderly and sick people.

‘My mother was at his house and I said that is a mistake. My mother is… older and she’s healthy but I said you can’t have mom at the house,’ Gov Cuomo said.

‘He said ‘no mom is lonely, she wants to be at the house. I feel bad she’s cooped up at the apartment’. I said I do too but you bring her to the house you expose her to a lot of things. You could expose mom to the virus.

‘We had a whole discussion. If he was exposed, chances are she may have been exposed. Then we’d be looking at a different situation than my brother sitting in his basement for two weeks.

‘It’s my family, your family – it’s all of our families.

‘This virus is that insidious. We have to keep that in mind… remember who is vulnerable here and protect them.’ 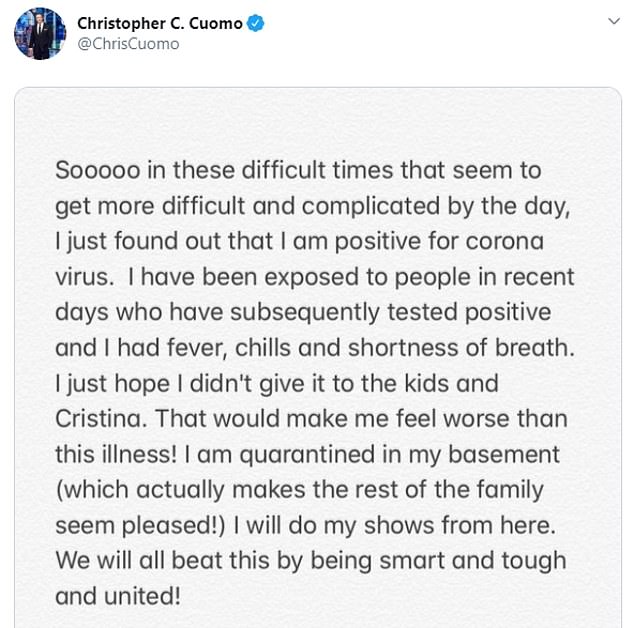 Cuomo, who said he started suffering from a fever, chills and a shortness of breath, is now quarantining himself away from his wife Cristina (above) and their children in the basement of his home

Gov Cuomo went on to describe his brother as his best friend and said he’s different to the ‘combative and argumentative’ person people see on TV.

He said his brother was a ‘really sweet, beautiful guy’.

Gov Cuomo made an appearance on his brother’s show, which he filmed from his basement, on Monday night.

Chris asked his brother whether he was considering a run for president given his approval ratings have increased over his handing of the coronavirus.

Gov Cuomo has said he has no plans to run for president.

New York remains the nation’s deadliest hot spot, with about 1,550 deaths statewide, the majority of them in New York City.

A Navy hospital ship with 1,000 beds that docked in New York on Monday was expected to begin accepting non-coronavirus patients on Tuesday.

The Billie Jean King USTA National Tennis Center is now also being transformed into a hospital.

On Monday, the governor pleaded for help from volunteer medical workers, and close to 80,000 former nurses, doctors and other professionals were already said to be stepping forward.

The city’s ambulances are responding to about 6,000 calls a day, or 50 percent more than average, authorities said. Fire Commissioner Daniel Nigro said a five-day stretch last week was the busiest in the history of the city’s EMS operation.