CNN’s president Jeff Zucker (above) may be considering a run for New York City mayor in 2021. ‘New York City is going to need a very strong mayor in the aftermath of this, and I always like a challenge,’ Zucker said Thursday

CNN’s president Jeff Zucker may be considering a run for New York City mayor in 2021.

Zucker, who has been CNN’s president since 2013, told The New York Times four years ago that he was considering a future in politics, saying at the time: ‘I would consider anything.’

On Thursday, Zucker appeared to hint at a run for public office once again when interviewed by the Times.

‘New York City is going to need a very strong mayor in the aftermath of this, and I always like a challenge,’ Zucker said.

In 2014, Zucker first hinted at a run for office during an interview with the New York Magazine.

‘I’d like to run a professional football team,’ he said at the time. ‘I’d love to run the USTA, be the sports editor of the New York Times. Would I consider a run for political office? Yes.’

For the last seven years, New York City has been led by Mayor Bill de Blasio, who attempted a run for president, and many New Yorkers have been yearning for new leadership.

Thousands have called for de Blasio to resign in the past few years. Some have called for his resignation as recent as two days ago amid the violent George Floyd protests in New York City.

‘Bill de Blasio is a horrible mayor who should resign in disgrace,’ one Twitter user wrote on Saturday.

‘In the past 2 months, over 20,000 New Yorkers died of a pandemic that was exacerbated by failed mayoral leadership. There are no plans of how NYC becomes functional again. NYC is in a catastrophic budget situation. And then tonight happens. Bill de Blasio needs to resign,’ another tweeted on Friday. 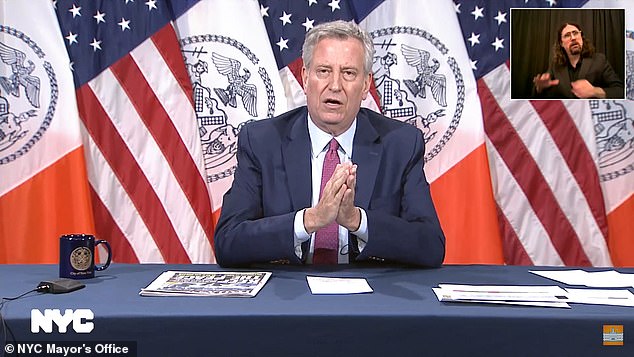 For the last seven years, New York City has been led by Mayor Bill de Blasio (pictured) and many New Yorkers have been yearning for new leadership

De Blasio has gone to war with his own cops once again as he demanded the officer who pointed his firearm at protesters ‘should have his gun and badge taken away’.

The mayor called for the NYPD officer to be fired after footage surfaced on social media of him pulling his handgun and pointing it at protesters near Manhattan’s Union Square Sunday night where activists gathered to demand justice over Floyd’s death.

‘It is not the place of an officer to pull a gun in the middle of a crowd, knowing that there are peaceful protesters in that crowd. That is unacceptable, that is dangerous,’ said de Blasio at his daily press briefing Monday.

‘That officer should have his gun and badge taken away today.’

This comes as the mayor’s approach to the protests has been called into question after he was forced to backtrack over his response to footage of officers ramming crowds with an SUV and it emerged his own daughter was arrested during a Manhattan protest.

In Sunday’s footage, the NYPD officer is seen drawing his handgun and pointing it at peaceful protesters while he quickly marches over the road toward them.

The crowds are heard screaming and run from the cop amid fears that he will open fire – on a night where people gathered to demand an end to police brutality. The cop then returns the firearm to its holster and appears to be led by another cop back to the other side of the road.

The incident took place at around 10pm Sunday night near 12th and Broadway outside the Strand, according to the social media post sharing the video.

De Blasio slammed the actions of the officer as ‘absolutely unacceptable’ and said there would be an immediate investigation ‘to determine the larger consequence.’

The NYPD has also said it is conducting an internal review into the incident. 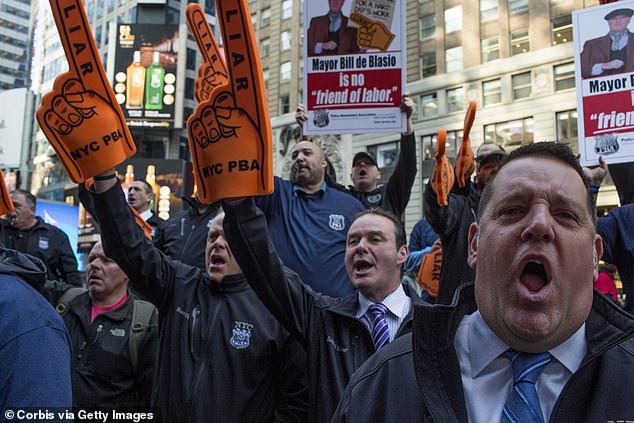 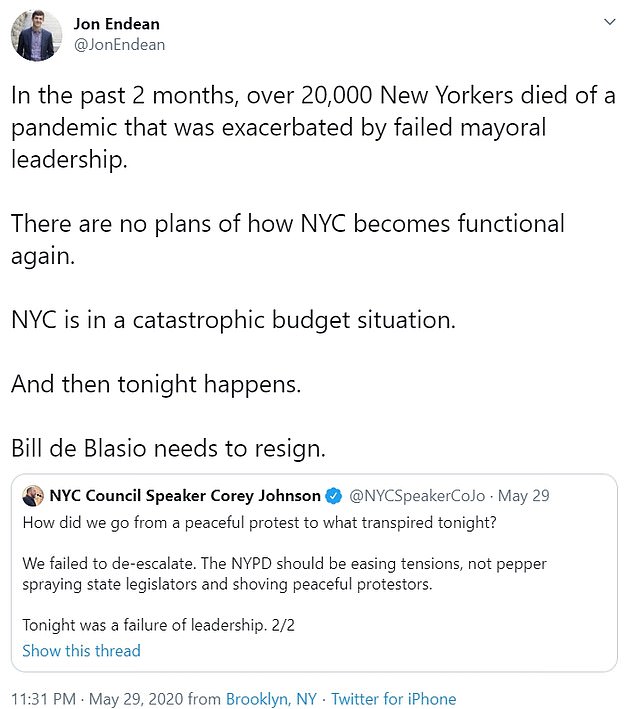 De Blasio adopted a harsher tone toward the action of officers Monday after he was blasted over his response to other footage showing cops appear to intentionally drive head-on into a group of protesters.

In aerial footage shot at a protest in Brooklyn Saturday, an NYPD cruiser is seen being blocked by protesters with a metal barricade, while some people hurled objects at the vehicle.

A second cruiser arrives and goes around the first and accelerates through the crowds pushing pedestrians out of the way.

The first car then rapidly accelerates ramming protesters out of the way.

De Blasio initially defended the actions of the officers saying on Saturday that the officers acted while under attack.

‘It is inappropriate for protesters to surround a police vehicle and threaten police officers,’ he said.

‘That’s wrong on its face and that hasn’t happened in the history of protests in this city.’

But de Blasio faced a backlash over his comments, with many pointing out that the cop cars were at no point surrounded by protesters with no activists seen behind one of the cars.

‘Your comments tonight were unacceptable,’ Ocasio-Cortez wrote on Twitter Sunday.

‘Defending and making excuses for NYPD running SUVs into crowds was wrong. Make it right. De-escalate.’

The mayor backpedaled on his comments Monday saying the incident was ‘not acceptable’ and that there are some cops ‘who do not belong on this job’.

He explained: ‘I want to take a step back and talk about a very troubling video from the night before last of two police cars moving through a crowd. That was so troubling to the people of this city.’

He said he had spoken when the incident immediately occurred but admitted there is no situation where the actions of the cops would be acceptable.

‘There is no situation where a police vehicle should drive into a crowd of protesters or New Yorkers of any kind. It is dangerous, it is unacceptable,’ de Blasio said.