Christopher Paul Hasson, the US Coast Guard officer accused of stockpiling guns and compiling a hit list of prominent Democrats and TV journalists has pleaded not guilty to drug and firearms charges

The US Coast Guard officer accused of stockpiling guns and compiling a hit list of prominent Democrats and TV journalists has pleaded not guilty to drug and firearms charges.

Public defender Liz Oyer didn’t ask for Hasson to be freed on bond and declined to comment after the hearing.

Federal prosecutors have said Hasson is a self-described white nationalist and ‘domestic terrorist’ who ‘intends to murder innocent civilians on a scale rarely seen in this country’.

Hasson has been detained since his Feburary 15 arrest. He faces a maximum of 31 years in prison if convicted of all charges in his four-count indictment last month.

The former lieutenant answered several routine questions from a magistrate judge during Monday’s brief hearing at the federal courthouse in Greenbelt, Maryland.

Prosecutors said Hasson has espoused extremist views for years and drafted an email in which he said he was ‘dreaming of a way to kill almost every last person on the earth.’ 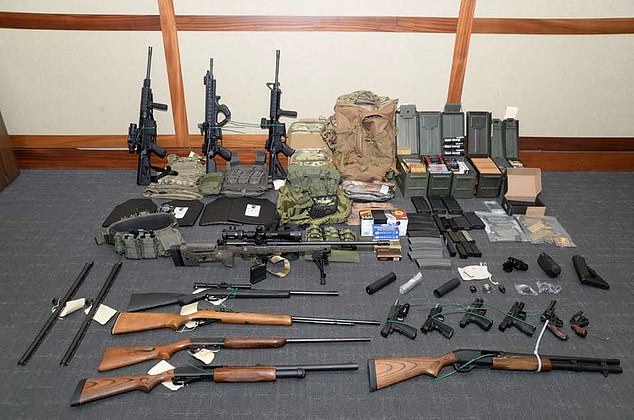 Federal agents seized 15 firearms – including several long-guns and rifles – and more than 1,000 rounds of ammunition during a raid on his cramped basement apartment last month 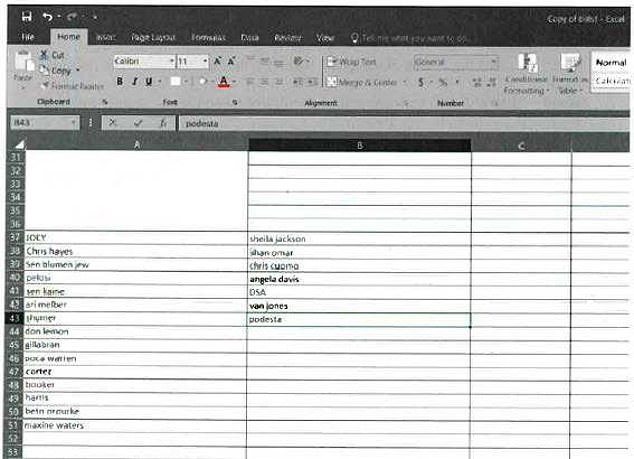 However, Hasson hasn’t been charged with any terrorism-related offenses. A different public defender has accused prosecutors of making inflammatory accusations against Hasson without providing evidence to back them up. 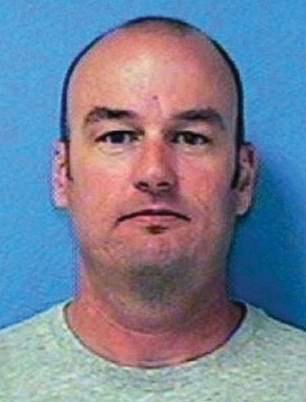 During a hearing last month, a different magistrate agreed to keep Hasson behind bars but said he was willing to revisit his decision if prosecutors didn’t bring more serious charges within two weeks.

Hasson, a former Marine, worked at Coast Guard headquarters in Washington on a program to acquire advanced new cutters for the agency.

The Coast Guard confirmed that Hasson was an active duty member at the time of his arrest on February 15, but that he no longer works there.

Court papers detail a June 2017 draft email in which Hasson wrote that he was ‘dreaming of a way to kill almost every last person on the earth’ and pondered how he might be able to acquire anthrax and toxins to create botulism or a deadly influenza.

In the same email, Hasson described an ‘interesting idea’ that included ‘biological attacks followed by attack on food supply’ as well as a bombing and sniper attacks, according to court documents filed by prosecutors.

In September 2017, Hasson sent himself a draft letter that he had written to a neo-Nazi leader and ‘identified himself as a White Nationalist for over 30 years’, according to court documents.

Hasson allegedly advocated for ‘focused violence in order to establish a white homeland’ in the letter.

Prosecutors claim that Hasson began the process of targeting specific victims and had compiled a list of prominent congressional Democrats, 2020 presidential candidates, activists, and media commentators.

In February 2018, he searched the internet for the ‘most liberal senators,’ as well as searching ‘do senators have ss (secret service) protection’ and ‘are supreme court justices protected,’ according to the court filing. 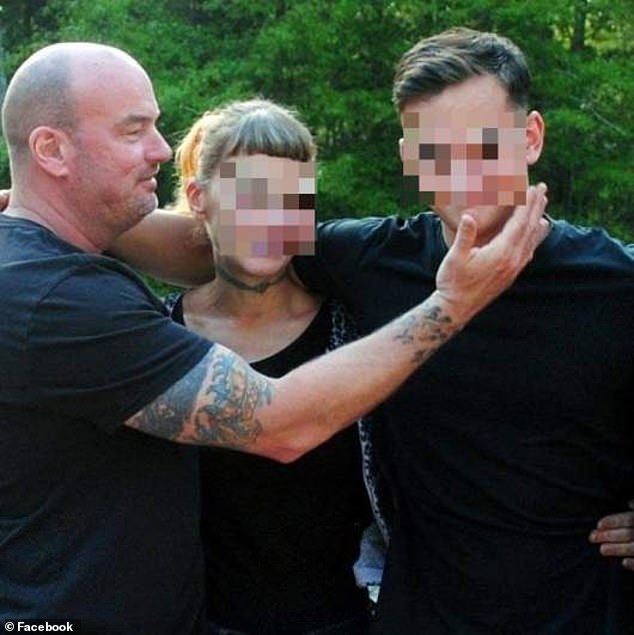 In September 2017, Hasson sent himself a draft letter that he had written to a neo-Nazi leader and ‘identified himself as a White Nationalist for over 30 years’, according to court documents 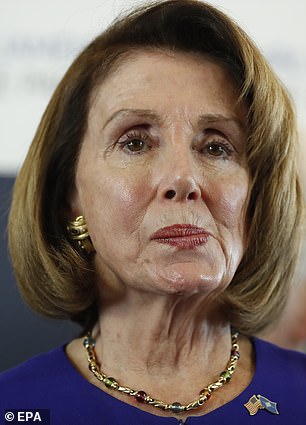 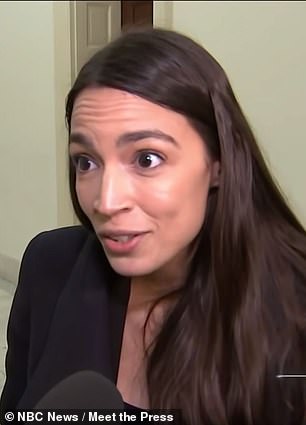 The list – created on a Microsoft Excel spreadsheet – also included mentions of John Podesta, who was Hillary Clinton’s campaign chairman, along with Reps Alexandria Ocasio-Cortez and Maxine Waters and former Rep Beto O’Rourke.

Hasson’s online search records show he searched for ‘joe Scarborough’ after reading media headlines that said the MSNBC Morning Joe host had referred to President Trump as ‘the worst ever’. He also searched ‘where is morning joe filmed’ and looked up where the TV host lived.

Prosecutors allege that Hasson visited thousands of websites that sold guns and researched military tactical manuals on improvised munitions over the last two years. He sometimes used his work computer to carry out these searches.

‘The defendant is a domestic terrorist, bent on committing acts dangerous to human life that are intended to affect governmental conduct,’ prosecutors wrote in court papers.

Hasson’s documents do not detail a specific planned date for an attack. However an investigation revealed he searched the Internet using phrases such as ‘best place in dc to see congress people’ and ‘are supreme court justices protected’. 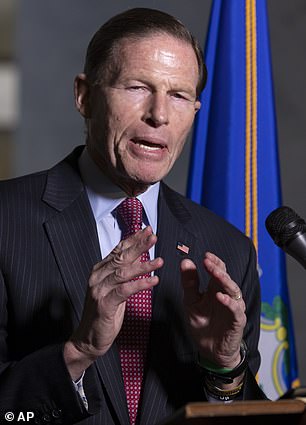 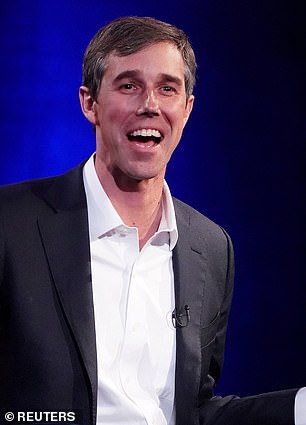 Officials with the US Attorney’s Office in Maryland detailed that Hasson had planned to unleash destruction and violence in public places and against individuals in court documents.

‘The defendant intends to murder innocent civilians on a scale rarely seen in this country,’ the court documents state.

It is not clear why federal agents began investigating him, but authorities said Hasson had harbored extremist views for years.

Breivik, a right-wing extremist, is serving a 21-year sentence for killing 77 people in a 2011 bomb and shooting rampage in Norway.

The manifesto outlined how Breivik orchestrated his attacks with the aim of providing a road-map for others planning similar terrorist operations, the US court filings said.

‘Looking to Russia with hopeful eyes or any land that despises the west’s liberalism,’ he wrote in the draft email. 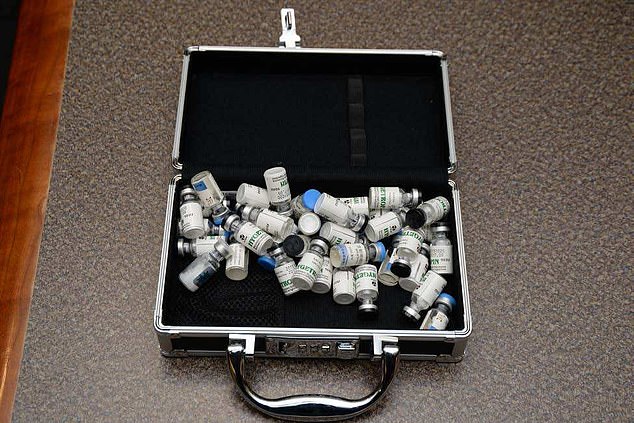 Law enforcement found a container with more than 30 bottles that were labeled as human growth hormones (above) during a raid on Hasson’s apartment. They allege that he was taken the drugs because Norwegian terrorist Anders Behring Breivik had taken steroids and narcotics because he believed this would heighten his abilities to carry out attacks 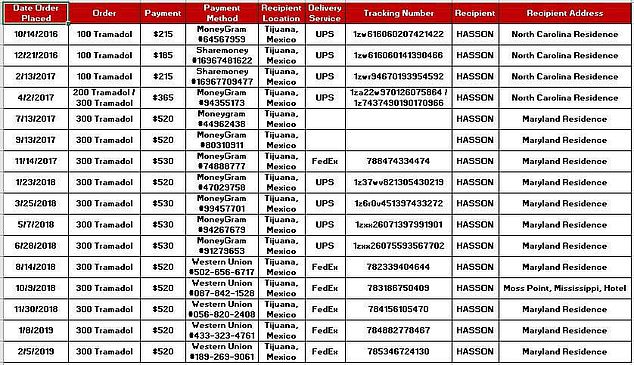 Hasson appeared to be a chronic user of the opioid painkiller Tramadol and had ordered more than 4,200 pills from Mexico over a three-year period. Pictured is a screenshot of his order history that was included in court documents

Prosecutors say during the past two years Hasson had regularly searched online for pro-Russian as well as neo-Nazi literature.

The Norwegian terrorist, Breivi, had taken steroids and narcotics – and Hasson believed this would heighten his abilities to carry out attacks.

When law enforcement raided his apartment, they allegedly found a container with more than 30 bottles that were labeled as human growth hormones.

Hasson also appeared to be a chronic user of the opioid painkiller Tramadol and had ordered more than 4,200 pills from Mexico over a three-year period.

According to court documents, authorities found Tramadol in his desk at work and observed him on surveillance taking some of the pills just days before his arrest.

He had also  purchased a flask filled with four ounces of ‘synthetic urine’ online, prosecutors said. Authorities suspect Hasson had purchased fake urine to use in case he was randomly selected for a drug test.

Hasson had been working at the US Coast Guard headquarters in Washington since 2016.

He also served in the US Marine Corps between 1988 to 1993 and in the Army National Guard for about two years in the mid nineties, according to court documents. 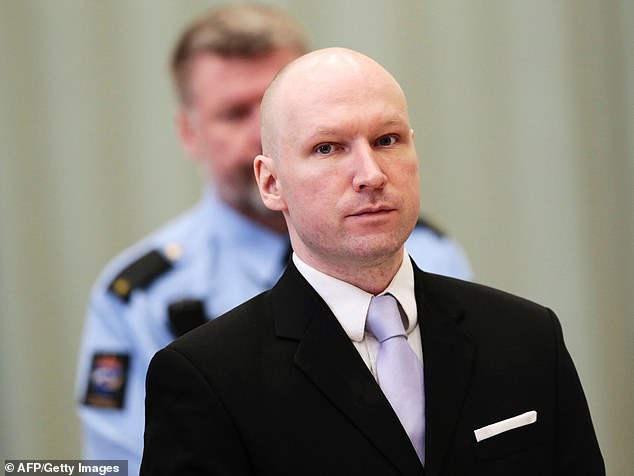