March 1997 – The affair ends, according to Lewinsky. She said they had engaged in sexual encounters on nine occasions

January 7, 1998 – Lewinsky signs an affidavit stating that she never had a sexual relationship with Bill Clinton. This was at the request of attorneys representing Paula Jones, who had accused Clinton of sexual harassment in 1994

January 17, 1998 – News of the scandal first breaks on the Drudge Report

January 21, 1998 – The Drudge Report publishes allegations that Lewinsky had kept a ‘garment with Clinton’s dried semen’. The story is picked up by major news outlets

January 26, 1998 – President Clinton denies the affair while standing with his wife Hillary at a White House press conference. He says the famous line: ‘I did not have sexual relations with that woman’

January 27, 1998 – Hillary Clinton appears on the TODAY Show where she defends her husband and calls the claims ‘a vast right-wing conspiracy that has been conspiring against my husband since the day he announced his run for president’

February 6, 1998 – President Clinton says in a press conference that he will not resign from office

August 3, 1998 – A blood sample is taken from President Clinton for DNA testing against stains from Lewinsky’s blue dress

August 6, 1998 – Lewinsky begins to testify before the grand jury

August 17, 1998 – Clinton testifies to the grand jury where he admits to ‘inappropriate intimate contact’. He speaks to the nation in a televised address, finally admitting that he had a relationship with Lewinsky 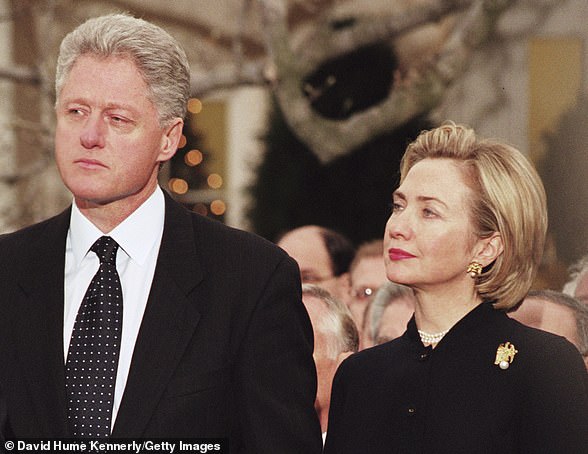 December 11, 1998 – The House Judiciary committee votes to impeach, approving two articles of impeachment, including lying to a grand jury and obstruction of justice

December 19, 1998 – The House of Representatives votes to impeach President Clinton. Clinton vows to remain in office until ‘the last hour of the last day of my term’

January 7, 1999 – The Senate begins its trial of President Clinton

February 12, 1999 – The Senate acquits President Clinton on both charges of perjury and obstruction of justice