A documentary producer and editor who worked on the likes of Cocaine Cowboys, The Tanning of America and Dawg Fight took pictures of the MAGAbomber’s ‘disturbing’ van that was parked outside a Jewish grocery store for a year.

For many conspiracy theorists, the vehicle – which may have been where Cesar Sayoc made the pipe bombs he sent to Democrats he regarded as enemies to President Donald Trump – was a Hollywood construct.

But David Cypkin shared snaps Friday displaying the date and location that might just prove the theory that people are out to unnecessarily connect Trump to the suspicious mailings untrue. 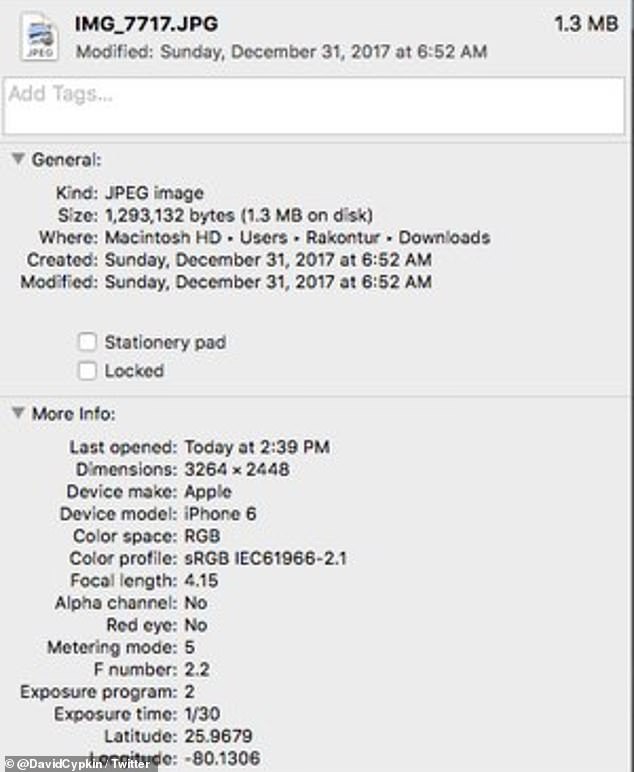 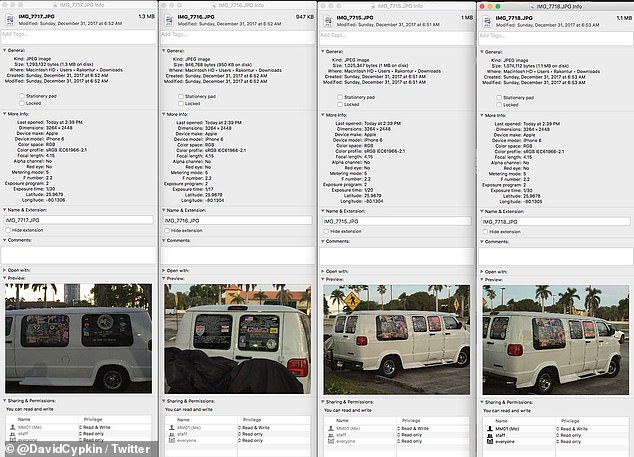 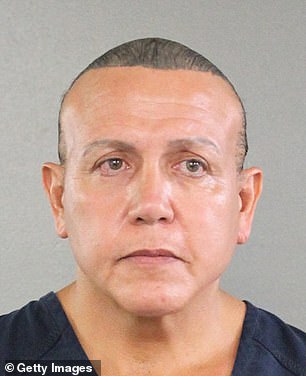 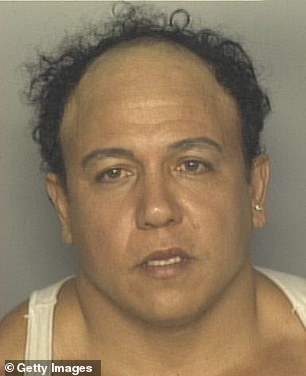 Sayoc (in undated mugshots left in Miami and right in Boward County) was taken into custody and charged in connection with the mail bombs.

At the request of Twitter users, Cypkin posted the metadata details of the photographs he took December 31, 2017 after noticing it had been parked in front of the Sarah’s Tent store in his neighborhood in south Florida for months.

He last saw it there in July 2018 and moved homes the following month so it possibly parked outside the kosher market from time-to-time for much longer.

Many other people have shared their images of the van after it was towed from the town of Plantation Friday when Sayoc was taken into custody and charged in connection with the mail bombs. 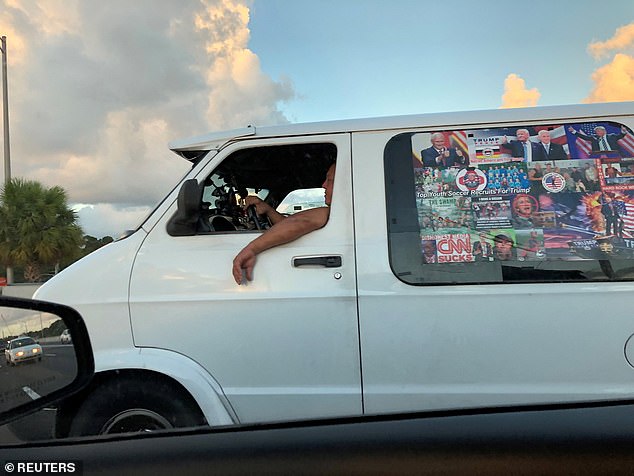 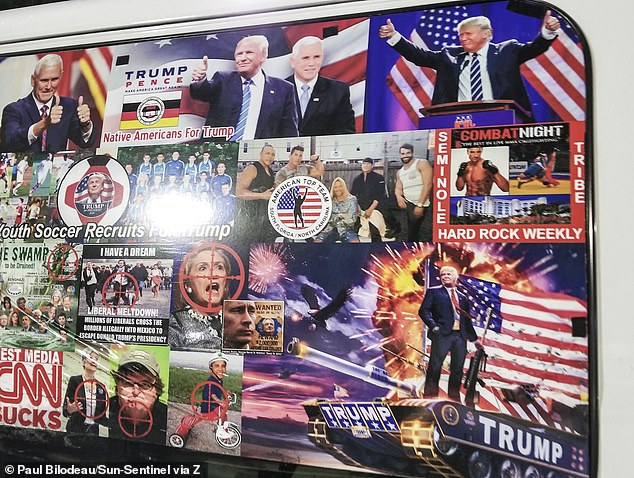 Cesar Sayoc’s van covered in pro-Trump and various other right wing stickers was pictured by Paul Bilodeau outside a Publix gas station in Oakland Park on October 18, 2018 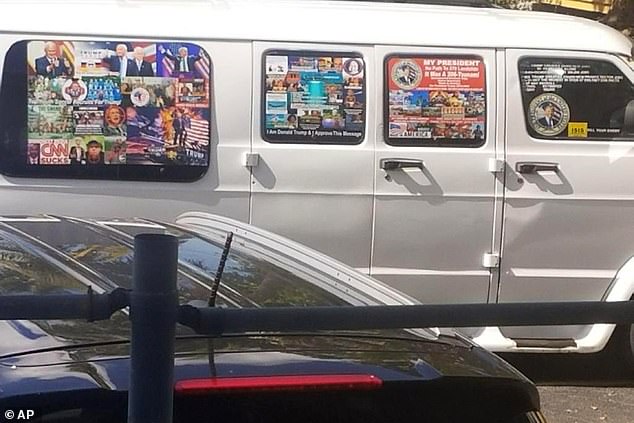 Another photo shows the van’s windows covered with an assortment of stickers in Well, Florida November 1, 2017

Cypkin mentioned in a tweet that it usually seemed occupied as the ‘back door ajar and/or window cracked open’ was a regular sight.

He revealed although he never got a good look at the person inside, he often did glimpse and ‘older man’ and steered clear.

‘I figured a guy who would have a van like that might be looking for problems and might have a couple problems,’ he told The Wrap. ‘The crazy stickers covering the windows struck me.’

While some tweeted pointed out that the metadata on his images could have been changed, Cypkin maintained he was telling the truth.

‘I would say to these conspiracy-minded people that everyone’s entitled to their perspective and their own opinions, but you’re not entitled to your own reality,’ he said.

Sayoc, 56, is a registered Republican with a lengthy criminal record living in Aventura, Florida, who aired some of his radical views on Twitter.

He made threats to well-known personalities via social media and addressed packages containing pipe bombs to the likes of former President Barack Obama, former First Lady Hillary Clinton and CNN.

The theory had been making the rounds helped by several major Conservative personalities, including a number of radio hosts.

‘MAN AND VAN LOOK LIKE CREATED BY HOLLYWOOD,’ Michael Savage tweeted Friday, seemingly suggesting that Democrats – a party significantly funded by wealthy members of the film industry – may have constructed the idea of the bomber. 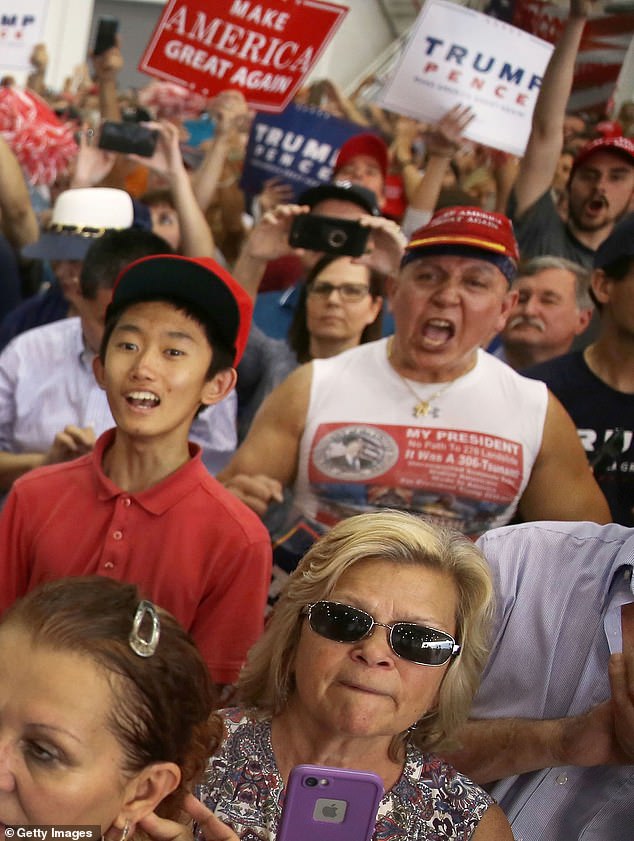 Sayoc (far right in red hat) is seen as President Donald Trump speaks during a campaign rally at the AeroMod International hangar at Orlando Melbourne International Airport on February 18, 2017 in Melbourne, Florida