Cocaine users are risking brain damage because their supply is frequently cut with a toxic substance used to treat de-worm animals.

Typically, the drug that’s sold on the streets is mixed with other agents such as local anesthetic agents, painkillers and caffeine.

But Swiss researchers discovered increasing quantities of European and US batches contain the potentially-fatal levamisole.

It’s not fully understood why the material is used to bulk the illegal powder, but it’s assumed that it may increase or prolong the effects.

Danger: Cocaine users are risking brain damage because their supply is frequently cut with a toxic substance used to treat de-worm animals

Worryingly, levamisole can lead to severe side effects such as changes to blood counts and blood vessels.

Based on this, scientists at the University of Zurich analysed hair follicles of around 150 people, who were split into three groups for tests.

Their results were then compared to those of a control group who had not taken any cocaine at all.

As expected, the cocaine users performed worse than non-users in all areas – attention, working memory, long-term memory and executive functions. 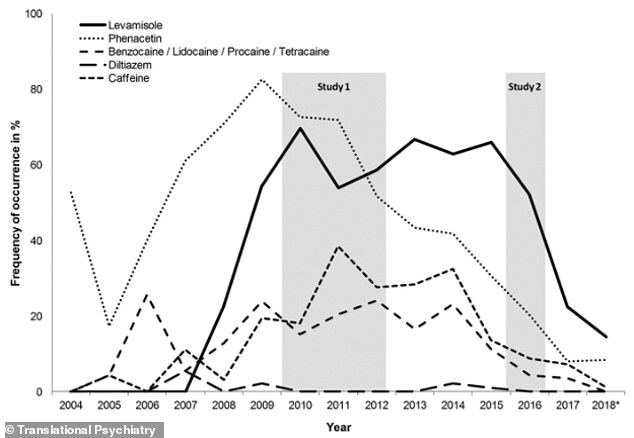 Swiss researchers discovered increasing quantities of European and US batches contain the potentially-fatal levamisole (pictured, what cocaine is cut with in Switzerland)

Deaths from cocaine use has almost quadrupled in seven years.

There were 432 deaths related to the drug in England and Wales in 2017, compared with 371 the previous year and 112 in 2011, figures from the Office for National Statistics revealed in August.

The number of deaths from the drug has increased for the sixth year running, with 7.5 deaths per million population, last year.

The UK has a higher rate of cocaine use than anywhere else in Europe, with 9.7 per cent of people having reported using the drug.

But those who had consumed cocaine that contained a high level of levamisole showed even greater impairment in their executive functions.

This was despite them having taken the same amount of cocaine.

In a second, independent study, the researchers used magnetic resonance imaging (MRI) to find out whether there was also a difference in the brain anatomy of people who consumed cocaine containing a higher or lower proportion of levamisole.

The same effect was seen. People who consumed cocaine with a high levamisole content clearly displayed a thinner prefrontal cortex – the area of the brain associated with executive functions.

Professor Boris Quednow, the research leader, said the functional and structural changes observed in the brain clearly indicate that levamisole could have a toxic effect on the brain for cocaine users.

‘We can assume from our findings that it is not just cocaine that changes the brain, but that the adulterant levamisole has an additional harmful effect,’ he said.

‘The sorts of cognitive impairment often exhibited by cocaine users may therefore be exacerbated by levamisole.

‘Such programs mean users can have their drugs tested for purity and therefore avoid taking cocaine that has very high levels of levamisole.’

Figures in the US show around 1.5 million people use the illegal drug each year.